Even though Babu glided the large bamboo stick into the shallow waters as silently as possible, the animal allowed us but a momentary glimpse before it quickly disappeared into the dense reeds. Somehow, within those few seconds, we had reached within two metres of it and, in the soft moonlight, we could identify that it was a large, adult male fishing cat. The image of this encounter stayed in my mind – the round, striped head, two big burning eyeballs, which were too close-set and peculiar for a cat, and the prominently muscular chest. Renowned British naturalist S.H. Prater had noted that its strong paws could even kill a leopardess.

We were navigating up a shallow creek around 8 p.m. Using a thick bamboo stick to thrust the boat forward requires a strong arm and powerful lungs, but this night, a strong breeze blowing in from the Bay of Bengal lightened the labour as the boat moved swiftly but gently towards the village. We were in the midst of what is probably one of India’s largest marsh expanse, both broken and connected with narrow, shallow channels. We were travelling back with the camera traps that had been set a fortnight ago at the end of the channel where the marshes open into deeper Chilika.

Babulai Behera, aka Babu, a seasoned son of the waters with whom we could easily tread the lagoon, was cheerfully effervescent. Just two hours ago, in the beautiful golden light that followed a glorious sunset, the camera traps were retrieved and placed securely in the boat. Babu was conversant with the traps by now and had already sifted through the pictures, which had undoubtedly charged him up. He, who otherwise worked according to the whims of his mood, was bubbling with infectious energy – “we will see a fishing cat today!” And so, we did – three individuals on either side of the bank! Kaloshi Behera, a local fisherman, was right all along. He had reported seeing many of them here along with the otters.

Do All Wetlands Harbour Fishing Cats?

The fishing cat is an enigmatic creature. Not much is known about it, except that it is well adapted to wetland environments and that it loves fish! But there are many types of wetlands – a flowing waterbody that has fish is a wetland, so is an ox-bow lake, which is on the verge of or has already terminated its connection with the main river channel. Do all wetlands harbour fishing cats? 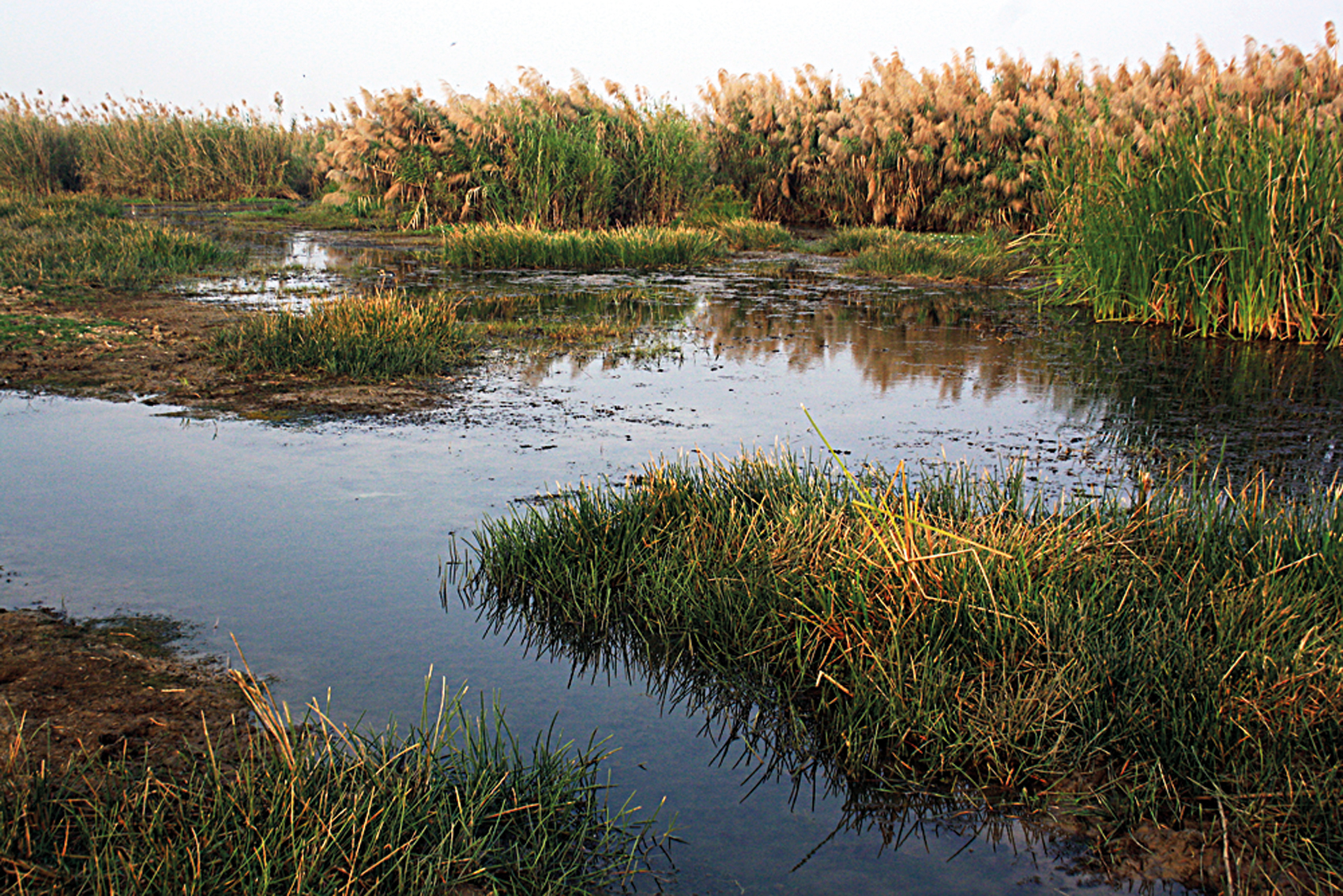 In the words of a naturalist – where there is fish, there are fishing cats. But then why does the cat occur in only a subset of the range occupied by the smooth-coated otter? After all, the latter is also known for its strict wetland adherence and a palate undoubtedly biased towards fish as well! In effect, what is that unique combination of factors that maintains a balance for a species to persist and proliferate in? Much like mathematicians, ecologists too try to inch closer to the absolute truth, but in essence we know that the journey is never ending. We earn nuggets of wisdom everyday as we move along.

While the Earth has been subject to much change, altering and shifting patterns towards a newer dynamic, certain strong associations have either persisted or have been severed. Ecology is a search to understand these associations and learn how we are interconnected to the living systems. Chilika provided a unique opportunity to sense and empirically estimate at least some of the factors that make conditions suitable for the fishing cat.

While the freshwaters of the grand Mahanadi and a number of seasonal rivulets from the Eastern Ghats provide life to the lake, saltwater from the Bay of Bengal rushes in through the sea-mouth, and the concoction makes the lake brackish. An epitome of dynamicity, the lake not only has a gradient of freshwater and saltwater, but also different types of soil that surround it – from muddy to clayey to sandy. This in effect gives rise to plant forms that might or might not give our study species its refuge. So, there we were in Chilika, setting up traps, collecting scat and interacting with the indigenous fishing communities, the Behera, attempting to find the local connections based on which the fishing cat persists here. 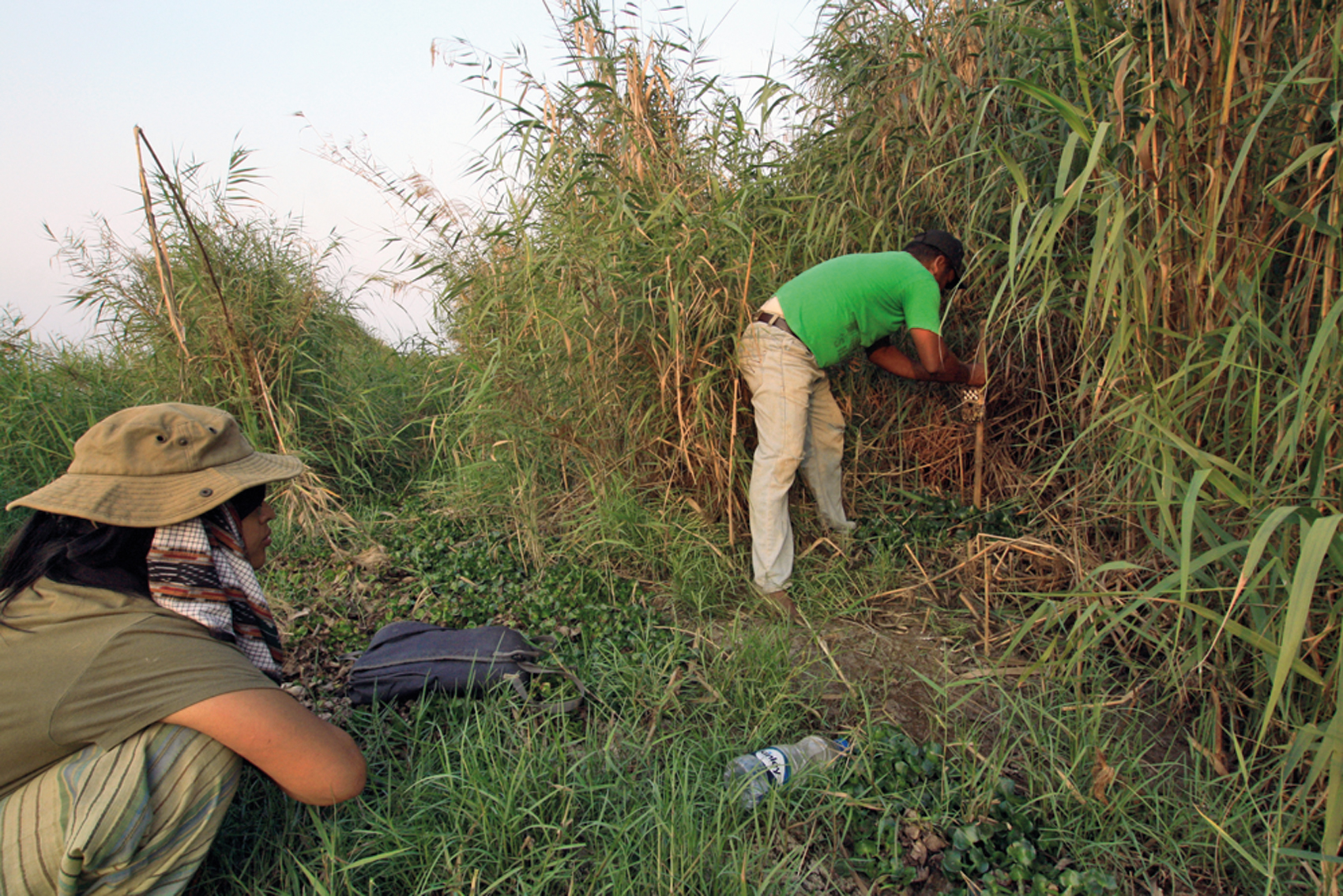 In addition to collecting scat samples and working with local communities, the author and her team set up camera traps to unravel the ecological imperatives of the elusive feline. Photo: Partha Dey.

Living with the Cat

My experience of living in the field has renewed my faith in our ability to live cooperatively despite our somewhat innate tendencies to compete and conflict. One day Baraju Behera, a fisherman who was our field expert guide, remorselessly emptied a fish basket that someone had set up in the marshes to catch fish. After walking through mud and wading through water, our hunger needed satiation and so we smoked the fish, sprinkled some salt and ate them with chilli and onion. Yet there was no guilt as this was not a theft. The belief is that nothing is really lost or stolen, only borrowed, and favours will be returned. Fisherfolk here have a certain understanding of their environment that one can only learn by being in their company. Take for example, their restraint to catch fish during the month-long breeding season – it’s a ritual. Living with the Behera provides glimpses into what ecologically harmonious living could look like. 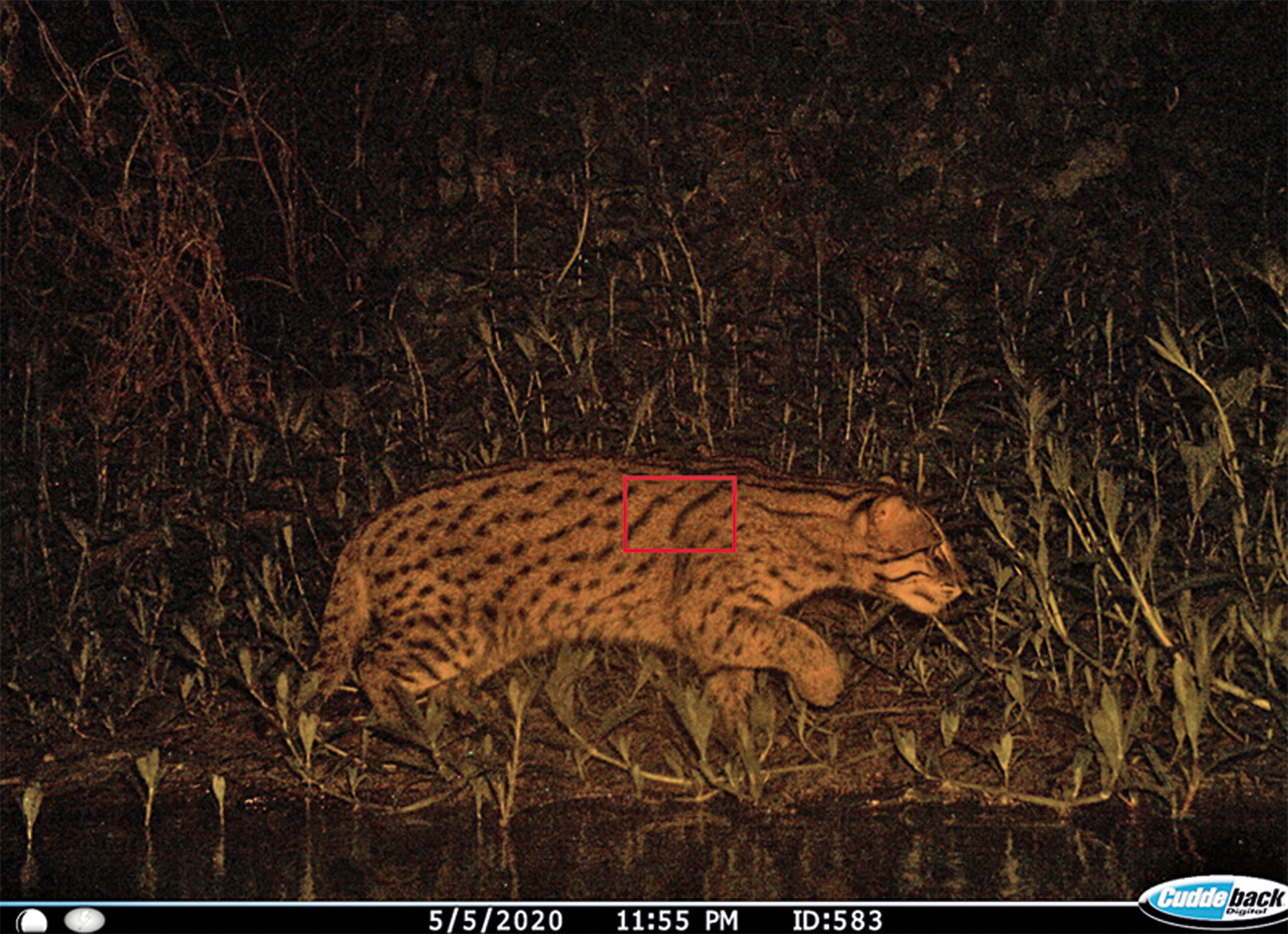 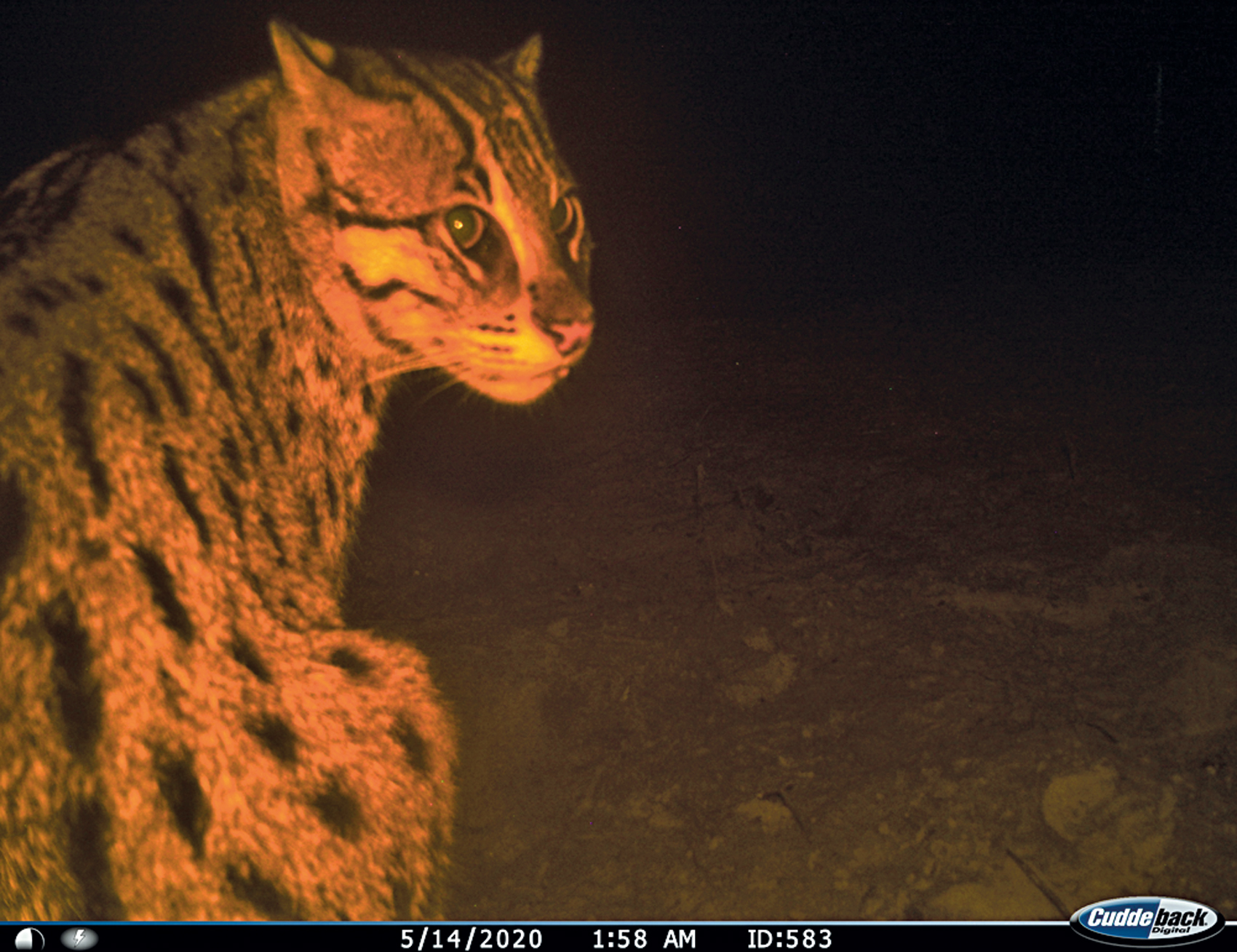 A significant breeding population of the fishing cat thrives around Chilika, particularly in the marshlands fringing its north and north-eastern aspects, a testimonial to the local Behera community’s nature-friendly lifestyle. But industrial aquaculture farms present a real threat as they ruthlessly excavate reeds and release lethal toxins into the waters. This poses a serious threat to the fishing cat’s future. Photo: Tiasa Adhya.

This way of life stands in stark contrast to the emerging, big aquaculture farms that are silently and cancerously pervading Chilika’s marshes today. An old fisherman who was habituated to sit in these marshes with his net to catch fish for the day is no longer allowed in. A little away on the big embankments one sees strategically erected buffalo sheds. Buffaloes do go into these wetlands, and in fact, as grazers, play a role in maintaining the wetland vegetation. But what are these herds doing in sheds placed far away from the villages in the middle of Chilika?

The Threat from Aquaculture

One day, while trying to find fishing cat scat along the embankment, our vehicle came across one of these sheds that was almost blocking the path. A little beyond, the wetland was being excavated. The tall, dense reeds were ripped off and the water had been drained out with large pumps. We learned that soon, the deep waters would fill the hollowed-out patches and fine strings would be strewn overhead. The old fisherman would be quietly threatened into staying away and the birds would be killed. Waste water and chemical run-off from the aquaculture farms would flow into Chilika. Our vehicle was stopped near the shed by some people who seemed to be well aware of the illegal and ongoing work and wanted it kept under wraps.

Yet with the establishment of each farm, the disease spreads across Chilika. The leafy vegetation just below the water surface, the flora that peeks out a little above, the blades of grass that stand tall with their horizontal roots holding onto the muddy substrata, are all lost. They connect the entire ecosystem in innumerable ways, holding nutritious seeds and thousands of crustaceans, molluscs, insects and sheltering fish. They welcome a grand spectacle each year – the descent of winter migrants such as the Godwits, Pintails, and Shovellers that feast on the bounty. Sadly, in the last decade, their voices are being increasingly muted. 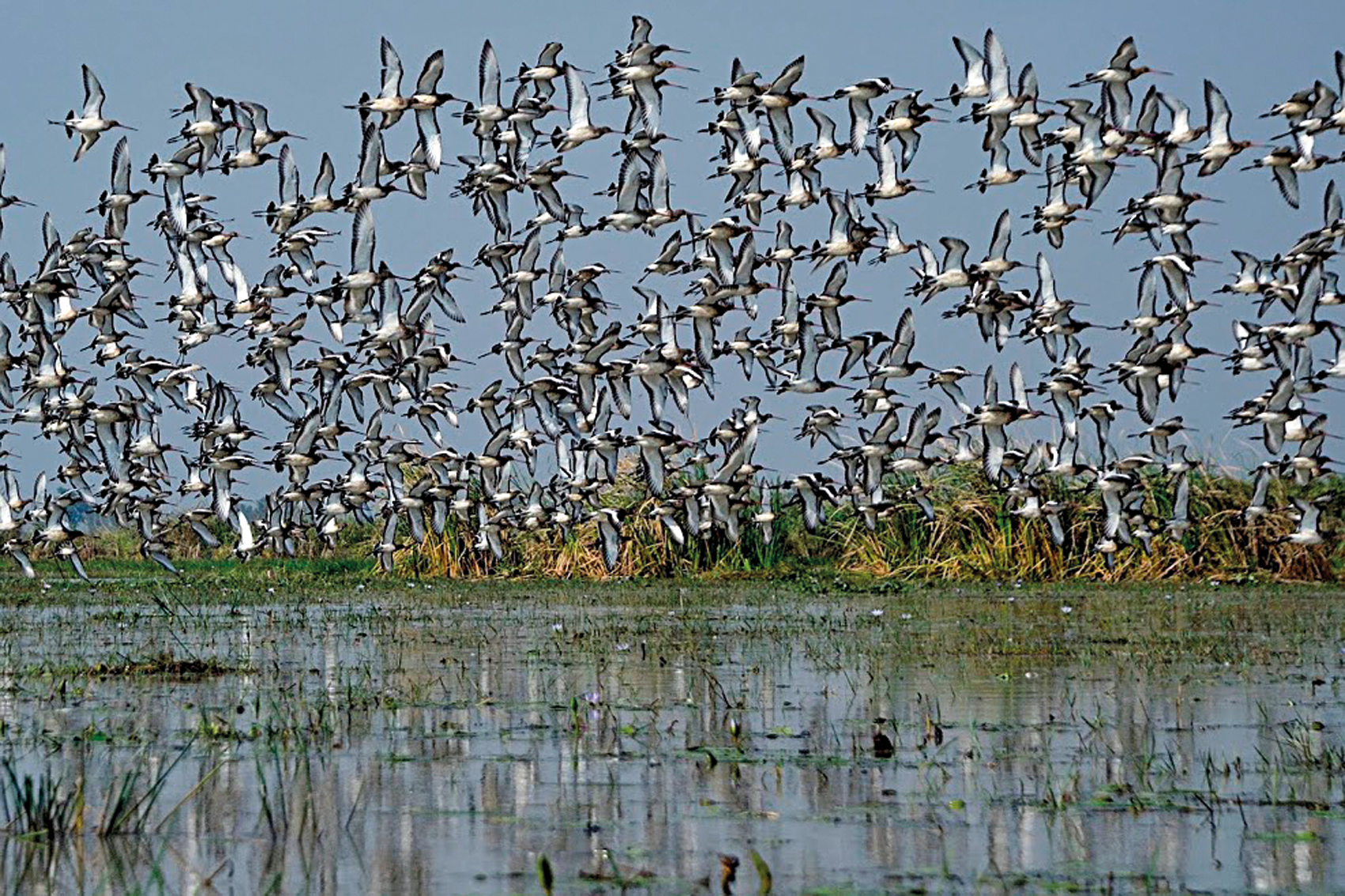 A stronghold for the fishing cat aside, Chilika is also home to the vulnerable Irrawaddy dolphin in India and the critically endangered Chilika limbless skink. A megadiversity of avifauna thrives here, including winter migrants such as Godwits (above), Pintails, and Shovellers. Photo: Mallar Sarkar.

The farms also rob an ecologist of the chance, and motivation, to study the primordial connections that bind us all together. What is left of the connections are snippets that the ecologist would puzzle over while attempting to gather empirical evidence to state the obvious – that large-scale wetland loss is happening. Even as we spread the news and try to stop the onslaught, we must also ask the right questions. Where did the food we buy in urban areas originate? Fish cultivation, which is killing Chilika, supplies my city Kolkata’s demand for fish. It was an unpleasant shock to perceive how viciously I stood connected to the species that gave me a purpose in life.

The good news is that all is not gone. This year the Chilika Development Authority (CDA), the guardian government body that looks after the health and well-being of the lagoon took stern action to break down the illegal farms. Furthermore, in October 2020, the CDA named the fishing cat as the ambassador for Chilika lake, and announced plans to manage the marshes with a socio-ecological approach involving local stakeholders and ecologists. For the time-being, atleast, the old fisherman can continue catching fish and the otters and fishing cats can prowl these enigmatic marshes.

The fishing cat Prionailurus viverrinus is found across wetland habitats in South and Southeast Asia including India, Nepal, Bangladesh, Pakistan, Sri Lanka, Myanmar, Thailand and Java. In India, the species has been recorded in the Ganges, Yamuna and Brahmaputra floodplains, the Terai Arc landscape, the Ganges-Brahmaputra basin and small coastal deltas along the eastern coast with southernmost populations recorded in the Godavari and Krishna.

The fishing cat is a Schedule I species as per the Wildlife (Protection) Act, 1972, and listed as Vulnerable on the IUCN Red List. The marshland and mangrove ecosystems, which are its prime habitat are in decline, taken over by industries, aquaculture, and garbage dumps, among others. The Coringa Wildlife Sanctuary, Andhra Pradesh (also known to be India’s second largest stretch of mangrove forests), which has an estimated population of 95-100 fishing cats, is protected. However, mangrove patches outside the sanctuary are threatened. We have lost 26 per cent of mangroves outside PAs in Andhra Pradesh due to ‘development’ projects and shrimp farms.

Tiasa Adhya is a researcher with The University of Trans-Disciplinary Health Sciences and Technology, a Wildlife Conservation Network scholar and co-founder of The Fishing Cat Project, Indian chapter of the Fishing Cat Conservation Alliance.