We had walked around a kilometre when Faltu kaka stopped abruptly and whispered, “woh dekho dooda.” I never thought it possible to fall in love at first sight. But I did, unable to take my eyes off the Forest Owlet staring solemnly at me from atop a teak Tectona grandis tree. For a moment, it tilted its head as if to size me up, and then regained its composure and continued staring intensely. The head tilt, I have always thought, is the most endearing quality about owls.

I was in the Melghat Tiger Reserve that chilly November 2003 morning, and accompanied as I was by one of the most well-known and knowledgeable Forest Department staff, I had had no doubt that I would spot the elusive bird. Learning from Faltu kaka and Nandram kaka in Melghat soon convinced me that their knowledge about owl ecology and the forests is unmatched and difficult to acquire by reading books or gaining a degree.

Since I embarked on my study on owls, I have begun to understand my cat better! In other words, owls are like cats with wings! Both are stealthy, sure-footed and clinophiles (sleep lovers).

My work with the Wildlife Research and Conservation Society (WRCS) in 2005 focused on the ecology of the Forest Owlet in the forests of Maharashtra and Madhya Pradesh. The main objective of our research was to study the key habitat requirements of the Forest Owlet and its co-existence with other owl species to better understand survival and resource sharing. These included smaller owls such as the Spotted Owlet, Jungle Owlet, Indian Scops Owl, and larger owls like the Brown Fish Owl, Mottled Wood Owl, Indian Eagle Owl and Barn Owl. While most of these are widely distributed in India, the Forest Owlet is found in smaller, isolated populations. 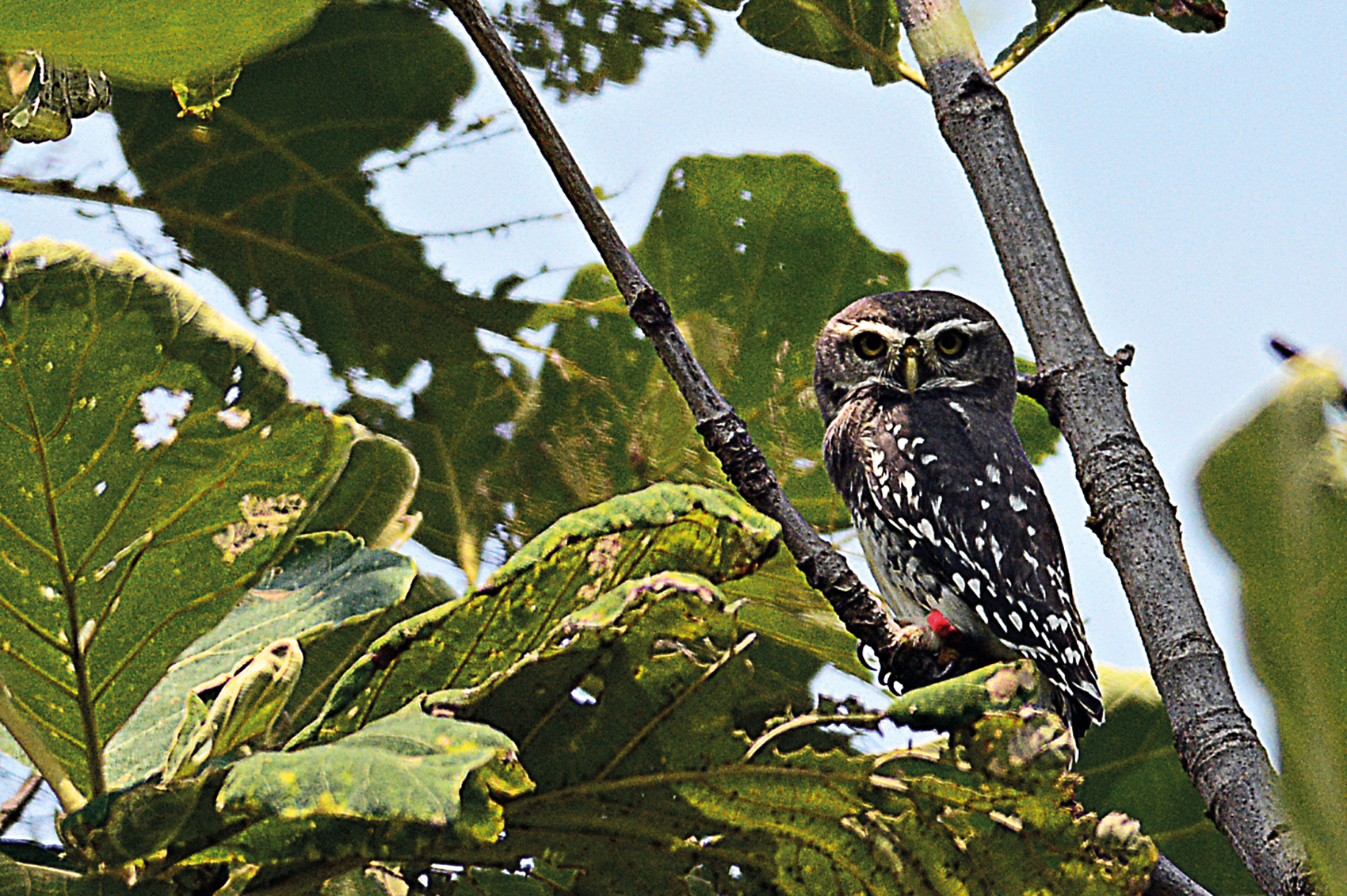 With no sightings since 1884, the Forest Owlet was considered extinct until it was rediscovered in 1997 by American ornithologist Dr. Pamela Rasmussen. Subsequent surveys found isolated populations of the species in Maharashtra, Madhya Pradesh and Gujarat. During the study of Forest Owlets in Maharashtra and Madhya Pradesh, colour bands (as seen on this female) were used to differentiate the species from the similar looking Spotted Owlet, and to track individual birds and their behaviour. Photo:Prachi Mehta

The breeding season is the best time to hear them. The male begins wooing the female by offering her gourmet prey of rodents, shrews, lizards and snakes. If the female accepts the gift, then they form a pair. If the gift is rejected, then the dejected male gobbles the prey himself and tries his luck elsewhere. Successful pairs house hunt together and once the female approves, nesting ensues. Most owl species pair for life, but there are a few ambitious males who mate with more than one female.

The teak forests of Central India comprise the most extensive habitat for the Forest Owlet. Smaller owls nest in tree cavities excavated by woodpeckers and barbets. Choosy about their homes, owls need a specific carpet area. Some such as the Spotted Owlet, Indian Scops Owl and Barn Owl live in joint families that need larger cavities. Forestry operations and wood cutting results in the loss of such nesting trees. Our research findings allowed the Forest Department to take specific actions to protect identified nesting and roosting trees.

The Forest Owlet has strong competition from other cavity nesters, such as parakeets, Common Mynas, treepies, and even palm squirrels. The nesting season begins in November and lasts until February, when fledglings emerge. This is when eggs and chicks are at risk of predation by snakes, other birds and small mammals. Camera traps serve as a useful non-intrusive method of monitoring predation attempts during the breeding season.

One of the Rarest Owls
Endemic to Central India and found nowhere else in the world, the Forest Owlet Heteroglaux blewitti finds a place in the 17 avian species considered most at risk of extinction. The IUCN has granted it ‘Endangered’ status. Initially placed in the genus Athene, it was later awarded its own genus Heteroglaux due to differences in morphology. Unlike its counterparts, the Forest Owlet is diurnal and hunts prey that live in the understory, like lizards, other smaller birds, rodents and invertebrates. At first glance, it may look similar to the Spotted Owlet, for which it is often mistaken. At closer inspection, one can distinguish the two – the Forest Owlet has an unspotted crown, a full throat collar and thickly feathered legs, unlike the Spotted Owlet. Additionally, its distinctive behaviour contributes to the assignment of its own genus – like the habitual flicking of its lateral tail and undulating flight pattern. The Forest Owlet is highly threatened by loss of its deciduous forest habitat to illegal logging and ever-expanding agriculture.

Nuts and Bolts of Studying Owls

Monitoring owls is a tricky business, particularly when all individuals of a species look near-identical. To keep track of individual birds, we took to colour banding, one of the oldest and most efficient techniques of identification. In the early 1800s, John James Audubon tied threads to bird legs to identify individuals that visited his farm. In 1902, the first scientific study to use bird banding was carried out on Black-crowned Night Herons at the Smithsonian’s National Zoo in Washington, D.C. Colour bands, which can stay on the birds for years, can be placed on the legs, neck, wings or tail feathers. We recorded a young male that had been banded four years earlier travel up to six kilometres to mate! In another instance, a banded male was recorded pairing with two different females a kilometre apart… providing paternal care to both sets of chicks. While such data makes a case for the importance of colour banding, it also calls for applauding the male’s dedication as a good father.

When one looks at Forest Owlets and Spotted Owlets, it’s next to impossible to identify their gender. But differently coloured bands around the leg of the male and female makes identification easy.

Our coloured bands also included different patterns for each bird, which helped identify the bird and its original location. Much like an identity card.

The Case of the Missing Owlet
The Forest Owlet debuted in Indian ornithology in 1872 from the Basna forests in eastern Madhya Pradesh. It is also known as the Blewitt’s Owl in honour of its discoverer, F.R. Blewitt, an Irish officer who served in India. From 1872 to 1884, seven specimens of the Forest Owlet were collected from various parts of India. But after 1884 for 113 years, there were only a few reports of the Forest Owlet, and a chunk of these were cases of mistaken identity with the Spotted Owlet. From the mid 1950s till 1970s, several searches for the bird were conducted, including in the Melghat Tiger Reserve, but were unsuccessful. Finally, in 1976, Dr. S. Dillon Ripley voiced the possibility that the Forest Owlet may have gone extinct in India and it was deemed a possibly extinct species.

One can imagine the euphoria at the news of its rediscovery in the semi-open forests of Shahada, Nandurbar district in northwestern Maharashtra in 1997 by Dr. Pamela Rasmussen and her colleagues from the Smithsonian Institute, U.S.A. Interest in the bird was revived. At this time, several organisations in India, including the Bombay Natural History Society, WRCS, Sálim Ali Centre for Ornithology and Natural History, Wildlife Institute of India, and others carried out surveys in various parts of the country to determine its distribution. At present, confirmed populations of the Forest Owlet are known to occur in Nandurbar District, Melghat Tiger Reserve, Nasik District and Tansa Wildlife Sanctuary in Maharashtra, Khandwa, Burhanpur and Betul Districts of Madhya Pradesh, and Purna Sanctuary, Navsari District and Valsad District of Gujarat.

In our Madhya Pradesh study, we also radio-tagged a few Forest Owlets to understand their habitat use. We found that the female preferred to hunt near agricultural fields, while the male would explore further areas in the forests. In our forthcoming study, we intend to radio-tag more owls, which we hope will help the Forest Department plan site-specific conservation action. 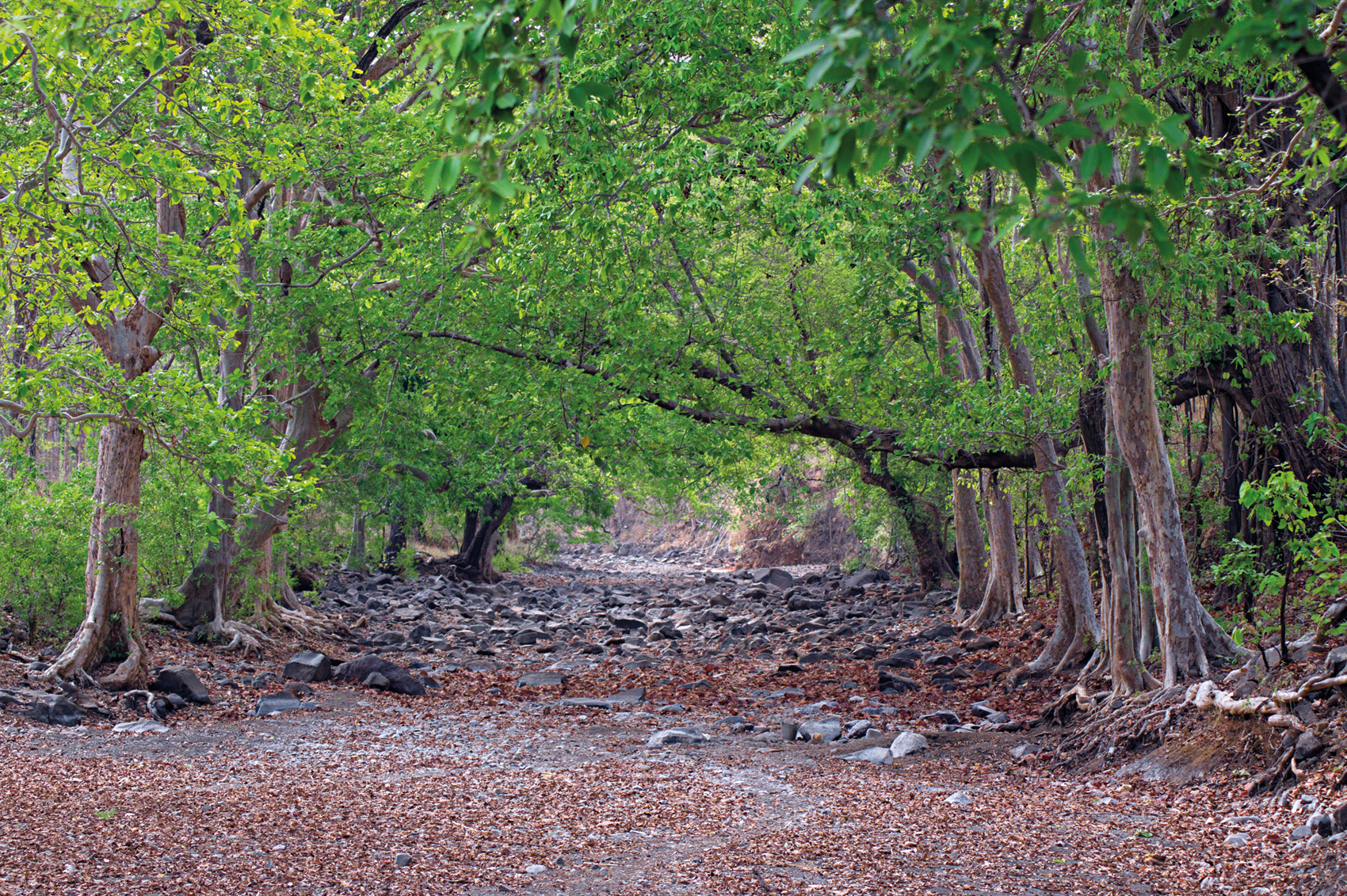 The dense old-growth deciduous trees of the Melghat Tiger Reserve provide suitable nesting cavities for the Forest Owlet, making it one of the few stronghold habitats for this endangered species. Photo:Pranil Borkar/Public Domain.

Owls don’t defecate undigested food like other birds. They swallow the prey almost whole, then orally eject the undigested material as a small pellet. For researchers, discarded pellets are a prized find. Their pellets help us understand their food preferences. The modus operandi involves painstakingly separating identifiable remains such as skulls, jaws, limbs and back bones of vertebrates, and the carapace and limbs of insects.

Pellet dissection, though tedious, provides valuable information. We discovered that though all owl species may hunt in the same area, their food choices differ. Individuals choose prey of different sizes and species, which clearly reduces competition between individuals. Dr. Shyamkant Talmale from the Zoological Survey of India helped us prepare a unique technical manual to identify different prey types consumed by the owls. 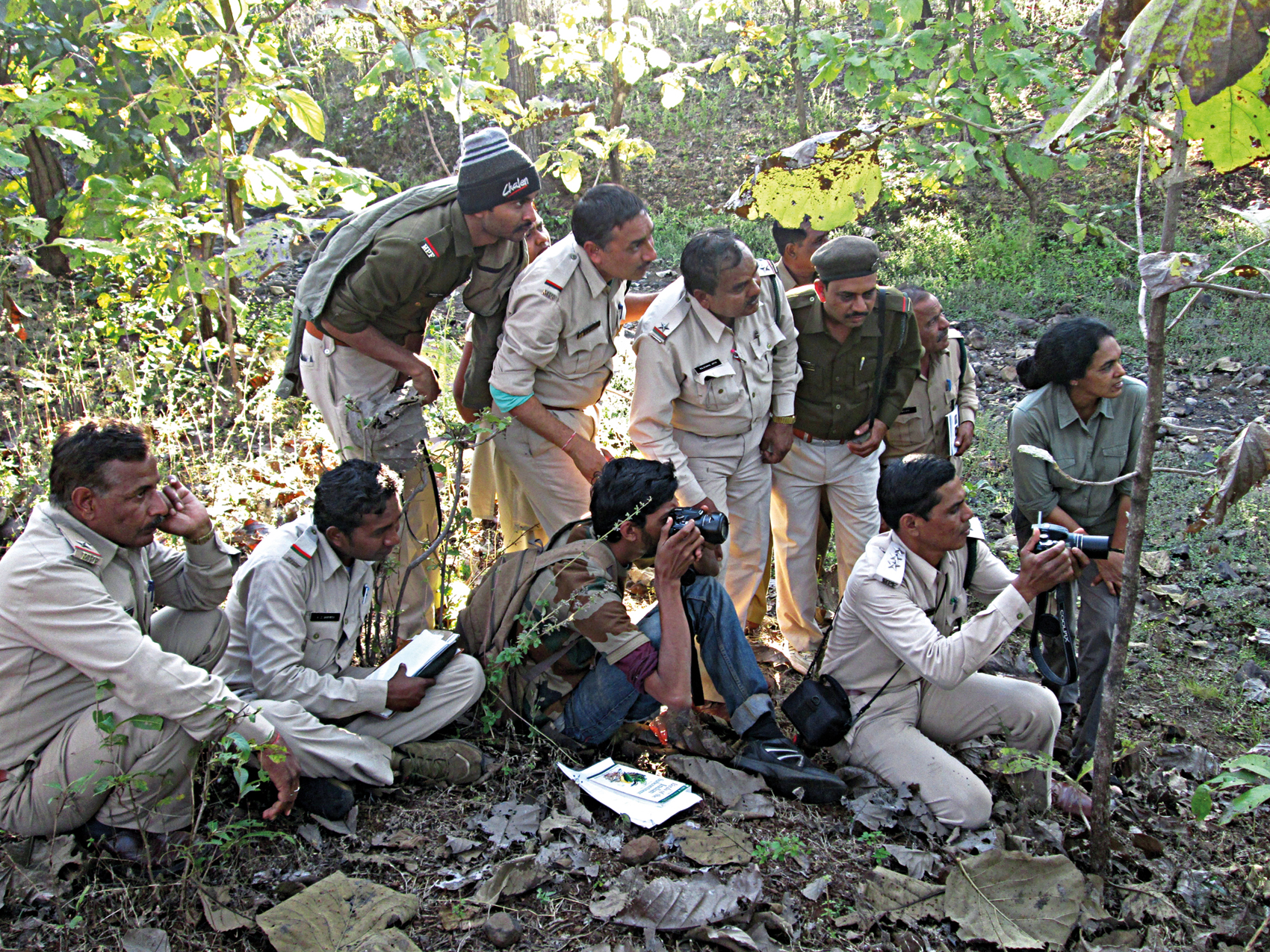 The Central Indian forests are inhabited by Korku and Gond tribes. Living in remote forests areas, they have limited livelihood options. To seek their participation in owl conservation, we initiated an incentive-based programme that trained them in making owl-shaped bamboo products sold as souveniers, including T-shirts, key chains and coasters. Handstitched owl appliques worked well on tote bags and cushion covers. It may not seem much, but these new sources of income helped build community support for owl conservation.

There is still much to be studied about the habitat requirements of owls, and how they survive the trials of life, most serious of all being habitat loss. I can’t say the process has been entirely without its stresses and challenges, but I love wildlife research, and every time I see an owl close up… that excitement wells up inside me, the way it did when I saw my first Forest Owlet.

And everything seems worthwhile. 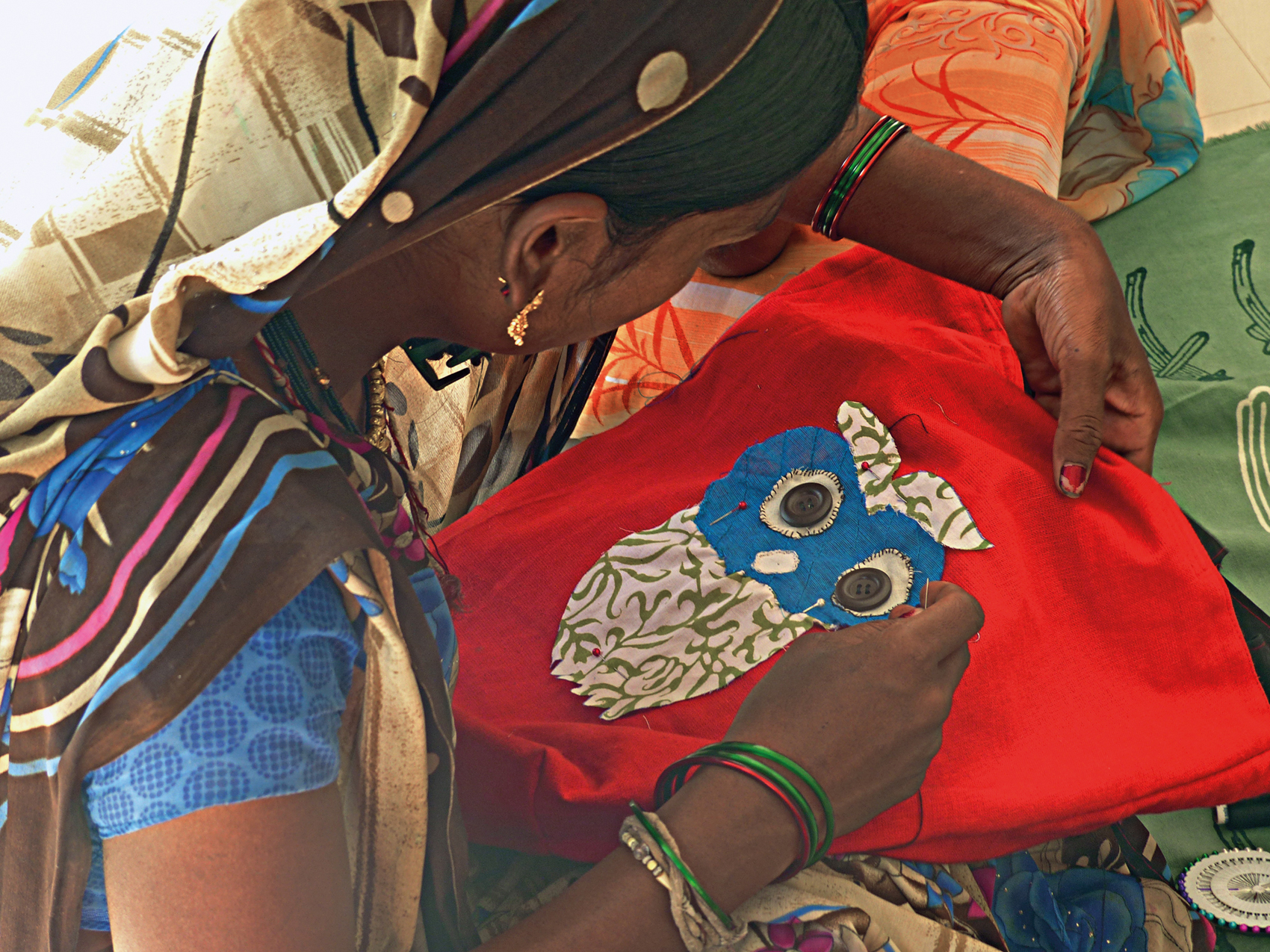 To foster the cooperation of the Korku and Gond tribes that share the forests with the Forest Owlet, an incentive-based programme trains community members to make and sell handmade tourist souvenirs such as bamboo products, tote bags, cushion covers, and more. Photo:Prachi Mehta.

(The Owl Ecology Project is supported by the MoEFCC, Raptor Research and Conservation Foundation (RRCF), Mumbai. This is a collaborative project of the Madhya Pradesh Forest Department, Maharashtra Forest Department and the Melghat Tiger Reserve.)

A senior scientist and Executive Director of the Wildlife Research and Conservation Society, Pune, Dr. Prachi Mehta has been studying the Forest Owlet in Central India for several years.