The Forests in Exile

It was our second day in Bastar, and the second day of not being able to go where we wanted. We couldn’t do much more than visit officials, who have seen the forests in the region, at the district headquarters in Jagdalpur. As I stared at the thick tome of official wildlife census records in front of me, I realised how this Dandakaranya still remains a mystery and myth to most of us.

We were a group of four researchers from the Ashoka Trust for Research in Ecology and Environment, Bengaluru, working at the trijunction of the three states of Andhra Pradesh, Odisha and Chhattisgarh. We had this yearning to visit the fabled forested tracts of Bastar in southern Chhattisgarh and had decided to cross over the border to take the first steps towards some of the destinations we wanted to visit, but it wasn’t turning out to be easy.

The day we arrived in Bastar, incidents of armed violence had occurred. The latest in a series of conflicts that has haunted the area for over two decades. No soul was ready to let us put a foot in the dreaded forests. As we sat there chatting with the Forest Department officials, my eyes were still gleaning through the census records. Wild water buffalo, wolves and other majestic beings dwelled in this forest. We needed to get at least a glimpse. “So, do you think we can go to this particular forest patch from here?” we asked, tracing our fingers across the yellowing map to the vast and seemingly uninterrupted patch of green spread along the border of Chhattisgarh and Maharashtra. The officer looked back at us surprised and then with a sheepish grin replied, “We haven’t been there ourselves for several years now. It is just not possible.” We discussed further to try and understand the issues that had led to this situation where the forests were simply beyond the reach of outsiders. The official could clearly see the disappointment on our faces and suggested instead, “Since you are already here, why don’t you make a trip to the Kanger Valley? That you can easily do.”

A forest where a Bird is King

As we walked out of the office, we discussed the possibility of hiring a car and visiting nearby areas. It seemed that the Kanger Ghati National Park was the only safe haven for us during these troubled times.

We left in the cold morning mist the next day. The entrance to the Kanger Ghati National Park is just 30-odd kilometres to the south of Jagdalpur. The road to Kanger Valley goes through some small settlements and then quickly enters a small ghat that leads to beautiful dense forests. Several streams, the limbs of the Sabari river, which meanders down the Eastern Ghats from Odisha, run along the road, at times crisscrossing the path beneath small bridges. The rivers and streams in this region form some of the most beautiful waterfalls in the country. The river Kanger from which the park gets its name, flows along the length of the Protected Area, creating a long valley through which it tumbles. We decided to start our trip with the famous Tirathgarh falls that are on the boundary of Kanger Valley.

The forests of Bastar are thought to be the Dandakaranya in which Lord Rama spent 14 years of his life in the famous Sanskrit epic Ramayana. Many devotees still trace the path supposedly taken by Rama in these forests and it is quite often that you see boards and little shrines depicting the story near important tourist spots. I wondered at how this connection to the Ramayana made these forests seem ancient, and somewhat unreal. But a hoarding at the falls brought me to the present. It was a big board with ‘Bastar Hill Mynah’ written in large letters and a mug shot of the Hill Mynah next to it. This bird seemed to be the main attraction of the Kanger Valley National Park. At that time I did not know that this was a variety of the Hill Mynah endemic to this region. With a smile I admired the stark contrast to other Protected Areas in the country where the hero is usually a large mammal and not a rare, noisy bird. However, though we had seen ample Hill Mynahs in the Eastern Ghats, the Bastar variety proved difficult to spot. 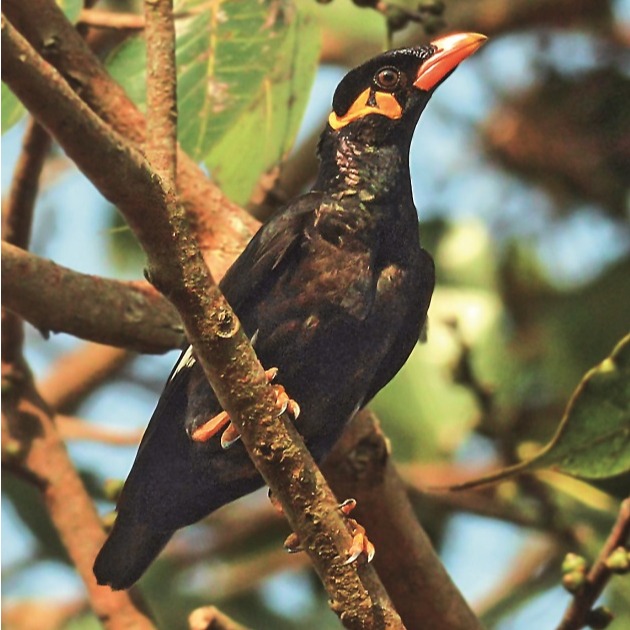 Chhattisgarh’s state bird, the Bastar Hill Mynah is the star attraction of the Kanger Valley National Park. It is covered in jet-black feathers and in a striking contrast, has bright yellow wattles or patches of naked skin on the sides and nape of its head. Photo Courtesy: P.R.S Negi

Of waterfalls and caves

As we followed the path to the waterfalls we realised that the site is completely surrounded by thick foliage. The beauty of the falls was striking! Throughout Kanger Valley, there are these rock formations made of shale that reach astonishing stature with layers upon layers of rock sheets. The Tirathgarh waterfall drops water from a height of almost 100 m. on such huge rock formations; the result is a hundred smaller waterfalls gathering in a pool lined by sharp rocky steps. The visitors, mainly composed of devotees, get blessings from an old temple adjacent to the waterfalls. Rejuvenated by the site of vegetation and falling water, we continued our journey into Kanger Valley.

Back on the route, the path was bordered by tall teak and Terminalia trees. We couldn’t stop the urge to venture deeper into the forests and so asked our driver to wait for us a few bends ahead. His face reflected concern as we entered a small trail next to the road. Less than an hour’s walk through tall trees and across streams rewarded us with bird sightings such as the unexpected Forest Wagtail, some raucous orioles, the colourful minivets and a few dainty flycatchers. Back on the main road, we found our car and an anxious driver, who heaved a sigh of relief on our appearance.

The next stop was at the junction where murram roads through the forest lead to the numerous limestone caves within the national park. We decided to visit the Kotumsar caves. The red soil roads leading to these destinations proved to be a visual treat as Emerald Doves and Oriental Turtle Doves frequently zipped across the path or even landed right in front of the vehicle to peck at the ground. Once known as Gopansar caves or the hidden caves, the Kotumsar caves were discovered just over a hundred years ago. New extensions of the cave are still being explored. The entrance to the vast serpentine cave is just a hole in the wall that you have to slide through. Since there is a cement path built by the authorities now, it is quite easy to walk through the maze of speleothems (stalactites and stalagmites). In fact, it is probably the most famous cave in Chhattisgarh, as adventurers and pilgrims alike are drawn to its pitch dark corners that hold unique biodiversity and elegant speleothems. The caves are known to be populated by a cave-adapted form of Indoreonectes evezardi, a ray-finned fish. And like some of the other limestone caves in our country, this cave also has as a huge speleothem that people worship as a Shivalinga. People find their gods in the most inaccessible places!

Walking through the deep, dark tunnels with only our torches lighting up the incredibly beautiful limestone caves, we transcended into another world. It was meditative to be totally disconnected from life above ground! Climbing out of the narrow mouth of the cave, we winced in the bright daylight. But a revelry of birds in a nearby thicket shook us out of our stupour and the passage between the two worlds was made much easier! In a net of lianas, Black-crested Bulbuls, Grey-headed Canary Flycatchers, Pin-striped Tit Babblers and a Black-naped Monarch were actively hopping around in a mixed-species foraging flock. After the darkness of the caves, this colourful show with shades of bright yellow and azure blue felt like a jolt of life.

The forests of Bastar are enigmatic. At the end of our trip, two of us deliberately took a local bus ride to go back to our base in the northern Eastern Ghats. Travelling by road, we could see other forests around Sukma district that are still locked from the public eye. I await the time when we don’t have to look at these wonderful forests through scarred windows. And hope that Kanger Valley continues to be the magical portal that introduces people like us to these exiled lands. 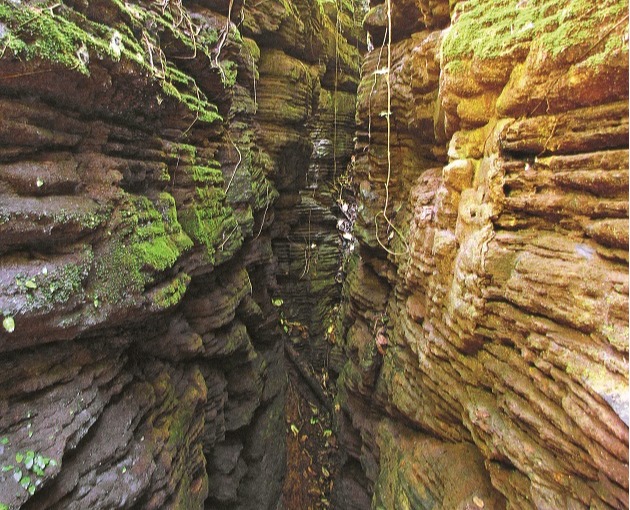 Previously known as Gopansar caves or the hidden caves, Kotumsar is probably the most famous cave in the state. It is easy to miss its entrance – just a hole in the wall that one has to slide through to enter this vast, serpentine labyrinth. Photo Courtesy: Ovee Thorat