The Green Gold of Periyar

It was a warm afternoon in Theni. Humid air from the Varushanadu valley gushed into the car as we drove through undulating terrain with vineyards sprawled all the way to the foothills. We were heading towards the Periyar Tiger Reserve. Once we reached our hotel and settled in for the night, I went out to the balcony and saw something moving in the distance. It was a pair of Indian gaur lying in the grassland, beyond which were bamboo groves. It was mesmerising to see these large bovines. I was excited to see more wildlife over the next few days.

After dinner, we went to the Periyar Tiger Reserve for a night trek organised by the Forest department at 10:00 p.m. It was like a whole other world. Just three metres of walking into the reserve, and I could already see leeches crawling onto our leech-socks! Along with a guide and an armed Vana-Sena member, we walked onwards into a narrow stretch of grassland along the canal. Within a few minutes, our torches illuminated a tall figure, brownish in colour, with long ears. A sambar deer! It is one of the most commonly occurring cervids in the southern Western ghats and is a major prey source for several predators. It is listed as a Vulnerable species on the IUCN Red List, as its population has been on the decline due to poaching and loss of habitat. Soon, we started to see herds of sambar deer in varying sizes, from a new-born fawn to large males.

The guide revealed that he was a former poacher now employed by the Forest Department, working in conservation. He elaborated that there are several people like him who were poachers earlier and then reformed to protect the wilderness. It was empowering to hear his stories as we walked in the darkness. 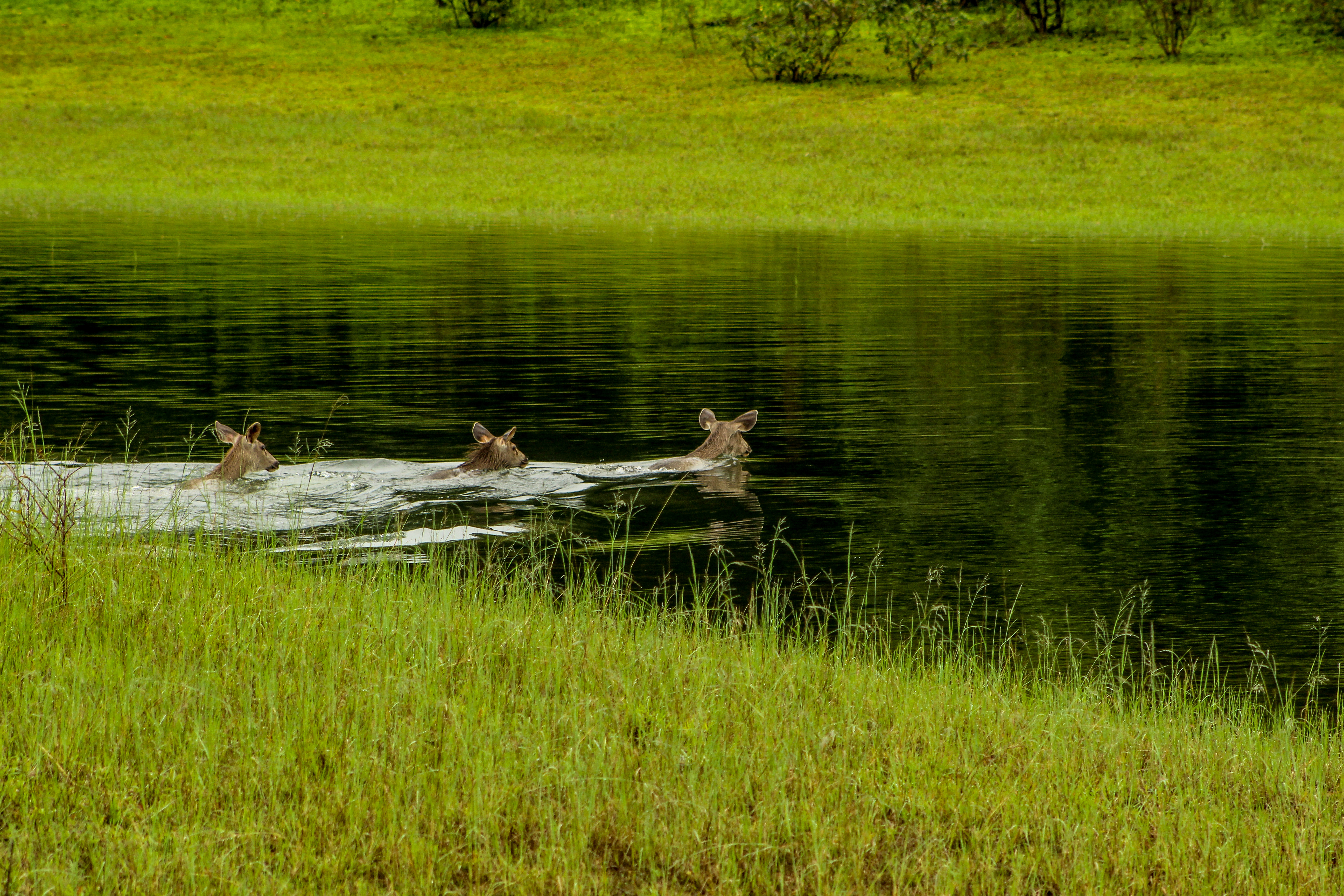 As we cut through the jungle and reached the road that connects the boat-docking site, the drizzles we felt earlier started to intensify with huge drops of water falling from the sky. We ran to the Periyar guest house and waited. The usual sounds of critters were subdued by the rain and it took nearly half an hour for the rain to subside.

We resumed our trek and reached Thekkady lake. We walked along the banks of the lake and suddenly paused. We had walked right into the thick of a large herd of sambar deer! They parted silently, giving us way. It was such a thrilling moment to experience.

After a few minutes, we saw a small spiky creature, an Indian crested porcupine. We spent a few minutes with the stocky nocturnal animal, admiring its banded quill and large claws. When threatened, they usually hold up their sharp quills and emit a mild growl, but this individual seemed calm as we kept our distance. We finally reached the end of our trekking path after sometime. It was a wonderful experience to be in the wild at night with its denizens exposed up close and personal. 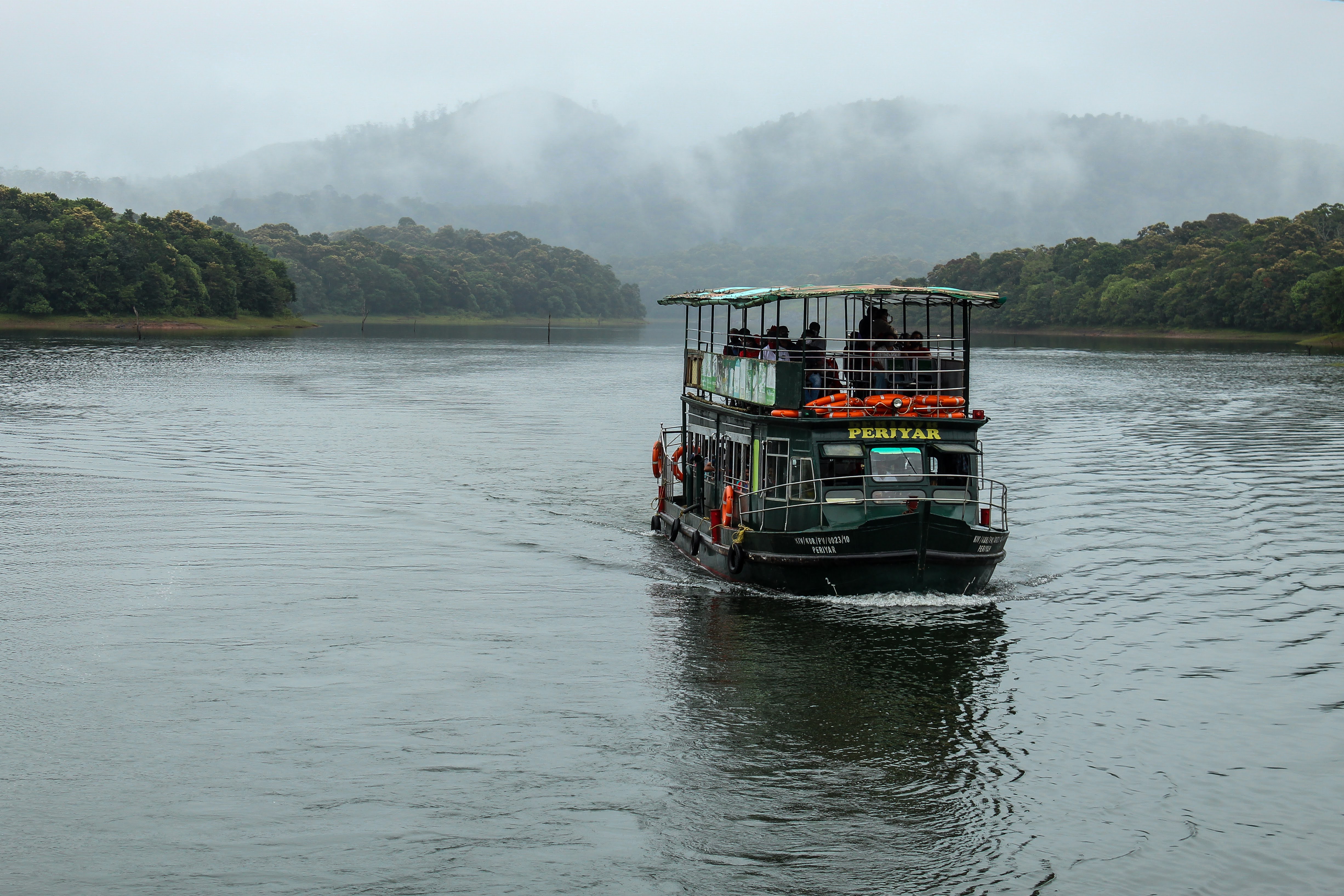 The next morning, we boarded a bus to the Interpretation centre. Barren teak trunks standing in water are an iconic sight in the Periyar Tiger Reserve, and we crossed many such sights. Due to heavy rainfall, I was not hoping to see large animals, and I was right.

We spotted cormorants, both adults and juveniles, sambar deer, wild pigs and a monitor lizard. Most of the cormorants I saw were great Cormorants, easily distinguishable by their size and white chin. on the other end of the lake, we spotted Woolly-necked Storks. These storks with black-iridescent wings and fluffy white necks have always captured my imagination. As the animals in the reserve are accustomed to human presence, they were bold, helping me get good images.

The monsoon rain intensified and turned into a heavy downpour, announcing an end to our wonderful tour. The Periyar Tiger Reserve, one of the iconic wildlife preserves of India with its rich biodiversity is a hopeful symbol for conservation. The way visits are managed in the reserve helped me better understand ‘eco-tourism’. I hope to visit Periyar again to understand the ecosystem further. 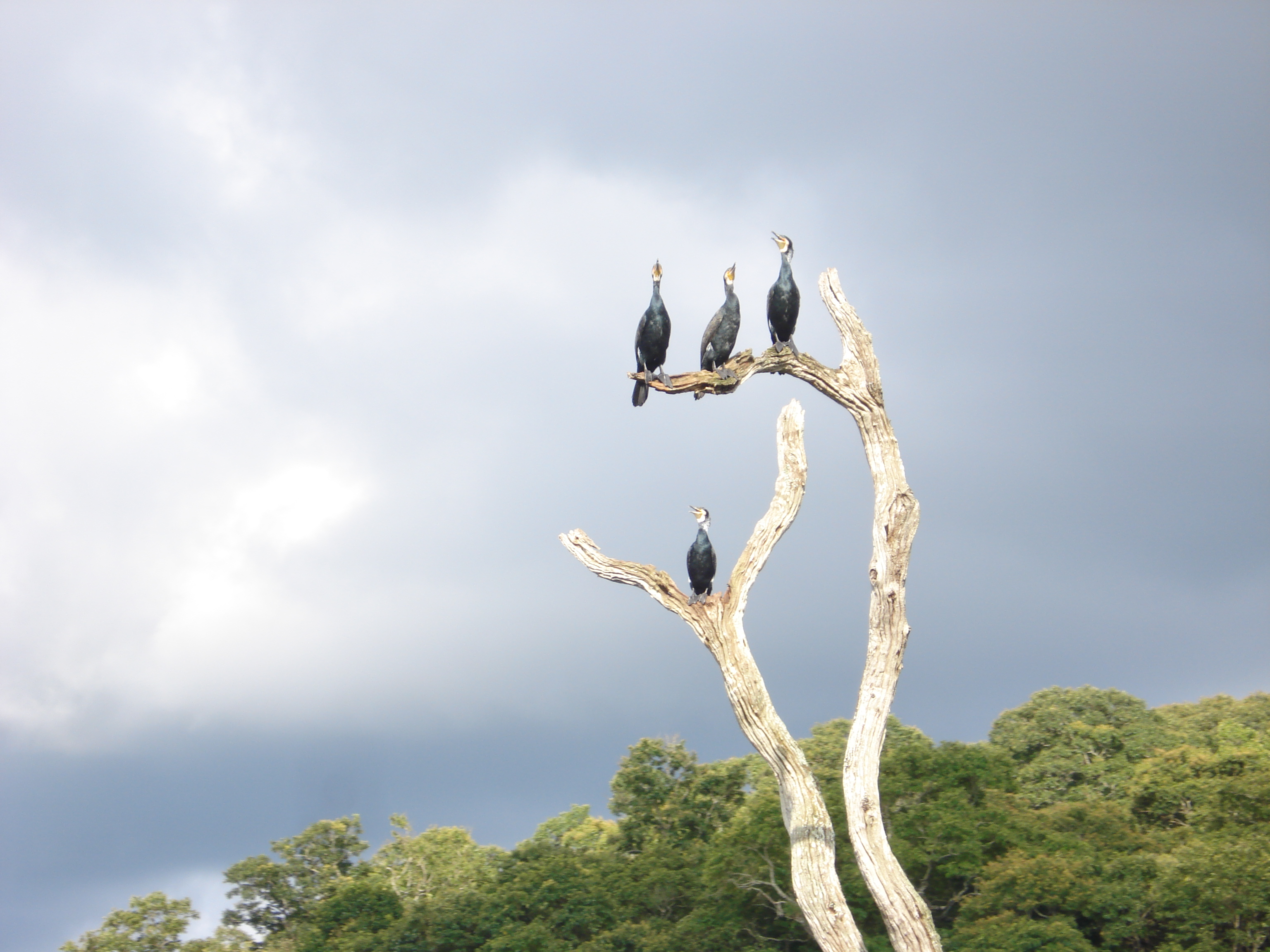 ~ The closest railway station to Periyar Tiger Reserve is in Kottayam, Kerala, and closest airport is in Madurai, Tamil Nadu.

~ The best time to visit is between December to March. The park remains closed in extreme monsoon and summer.

~ Several eco-tourism packages are provided by the Periyar Tiger Reserve, including boating, treks and safaris.

C.R. Ramana Kailash is a Grade 10 student, and author of Fire Of Sumatra. He is a wildlife enthusiast, blogger, birder and an amateur photographer who raises awareness about conservation.