The Joys Of Birding - Diary Of A Birder From Jammu

Text and Photographs by Parvez Shagoo

Hope is a thing with feathers”, Emily Dickinson wrote. She could well have been referring to Jammu. Far off from the dazzling metros and paling in comparison with the paradisiacal bowers of Kashmir, Jammu is redeemed by the alluring variety of avian biodiversity it hosts.

This sub-tropical region offers a host of enchanting hotspots for bird enthusiasts like me, who are always in search of the thrill offered by our feathered denizens. As is the way the world goes, the thrill has its fair share of risks. One unforgettable memory was the time we were in pursuit of an Oriental Honey Buzzard in the high cliffs of Samba District, and nearly had a hazardous rendezvous with a colony of wild bees! That bright sunny day I was with a friend Sudesh Kumar ji, an Assistant Professor, who is always keen on raptors. While traversing the hill and following the OHBs, I was hardly 25 m. away from him when I noticed him behaving rather strangely – somewhere between swatting and flapping. I wondered if he was trying to get rid of a pesky insect. As I inched closer, I saw him struggling to ward off a couple of wild bees. Within a few moments, their numbers swelled. We couldn’t stave off the ire of a swarm of wild bees. We were stung all over, and later, the doctor removed two dead bees that had burrowed into my ear! One would think that such a dreadful encounter would have sworn me off birding, but love is not love if it admits impediments, to borrow from Shakespeare. We shrugged it off, and continued our quest at the same spot a few days later. I recount this incident to testify to the spirit of birding enthusiasts, who brave every possible adversity to pursue their passion. 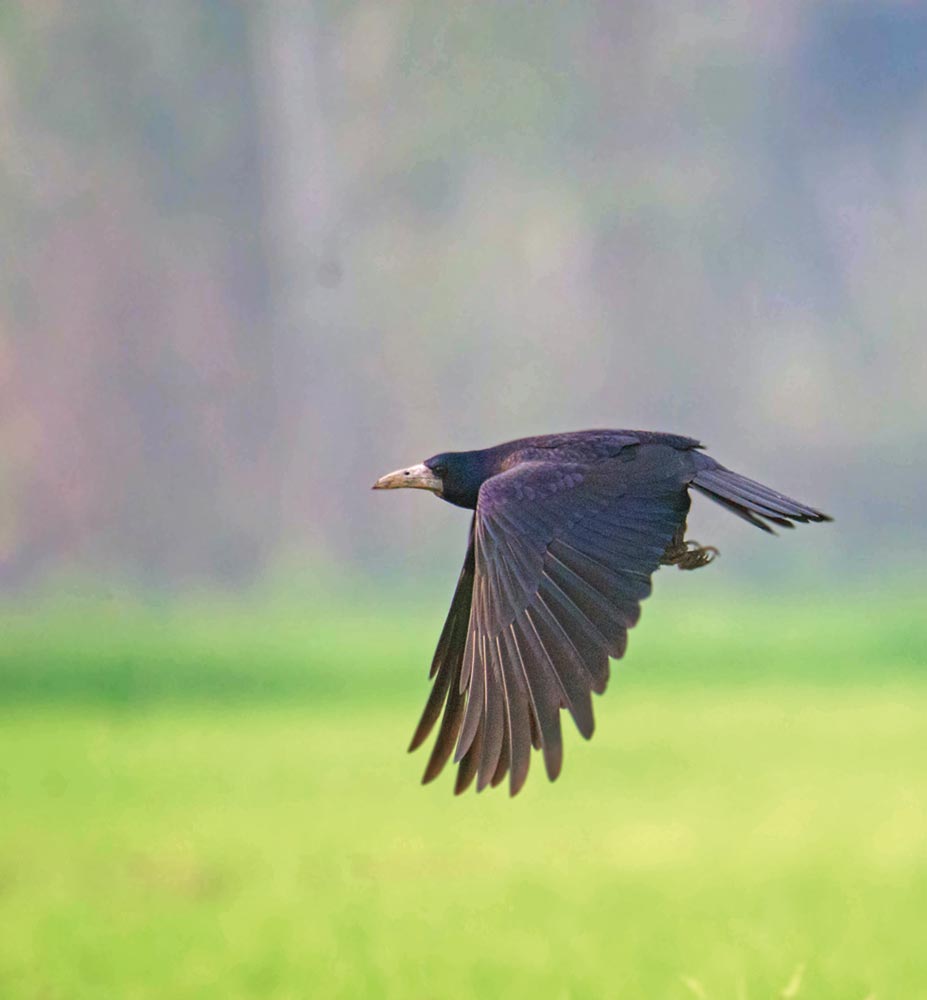 A member of the Corvidae family, the Rook is considered a very special species in the region. Found only around parts of Jammu and Samba, this is its southernmost distribution and is usually spotted in winter.

Moreover, most birding spots have no such dangers associated with them and are seemingly innocuous spots that betray no sign of being habitats of rare birds. Consider Gharana, a small village close to the Indo-Pakistan border in Ranbir Singh Pura (or R.S. Pura), Jammu. Named after the Dogra Maharaja Ranbir Singh, R.S. Pura is around 30 km. from Jammu city. The region is littered with sprawling agricultural fields and is renowned for its high-quality and aromatic Basmati rice. The wetland here, managed by the Department of Wildlife Protection and designated as an Important Birding Area, receives migratory birds from Central Asia, Mongolia, Russia, and China. Though migratory birds throng other wetlands of J&K, Gharana is unique for its rich resident and migratory bird diversity, with numbers enormous for such a small wetland.

My birding experience around this wetland has always been rewarding. I reported the first ever sighting of a Tundra Bean Goose in J&K from here, in February 2020. I was birding alone and the wetland hosted a huge flock of Bar-headed Geese, regular visitors during winter. A keen look through my binoculars, which I have lately preferred instead of shooting right away with the camera, revealed a beak with a yellow-orange band, which was unlike that of a Grey-lag Goose. Nearby, were two more birds with similar features. Birders tend to get excited about everything that looks new and promising, and often seek out “lifers” – a birder’s first encounter with a particular species. I was sure this was one! I took a few photographs and later referred to a field guide; I was astonished to identify it as a Tundra Bean Goose, an extreme rarity in the Indian Subcontinent. The Tundra Bean Goose is not the only case; there are many other rare birds that occasionally visit the wetland and the surrounding area like the Knob-billed Duck, Common Crane, Pheasant-tailed Jacana, Painted Stork, Woolly-necked Stork, Eurasian Spoonbill, Great Bittern, Rook and many more. Among others, the Rook is very special for the region and found only around parts of Jammu and Samba near the border. A member of the family Corvidae, it usually forages on the ground. The bill, which is greyish black enables it to be distinguished from other crow species. A gregarious bird, it is generally seen in flocks during winter here. Birders from across India visit Jammu to see and capture this rarity of the Indian Subcontinent.

eBird lists Gharana as one of the major hotspots of J&K with 228 species. This is perhaps the only place where one is never disappointed. The agricultural fields in the vicinity also throw up surprises in the form of Indian Spotted Eagles, Amur Falcons and Tawny Eagles, among others. 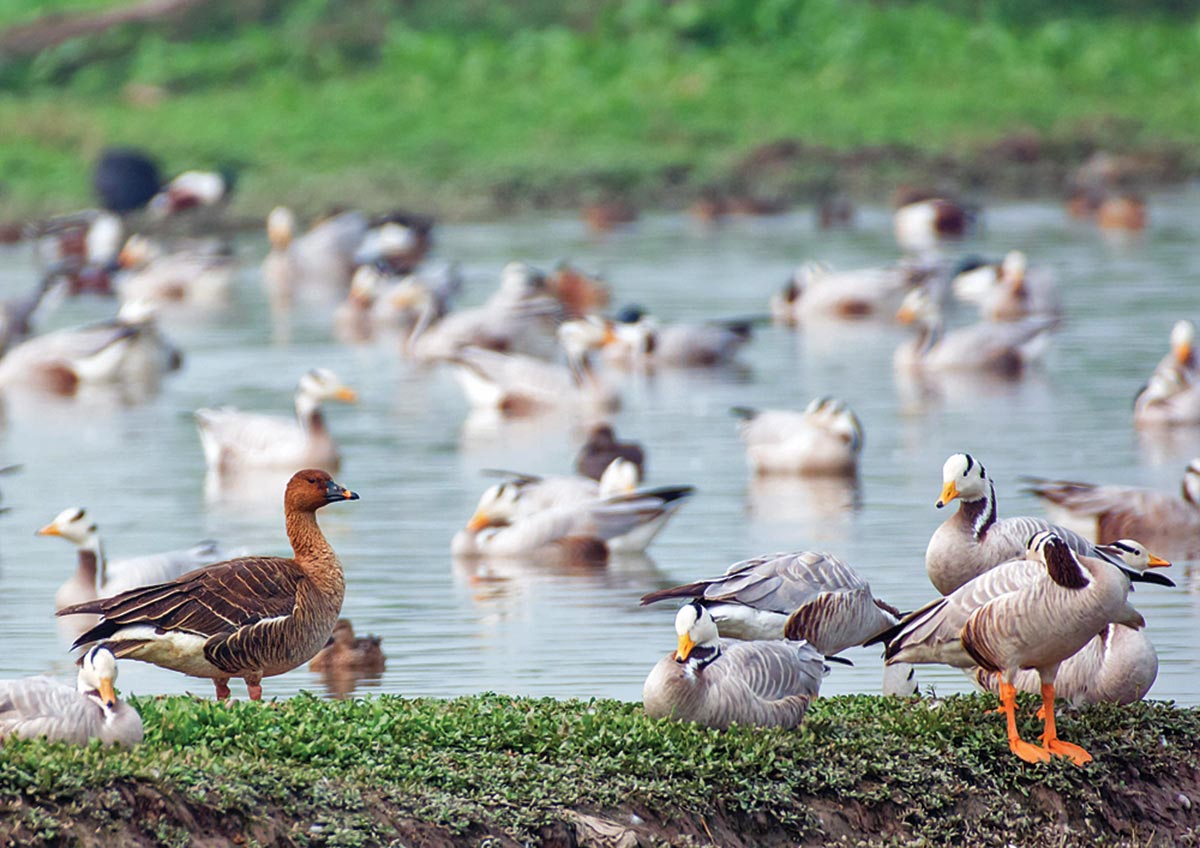 Amidst a flock of Bar-headed Geese, the author had a rare sighting in Gharana in February 2020 – a Tundra Bean Goose. This species breeds in Siberia and can be distinguished from other geese by its dark brown plumage and the bright yellow-orange patch on its bill.

Raptors, owls and vultures have been intriguing and always fascinating to birders. The Basantar–devak course (tributaries of the Ravi/Ujh river) famous for the Battle of Basantar, fought between India and Pakistan in 1971, located at the foothills of the Shivaliks in Samba district, experiences sub-tropical weather – summers are hot and dry and winters quite cold. The grassy landscape offers a perfect habitat for owls and has often delighted us with sightings of Merlins, Short-eared Owls, Indian Eagle Owls, Short-toed Snake Eagles, White-rumped Vultures, Cinerous Vultures, Greater Spotted Eagles and more.

I always recall my first Merlin sighting. I observed a bird, swift in its flight and merely two metres above the ground. Believing it to be a Common Kestrel and more interested in searching for a colony of Short-eared Owls known to be nesting nearby, I ignored it. My friend Dr. Parmil Kumar, a Professor at the University of Jammu, had been waiting to get a few good photographs of the owls. I finally spotted one, and just as I was about to click the shutter, it took off, and in the background was the ‘kestrel’. I clicked a photograph of it. Back home, I sorted through the images and posted a few in our local birding group ‘J&K BirdLife’, where someone pointed out that the ‘kestrel’ was in fact a Merlin, a rare sighting in the region!

Such field experiences are a source of delight that only a fellow birder can appreciate.We spent another three days at the same location but couldn’t find it again. Ironically, we came across several Common Kestrels! 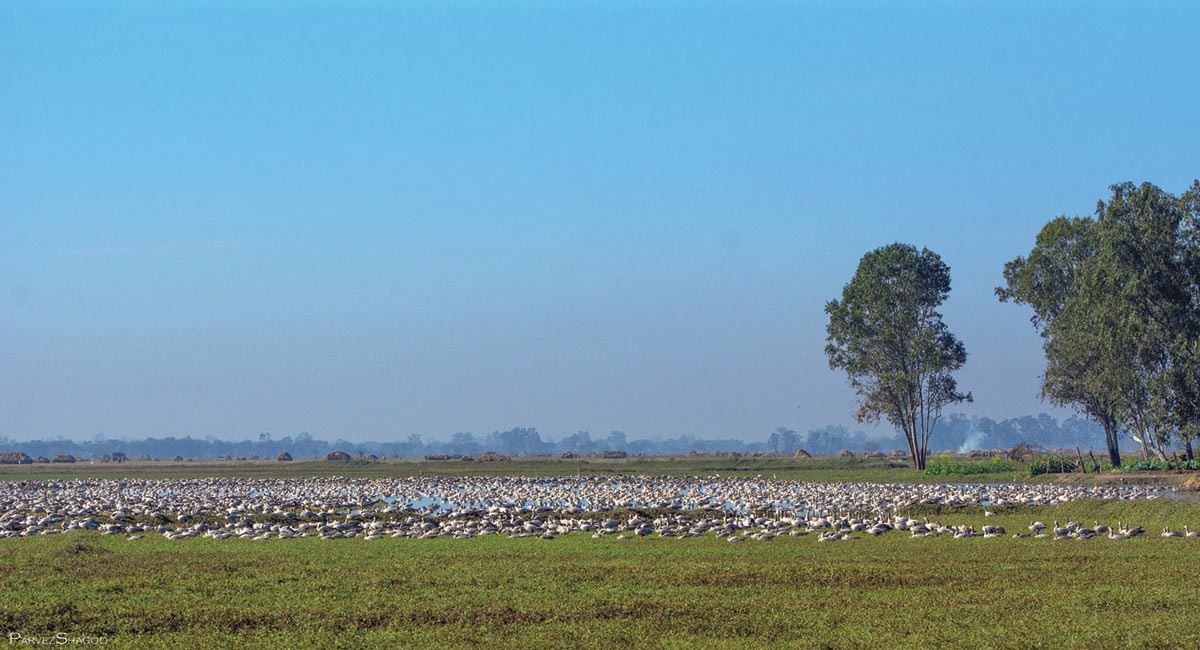 The Gharana wetland is adjacent to sprawling agricultral fields, close to the Indo-Pakistan border. It hosts nearly 25,000 birds of a wide variety of species during the migratory season in winters.

A Host Of Birding Spots

It is not just the rare birds that are of interest to me. Even species like Sarus Cranes, which are commonly sighted, are a joy to behold. Although they have a cosmopolitan distribution, in J&K they are usually only spotted around the Kathua and Samba districts, which experiences a monsoon-influenced humid subtropical climate. Sarus Cranes are a favourite of mine. Their territorial and courtship displays include loud trumpeting, leaps, and dance-like movements These birds form long-lasting pair bonds and in India, they are considered symbols of marital fidelity. They grieve over the loss of their mates, even to the point of starving to death. Locally called ‘Sarron’, not many pairs are left in the region but they coexist with locals, and can be often seen foraging in the fields. 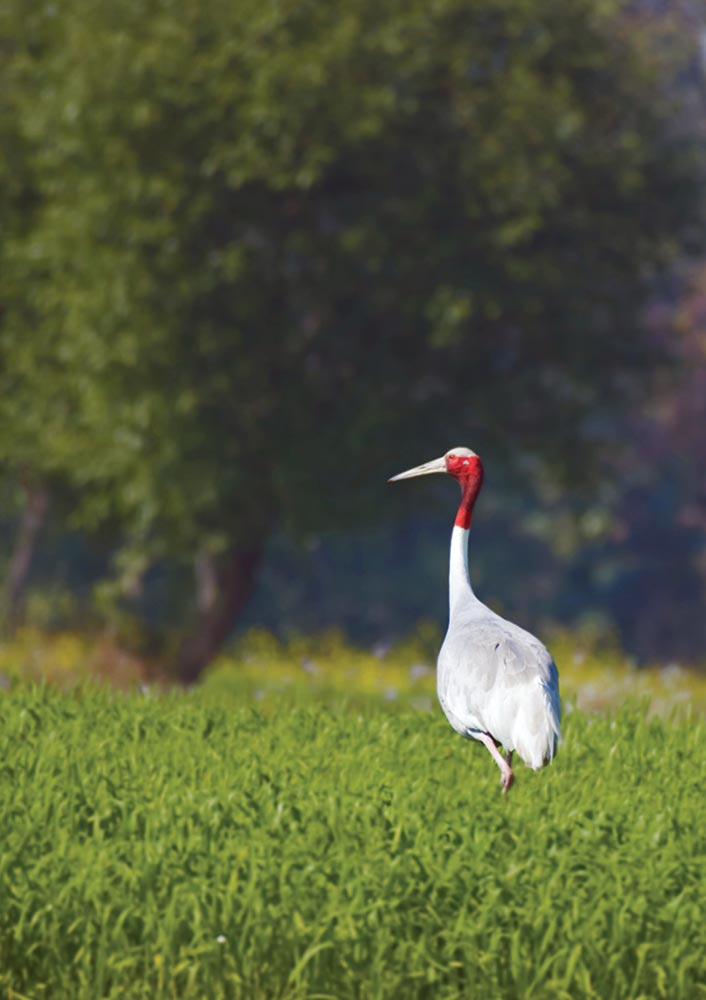 Sarus Cranes, locally called Sarron, are found near agricultural fields usually in the Kathua and Samba districts. They love to feed on grasses, frogs, insects, lizards and more.

Apart from the major hotspots, areas like the Raika Environment Park, Mahamaya City Forest, Ramnagar Wildlife Sanctuary, Nikki Tawi, and University of Jammu within the city’s Municipal limits are regularly visited by birders who can see resident/migratory passerine birds such as Rufous-gorgeted, Indian Paradise, Taiga, Blue-tailed Blue and Grey-headed Canary Flycatchers, Orange-headed Thrushes, warblers, nightjars, and Hair-crested Drongos. The Raika Environment Park is rich in floral and faunal diversity. It is enclosed on three sides by perpetual ridges carpeted with mixed forests along with evergreen trees and scrub forests. The ground cover includes grasses, bushes, herbs and shrubs, besides dominant plantations of Dalbargia sissoo. 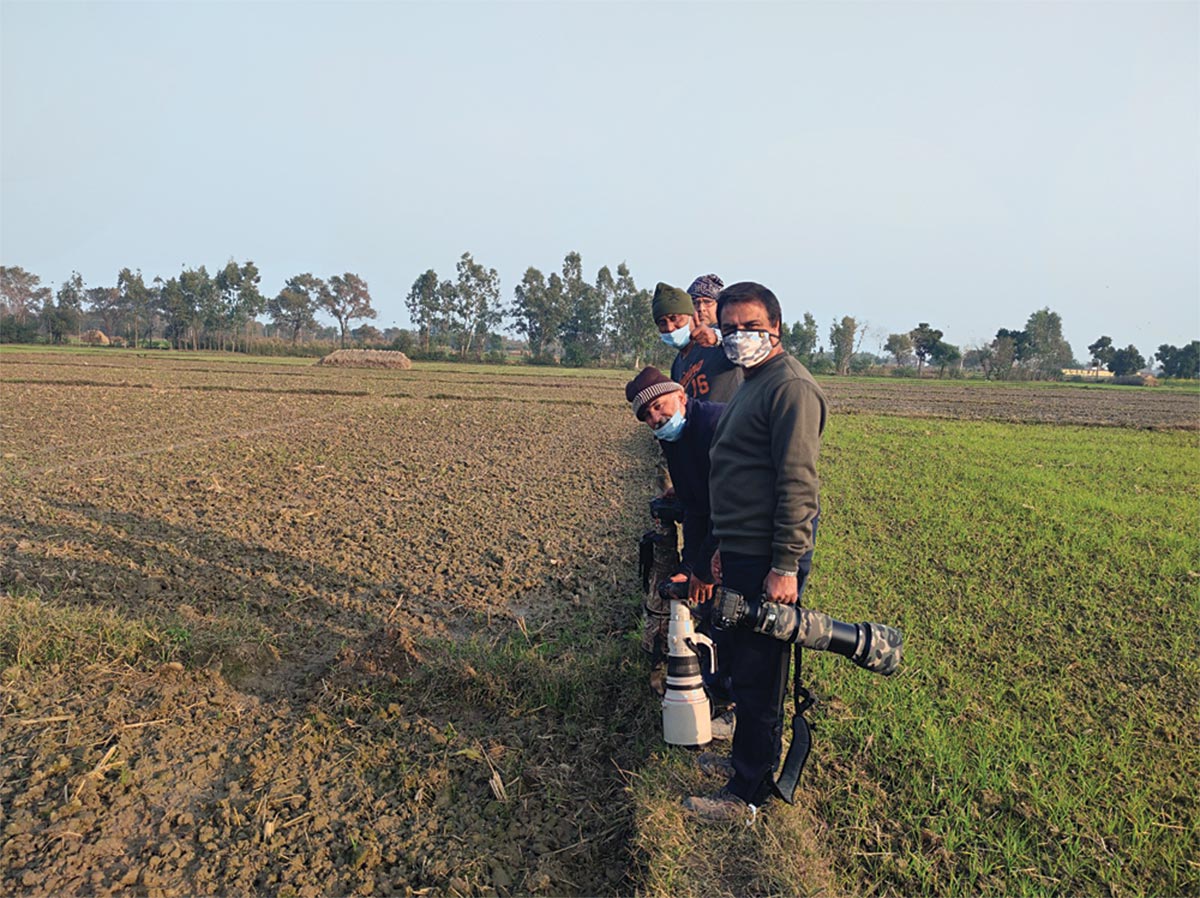 The author along with his guests including Dr. Parmil Kumar in search of the Rook around Gharana. Birders from across India visit Jammu to see and capture this rarity of the Indian Subcontinent.

Apart from the sub-tropical climatic conditions around the main city, places like Patnitop in Udhampur, DKG (Dhera-Ki-Gali) in Rajouri, Bhaderwah in District Doda, Bani and Macchediin district Kathua, which harbour temperate vegetation, attract high-altitude birds. I do believe there is so much more of Jammu that is still unexplored and can be tapped for birding. While the local birding community is active, it is vital that we focus on protecting the wondrous habitats that provide a safe haven for our feathered denizens and work on popularising Jammu as a birding destination worth visiting.

Parvez Shagoo is a Range Officer in the J&K Forest Department and presently posted at the J&K Biodiversity Council. He is also the founder of ‘J&K BirdLife’, one of the most active birding communities in the Union Territory with more than 10,000 members.