The Land of Rainbow Lakes

Call of the Highlands

On an occasional sleepless night, I still reminisce about my time in the highlands of Bhagajang in western Arunachal Pradesh. I am momentarily transported from the monotony of urban life into a spectacularly starlit night sky at 4,000 masl. The room shrinks down into a tent that sways and flutters in the chilling Himalayan wind. Car horns blaring in the distance fade into the gentle tolls of bells strung around the necks of yak that amble leisurely across the slopes.

A good night’s sleep was always an achievement in Bhagajang. The thin mountain air barely  offered enough oxygen and the windchill created such conditions  that the more exhausted you were, the longer sleep eluded you. Bhagajang, among the most stunning landscapes I have explored, was unlike anything else, endowed with spectacular biodiversity, immense cultural history and of course, rainbow lakes.

The highlands of western Arunachal Pradesh cover an area of close to 7,000 sq. km. across West Kameng and Tawang districts. This region is a true biodiversity hotspot. Bordering Bhutan and China, endemic and restricted range species thrive next door to tribal populations that are largely Buddhist and proudly nurture ancient relationships with the natural world – connections that benefit us more than we are aware. The health of this landscape is extremely vital to safeguard the water security of humans across the country as its glaciers and high-altitude lakes give birth to lifegiving rivers. 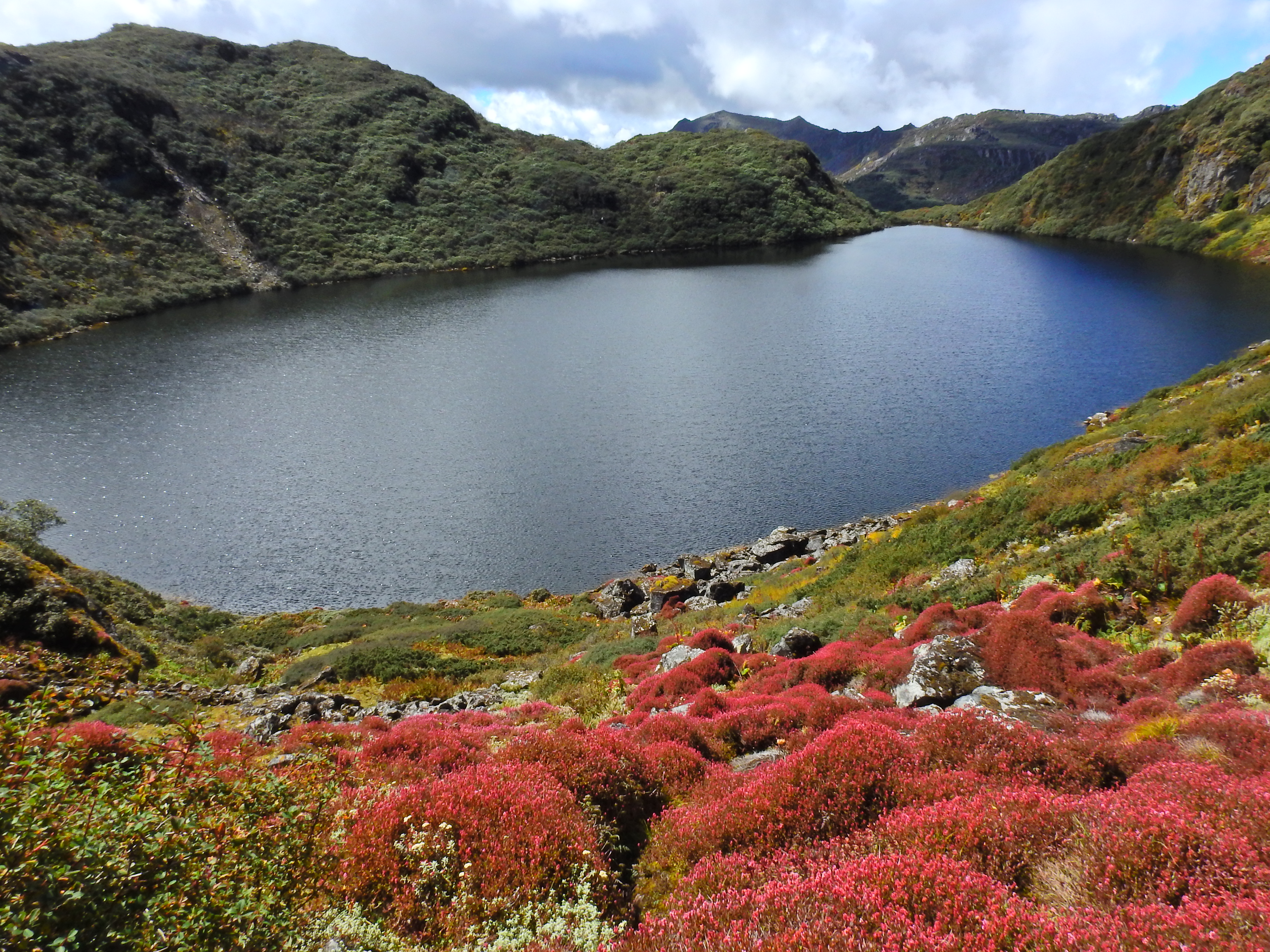 Bhagajang lake and the wetland complex it is part of, in the eastern Himalaya, is one of the most florally diverse regions in the world. Photo: Rajarshi Chakraborty.

The Bhagajang High-Altitude Wetland (HAW) Complex includes around 20 lakes, varying in size from one to 35 ha., according to WWF-India, all situated near or above the tree line at elevations from 3,500 to 4,500 masl. The complex skirts Bhutan and has been traversed by Brokpas or traditional yak herders from India and Bhutan for generations. The Tawang monastery, the largest in India, owns much of the land in the complex, while the rest belongs to surrounding villages.

My first tryst with Bhagajang was in 2013 when I began working with WWFIndia in their Western Arunachal Landscape Programme, and this is when I began to truly comprehend the significance of the highlands and their biodiversity. WWF-India had been working with the Tawang monastery, the Arunachal Pradesh Forest Department and other stakeholders since 2009 to chart out a long-term conservation strategy for Bhagajang. The countless stories I had heard inspired me to be part of assessment surveys of its biodiversity.

Every year, when Bhagajang becomes fully accessible to the outside world, from August to October, thousands of Buddhist pilgrims from Arunachal Pradesh and Bhutan visit the lakes to make offerings. Pilgrims start their trek from a small monastery located below the ridge and visit the most sacred lakes via a circuitous trek, sometime guided by Lamas from the monastery. Apart from the monastery, the only other signs of human presence nearby are the desolate outpost of the Sashastra Seema Bal (SSB), occasional patrols by the Indian Army and the handful of stone huts where Brokpas stay during the summer grazing period. From November, the rough road linking the high-altitude wetlands with the Tezpur-Tawang highway near Sela pass becomes snowbound and Bhagajang closes its door to the outside world. 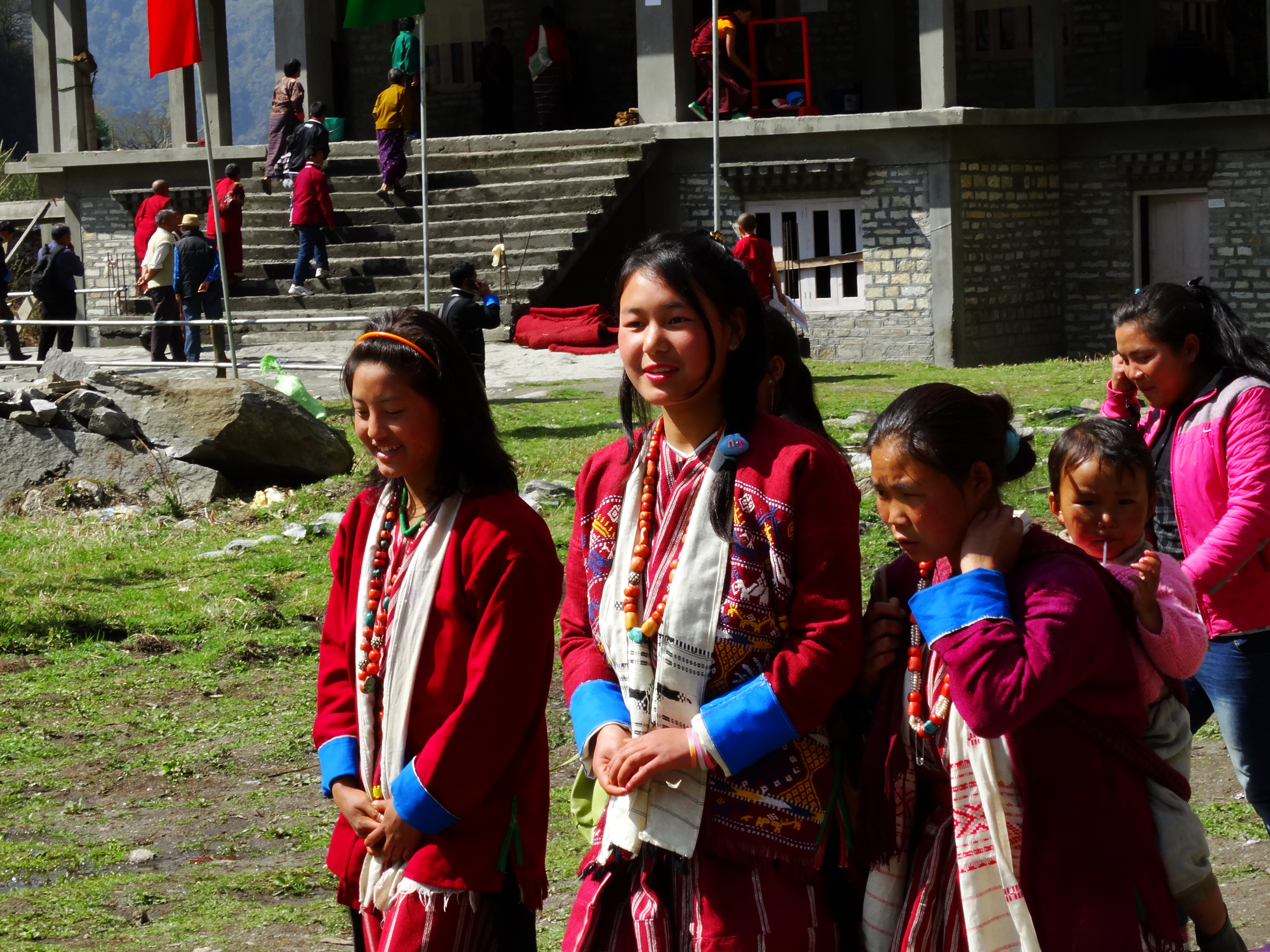 A pair of Brokpa girls wearing their traditional attire. The Bhagajang high-altitude wetland region has been traversed by Brokpas or traditional yak herders from India and Bhutan for generations. Photo: Rajarshi Chakraborty.

During my first visit, I was smitten for life. However uncomfortable the nights were, the mornings more than made up for them. We were greeted each morning by brilliant sunshine and miles and miles of undulating ridges carpeted with rhododendron and juniper shrubs, some still in bloom, and emerald green meadows punctuated by rainbow lakes. The lack of human presence and an absolute ban on hunting has resulted in a lack of fear among many wildlife species. Wagtails, Blue-fronted and White-throated Redstarts, Black-faced Laughingthrushes, Pink-browed Rosefinches and even the rarer Golden Bush Robins and Tibetan blackbirds would gather at our tents most mornings, engaged in their routine activities. Large-eared pikas would scurry across the grass every now and then, disappearing into the many holes by the side of the stone huts.

The area being exceedingly flora rich, we found several species of high-altitude rhododendrons and blooming alpine herbs like Bistorta sp., primulas, potentillas, Silene sp. and of course, the majestic blue poppy Meconopsis sp. in Bhagajang. Species like the aconites Aconitum sp. and rhubarbs Rheum sp. have significant medicinal value and are used in traditional medicines. The lakes are of course astounding, with their myriad hues, shapes and sizes. Some were jet black while some, like the most sacred Dorjee Phamo lake, are nothing short of emerald mirrors. 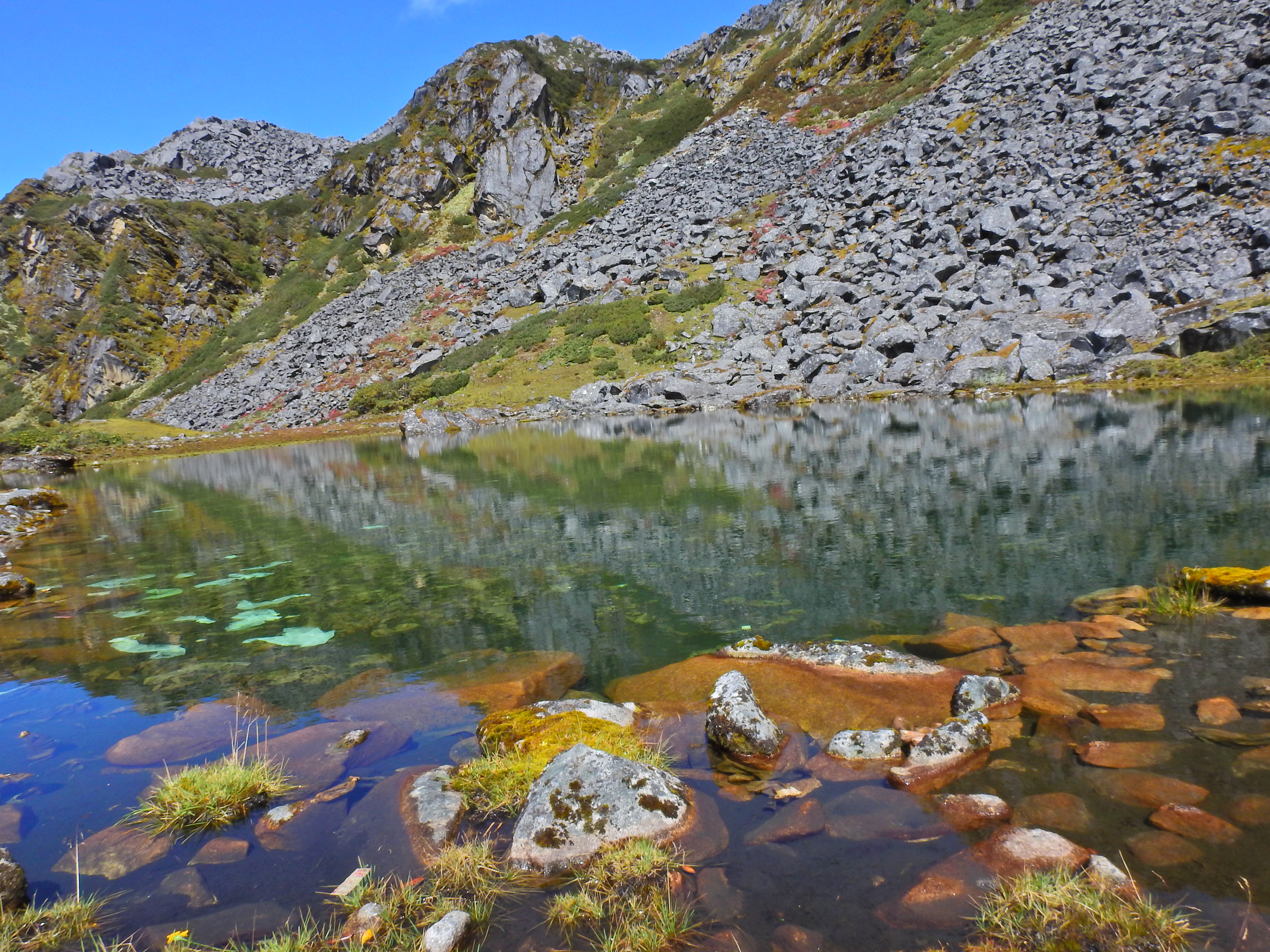 The emerald waters of Dorjee Phamo lake lap up against a narrow, hilly shore in the Bhagajang wetland complex. Photo: Rajarshi Chakraborty.

Around the same time the following year, I was back in Bhagajang. A colleague and I had planned a longer stay to carry out a rapid assessment of the mammalian diversity using camera traps. We also distributed dustbins to the monastery to better manage the waste that accumulates during the pilgrimage season. One of my personal objectives was to trek to the largest lake in the complex, which we had observed on Google Earth. It was situated behind the ridge above our camp, but we were unsure of how to reach it. Help came in form of a Brokpa, Singchung, whose knowledge of the area was unparalleled. He became our friend, philosopher and guide and helped us navigate some precarious hiking sections above 4,000 masl to reach the lake… and what a sight it was!

We also explored a section of the complex, which borders a vast highland in West Kameng called Naga GG. A stretch of the barely motorable road there is part of the border between India and Bhutan! We entered Bhutan to visit a herder’s hut, where we feasted on some khabje (a fried snack made of wheat) and delicious Tibetan butter tea. Herders from both countries share a friendly relationship and even speak the same dialect. From here, a day’s hike takes one to Merak- Sakteng, a large settlement on the fringes of the legendary Sakteng National Park. 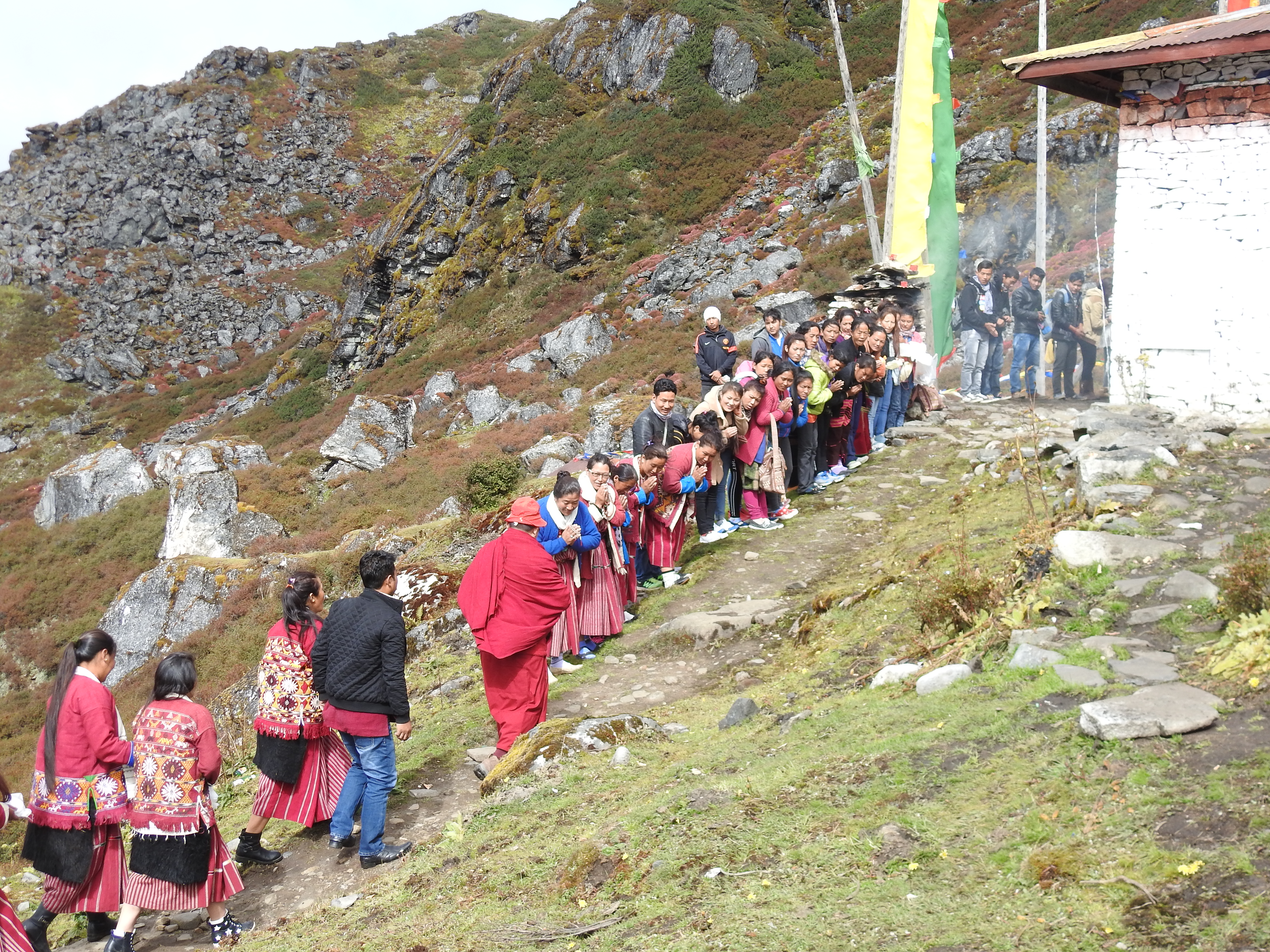 Plastic pollution in the region is a result of the mass movement of pilgrims and tourists who visit the breathtaking, sacred lakes in this region every year. Photo: Rajarshi Chakraborty.

Eventually, the camera trapping team I was leading moved to a slightly lower area called Negroteng, near a spectacular valley and marshland. The only place for camping was at the Sashastra Seema Bal border outpost, for which we had procured permission. Taking shelter in the cozy barrack of the jawans, we rested, looking forward to exploring Bhagajang in the following days. But the weather had other ideas. It rained continuously for the next three days and nights! We could only rue our misfortune and bide our time playing carrom and warming ourselves by the woodfire. During the last leg of the trip, it even snowed and the hills around Negroteng were covered with the season’s first snowfall in September! We managed to send a message to recall our vehicle for the return journey. As if taunting us, the skies cleared and the sun came out just as we were leaving. The trip was not totally futile however, as one of the camera traps we had placed just above our camping site managed to capture a leopard cat traipsing down the trail on a chilly night, at 4,250 masl. This turned out to be the highest elevation record for the species in India (Chakraborty et al, 2017: Cat News 66).

Herders had reported the presence of wild cats during our discussions with them, but this was the first time we had a confirmed identification and visual proof. There were also reports of a bigger cat species roaming the ridges and valleys, where musk deer and red foxes were also reported. Who knows what else lurks amidst the desolate highlands! That brief interlude with the SSB also made us appreciate their resilience and dedication to service even more, amidst hardships caused by the weather and terrain. 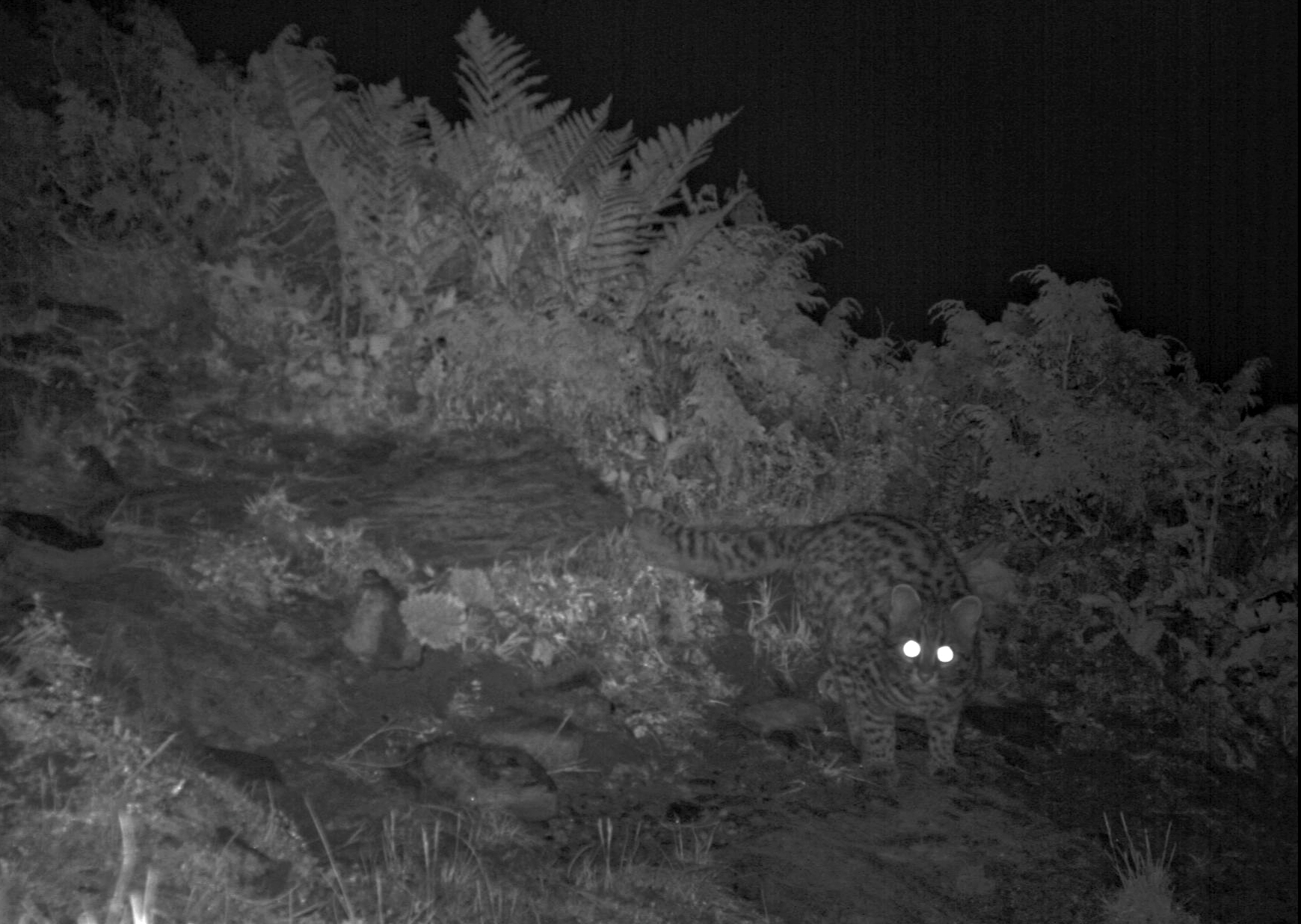 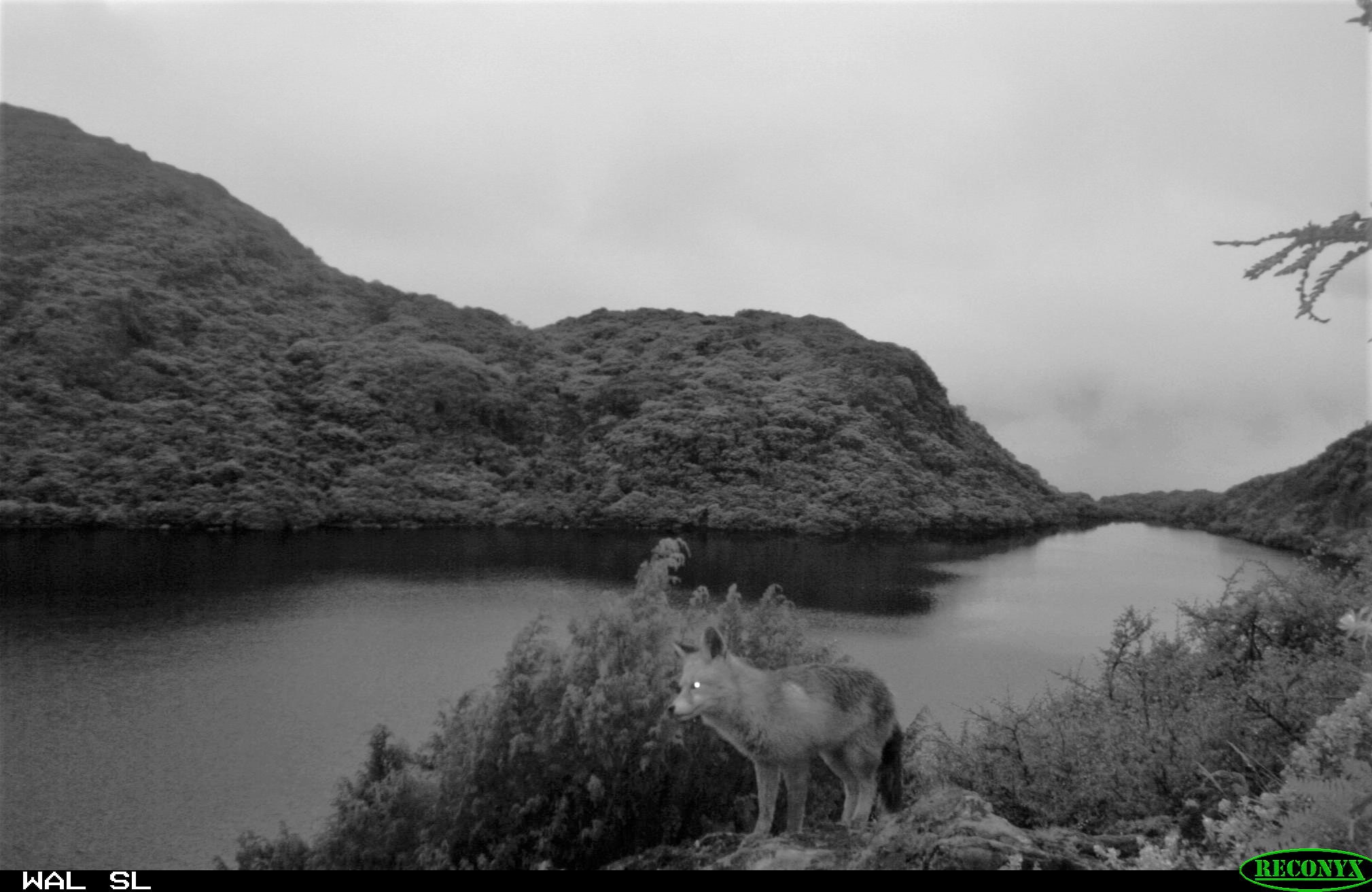 (Top) A camera trap monitored by the author captures a leopard cat at 4,250 masl, the highest elevation at which the species has been recorded in India. (Bottom) Camera traps confirmed the presence of red foxes, a stone’s throw from where the author and his team set up camp. Courtesy: WWF India.

It was two years before my next opportunity to visit Bhagajang, for what would turn out to be my last encounter. This time, encouraged by the leopard cat finding, we aimed to attempt a more systematic survey of the entire wetland complex using camera traps. We installed camera traps at carefully chosen locations and waited with bated breath. However, at the same time, a massive army training exercise ensued across the wetland complex, with hundreds of personnel occupying the areas where we had placed the traps. We had no options other than to cut short our survey. However, we were not completely disappointed – a camera trap near a lake high atop the ridge behind our camp captured a lone red fox, providing the first tangible evidence of the species’ presence here.

I had hoped to repeat the camera trapping exercise the following year, but such plans did not materialise. In the event, I left WWF but, the conservation efforts I was fortunate to be involved in still continue for Bhagajang and other significant high-altitude wetlands in the landscape. Bhagajang is a difficult, isolated landscape, but these characteristics protect its biodiversity, along with grazing restrictions and religious strictures.

Development agendas of course evade no landscape. Rapid road construction on both sides of the complex, to link it to other parts of West Kameng and Tawang, threaten the habitat. There is an acute need to design and implement guidelines so such construction does not wreck havoc in the fragile alpine ecosystem. There is also talk of plans to develop the tourism “potential” of the region, and to increase the presence of enforcement agencies in the highlands. Any such plans, if not carefully implemented with safeguards in place, would cost us the long-term health of a globally important biodiversity hotspot. All stakeholders must be involved in efforts to protect Bhagajang, to ensure a long-term conservation strategy. Across the Himalaya, high-altitude wetlands are vital for ecological health and the protection of cultural identities. They require increased conservation focus. Until then, I can only hope that Bhagajang never loses it aura and remains as inviolate as the legends surrounding it demand.

(Left) A Black-Faced Laughing Thrush. (Right) Wolfsbane, or monkshood, considered poisonous, can be found growing on small, mossy rocks all around the year. Photo: Rajarshi Chakraborty.

The author wishes to acknowledge colleagues in WWF-India and community partners in Western Arunachal Pradesh for their support and assistance.

Rajarshi Chakraborty has been working on biodiversity conservation across the Himalaya for over a decade and half, with a focus on Northeast India. He has worked with the Wildlife Institute of India and WWF-India in Sikkim, northern West Bengal and Arunachal Pradesh. Currently, he is part of the SECURE Himalaya project run by the United Nations Development Programme & Government of India, in Sikkim.