The Living Root Bridges Of Cherrapunjee

Text and Photographs by Madhu Nair and Savita Pillai

February 2012: We hear the name Cherrapunjee, and the school-book tidbit of it being one of the wettest (if not the wettest) places in the world comes to mind almost immediately. Along with that comes visual imagery of lush green forests and numerous waterfalls. So, after an arduous journey of shared jeeps from Guwahati to Shillong and Shillong to Cherrapunjee, we were  a little disappointed to see a dusty town surrounded by dried grass on rolling hills that were more brown than green. However, as soon as we boarded a taxi and sped toward the small village of Laitkynsew on the outskirts of town, we were duly transported into the land of our imagination: a fertile landscape of thick foliage, steep cliffs and deep valleys.

Situated on the east Khasi hills, Cherrapunjees original claim to fame of being the wettest place in the world has been usurped (or at least challenged!) by a neighbouring village that has received just as much rainfall. However, Cherrapunjee still remains the picture-book town epitomised by the famous poet Rabindranath Tagore in several of his poems. Perhaps, that is why Cherrapunjee is still a favorite holiday destination for the Bengalis. In fact, they love coming  here during the monsoons to witness its onslaught and revel in it. 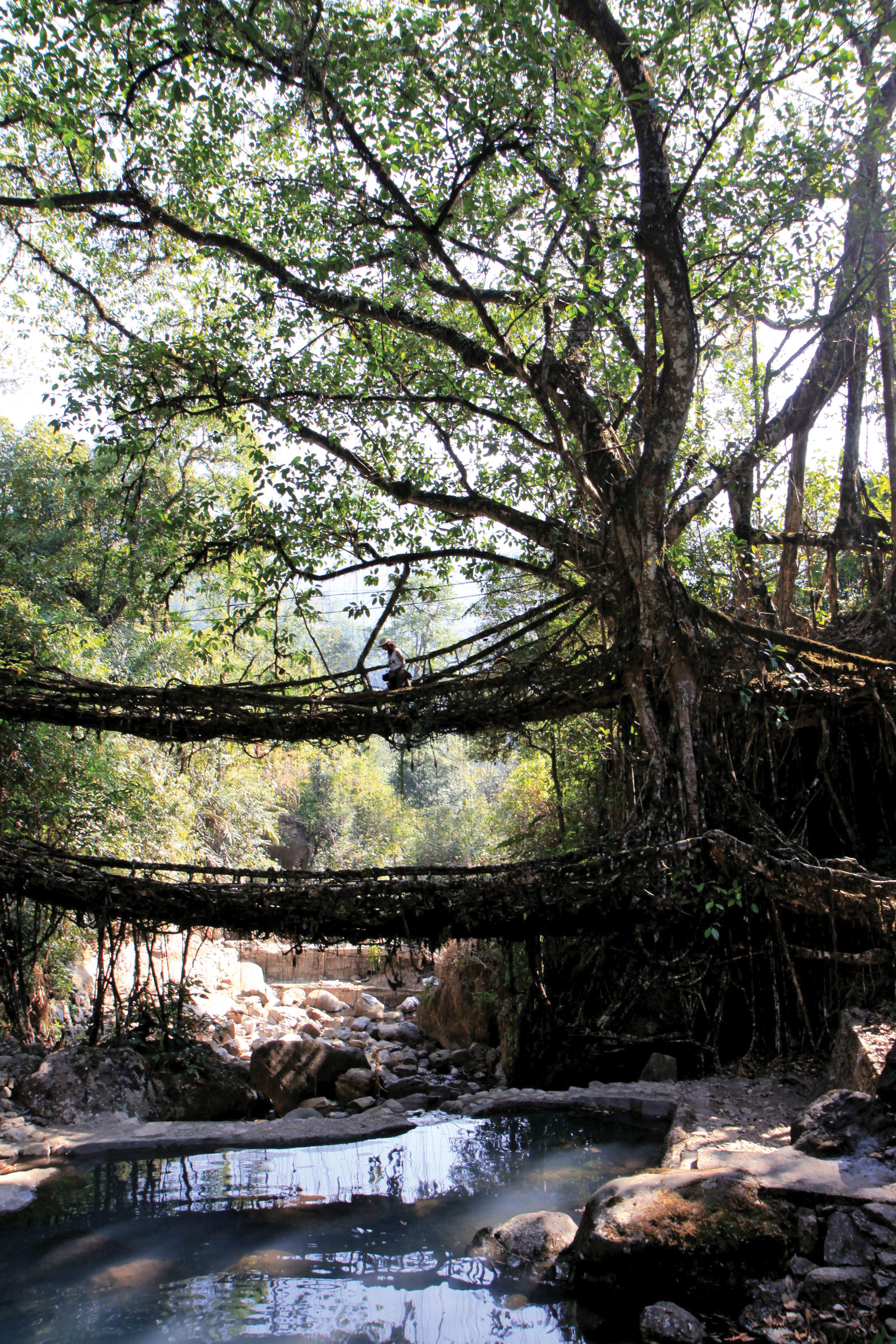 Locals have ingeniously adapted the rubber trees Ficus elastica to create swaying root bridges that can withstand the incessant and heavy rains that bathe the region. Tree roots are moulded and crisscrossed to form a sturdy base. Large gaps between the entwined roots are covered with stone slabs.

Cherrapunjee has some lovely waterfalls and caves to visit but our main reason for being there was to hike to what are called the ‘living root bridges. These are bridges that have not been built, but actually grown!

Because of the incessant rains in the region, regular wooden bridges tended to rot easily and were just not durable enough for the native Khasi tribals who had to negotiate numerous streams to get around in the Khasi hills. They noticed that the indigenous rubber trees Ficus elastica were adept at perching on huge boulders and burrowing their aerial, strong, pliable roots deep into the riverbed, thus enabling them to withstand fast-flowing streams and soil erosion with relative ease. The tribals soon perfected the technique of growing and moulding these roots to form bridges across the numerous streams and waterways that dot their hills.

To achieve this, they hollowed out trunks of betel nut trees and used them as a moulding cast to guide the roots of the rubber trees to grow straight out. Once they were long enough to span the waterway, they were allowed to take root in the soil across and grow in strength. A bunch of roots were intertwined to form a base that is wide enough to allow foot-space for at least a single person, thus creating perfect walkways across the streams. As they mature, the roots are known to become strong enough to hold up to 50 people at a time. This whole process of building a ‘living root bridge takes about 10 to 15 years - a feat of sheer patience! Some of the existing bridges are well over 500 years old and are still growing in strength with every passing day!

These bioengineering masterpieces are surely one of the most wonderful examples of man living in harmony with nature. 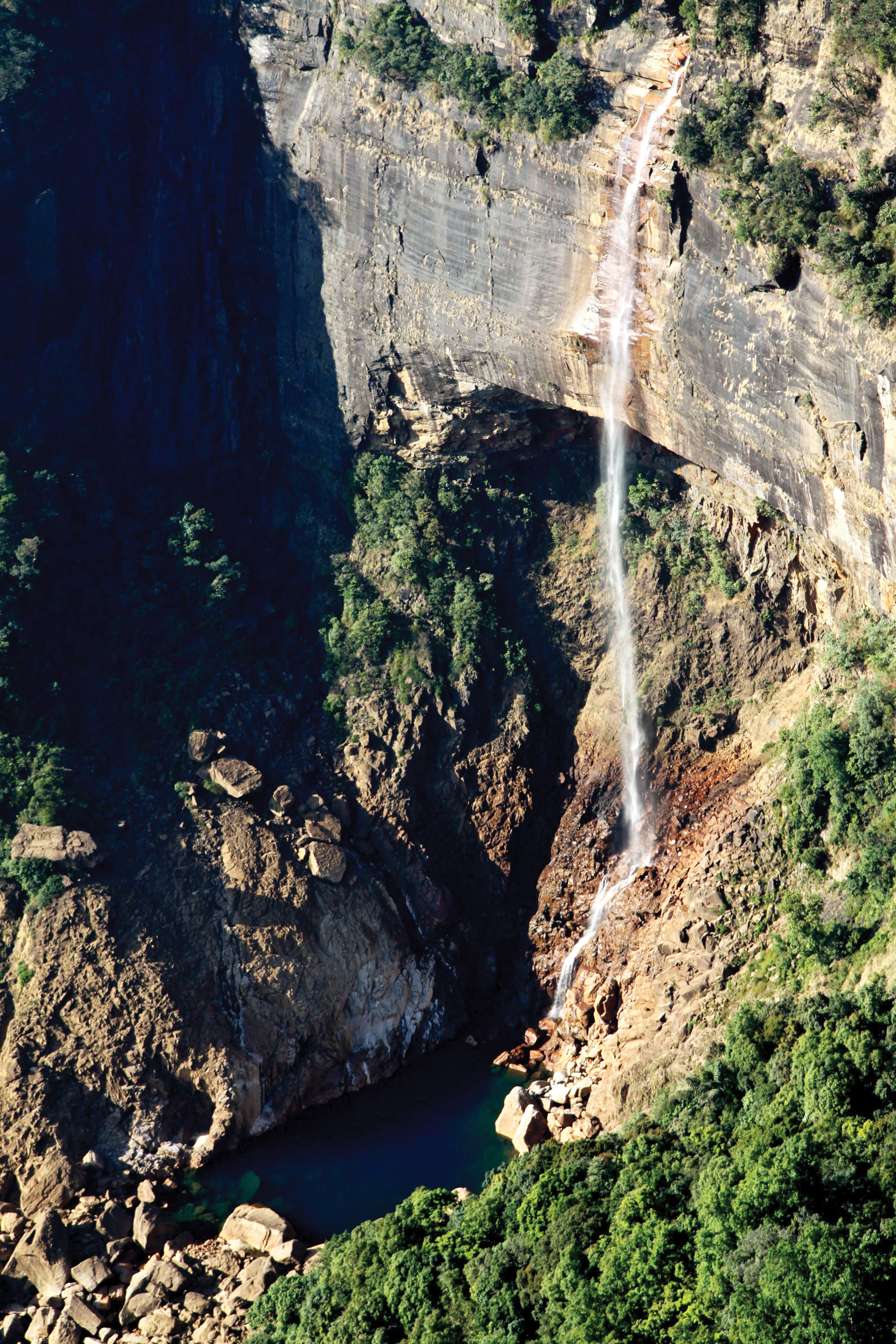 If protected, the stunning vistas of Meghalaya alone could bring in enough tourism revenue to offer livelihoods to more than a quarter of its residents.

There are quite a few living root bridges in the East Khasi Hills. However, one has to trek into the forest to see them. The nearest one from the village of Laitkynsew is about two hours away on foot while a double-decker one (two-leveled bridge) requires a strenuous half-day trek to a Khasi village called Nongriat. We opted for the latter as we had a whole day to spare and the inclination for a nice trek. The owners of the resort we were staying at arranged for a guide to meet us at eight a.m. the following morning. The guide turned out to be a local Khasi lad, Peter, with a chirpy disposition and a mean sense of humour - he was amused to see us city folks attempt this strenuous trek!

The actual trek started from a small Khasi village, which is about three kilometres from Laitkynsew along a motorable road. We opted to walk this distance instead of taking a cab as the route is incredibly scenic with views of the surrounding mountains and valley below. At the village, we trekked on a dirt road for another couple of kilometres until we reached some concrete steps that led down into the forest below. These steps had been especially built by the local government to keep the villagers safe during the heavy onslaught of the rains when the soil on the mountainsides tends to loosen and cause accidents. At the head of the steps we realised that while the descent on the mountain road had been gradual, it had now turned steep and a little scary, especially considering that we would have to climb back up; Peter chuckled at our anxious looks.

But it was unbelievably gorgeous. The trees formed a canopy above our heads and blocked out the strong morning sun, offering us a wonderfully shaded trail. About 1,900 steps later when we came upon a Khasi village, we hoped that we were close to the bridge. But there were more steps ahead! This time, though, the descent was interspersed by some spectacular crossings on long, narrow, wire suspension bridges over gushing streams below - a thrilling, albeit dangerously swaying walkway! 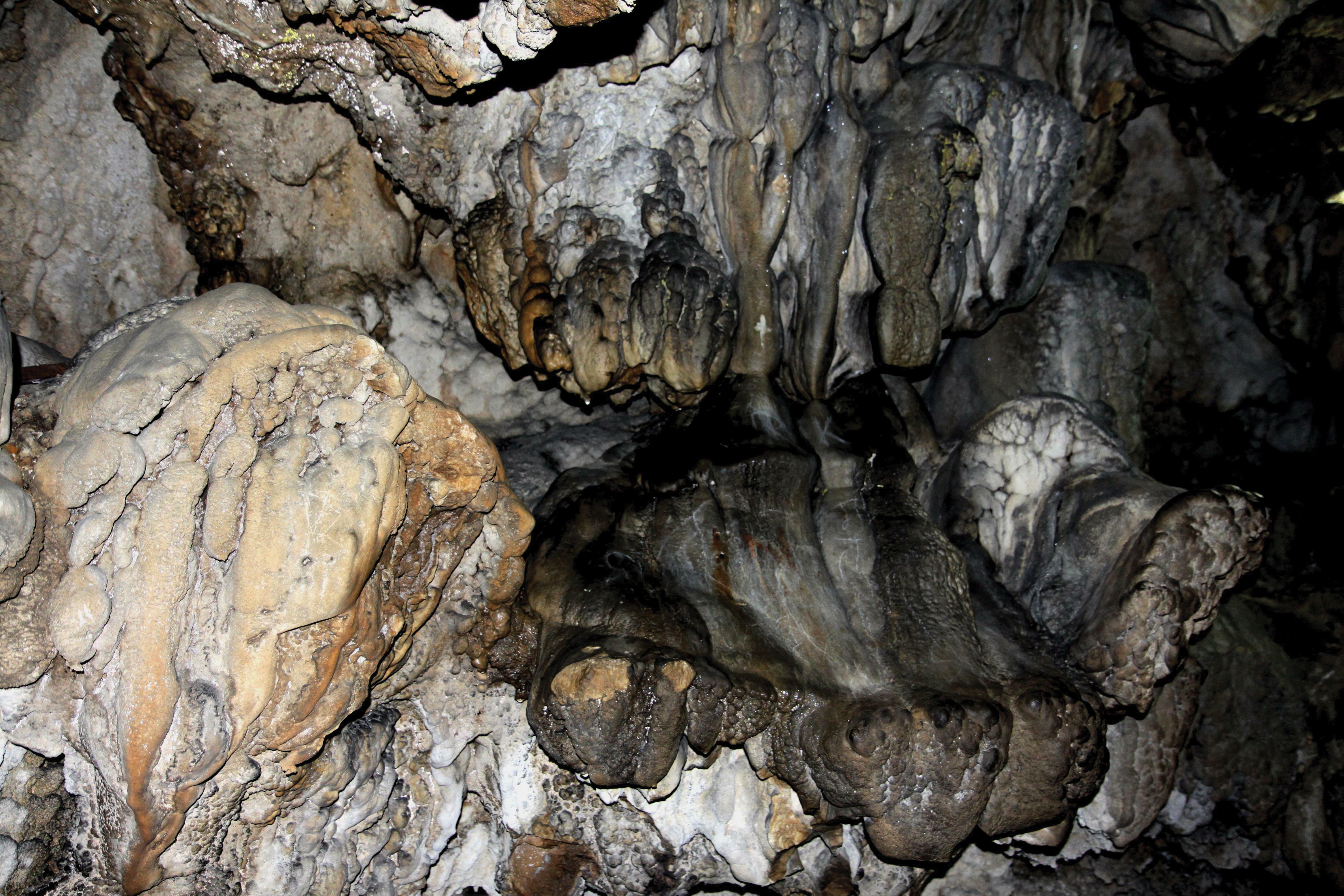 If protected, the stunning vistas of Meghalaya alone could bring in enough tourism revenue to offer livelihoods to more than a quarter of its residents.

Soon we were deep into the Khasi forests and close to the ‘living root bridges. Before getting to the double-decker bridge, we came across a single-tiered one, which was short but quite spectacular. The roots felt amazingly strong beneath our feet and it was almost hard to believe that we were standing on a living thing. Further on, in the village of Nongriat, we finally caught sight of our destination: the double-decker bridge! It was amazing to see how a trees roots had been moulded and crisscrossed to form such a sturdy base! Any gaps between the entwined roots had been covered with slabs of stone, which, over time, had embedded themselves snugly into the bridges base. There were protective railings built along the sides as well for support.

After a packed lunch of aloo parathas (potato-stuffed Indian bread) along the banks of a natural pool nearby, we started our long trek back to the resort. The steep climb back up to the road was as challenging as we had expected, but our minds were focussed and we took frequent breaks. Despite a couple of muscle cramps, we made it back to the resort by around 4:30 p.m. with a smile on our faces and reluctant acknowledgement on Peters - it had been a fabulously adventurous day!

On their 10th anniversary, Madhu and Savita went off on a multi-year trip through India. Visit www.10yearitch.com to follow their journey as they experience life to its fullest and stitch memories to last a lifetime!