Text and photographs by Sandeep Das

I was seated at the front row on the edge of my seat, excited to listen to Dr. Patricia Wright, one of the greatest primatologists and authors there is, known for her work on lemur conservation in Madagascar. At the 2016 Evolutionarily Distinct and Globally Endangered (EDGE) Conservation Tools course in Madagascar she also spoke of the hardships she faced and lessons learned along her journey, including the need to create awareness on the conservation of a particular species among the general population. I pondered over the need to do the same for the species I was studying, the purple frog Nasikabatrachus sahyadrensis, a species that emerges from under the ground for only one day, not unlike Kerala’s mythological King Mahabali who was banished to the underworld and given permission to meet his subjects no more than once a year. On my return to India, I contacted an artist-friend Abhilash Chacko who set to work to create a poster that we circulated widely. 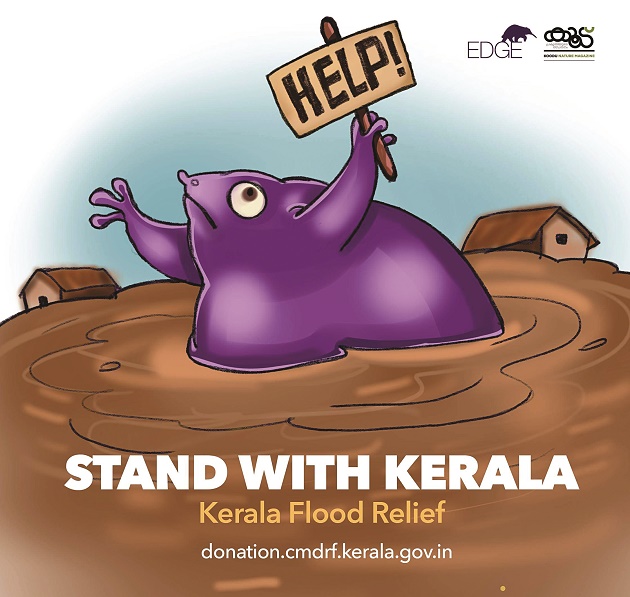 Soon calls began coming in from different parts of Kerala on sightings of the purple frog, which led to more awareness programmes and workshops for people from all walks of life, ranging from university students to the Forest Department. 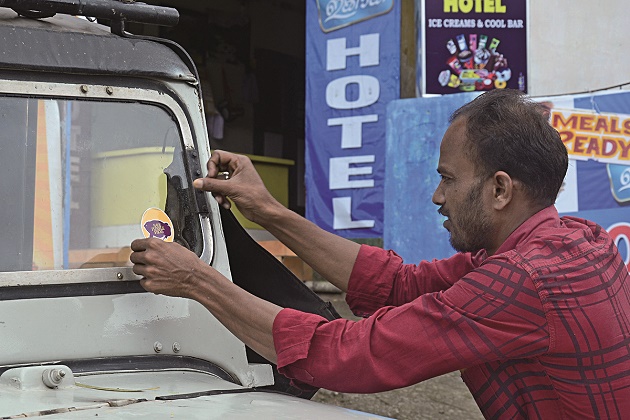 This driver, who ferries tourists around Nelliyampathy, proudly displays a Save the Purple frog sticker on his jeep as a pledge to stay watchful on the roads at night during the monsoons.

Our Mahabali story was always a great icebreaker.

In November 2018, the Kerala State Government decided to declare the Budha Peacock as the State Butterfly. And that set me wondering why Kerala should not have a State Amphibian given that it possesses 170 species. And what better candidate for the role than the Mahabali frog aka the purple frog? I contacted Dr. Jafer Palot, a member of the State Wildlife Advisory Board and submitted a proposal stating the points listed in the box (see at the bottom of the page) helped by my supervisor Dr. P. S. Easa.

I had been interested and involved in amphibian studies for years, but it was only in 2016 that my work on purple frog conservation found support by way of a fellowship awarded by the EDGE of Existence Programme. Rajkumar K.P., Nithin Divakar and Benjamin Tapley joined me in shaping and undertaking the project, a conservation prioritisation tool focused on evolutionary history. The purple frog is ranked as the third global priority for amphibian conservation on account of its uniqueness and irreplaceability. Our work included mapping its distribution in Kerala, creating awareness of the frog species and its associated stream habitats, identifying and addressing threats to the species and winning the support of local communities and conservationists.

Interestingly, my career never began with the study of amphibians. My interest was avians but then I met Dr. Anil Zachariah in 2010, who introduced me to the fascinating world of frogs. Walking and working through the wild Western Ghats at night made my adrenaline surge. Frequent trips with Dr. Zachariah got me hooked to the dazzling variety of frogs in Kerala. He had been studying purple frogs to unravel the mystery of how, when and where they bred. 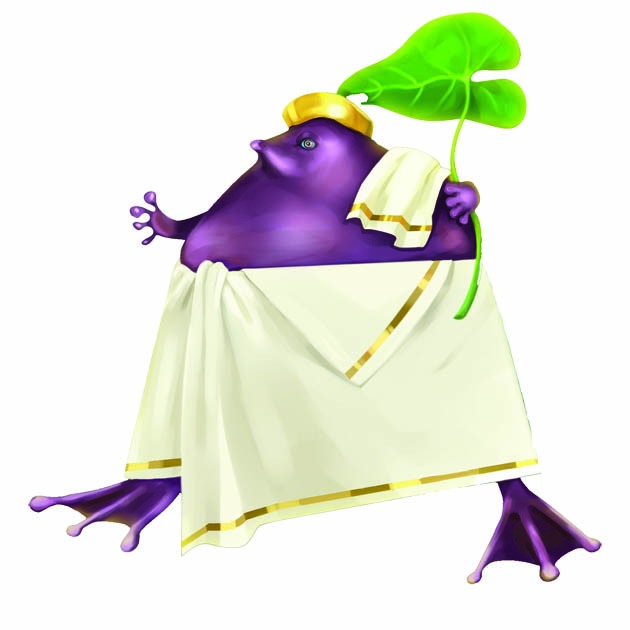 At this point I had only seen one rescued animal and wanted to observe the species in the wild. Even my mobile ringtone was set to the species’ distinctive korakok korakok korakok call recorded by Dr. Zachariah. In April 2011, as I drove down from Valparai for a reunion with my schoolmates in the pouring rain, we stopped at a tea shop close to the Poringalkuthu Dam. Korakok korakok, croaked my phone. I reached into my pocket, only to find my phone dead. I switched it on and returned to my conversation when the phone rang again mysteriously. It was only after the third time that we realised the call was the real McCoy – a purple frog signalling for a mate! The call came from the underground tunnels that were enticingly close to where we stood. Unfamiliar with the frog’s habits or habitat, I never imagined this to be a suitable location. Over the following days, I meticulously scoured the area without luck. Dr. Zacharia had advised us to look for signs of mating behaviour. There were hundreds of purple frogs calling around but whenever we approached, the call seemed to retreat downwards, deeper into the ground. Later, when Dr. Zachariah visited the location, we found many fish-like tadpoles, with suctorial mouthparts allowing them to cling onto rocks in fast-flowing streams. Our efforts to unravel the breeding story proved fruitless. All we saw were some eggs on the rocks and several tadpoles at the sampling sites. We totally missed the main event!

The purple frogs chose not to make their dramatic appearance that year. In June 2011, a friend in Idukki called to report a purple frog he came across while digging a pit to plant rubber. A long drive through heavy rain ‘only’ revealed a painted frog, much to my disappointment. But nature surprises us in mysterious ways. On our return, yet another friend, Jobin Mathew, who had recently developed an interest in frogs, played a frog call he was unable to identify. It was undoubtedly a purple frog. The next monsoon, we decided to focus on one single site rather than use the ‘scattergun’ approach we had been taking. It proved to be one of the best decisions we made because we discovered several breeding pairs. Each year since I have observed the exact day they emerged from their subterranean haunts. Following the purple frog became an obsession and, with the help of friends including Rajkumar K.P., Nithin Divakar, Sarath R., Prasad T.S., Lal V. and Dijith D., I observed over 600 breeding pairs, between 2012 and today. 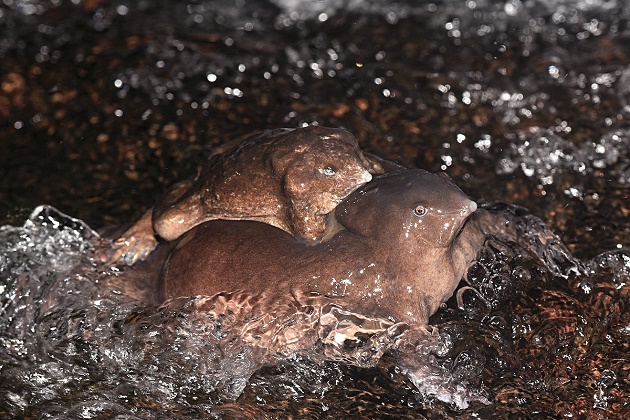 A female purple frog makes the treacherous journey to her egg-laying site, with the male on her back.

Each year, the frogs dig their way out from under the ground, emerging only for one single day to lay their eggs. Moreover, they spend just a couple of hours before retreating to their subterranean safehouses, away from the many dangers that confront them even during their two-hour sojourn. Their emergence is timed with the first monsoon rains that hit the Western Ghats, when their egg-laying sites become inundated by seasonal, flowing streams. Males now come close to the surface and call from the entrance of their underground tunnels. Mating (known as amplexus) happens inside the tunnel and the females, double the size of the males carry their mates on their backs to carefully chosen egg-laying sites, normally rock crevices in torrential stream beds. The journey is treacherous. We often spotted dead females with split abdomens and eggs soaked in vivid red blood. Brown Fish-owls, Brown Hawk-owls, crabs and checkered keelbacks lie in wait to devour the frogs and their eggs. The bulbous female waddles with her burden through fast currents to reach the egg-laying site. The amplectant pair may also be mobbed by other sexually active male toads of different species, often bright yellow, which in their hormone-incensed state, will attempt to mount anything including pairs of purple frogs! 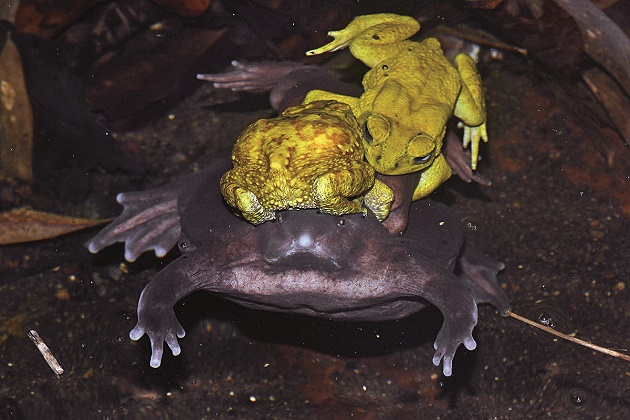 If the amplectant pair do manage to successfully reach the crevice in the streambed, the female will deposit 2,000-4,000 creamy white eggs, just as their ancestors have done for millennia. Soon after the mating and egg laying, the adult frogs dig down to their underground burrows for another year, likely sustained by termites.

This exceptionally brief window of activity makes seeing purple frogs a huge challenge and an immense privilege. On hatching, the tadpoles cling to rocks using their highly suctorial (sucker like) mouthparts. They survive in the fast-flowing water by grazing on algae growing on rocks covered by sheets of torrential water. There are very few frogs capable of exploiting this seasonal habitat, which is how vulnerable Nasikabatrachus sahyadrensis tadpoles avoid competition with other aquatic life and predators.

It takes around 100 to 120 days for the tadpoles to metamorphose (turn into miniature frogs) after which they too retreat underground to begin their fossorial phase. Very little is known about the life of the frog underground although there are records of the frogs being found during well construction, at depths of 12 m. Their complete distributional range is still not established. There are a number of reasons why this living fossil may have persisted relatively unchanged for mega-annums. The purple frogs’ fossorial life, ability to breed in fast-flowing seasonal streams and the highly specialised morphology of the tadpoles may be some of the reasons for their long evolutionary survival.

The threats posed to this species have not been studied in detail, although the purple frog is currently assessed as Endangered, on account of its relatively small distribution. The majority of reported threats are, predictably, anthropogenic. These include consumption of the tadpoles by an indigenous community, habitat loss on account of human activity and the construction of check dams to control water flow, which submerges their breeding sites. During my field work in Nelliyampathy, we observed more roadkills than live animals in the field and that was the case in a majority of their habitats with road networks. We still don’t have any estimation of their population size or longevity. 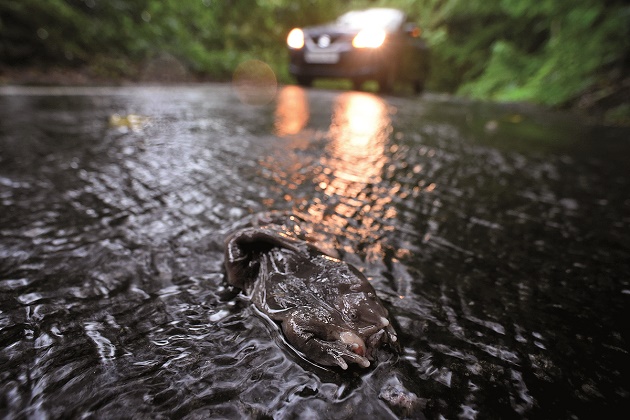 At areas where roads intersect their habitat, purple frogs, often emerge from underground and risk being run over.

I have encountered the frogs in several Protected Areas, but many of the breeding sites occur outside their boundaries. If accepted, the state frog status would be a great move towards the conservation of the species. The road ahead is still bumpy, but hopefully, with awareness, we will find fewer squashed purple frogs on it.

Why nominate the purple frog as the state amphibian of Kerala?

The purple frog is striking and easy to recognise; few other frogs look as bizarre, with a bulging, muscular back and bumpy little limbs that protrude from its massive body. Its behaviour too makes it a curiosity. It lives its entire life deep under the ground, digging its way out for no more than a single day, to mate, lay eggs and thus assure the continuation of the species. It also makes for an ideal choice as Kerala’s state frog because it shares a unique similarity with Kerala’s beloved King Mahabali, who was banished from his kingdom, allowed to return only for a single day every year to meet his subjects. This legend is the story behind Onam, one of Kerala’s most popular festivals.

The furtive, shy existence of this species and the ground-breaking discovery that it is a biological representative of the subcontinent of India that was once part of Africa, forming a land we know as Gondwana, makes it one of the most popular frogs in the world. It was the frog’s molecular study that revealed its relationship with the Zooglossid frog in Seychelles that was one of the evidences that confirmed the Gondwana Hypothesis.

Endemic to the Western Ghats, its distributional range is limited to the state of Kerala. The above characteristics make the purple frog the ideal candidate. While there are many other amphibians recorded in Kerala including Raorchestes resplendens, Raorchestes kaikatti, Astrobatrachus kurichyana, and Mysticellus franki, these are restricted to relatively smaller areas. The purple frog, though marked Endangered in the Global IUCN Red List, is blessed to be one of the most widely distributed frogs in Kerala. If declared as Kerala’s State Amphibian, the frog and its vital Western Ghats aquatic ecosystem in Kerala will benefit from greater protection.