The Secret World of Slime Moulds

Being a naturalist, my adventures to unravel the mysteries of nature have always led me to fascinating experiences. And with Kashmir – ‘heaven on earth’ – being my home, I have come to realise, firsthand, the truth behind the moniker. The area I grew up in, around the Rafiabad belt of Baramulla district, is dominated by apple orchards, forests and meadows, where I would spend countless hours exploring and collecting tiny creatures, studying each to the finest detail. I studied fungi, fell in love with dipteran eyes, marvelled at hymenopteran life and much more. Of late, I find myself thoroughly entranced by a group of minute organisms found usually in moist habitats. Slime moulds, technically known as myxomycetes (myxos for short) or Mycetozoa.

It all began in 2017, when I first spotted a tiny, glistening mushroom-like creature growing on a piece of moist wood, while looking for Ascomycetes (sac fungi). My interest was piqued when I learned that this creature was in fact another form of the same slime-like organism that was creeping across the forest floor. How could a single organism exist in two different forms? I was intrigued, and wanted to find out more. 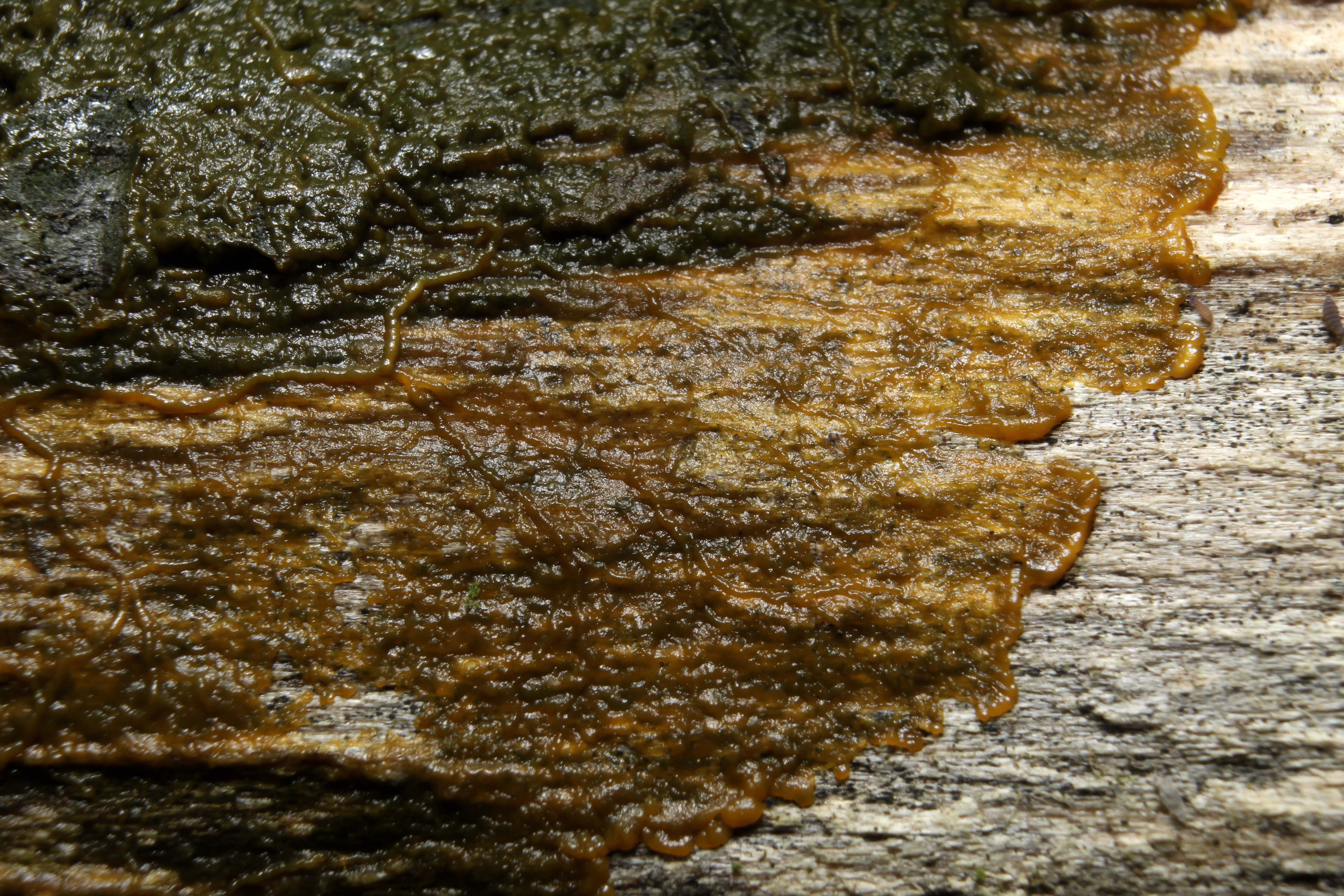 Myxomycetes are a phylum under the kingdom Protista. These remarkable living beings show characteristics of both protozoans (single-celled microorganisms) and fungi. And they have the insane ability to change their physical form based on prevailing environmental conditions. The pulsating network of slime that I saw that day on the forest floor can literally transform itself from an ‘amoeba’, a single-celled organism, to an otherworldly creature. Yes, amoeba! A single-celled, phagocytic organism. In its amoeba-like stage, when this blob swarms and forages on bacteria and fungi, it is technically termed as plasmodium.

When food becomes scarce, it brings its ‘primitive cognition’ to action and transforms into a procreative, shimmering, mushroom-like creature (which could sometimes resemble the appearance of scrambled eggs) to disperse its propagules, the spores. This stage is the fruiting body. That’s not all. If the conditions aren’t favourable – for example, if the temperature is too high or low or there is not enough moisture – the slime can turn into a hardened mass termed as sclerotium, a dormant form. Once favourable conditions return, the mass softens and the slime returns to life.

Given all these strange characteristics, classical taxonomists are puzzled about the correct taxonomic position of these ‘critters’. Even though they are fungus-like in appearance and animal-like in their feeding behaviour, they don’t seem to fit in with either. These creatures are unlike anything else on our planet. They were classified once as fungi but are no longer recognised as such, although the taxonomy, including the classification, is wholly based on their fungus-like stage. They are ‘acellular protists’, kingdom Protista – a non-phyllogenic assemblage of unrelated organisms.

Seen in three phases of maturity – (anticlockwise from top left) immature fruiting body, a transitory phase and after spore dispersal, Arcyria denudata are usually found on decaying wood. Slime moulds are single-celled protozoans with the ability to physically transform themselves during their lifecycles. Photo: Suhaib Firdous Yatoo.

Myxos have received very little attention from Indian taxonomists thus far. There are less than 400 reported species from India and less than 40 from Kashmir, when in fact, without exaggeration, I have more than 70 just in my own collection, all of which I collected from suburban areas around Zaingeer belt alone! The reason I have made mere approximations in statistics is because there are no revisions in this particular taxonomic domain from India. Many of the specimens described from India are not considered valid due to the reluctance of experts to rectify errors and respond to the queries of amateurs. Crateriella, for instance, is a genus described from India but has no existence according to the latest nomenclatural code (see the website www.nomen.eumycetozoa.com). There are more examples and each case is corrigible. There is not even a single book published till now on Indian myxomycetes. They need more attention and research, and funding from agencies.

There is not much data available regarding the role of myxomycetes in a given ecosystem. They are neutral organisms that feed on fungi and bacteria while serving as food for the same sometimes too. Only few myxomycetes have been studied enough for the scientific community to realise some interesting traits they possess – for example, Fuligo septica, commonly known as the scrambled egg slime, is believed to absorb heavy metals from the atmosphere and can be used to monitor atmospheric pollution. There are no specific threats that harm their existence, except of course for the usual culprits – habitat destruction and the loss of glacial caps to climate change. 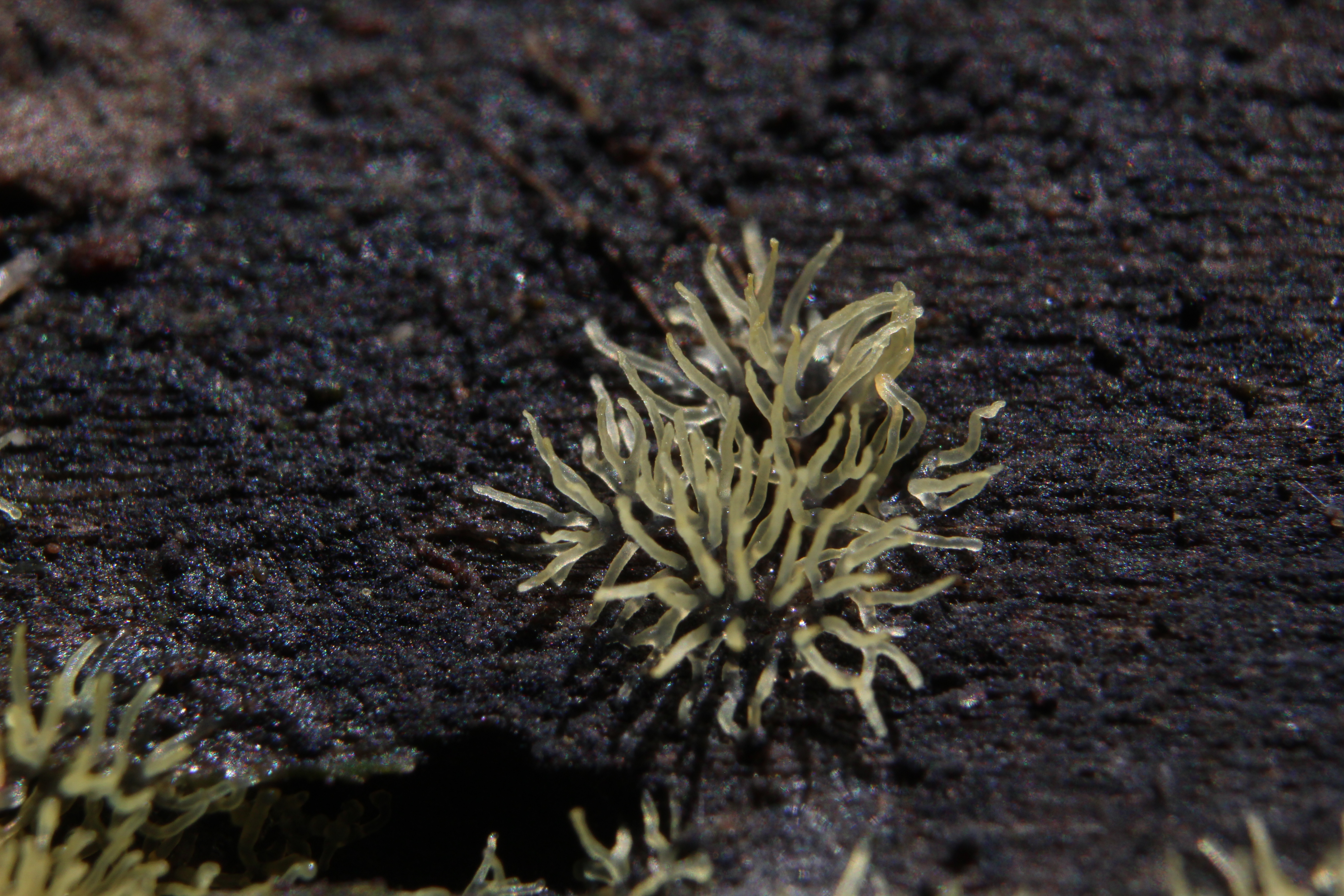 Commonly known as coral slime, Ceratiomyxa fruticulosa is the only myxo genus that has spores borne on branches instead of growing inside a closed structure. Photo: Suhaib Firdous Yatoo.

Not every Slime, nor every Mould, is a Slime Mould

Although cosmopolitan, myxos can be located in swarms (in large numbers), on moist forest floors, dead wood, rotting leaves, on fungi and elsewhere. They are by no means confined to moist habitats only, with some myxos even occurring in deserts!

Looking for myxos requires an experienced eye – one must be able to discern them from the slimy trails of snails, slime flux, cellular moulds and some food left-overs. Slime flux, commonly called bacterial wet wood, can sometimes be mistaken for a plasmodium-stage myxo, but it has no particular structure like that of a plasmodium and is always found on injured trees. It’s an association between fungi and bacteria. An experienced eye can easily differentiate myxos from cellular moulds. Most of the slime moulds are not even slimy.

Kashmir’s landscape, with moist forest trails clothed with apple orchards, good glacial cover and high humidity provide the ideal conditions for different species of slime moulds to thrive. Some may even be found growing simultaneously on the same piece of log. The author has a personal collection of 70 species, all collected from the Zaingeer belt, in north Kashmir’s Baramulla district. Photo: Ovais Shafi.

Kashmir in particular is a haven for myxomycetes, being dominated by forests, apple orchards, and with good glacial cover and high humidity. These tiny, overlooked, evanescent organisms can be located in large numbers on a single log of wood with numerous different species thriving together. You need to be a ‘leave no log unturned’ kind of a person to get a good collection of myxos. Wet forest floor with a variety of litter cover is ideal for diverse myxo growth and one would never fail to find such places in Kashmir. Some rare myxomycetes, being nivicolous (inhabiting regions above the snowline) in nature, would always prefer to grow around the edges of glaciers in Kashmir.

At present, my personal myxomycetes collection is from a single patch of land having only deciduous forest litter. My most prized collective that has always been the centre of my fascination is a sample of Lamproderma (a genus of slime moulds in the family Lamprodermataceae), which has an iridescent disco-ball like structure standing on a mini-pole. 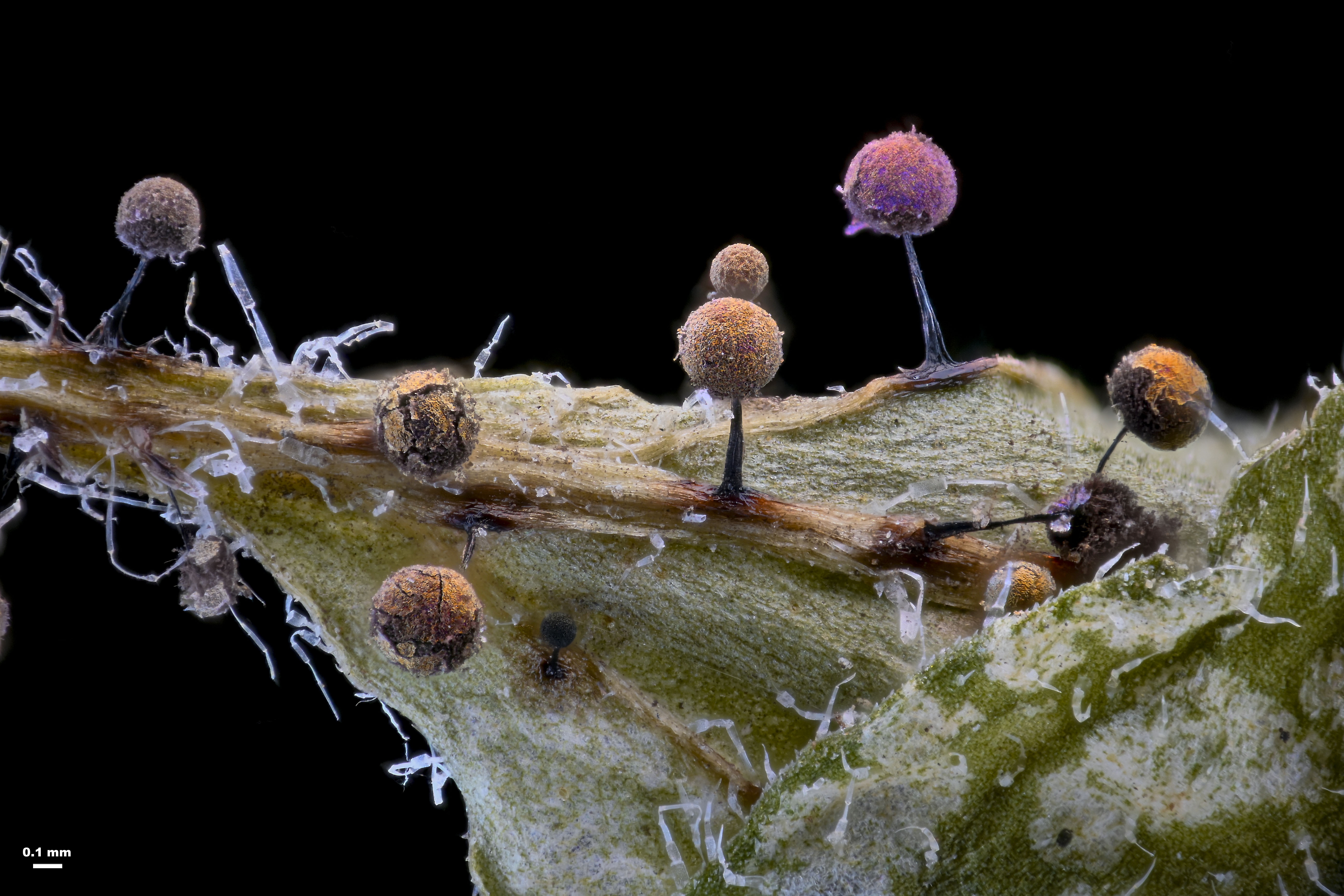 Lamproderma scintillans, a small slime mould at about one millimetre height, has a distinctive physical appearance with a sporangium globose tinted brownish, reddish, or bronze, sometimes even steel-blue and iridescent. It is usually found on dead leaves, and is one of the author’s most prized collections. Photo: Amir Maqbool.

I’m hoping to increase my area of observation and diversify my collection in the coming years and am working on creating my own photography setup, so that we could turn our collections into a book-cum-field guide, which would be the first of its kind from India and would help to bring these unexplored organisms to the limelight.

The sheer beauty, diversity, unpredictability and ambiguity of myxos makes them, to me, the most interesting creatures on planet Earth.

Collection and Preservation of Myxomycetes
It is said that ‘beauty is always short-lived’. We wish to preserve ephemeral beauty, but it is not always possible. But in the case of myxomycetes, it is very much so. They can last up to a century or more if preserved in the right conditions. And, unlike other preserved organisms, can be resurrected too!

Collecting these delicate miniscule organisms is an art. And it depends completely on the collector’s experience and technique. The collector must carry a scalpel, a small saw and small vials (I usually use saffron vials). Specimens must be collected along with the substrate. Only mature specimens must be collected for preservation while the ones not mature enough should be collected separately and, with utmost care, placed in a humid jar (to prevent desiccation) along with the substrate. Once collected, the specimens must be stuck to the vial base using an adhesive and then placed in a refrigerator for some time. But care must be taken to prevent any moisture. And then the specimen should be dried below 40°C. The immature ones collected should be placed in a moist chamber (plastic box with wet tissue in it) to complete their growth.

The specimens collected and preserved well can be resurrected by providing them the optimum conditions or by culturing them on agar plates.

A naturalist, amateur taxonomist and photographer, Suhaib Firdous Yatoo is Director of Research at the Centre for Biological Diversity, Wildlife Conservation Fund, J&K. He received the Sanctuary Young Naturalist Award 2020.