With its beak tilted skyward, a Magpie Robin sings from atop a lightning rod. It’s a snowball storyteller. About half an hour ago, it had just begun – two sweeping notes descending, followed by one rushing up and left hanging, unresolved. But now it has built on this motif and is rendering an elaborate song. I’ve come for a run on this road, which has fallen silent. I am accompanied by dog-walkers and fellow joggers. A Coucal sits on the divider and hoots deeply. The neem trees on the roadside murmur in a voice which is only theirs. And from above the thin metal pole of an apartment, the Magpie Robin sings on most mornings. Yesterday its song was starkly different, as my phone recording testifies. The theme of its tune rose and fell alternatingly, and overtime was embellished into a syncopated song. I remembered childhood days in my school campus when I would go birding during the breaks. On so many occasions I would think I’m hearing a new bird and excitedly search for it, but it would turn out to be a Magpie Robin. As I jog closer to home, robin song tapers behind and I enter cicada zone. Their loud buzzing from the rain tree trunks is on par with the boisterous local boys’ cricket match.

The Magpie Robin is an improviser. It never performs a set song repeatedly. It creates its music spontaneously each time it sits to sing. It chooses a couple of notes – hesitates – adds a few more – inserts inflections – plays with rhythm – pauses. Starts again – tweaks its tune – adds a nuance or two – shifts direction – stops. Starts again. Give it enough time and it would have created a complex and original song, which it will keep varying and furnishing till its singing schedule is over and it has to go about its foraging, or other work.

There are many improvisers among Indian birds aside from the Magpie Robin  – the Orange-headed Thrush, Sibias, Mountain Tailorbird, Yellow-bellied Fantail, Shamas and Abbott’s Babbler, to name a few. They sing spontaneously, composing on the spot. The Indian word for improvisation is ‘alapana’ – which is a Pali and Sanskrit word for ‘conversation’. Through their voices, birds dissolve the distinction between song and speech, making it difficult for our forms of description. This asks deep philosophical questions about songbird psyches. Neuroscience describes improvising as ‘one of the most complex forms of creative behaviour’. If so, birdsong then beckons enquiries into our notions of sentience. Is it something to be measured on a linear scale? Does it rather run on many planes? Does our own boundaries of sentience limit the definition of it? Birdcall researcher Jill Soha has discovered that several birds learn to sing by improvisation rather than imitation. They learn to sing by mostly figuring it out and playing with their voice on their own, which strangely brings to mind the famous words of the jazz improviser Miles Davis, “I’ll play it first and tell you what it’s called later.” 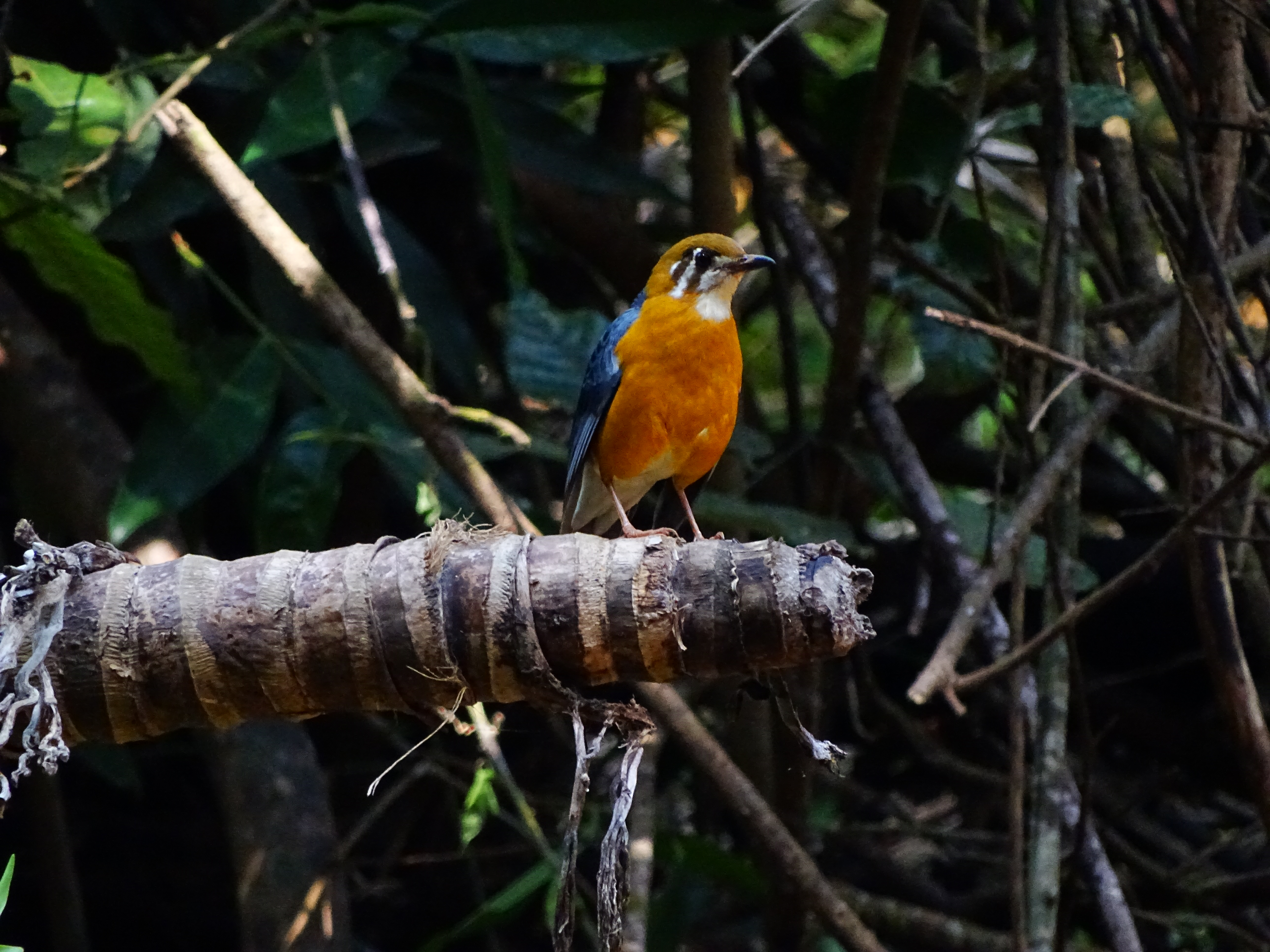 Another haunting and emotive singer among Indian birds is the Malabar Whistling Thrush. Its melody carries in the ear, imprints in the mind long after it is over. Its flow and fluidity evoke a river meandering in the Western Ghats. It chooses its podium – a stump shrouded in the mist near a forest stream or somewhere where the reverb is best in the wooded-soundscape. The first time I heard the Malabar Whistling Thrush was when I strayed off alone from our campsite during a school field trip in Grade 9. At the time I didn’t know of this bird and wasn’t able to spot the source of its clear lilting call in spite of frantic searching. It felt so human-like that I began to think it was something paranormal and started a brisk walk back to the group.

We are an ocularcentric species – especially the city-dwelling kind –leading techno-centric lives. We have come to treat vision as the only viable window of perception. Our other sensory portals – hearing, smell, taste, touch etc are fading in their use, in the ways only they can invoke the world for us. There is interesting research emerging on how 'ocular-centrism' and the superiority of 'vision' in our society, has played a role in creating dualisms in our perception – mind and matter, object and subject, intellect and affect, rationality and emotion, etc – by the very nature in which vision behaves, divorced from its sibling senses. But songbirds, whales, cicadas, bush crickets, are phono-centric species, just as numerous indigenous communities who have oral cultures which have existed for centuries without the written word. Are they then able to experience a less fragmented and divisioned reality? Perhaps. Shelly Lowe, a Navajo rights activist remarked that “what’s missing is not voices, but ears.” Her statement has a civil rights context, but it is also an apt metaphoric reference to our relationship and sensitivity with the more-than-visual world, or the lack of them.

Earlier this year in January I was on a field trip to Kaziranga National Park. Late afternoon congregation of jeeps in the Burapahar range, at the junction of grassland and marshland. Rhinos, elephants and water buffalo in the distance were wading deep in slush. Nervous hog deer scooted out of the nose-high grass. Many dozen cameras waited for a tiger to come out of cover. A jeep driver remarked that the big cat has just eaten and is not going to budge. Throughout this wait, high in the sky above the pachyderms was a tiny drifting fluttering form singing its heart out. A shrill, fervent, and complex song modulated by wind gusts. The Oriental Skylark for its courtship display flies up into the air till it’s a dark blemish in the firmament and renders its elaborate piece while incessantly hovering. I’ve been scouring through e-Bird, listening to skylark recordings from different parts of India. Each birdcall is shown as a spectrogram – which is like a sound river flowing across the screen. The positions of black lines on the graph indicate frequency. The higher they are placed the shriller is the pitch and vice versa. The intensity of the lines indicates loudness. And this illustrates visually what a bird call is shaped like. The Magpie Robin’s song is a theme-and-variation, which comes back to the same pattern after each strophe and then varies it, elongates it. The Whistling Thrush’s song follows a smooth step-wise motion, with the occasional fitful inflection. Skylark song however is an assortment of distinct sonic patterns one after another. On closer listening, it’s a progression of different calls – a mimicked repository of local birdcalls. Some of us listened to the skylark during our long (unsuccessful) wait for the tiger. Now you hear a drongo, then an Ashy Prinia, this sounds like a Thick-knee, this is surely Francolin, now a Tailorbird. In different geographies this bird’s staggering aerial mash-up displays seem to consist of common birdcalls in those regions.

Air, atmosphere, sound-space – these are nearly non-physical to humans. To songbirds and other vocal creatures, these are essential for their communication, courtship, territory marking, expression. A couple of years ago, an interlinking road was constructed opposite my apartment, to decongest traffic on two outer main roads. Across my balcony is a large sprawl of fenced off, unbuilt land, dense with neem trees, ash trees, prosopis, and grasses. In the mornings, the Pied Bushchat and the Magpie Robin would sing from the barbed-wire fencing. On patches of sand and around puddles a pair of Pied Wagtails would waddle about and serenade brightly. The road came adjacent to this habitat. Roads, vehicles, machines treat soundscapes as dumpsites. With incessant engine rumble and blaring horns, these birds vanished from here quickly, even though their physical habitat remained intact. Noise denied them their right to sing. Studies are also emerging revealing how birds are changing their songs, pitching them higher and louder in city soundscapes, to be heard. While others show that songbirds simply vanish, move away beyond certain thresholds of anthropogenic noise. Lockdown, and the brief quiet it has brought, seems to have invited the Magpie Robin back to my street.

The philosopher Tim Ingold said “with vision we are at the edge of things. With sound we are always in them.” The perceptual fields of numerous birds are profoundly auditory. Most of their experiential world is ‘sound’ in its plenteous shapes, forms, and meanings. Theirs is a ‘world-hearing’ much more than a ‘world-view’. And by paying attention we may perhaps discern the edges of this, nurture an empathy and kinship for beings with other ways of knowing and seeing. What vividness does the world acquire through a Thrush’s ears? What inspires a Robin’s new tune each morning? What might a Warbler feel when a highway appears by its wintering grove? To listen is to wet one’s feet on a different shore of perception.

M. Yuvan is a naturalist, writer, educator and activist based in Chennai. He has spent many years developing Earth-centric and child-centric education curriculum in schools and has been part of various social and environmental campaigns across India. His book A Naturalist’s Journal is a collection of essays about our countryside wilderness.