Text and Photographs by Vijay Bedi

In Dadara, a village on the outskirts of Guwahati, a unique conservation story is unfolding. A giant bird that resembles an old bent man with a rather long beak has been fighting a tough battle for survival.

But one woman’s intervention is helping turn the tide for the Greater Adjutant Stork – locally known as the hargila, which translates to “bone swallower” because the storks sometimes swallow whole bones.

With less than 1,200 individuals left in the wild, this was a bird desperately in need of rebranding. Greater Adjutants often bring rotting flesh to feed their hatchlings. Villagers saw the birds not only as a bad omen but even a plague due to their scavenging habits and labeled them ‘ugly birds’ that were unwelcome. 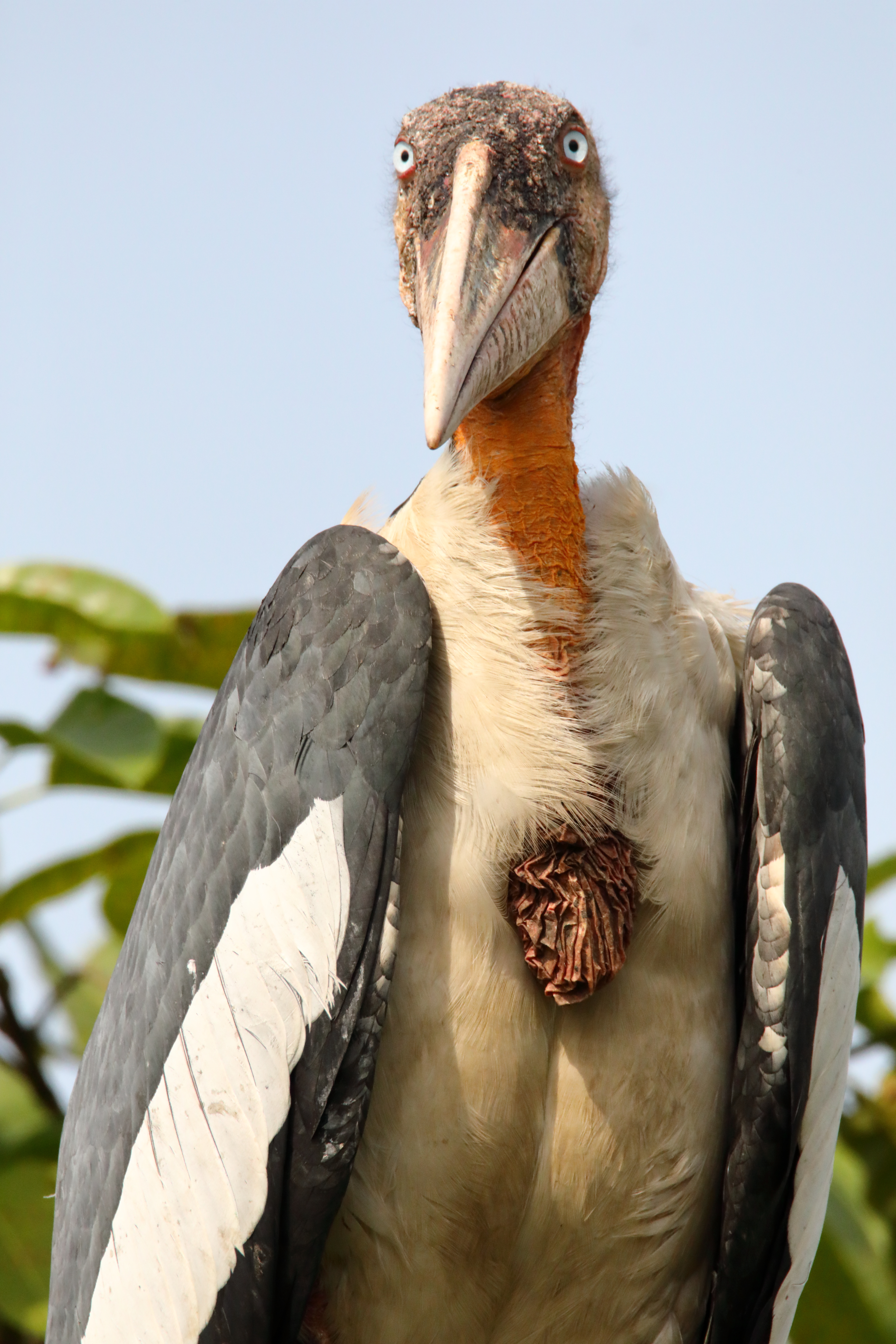 The Rarest Stork in the World
Once found across South and Southeast Asia (from Pakistan to Borneo), today, the Greater Adjutant Stork is only found in Assam and Bihar, with smaller populations recorded in Cambodia. These storks have a distinctive light orange sac dangling from their necks, which turns a deep orange and red during the breeding season. Greater Adjutants are great pest controllers, keeping the populations of smaller animals like rats and other pests to a minimum. They also help clean up the environment by eating decaying animal carcasses, thus controlling the spread of diseases among human communities. In the 19thcentury, huge flocks of the birds, numbering to hundreds of thousands of individuals, were known to congregate. The global ecocide in the following century that resulted in the destruction of their wetland habitats across Asia led to their rapid endangerment. With a vocalisation that is far from melodious (it emits more of a grunt), an appearance that can be likened to a wizened old man, and an awkward gait that inspired its military name, the species has been hastily deemed ‘ugly’, leading to an oversight in conservation efforts. In the 1990s, its population was found to be no more than 1,000 individuals, making it one of the stork species closest to extinction. Improper waste management that leads to an influx of garbage being dumped into wetlands and felling of nesting trees have relegated it from being one of the most commonly seen storks to the rarest.

My brother and I are keen to document the lesser-known species of India. We were commissioned by the Public Service Broadcasting Trust to make a film on Purnima Devi Barman’s journey to save the Greater Adjutant Stork – we called the birds the ‘Hargila Army’. While studying them for her doctoral research at the Guwahati University, Barman noticed a disturbing trend. The birds were abandoning their historic nesting grounds in rural wetlands and choosing instead to nest on treetops near villages. The birds often feed near wetlands, which over the years, have turned into massive garbage dumps for Guwahati city. 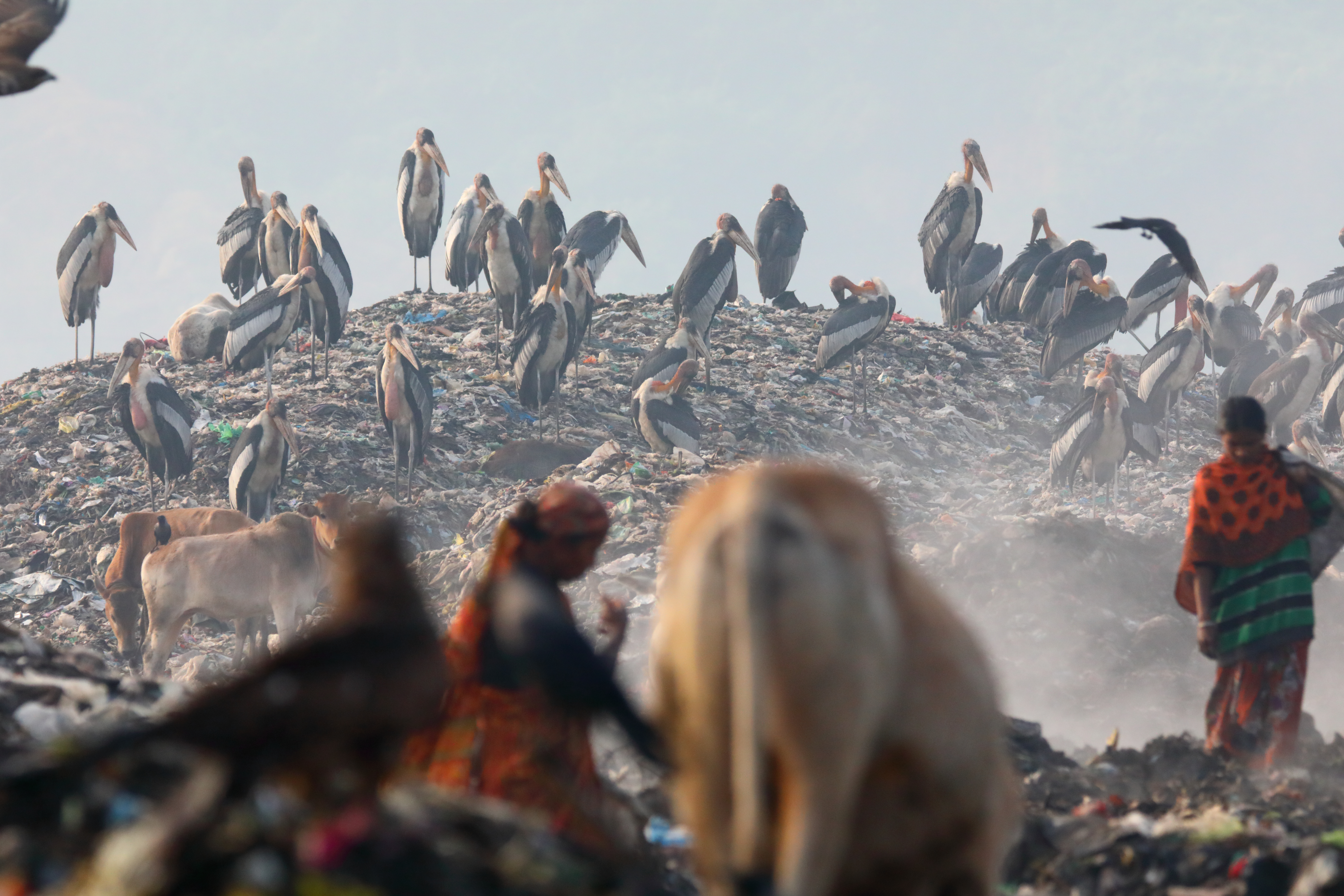 Apart from massive deforestation, which has led to the loss of nesting trees, a major threat to the species is the huge dumping of toxic garbage in their feeding grounds, which could potentially cause fatalities from disease-causing pathogens.

In Dadara, many of the nesting trees for the stork are found in the middle of the village. Several were cut down by the community, effectively wiping out the nesting spaces. Purnima knew that she had to change the villagers’ perception of the species and enlist them in conservation efforts. She began focussing on changing community attitudes. She first enlisted women, convincing them of the importance of protecting these birds and their role in the ecosystem. Her friendships with women helped her to gain access to the private yards where the birds were nesting.

One of the experiments initiated by Purnima was to create artificial nesting platforms made of bamboo. And in the process of filming, we received the news that one nesting pair had started using the platform to incubate their eggs! The entire village gathered to cut a birthday cake to celebrate the arrival of the baby storks! It was the first time that an artificial nesting platform of this kind worked in India for an endangered bird. This experiment may prove to be a long-term answer to saving many threatened large bird species that suffer from the destruction of nesting trees. Purnima is now extending her research in precisely this direction, by exploring the possibility of scaling up the efficacy of nesting platforms for conservation. 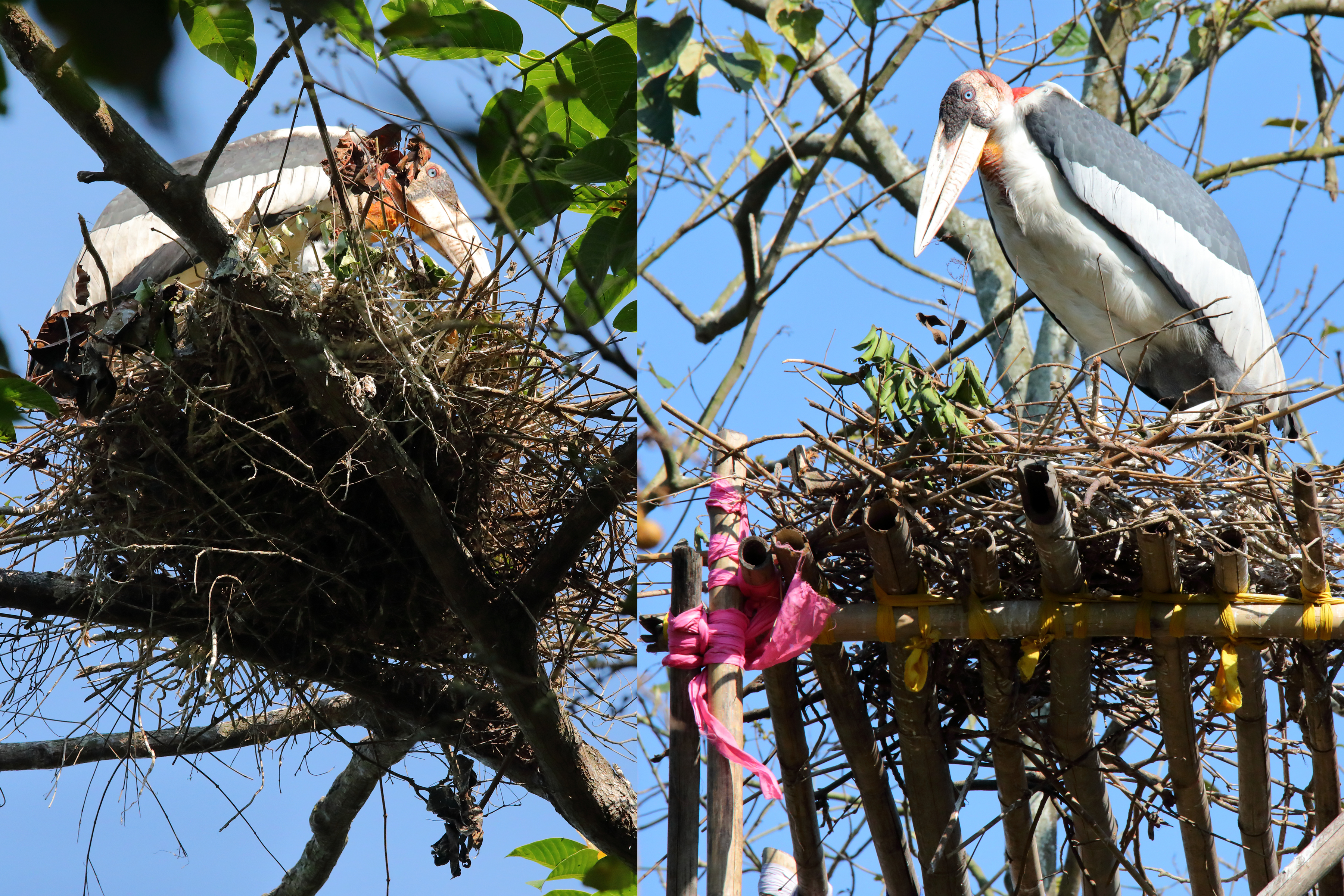 In Guwahati, as wetlands disappear, Greater Adjutant Storks choose to nest on tree canopies near villages. A pair of storks use artificial bamboo nesting platforms created by Purnima Devi Barman in Dadara. This innovation can now be scaled up to save many threatened large bird species whose nesting trees are being lost in Assam and elsewhere in the country.

Another experiment initiated by Purnima was to train the community women in weaving the motif of the Adjutant Storks on traditional handloom items such as the iconic gamcha (scarf). These hand-crafted products are sold at a premium and the money generated goes back to the community.

Our film ‘The Stork Saviours’ traces how Purnima Barman rallied village women to protect the bird through a panoply of initiatives. The film was shortlisted in the Global Voices category for the Jackson Wild Media Awards, believed to be the ‘Oscars’ for nature films!

In 2007, Barman counted 28 Greater Adjutant Stork nests. Today, she says there are more than 200 nests in the villages! The story of the people of Dadara and their mission to save the storks is already part of local legend. What makes the entire adventure even more gripping is that the film followed the story line dictated by the mission, which is as much about the bird as it is about the community that chose to protect it.

Storks Around the Globe

Storks – of the family Ciconiidae – include 20 species of large avians characterised by long necks and beaks, and nearly bald heads devoid of feathers. Six of these species; Lesser Adjutant Stork, Greater Adjutant Stork, Milky Stork, Storm’s Stork, Oriental White Stork and Shoebill; are considered either ‘Vulnerable’, ‘Endangered’, of ‘Special Concern’ or ‘Indeterminate’. Aside from these, nine additional species are threatened across the world at a regional level. The Ciconiidae family is loosely related to herons, flamingos and ibises and are found across Africa, Asia and Europe, with one species occurring in Australia and three in the Americas. Three storks – Lesser Adjutant Stork, Greater Adjutant Stork and Marabou Stork – are scavengers. Several captive breeding programmes have been in progress around the world to save the highly endangered storks from extinction. Notoriously difficult to strategise and implement, these programmes deliver varied results. The Milky Stork, which occurs in the wetlands of Malaysia, Indonesia, Cambodia and Vietnam, is threatened mainly by agricultural expansion that wipes out its habitat. A seven-year reintroduction programme that involved the release of captive bred individuals was carried out in Malaysia, which was found not to be entirely successful, due to the birds being ill prepared for life in the wild, especially in a habitat that had shrunk largely over time. Tropical Life Sciences Research has been suggesting improvements to the programme in recent years. A captive breeding programme was launched in 1996 when the Oriental White Stork faced local extinction in Japan and South Korea majorly due to pesticide contaminating their habitat. The first phase of its reintroduction was in 2013 in South Korea, and 2005 in Japan. The programme in Japan began with six individuals translocated from Russia in 1985, nurtured to around 100 by 2005. Currently, about 2,000 to 2,500 individuals are known.

Vijay Bedi and his twin brother Ajay Bedi won three National Awards in 2019 for the first natural history film devoted to the amphibians of India. They are the youngest Asians to have won the Green Oscar for their film and also the only Indians to have won a nomination at the Emmy® Academy of Television Arts & Sciences for their natural history film ‘Cherub of the Mist’ on the red panda. Based in New Delhi, they are keen on visual storytelling that celebrates the lesser-known species of India.