Text and photographs by Soham Kacker

A pristine, undulating landscape stretches as far as the eye can see. Crowned on the horizon by the mighty Himalayan ranges, the vast plains of the Tibetan plateau seem to be, at first glance, entirely devoid of all life. Sandy and barren, they look almost alien. However, hidden within the rocks, grasslands, ravines and mountain streams of Ladakh is one of the most unique and fragile ecosystems on earth – one best explored on foot. The vast expanses of open ground tinged with purple, yellow and white wild flowers; the musky scent of the herbs growing in the shadows of the cliffs; the succulents secreted away amongst the giant boulders; and the tufts of grasses quivering in the breeze, spilling over the bluffs and crags, all hint at the story of a natural paradise. Trekking for hours through this breathtaking terrain, I began noticing this abundance of life first hand, and in exquisite detail. Protected thus far by eons of evolutionary adaptation, these habitats and species now hang in a precarious balance.

Perched at an average of 3,000 m. above sea level, Ladakh is classified as a high-altitude desert, blanketed in ice and snow during the winter months, with little to no rainfall during the summer. The soil is poor, the air is thin and dry, and the conspicuous absence of all large flora such as trees (except along river banks) exposes much of the landscape to the sun. It is these extreme conditions that have resulted in a floral diversity uniquely adapted to this region. 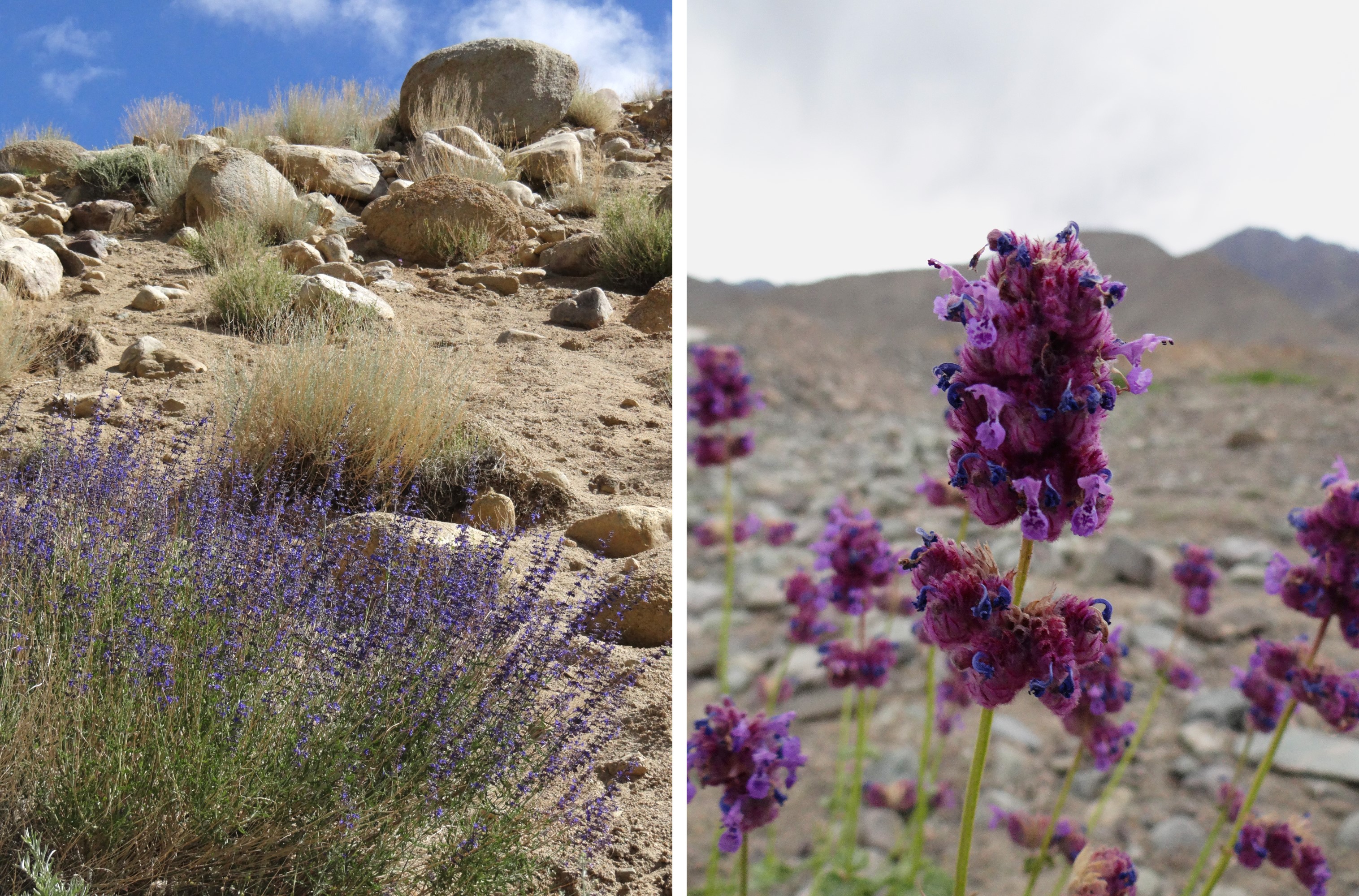 LEFT Purple flowering shrubs of the Russian sage Perovskia abrotanoides outside Yangthang village, Ladakh, offer a sweet-scented and colourful contrast to the rocky, barren landscape. RIGHT The hairy catmint Nepeta floccosa sports bright coloured flowers arranged in dense woolly whorls, and tints that range from pinkish-mauve to blue. These attract pollinators during the short flowering window between June and September.

Most plants here share certain common characters – form, size, colour and texture of leaves or thorns that caught my trousers as I brushed past them. The plant life in Ladakh is extremely tolerant towards drought, varying temperatures, and nutrient-poor soils, and possess remarkable adaptations that enable them to thrive in this exacting habitat. Most plant life has adapted to counter two main natural stresses – the lack of water and the harsh sun. To maximise the use of water, plants evolved strategies centred on adaptations of form and foliage.

On rounding a corner on a steep rocky path, I spotted a bank of beautiful plants with their tight rosettes of heart-shaped leaves and sprays of delicate pink flowers growing on the harshest and driest of rock faces. Plants such as the tiny bluish-green Bukiniczia cabulica have succulent leaves with a thick surface of specialised waxy cells to prevent water loss by evaporation. Some like the golden corydalis Corydalis govaniana have developed an enlarged root, or caudex, in addition to succulent leaves that act as storage organs for water and sugars. This reserve stock helps the plant survive the desolate winter months. Gerard’s joint-fir Ephedra gerardiana, in fact, has abandoned leaves altogether and adapted its stems to photosynthesize and serve other functions of leaves. In extreme conditions, the plant abandons even these photosynthetic stems, and produces flowers and fruits directly from the roots! I was rather taken aback when I first saw this plant on the steps to a monastery, looking like nothing more than a cluster of orange berries growing from the rock!

To grow in the harsh sun, plants develop other strategies. Plants such as the sea wormwood Artemisia maritima have a bluish-grey (glaucous) foliage comprising tiny hairs called trichomes downing their leaves and acting as a natural sunscreen. 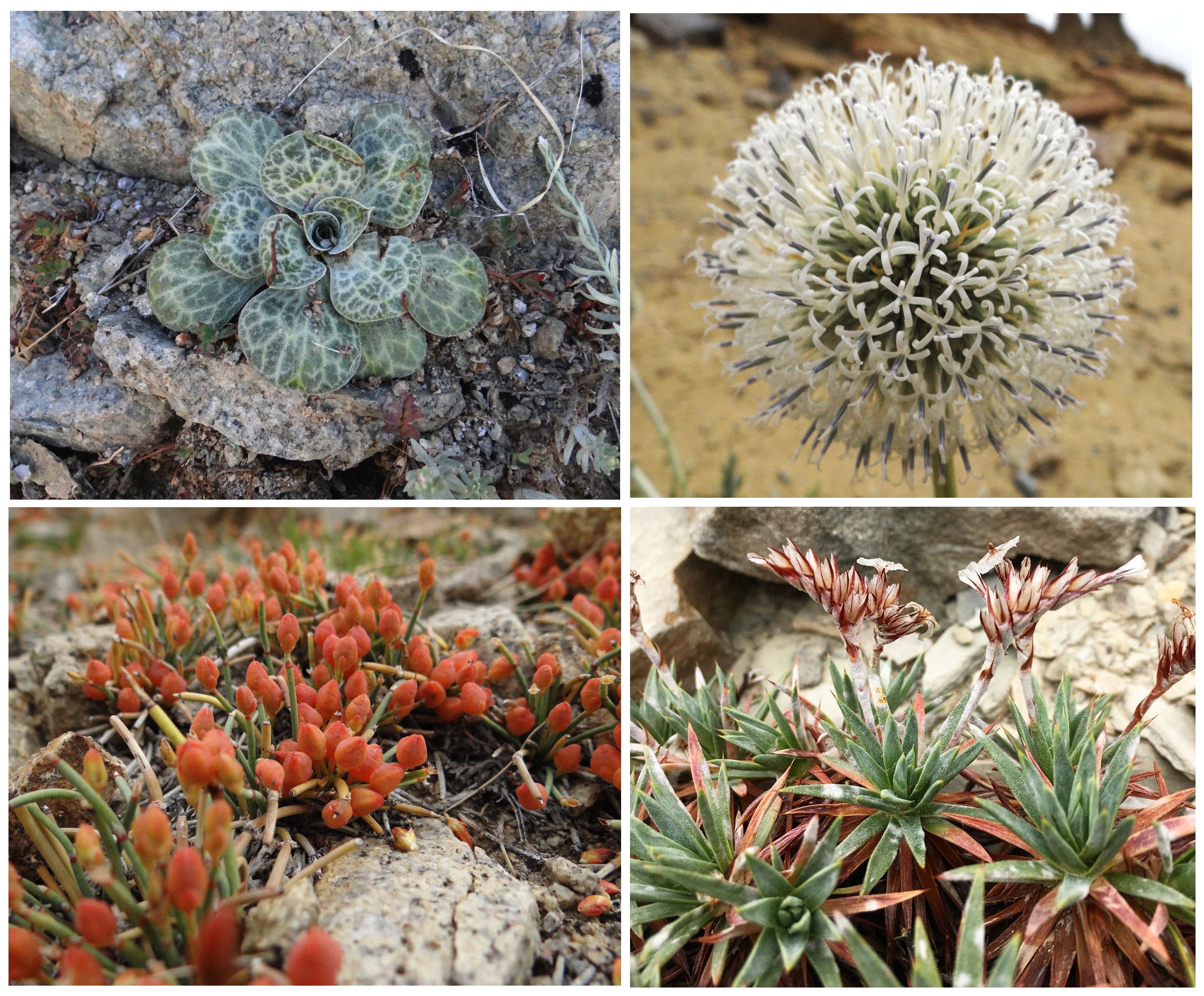 In such harsh environments, the lack of resources forces plants to be efficient. The struggle for survival is heightened by the fact that they only have a short season to mature, flower, and disperse their seeds before going dormant for the winter. This small window jumpstarts a reproductive desperation characterised by various floral adaptations. Plants such as hairy catmint Nepeta floccosa and blunt-leaf inula Inula obtusifolia produce conspicuous, brightly coloured purple and yellow flowers to attract hard-to-come-by pollinators. The Himalayan rose Rosa webbiana and golden fleece flower Tanacetum gracile exude volatile fragrances to lure insects. When I walked through a field of inula and catmint, I could hear the constant, steady buzzing and humming of hundreds of bees at work. Clearly, the plants know what they are doing. The sparsity of flora also means that the plants that manage to survive become immediate targets for hungry herbivores. But they have ingenious ways of protecting themselves. Some, like the giant Himalayan globe thistle Echinops cornigerus bear sharp  spines on their stems, leaves and flowers that dissuade mountain goats from browsing on them. Himalayan wild chrysanthemums Pyrethrum pyrethroides pack their leaves with distasteful oils that deter pests.

Such specialised traits have enabled these plants to inhabit an ecosystem that is inaccessible to other species. However, these same adaptations also make them vulnerable to climate change. A recent study in the journal Nature used satellite mapping of various environmental parameters such as cloud cover, temperature and rainfall to develop a quantitative means for measuring the vulnerability of ecosystems to climate change. It found alpine and tundra ecosystems to be some of the most vulnerable (Seddon et al. ‘Sensitivity of Global Terrestrial Ecosystems to Climate Variability’, Nature, 2016). The researchers developed a vegetation sensitivity  index, which studied climatic variations over 14 years and correlated it to changes in the plant composition and health in ecosystems to give a measure of which areas are the most prone to disruption. Ladakh was found to be one. 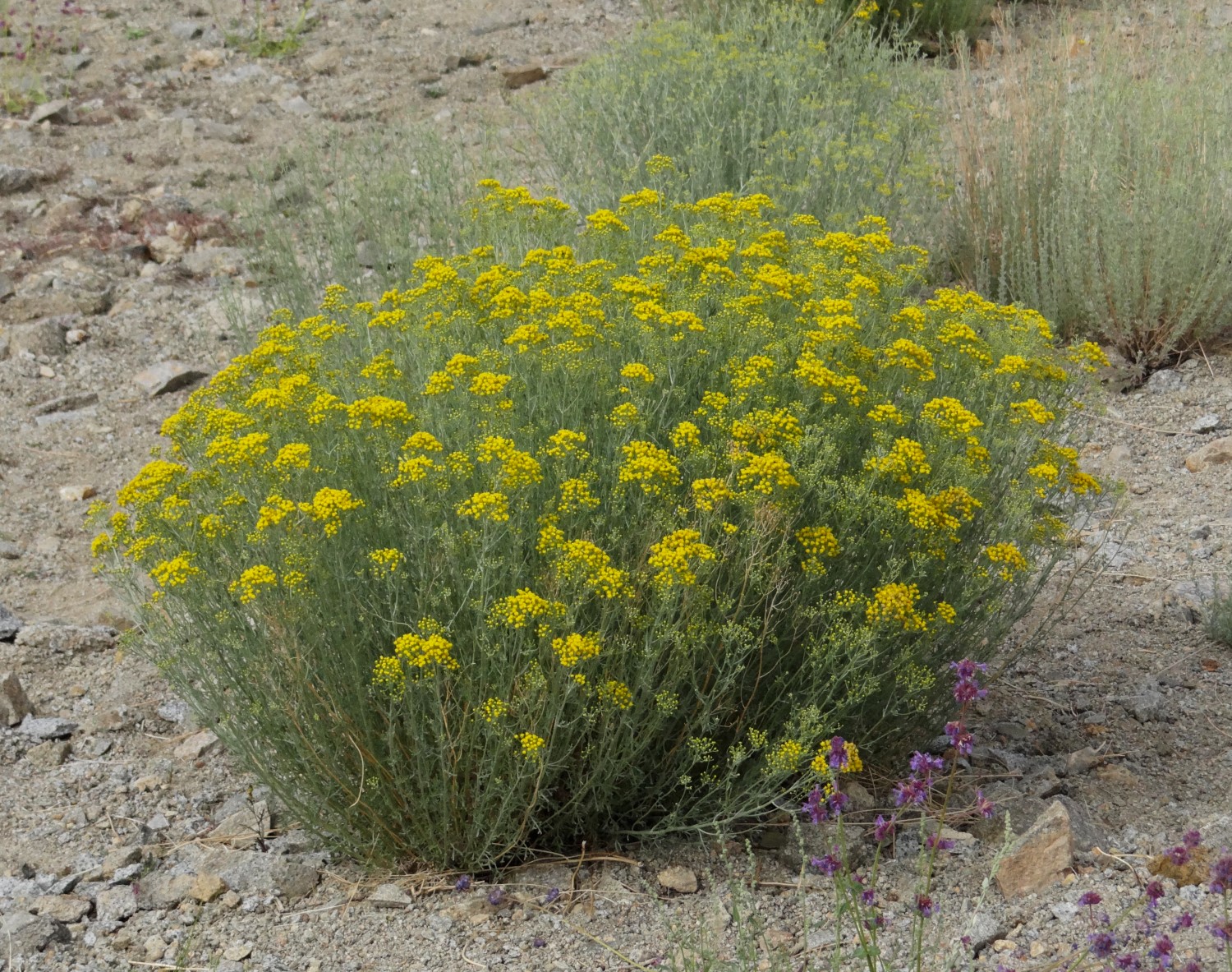 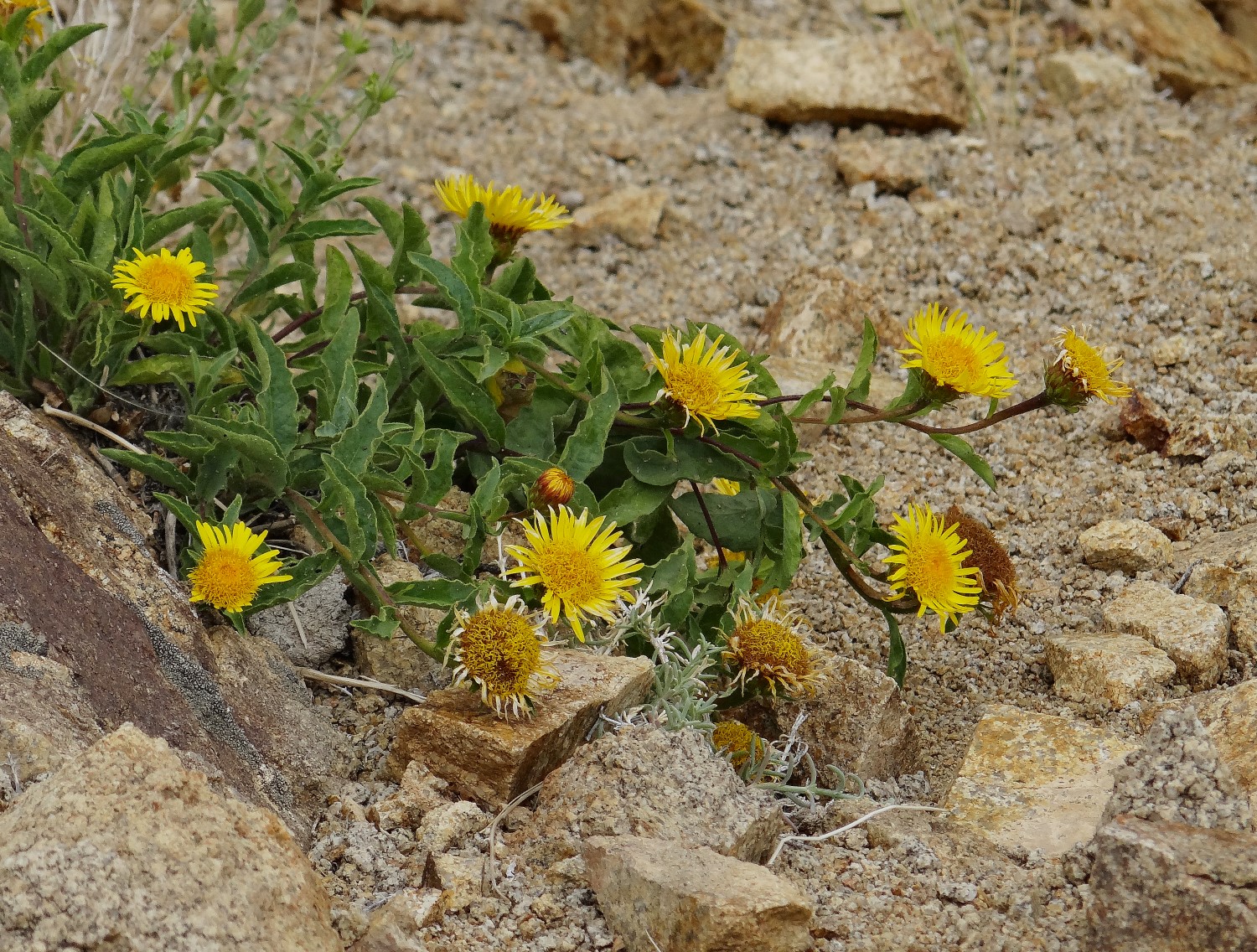 Finding shaded spots in crevices, scree, cliffs and slopes, the blunt-leaf inula Inula obtusifolia are easily identified by their yellow, aromatic blossoms between June and August.

It is vital to bear in mind that these warning signs come not only as statistics in a research paper, or the words of climate scientists and ecologists. They are phenomena with current and tangible consequences whose ramifications are already observed in ecosystems and the communities which inhabit these locales. While trekking through villages, I saw the traditional mud and wood houses increasingly replaced by those constructed from stone and concrete.

The friendly family running the homestay I visited in Likir village told me concrete houses were becoming popular because increased rainfall erodes the mud structures. Around 20 years ago, rain was rare in Ladakh, and the prevalent form of precipitation was snow, which the traditional flat-roofed mud houses were well-equipped to handle. Increased rainfall has also altered the hydrological cycle to which plants have adapted to survive. This has led to increased landslides and erosion. What is more, desert species will be threatened by rot and disease if their habitats become wetter. Many flowering plants depend on climatic cues, such as long dry spells followed by sudden rains that trigger their reproduction and flowering. Untimely rains could also imperil plantenvironment relationships.

Ladakh has gotten significantly warmer over the past years. A report on the climate change vulnerability of alpine ecosystems in the Eastern Himalayas (Tse-ring et al. ‘Climate Change Vulnerability of Mountain Ecosystems in the Eastern Himalayas’), International Centre for Integrated Mountain Development, 2010, conducted by the International Centre for Integrated Mountain Development in Nepal in 2010 stated that “significant warming has been observed on the Tibetan Plateau, with warming more pronounced at higher altitudes than lower ones”. Warming and increased rainfall results in the vertical migration of plants from lower to higher altitudes. Effectively, the monopoly that the native flora held over the resources present in Ladakh will now be jeopardised. Simultaneously, ecosystems at lower altitudes become drier and warmer, forcing plants there to migrate as well. This could have monumental implications, as it would leave Ladakh open to invasive species, disrupting local diversity.

Ladakh’s ecosystems face other threats too. Several species here are formally recognised by science in that they have a Latin name, and fit into the taxonomic system, but little is truly known about them. In cases like the prickly thrift and Bukiniczia, no estimates have been made of populations, and no studies have assessed threats. No one knows how many of Ladakh’s plants are endangered. As a result, there are no plans to protect and conserve them. 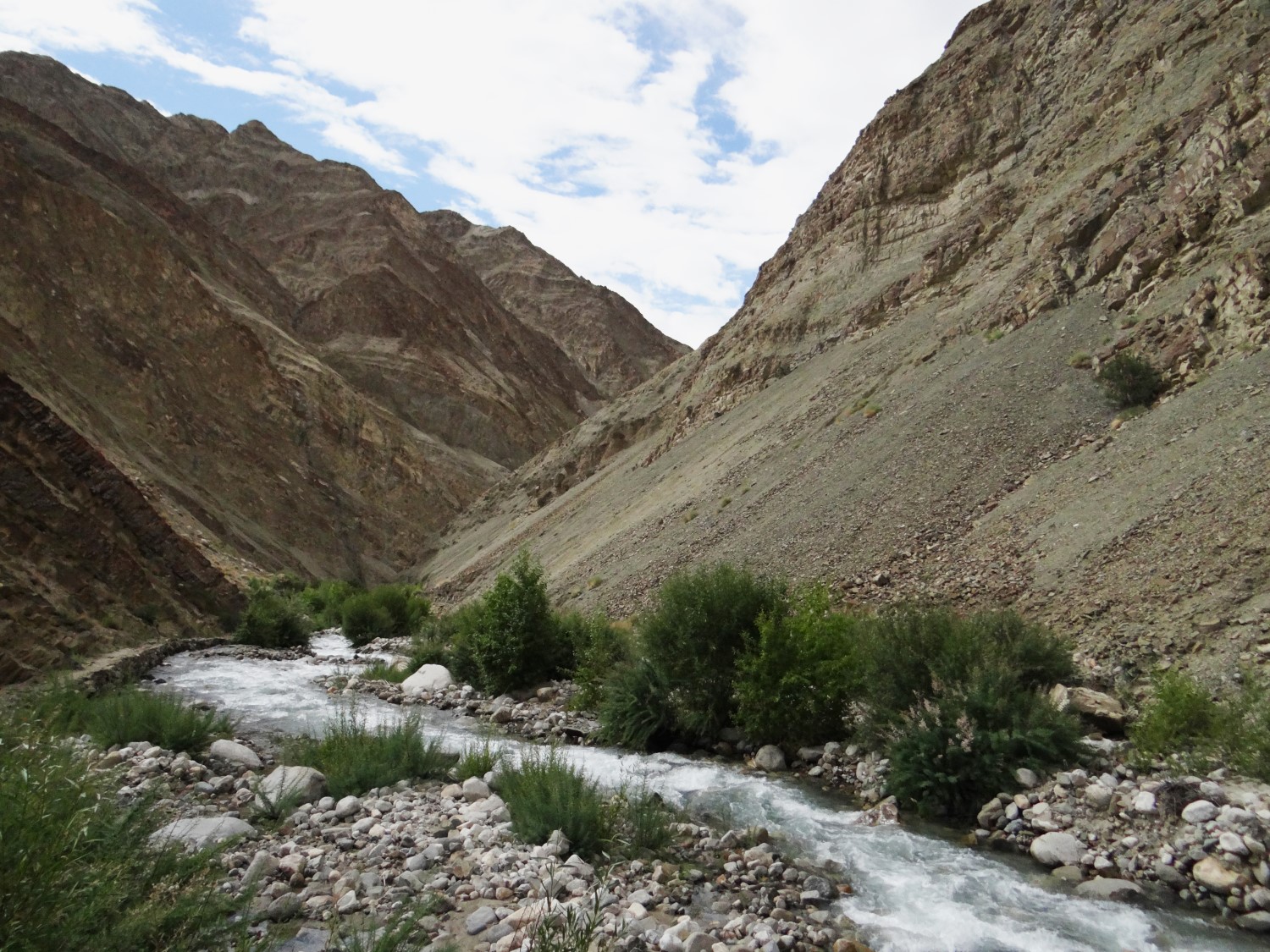 A Sliver of Hope

Nevertheless, in what seems like a narrative fraught with warnings of impending disaster and ecological unravelling, there is hope. After years of being in the shadows, Ladakh’s flora is finally being brought to the limelight by those striving to better understand it. Coherent lists of species of various regions are being compiled by ecologists. Plants – especially those of medicinal and economic value – are being researched and protected. Locals in Hemis Shukpachan village shared with us their enthusiasm in conserving the native Himalayan juniper tree Juniperus indica. They seemed hopeful of its reintroduction to the valley, and feel a sense of pride in having a thriving grove of these sacred trees in their village. “Guards protect the saplings day and night, so that no one plucks them,” a shopkeeper told us, beaming. It is only by raising awareness about these ecosystems and observing the life they foster that we can conserve them.

Ladakh is an ecological treasure-trove hidden in plain sight, and that is in part what has kept it protected thus far. Ironically, its conservation now depends on its discovery. Documenting Ladakh’s ecosystems and disseminating information about them is a vital step towards ensuring their survival. What seems like a lifeless desert at first sight hides a vast and brilliant diversity just beneath the surface – one worth cherishing and protecting.

I smiled as I flipped through the pages of a pamphlet on the medicinal plants of Ladakh on the coffee table of my hotel in Leh – it was written by a local environmentalist and published by a local press. Perhaps the first buds of change were already beginning to bloom.

Currently pursuing a bachelor’s degree in the biological sciences from Ashoka University, Soham Kacker is passionate about plants. Based in New Delhi, he has apprenticed at the Auroville Botanical Gardens and the Aravalli Biodiversity Park.