When Delhi residents found an injured Greater Flamingo in a park, they immediately called Wildlife SOS and Delhi Zoo, who came to the beautiful bird’s rescue...

In May this year, residents of Safdarjung Enclave in Delhi were shocked to notice a Greater Flamingo Phoenicopterus roseus hopping about in a park nearby, clearly injured and unable to fly. They couldn’t figure out how the bird had got there, as the park was quite a distance from any wetland habitat that the bird could have come from. Concerned, they immediately reached out to the Wildlife SOS (WSOS) rescue team, who arrived at the park and saw that the bird’s right wing was severely injured. The Wildlife SOS rescue team was able to safely take the injured bird out of the park. They quickly rushed it to the Delhi Zoo, where appropriate medical facilities were available. 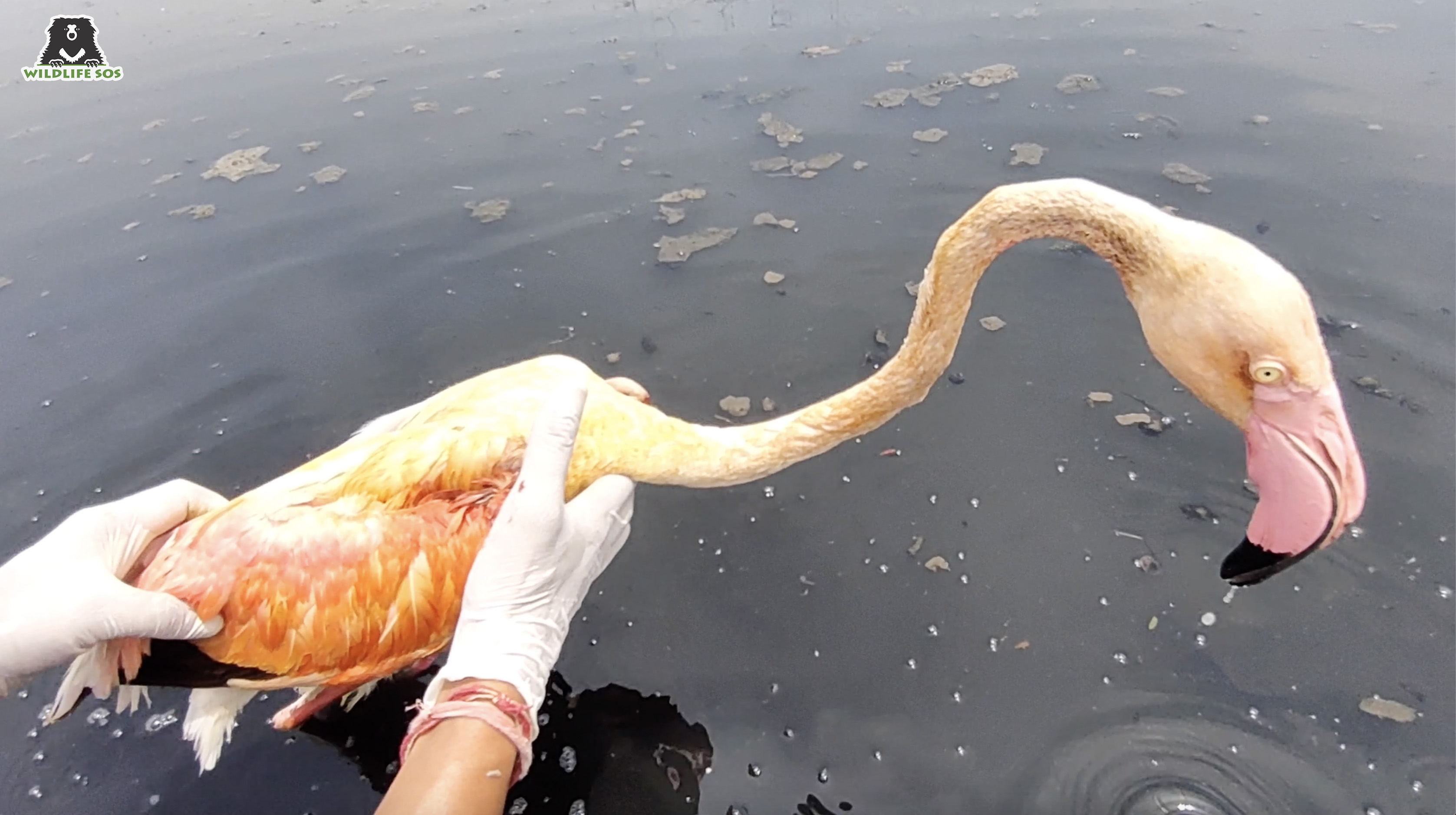 The Pink of Health

The Delhi Zoo was happy to take the bird in temporarily. Nearly four weeks of treatment later, the flamingo had fully recovered and veterinarians at the zoo agreed that it was time to release it back into the wild, where it belonged. WSOS reached out to the Delhi Bird Foundation (DBF) to plan a smooth, safe release into an appropriate habitat. Experts at DBF identified the Najafgarh wetlands (sadly this wetland is often referred to as the Najafgarh drain, highlighting the lack of importance given to wetlands in India) as the ideal place, since there was a resident flock of Greater Flamingos there that the rescued flamingo could join. According to a recent bird census this wetland is home to 54 waterfowl species including Black-winged Stilt, Black-headed Ibis, Black-tailed Godwit, and Painted Stork. It has a healthy migratory bird population. And so the two teams set off to Najafgarh.

Upon reaching the wetlands, they found themselves facing a challenge – the flock of flamingos was at least a kilometre away from the bank. The flamingo would have to be released much closer to ensure that it easily integrated into the flock. Some calls were made, and a boat was arranged to take the flamingo a few hundred metres closer to the flock. The boat approached cautiously, to avoid disturbing the birds, and then the bird was released. Breath held and fingers crossed, the rescuers watched it slowly take off. They exhaled and realised they didn’t have to worry at all – the flamingo began feeding in the water immediately! 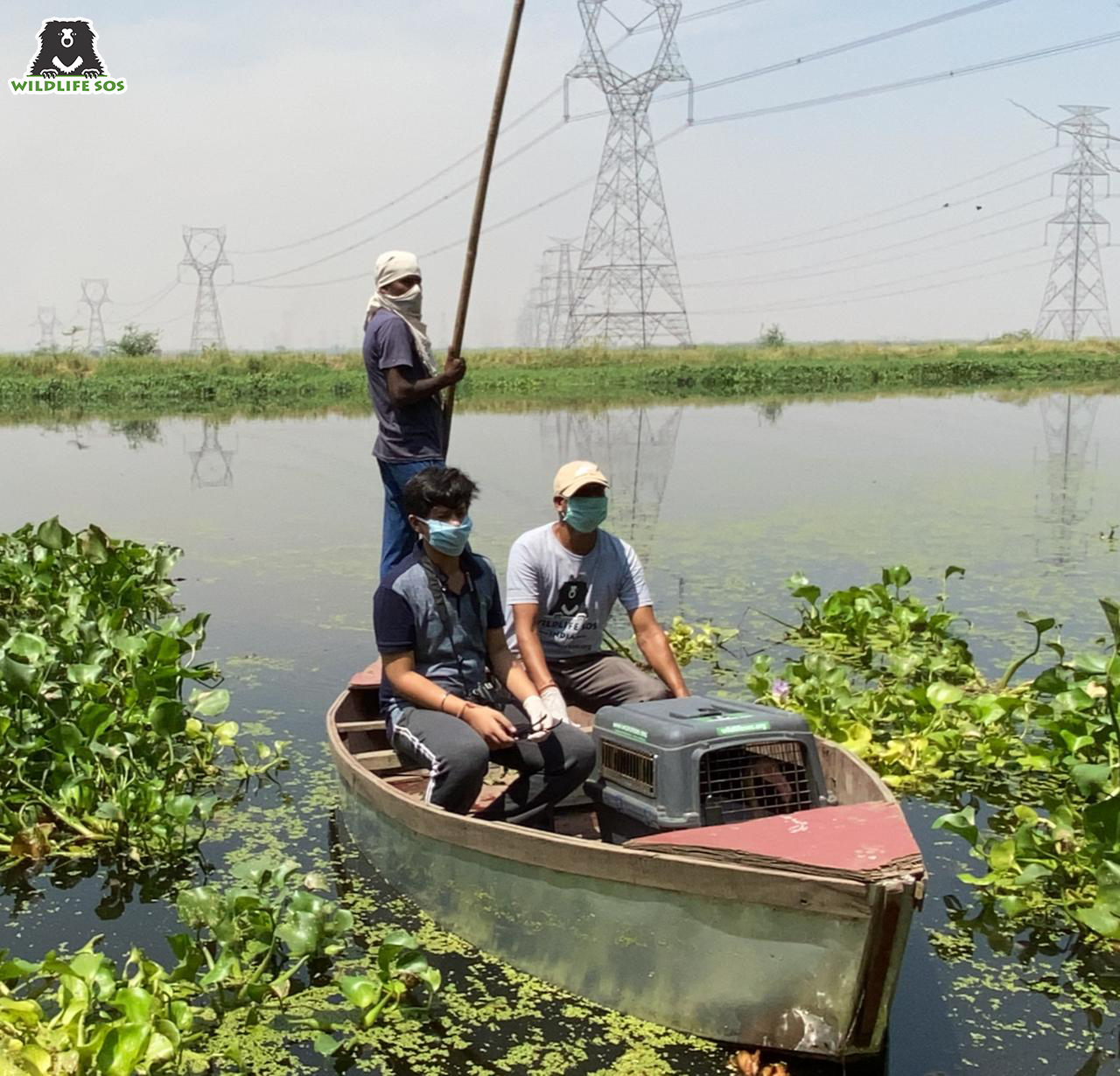 Greater Flamingos are characterised by their large, elegantly poised, strikingly pink bodies. They have long, curved necks and black-tipped bills. They are native to Asia and Africa and breed in the shallow waters of undisturbed wetlands. Though they are widespread, they are threatened by habitat degradation due to pollution and urbanisation.

Wildlife SOS is one of the largest nonprofit organisations in South Asia dedicated to the rescue and ethical release of wild animals in distress.