Tints And Hues Of Gir

The passage of seasons is marked by a flourish of colours that sweep across the deciduous forests of Gir, Gujarat. Summers between March and June, turn the forest bronze, with grasses turning gold and trees brown. The heat now weighs heavy on the land as the canopy cover falls away. By May, the forest floor is clothed by a leaf litter carpet. Occasional winds cause dry leaves to rustle, producing a melody that defines forest summers. Water now virtually disappears, and the Forest Department creates artificial water sources where wildlife congregate. This is when the ‘ghost tree’ Sterculia urns sheds its leaves, but, unlike most other trees, its bare branches continue to sport dense orange-red flowers that droop downwards from the ends of its branches. 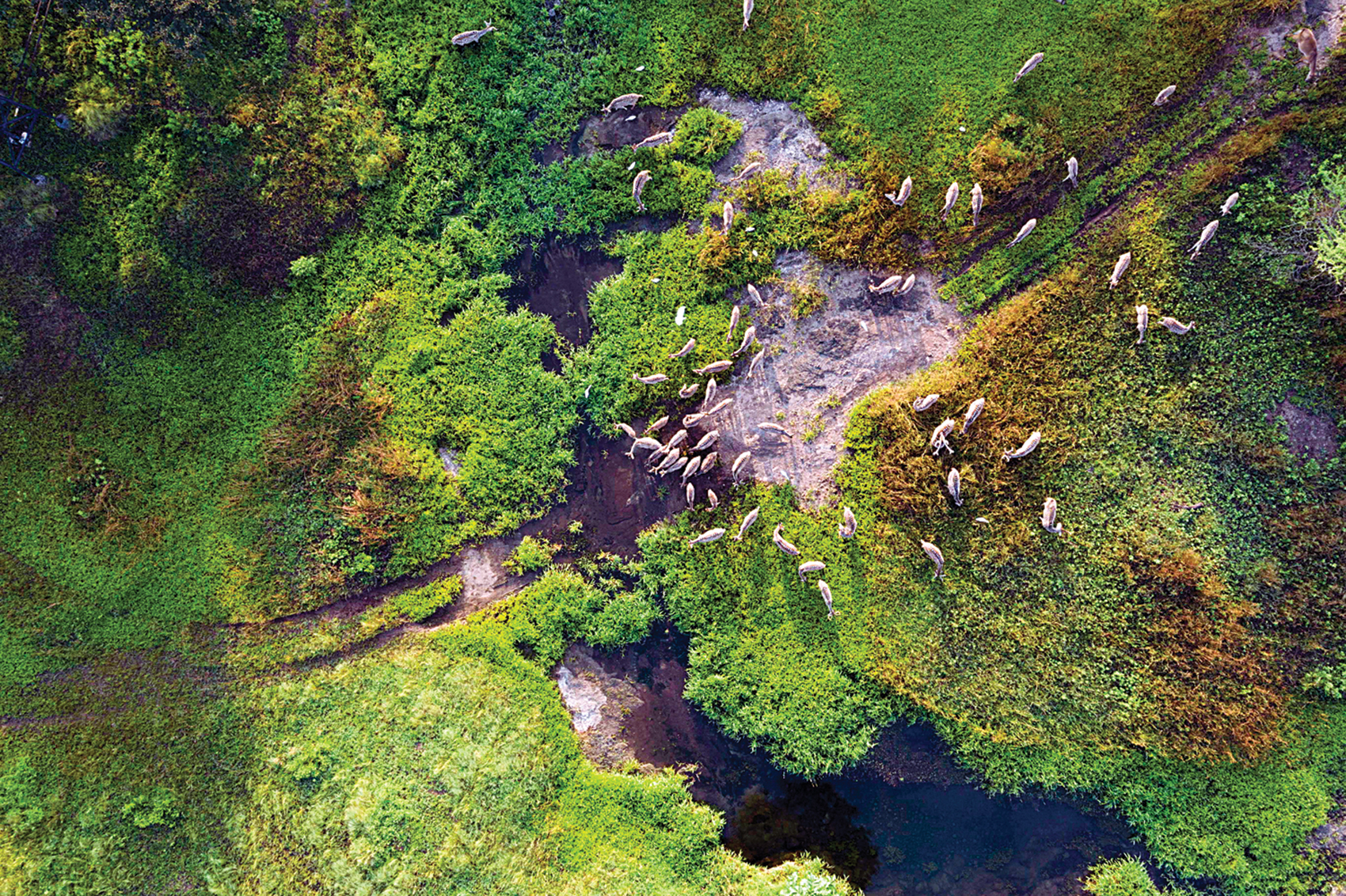 A chital herd feeds on fresh monsoon grasses that emerge when the rains arrive, turning the scorching, dry heat of summer into a verdant wonderland.

The monsoon arrives in mid-June and waters the land all the way to October. An earthy fragrance now wafts through the forest. The first showers awaken the soil, from which fresh vegetation springs, and turns the forest green. This is when all manner of life forms are able to sustain their new families. The air now reverberates to the sound of birds and insects, and at night, fireflies put up their spectacular displays. Streams and rivers eventually spring to life, and their gurgling draws lions, leopards, jackals, langur, and birds to the life-giving waters. 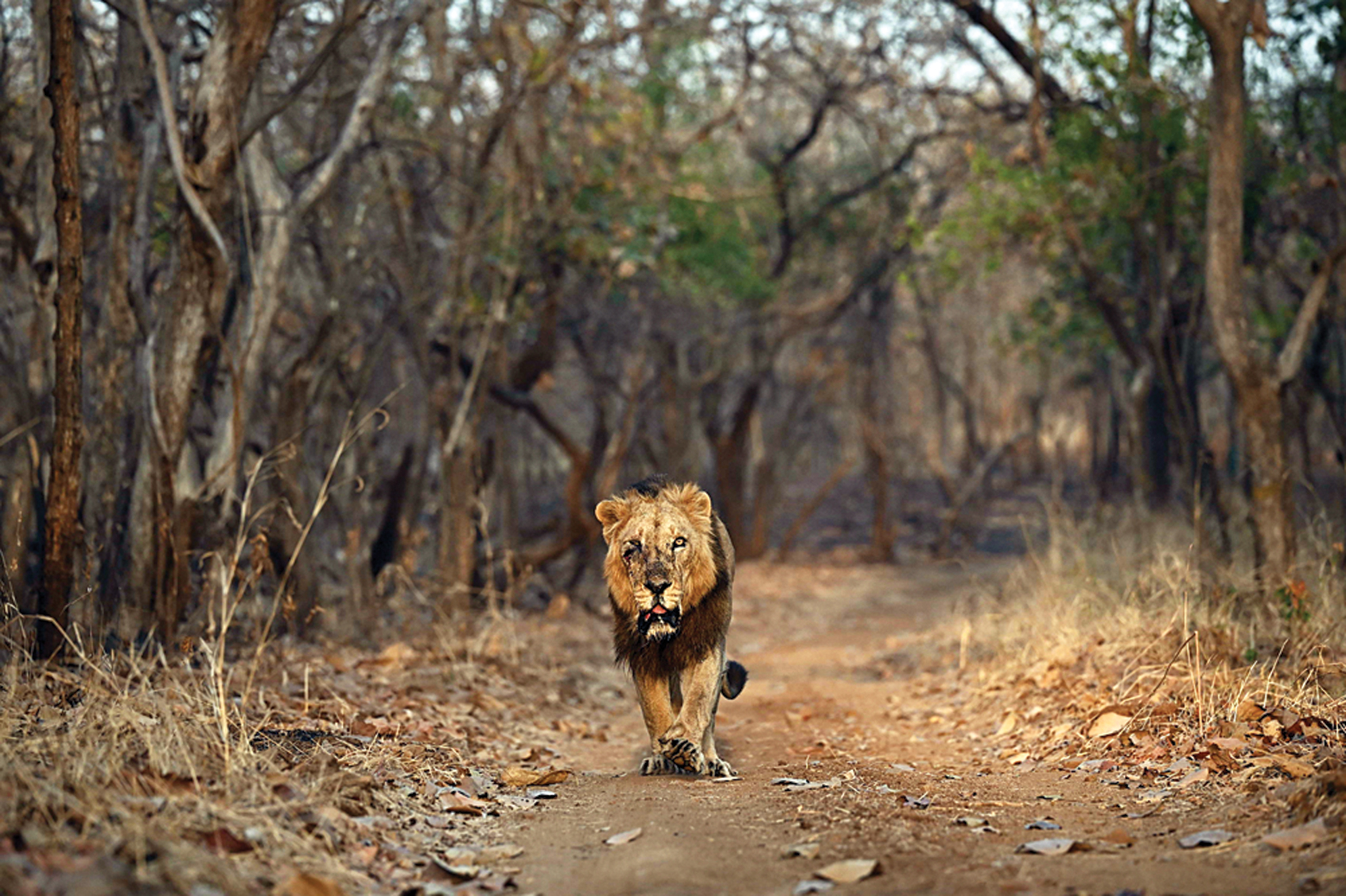 When the monsoon recedes, Gir’s green gables are slowly transformed, with mere patches of green remaining. The moist air is replaced by dry cold winds as they await the next season of plenty. Within larger seasonal cycles, smaller cycles create microhabitats to which plants have learned to adapt. Trees prepare for the dry season ahead, having shed their green hues to display vibrant reds, oranges and yellows. 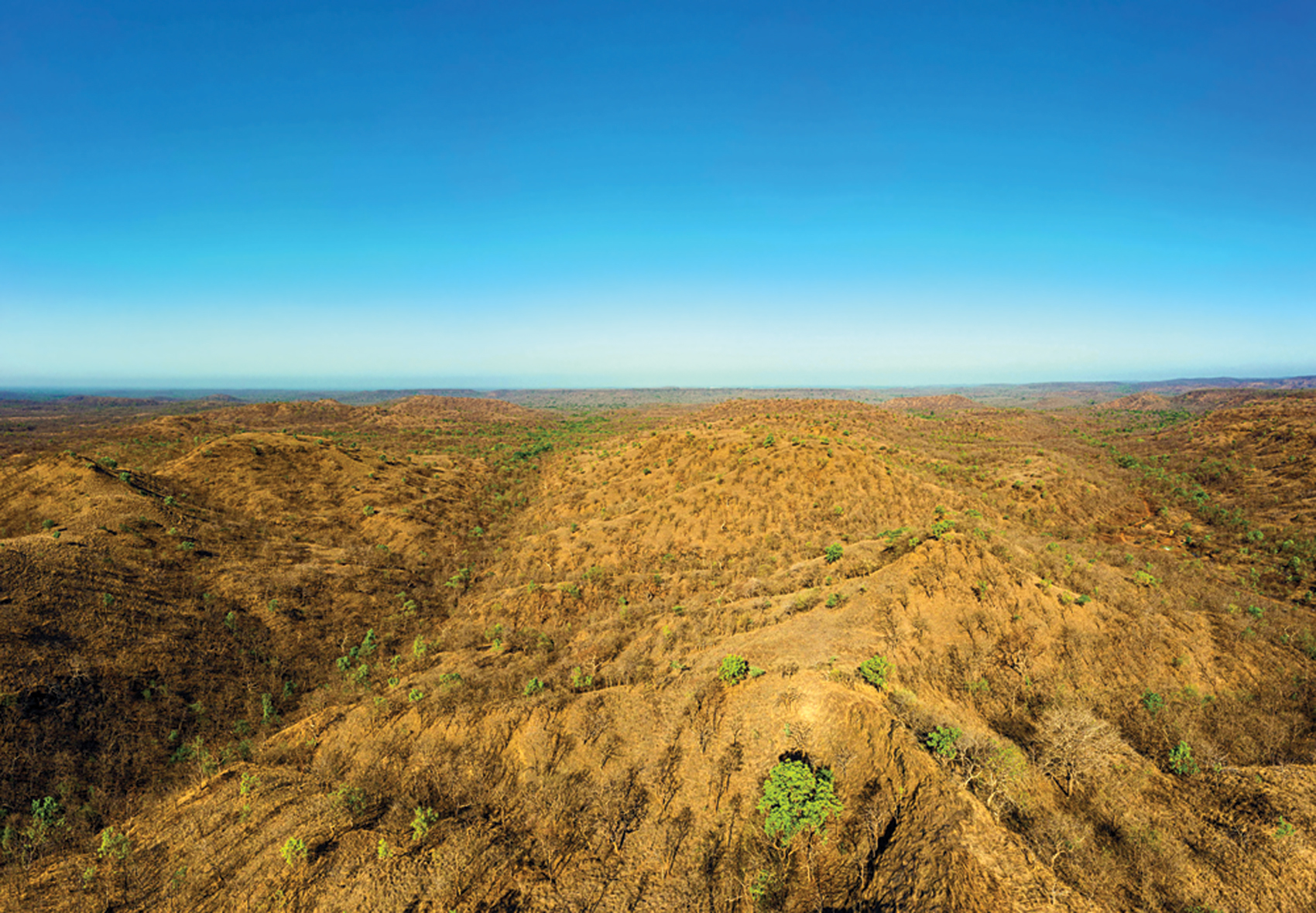 While most trees shed their canopies in summer, the flame of the forest trees Butea monosperma colour the landscape orange and crimson with their extravagant blooms that sustain a myriad pollinating lifeforms ranging from bees and butterflies to squirrels and monkeys.

Soon, the sky clears, the days grow short and a slow chill begins to set in. Mango trees flower, filling the surroundings with their fragrance. As temperatures drop, cold-blooded mugger crocodiles emerge from the burrows and can often be seen basking in the sunlight. Between November and February, winter migrants including Himalayan Griffons, Eurasian Griffons, Egyptian Vultures, Cinereous Vultures, together with a diversity of eagles, buzzards, rollers, shrikes, flycatchers, waterfowls, and ducks turn Gir into a birders’ paradise. 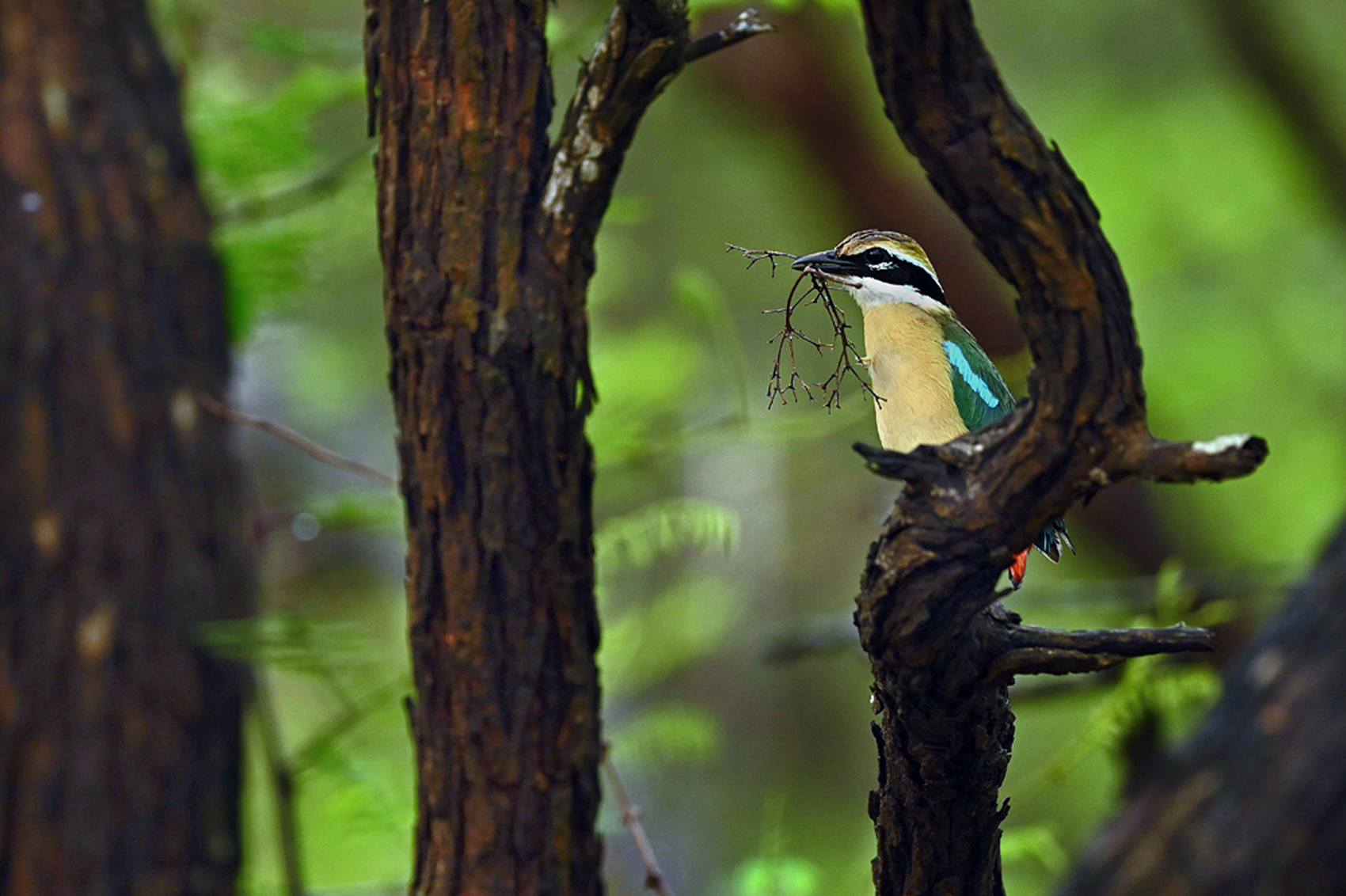 Also referred to as navrang for the nine colours of its vibrant plumage, Indian Pittas Pitta brachyuram sift through the forest floor for insects and other delectables that emerge during the monsoon.

Walking the many trails at Gir forest, termite mounds, locally called raafdo, stand cathedral-like, all naturally engineered using moist soil and saliva. These structures turn into thermoregulators for termites to maintain humidity, temperature and soil health. Interestingly, termite activity together with mound construction helps create nutrient-rich patches. It is known that termite mounds influence floral diversity. In this, the last bastion of Panthera leo persica, lion numbers have risen steadily and are now estimated to be not less than 674 individuals as per the last official estimation. The Asiatic lion evolved from its African counterpart, possibly migrating from Africa to the Arabian peninsula into southern Europe… and then India. Though Gir is not a savanna, it has proven to be a perfect habitat for the lion, with entire prides capable of disappearing into their sand-coloured landscape as if by magic. 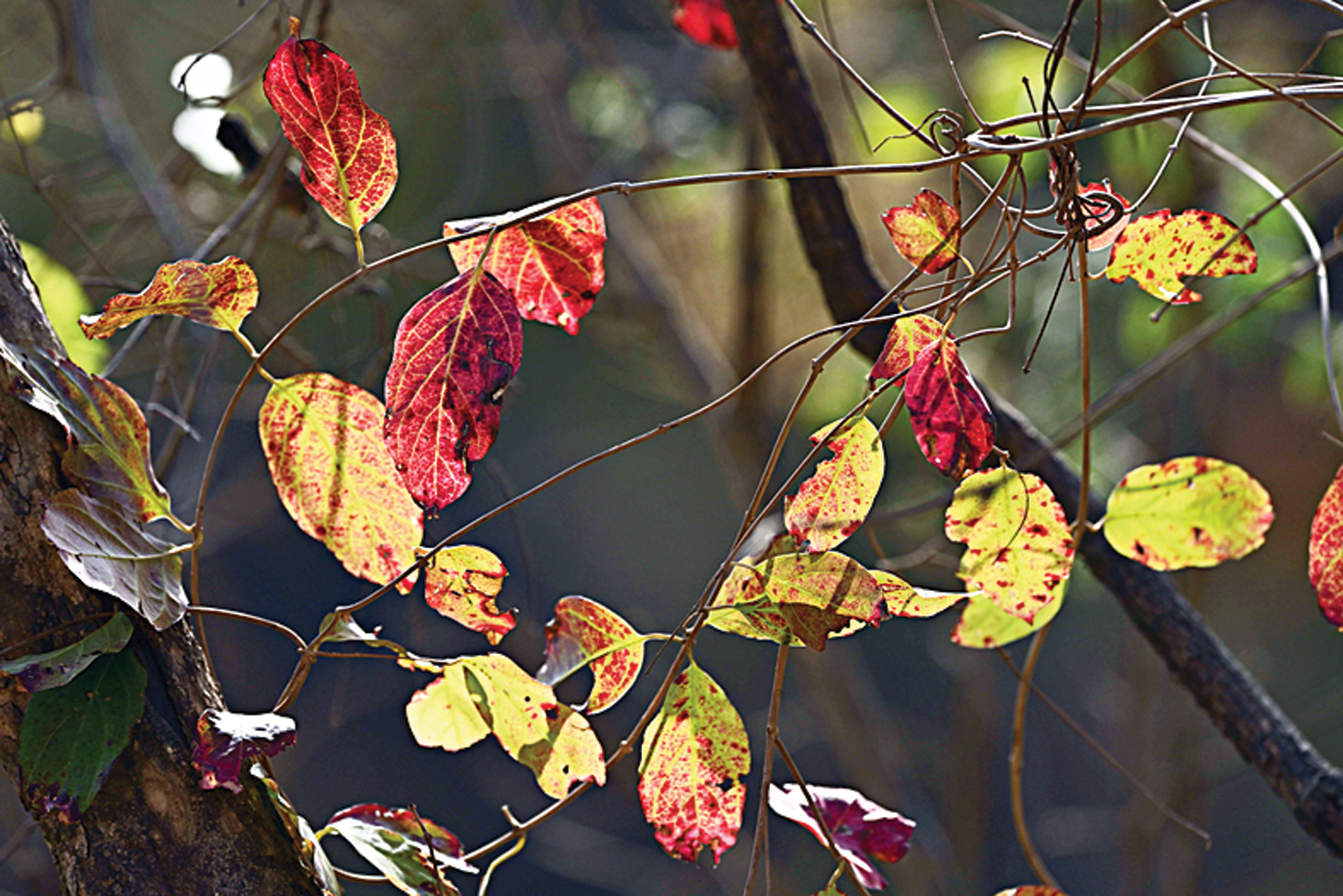 Winter has ended, another seasonal cycle laid to rest. Within larger seasonal cycles, smaller cycles create microhabitats to which plants have learned to adapt. This tree seems to be preparing for the dry season ahead, having shed its green hues to display vibrant reds, oranges and yellows.

Gir throws up unique ecological canvases as one season melds into another, making a visit to this natural haven a journey to remember.

Dr. Mohan Ram is an Indian Forest Service Officer (IFS) and is currently the DFO, Wildlife Division, Sasan-Gir, Gir National Park and Sanctuary. He has a keen passion for forest and wildlife conservation and is an alumnus of the Indian Agricultural Research Institute, New Delhi.