Trail of the Whistling Hunter

With cold fingers, I move the tent flap out of the way and peer outside. The landscape is still a blur of greyness and mist with loud plunks as the rain hits the mud. Eld’s deer in the distance are hunkered down together in the grassland; eyes squeezed shut, just waiting for the barrage of water to end. I feel like crawling back into my sleeping bag and shutting my eyes to the world too. It should be the end of the rainy season in Thailand, but we have had heavy rain for weeks. Have you ever gone camping in the rain? Wet tent, wet shoes, wet clothes, gloomy skies, and gloomy moods… we are starting to think our trip will be a failure. It is discouraging to constantly face challenges in the field, and this is magnified by never actually seeing the animal we are studying.

I have been studying dholes through graduate school and now work as a conservation biologist at the Minnesota Zoo. As a conservation biologist, I work to monitor and protect animal species around the planet. Dholes Cuon alpinus are also known as Asiatic wild dogs. They are reddish-brown in colour and weigh about 15 kg. (equivalent to a medium-sized domestic dog). Many guests at our zoo mistake our dholes on exhibit for red foxes. In some countries, dholes are directly killed by people who blame them for attacking their livestock. This is not a huge issue in Thailand. We have only received reports of a handful of chickens being taken by dholes. A greater threat is forests being cut down to expand agriculture, and people aggressively hunting sambar and snaring wild pigs – the dholes’ main food source.

Dholes are extremely difficult to study in Thailand because of their low population densities and elusive nature. The Southeast Asian carnivore is classified as endangered but we cannot develop effective conservation strategies for the species if we don’t know enough about them. Dhole encounters by park rangers in Thailand have created the perception that they may be overly abundant in some Protected Areas. This perception is one of the reasons there is no set conservation plan for dholes in Thailand. Therefore, it is an urgent need to increase the conservation profile of dholes, while conducting scientific research to advance knowledge on species biology and abundance.

I have seen wild dholes only a handful of times in the forest, and up until this year, my colleagues and I had only collected detailed information about one dhole pack. Instead of relying on sightings, we collect information using camera traps. They are operational night and day, seven days a week. A photo can tell us a lot about an elusive dhole. The time stamp tells us when the individual was active, the background in the photo tells us about their habitat, and we can gather health observations. Does the dhole look healthy with a shiny coat and strong body? Do they look unkempt, injured, with ribs showing that could indicate disease? And a photo with pups tells us that there is still active breeding in an area. We also photograph domestic dogs with our camera traps. The dogs use the same areas as dholes. If the dogs are sick, they could make the dholes sick.

We can gather even more information by fitting dholes with a GPS collar to track their every move. This data can help us estimate how many packs are present in the park. For example, population numbers may falsely seem high if people are seeing the same large pack over and over again. We can gain a more complete picture of the density of dhole packs, their home range sizes, and movements of the highly-secretive species by tracking dhole packs with satellite-enabled GPS collars.

Putting a collar on a wild animal, especially one that is endangered with fewer than 2,500 left in the wild, is a tremendous challenge. Just to get permission for the task we needed a permit to work in Thailand, a permit to conduct research in a wildlife sanctuary, and a permit to work with live animals. We needed funding, trained field staff, and an available veterinarian. Oh, and we needed to know where to find the dholes! All of this takes time. And all of this has to come together at the same time. It took me five years to get a GPS collar on one dhole and three more years until we could attempt it again. As it ended up, we were not successful in finding dholes during the rainy season last year. We returned again to Salakpra and Khao Ang Rue Nai Wildlife Sanctuaries in Thailand in February 2015 to finally catch two dholes and fit them with GPS collars. My work is in collaboration with colleagues from the Smithsonian Conservation Biology Institute.

On February 15, 2015, I was in the middle of hand-washing my clothes, but I stood up and wiped the sudsy soap off of my wrists and fingers. Our team has to fit in tasks like this, or even eating and sleeping, in between having to go and check our trap sites that were set up to catch dholes. We monitored trap transmitters every 30 minutes for each site. When any of the traps moved, the transmitter beeped faster. The soap bubbles were quickly wiped dry on my pants because the trap transmitter was beeping fast!

The laundry could wait. That is one of the nice things about camping… it is a great excuse to be dirty. We quickly piled into the truck to investigate. Everyone sat a little straighter and woke up a little more alert as we rounded the bend. We strained to see in the darkness what had triggered the traps. At first nothing was visible as we slowly approached the trap site. There was no movement. Then, suddenly, someone spotted a swishing tail. Another jackal? A little more squinting into the flashlight beam, and confirmation – it was a dhole! The veterinarian injected the dhole with drugs to anaesthetise it. After the drugs took effect, we were able to safely lift the dhole into the back of the truck. We had to move the animal and ourselves away from the area because it is not safe to work in the forest in the dark with wandering elephants nearby. After our vet stabilised the canid and we took body measurements, I fit a GPS collar on the female dhole and released her at the spot where she was tranquilised. 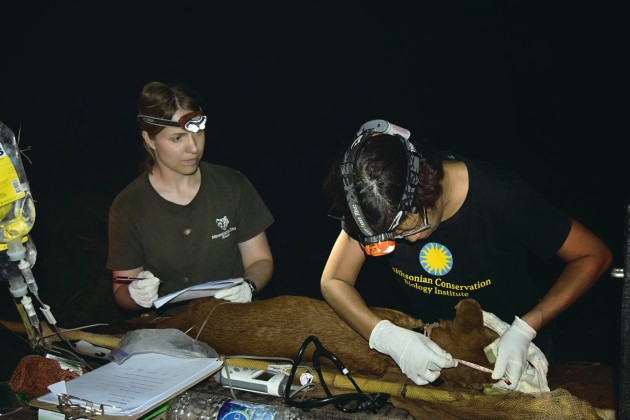 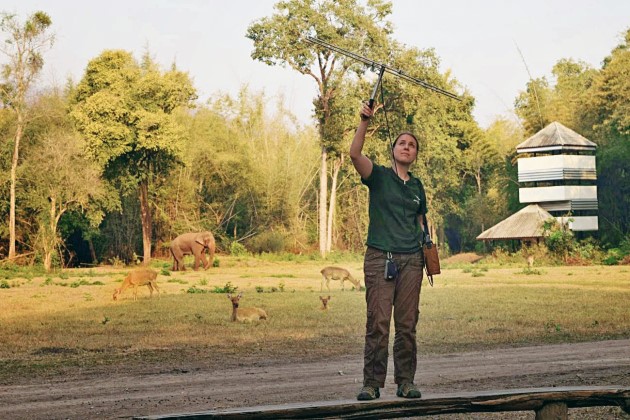 Dr. Jenks listening for signals from a GPS collar attached to a dhole in the Salakpra Wildlife Sanctuary. Elephants and Eld’s deer are visible in the background. Photo Courtesy: Dr. Nucharin Songsasen

The team named the dhole ‘Valentine’ because we first captured a photograph of her on a camera trap on Valentine’s Day. The collar will record Valentine’s location every four hours and send the data to my e-mail. I am excited to potentially have a nearly real-time map of the dhole’s movements for the next year. The data we collect will be used to learn how much space a dhole pack uses, where they travel, and how often they come into contact with potential threats like human settlements or roads.  As the data starts piling into my e-mail inbox, we will use our research findings and monitoring data to ensure a future for this little-known species.