It was early August 2015, and I boarded a flight to Nagpur to have a one-on-one with the Honorable Chief Minister (CM) of Maharashtra about the importance of having wildlife underpasses in strategic locations on the National Highway -7 (NH-7) that was on the verge of being upgraded from two to four lanes and in the process permanently severing the corridor between Pench and other tiger-bearing areas to the east such as Navegaon-Nagzira and Kanha. In my meeting with the CM, instead of getting into an emotional rant on how wildlife was being short chained by development, I chose to share the scientific findings from our long-term tiger monitoring exercise in the greater Pench landscape that included both Pench Tiger Reserves and corridors that connect Pench to other Protected Areas (PAs). Our data comprising camera-trapped tiger images unambiguously showed that even in its existing state, NH-7 was acting as a barrier for the movement of tigers and their prey. When I showed him the Minimum Convex Polygons plotted for every resident tiger of that landscape, he was taken aback to see that barring a couple of adult male tigers, no other individual was using both sides of NH-7. It took him less than a couple of seconds to decipher that disturbance created by vehicular traffic on the existing two-lane highway was restricting free movement of tigers, and within no time I had his word that he will personally ensure that adequate number and length of mitigation structures will be provided when four laning process starts. 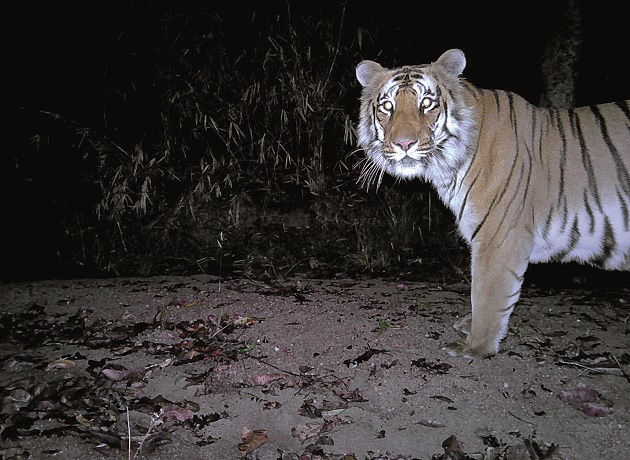 Camera traps are deployed to extract vital infrmation on tiger demograpohy and distribution.

This speaks volumes about the value of sound science in assisting decision makers. This is one of the most vital objectives of the WCT team, which is involved with systematic and intensive monitoring of forests outside the PAs of Central India. What is showcased on these pages is a microcosm of the camera trap images collected from the corridors and Territorial Forests of Madhya Pradesh (M.P.). The exercise was carried out by WCT’s field team in collaboration with the M.P. Forest Department. In the process, countless hours were spent walking arduous terrain and braving temperatures ranging from two to 45 0C to get a first-hand, granular understanding of the distribution of large carnivores, their prey, and other lesser-known, less visible species… all being impacted by human disturbances.

The camera trapping exercise yielded some fascinating results. We found Eurasian otters in the Balaghat Forest Division, from where they were unknown. It busted the notion that wolves and hyaenas had disappeared. 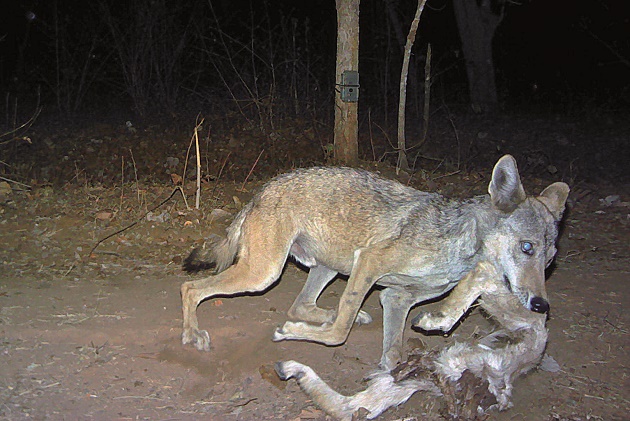 Indian wolves Canis lupus pallipes were encountered more frequently than indicated by anecdotal information. Their dependence on livestock and the associated myths lead to their persecution, and their dens are often destroyed across their range by pastoralists.

We were able to establish that while their numbers had fallen, they are widely, if only thinly, distributed across M.P. We also recorded tigers and leopards in what are called Multiple Use Areas, often cheek by jowl with dense human and livestock populations, with a lower degree of conflict than might have been expected. 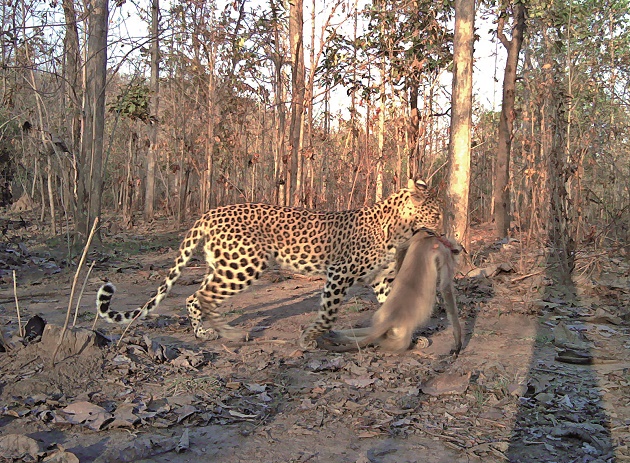 Leopards frequently predate upon the common langur (facing page, top) but are rarely captured on camera.

When we sit to analyse the images that are painstakingly collected from the field, we often say to ourselves: “People would travel across oceans for the briefest glimpse of these creatures.” In the days to come, one outcome of our biodiversity assessment could surely be to help communities set up homestays for the kind of experiential tourism that can provide livelihoods as well as help maintain tiger populations outside PAs.

However, apart from the rich biodiversity, our camera traps also revealed that all was not well. Innumerable instances emerged of human activities that were damaging corridors and Territorial Forest patches. We were taken aback to see just how much firewood was still being collected from forests because lands that used to supply firewood had been deforested for marginal farming, or by infrastructure projects designed to benefit urban India. We also consistently picked up images of gun-toting men from several human-dominated forest patches. 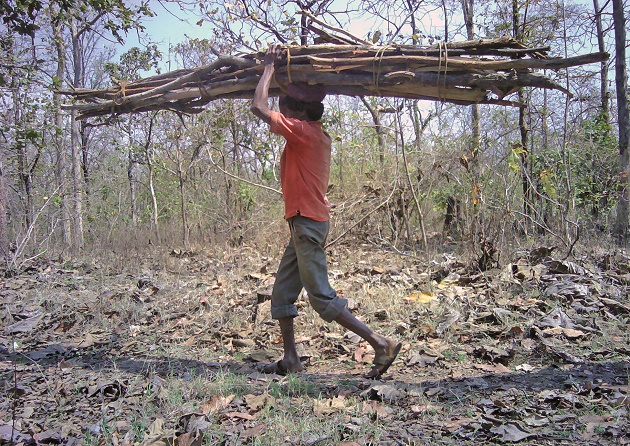 Firewood extraction was one of the most photo-captured human activities in Territorial Forests (above). Photos of people toting guns (below), obviously for hunting wild animals, though not as common, was more frequently captured than one can imagine, indicating heavy anthropogenic pressure on corridors. 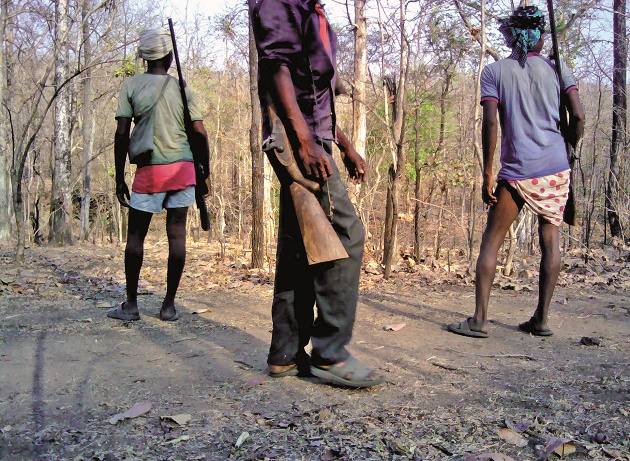 Our camera-trapping work also revealed a high degree of bush meat hunting via images of animals that had miraculously escaped the phalanx of wire snares laid out in poorly secured PAs. The picture of an injured adult hyaena is just one of the many indirect evidences of the hunting pressure. 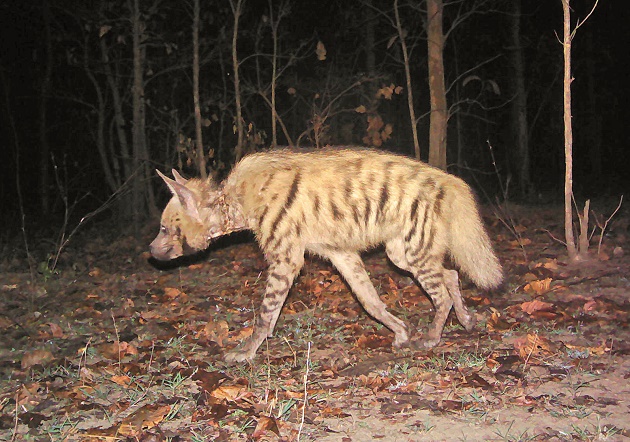 A significant observation from the camera trapping work across Reserve Forests is of wild animals that have either miraculously escaped from wire snares such as this injured adult striped hyaena Hyaena hyaena or animals roaming with snares stuck around their necks or waists.

WCT instantly shares details of such instances with forest officers so quick action can be taken. The Madhya Pradesh Forest Department does not have an easy job on hand. With dwindling biomass to rely on outside PAs, the antagonism between people and park management gets accentuated because inevitably crop and livestock depredation by wildlife occur. On top of this, human injuries and sometimes, even deaths take place.

Every such incident adds fuel to the fire of resentful communities whose quality of life is clearly falling as they increasingly deal with floods, droughts, crop failures for a variety of reasons, including the impact of an uncertain climate.  For local leaders looking to climb the political ladder, aggravating such situations is a quicker way to get noticed than to quietly help solve or quell the adverse impact of human-animal conflicts. 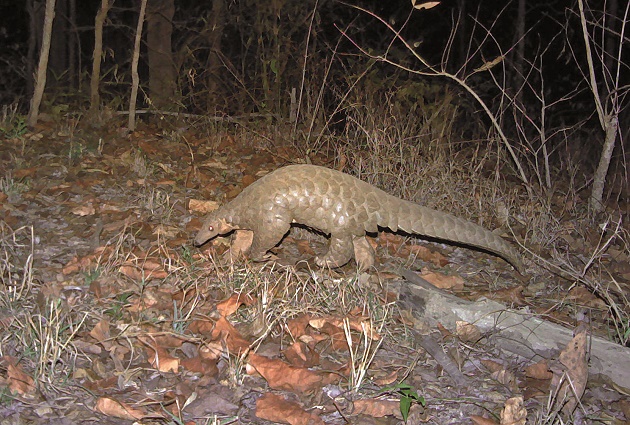 Seeing an Indian pangolin Manis crassicaudata is extremely challenging. In the past 30 years, the author has seen this nocturnal ant-eater only thrice! Currently, pangolins are probably the most illegally traded wild mammals on Earth.

There are no magic bullets. India is a very densely-populated country, and with every passing day, the need to match land use policies to the imperatives of biodiversity, climate change and livelihoods is becoming more acute. Towards this objective, one tiny slice of solution is to collate irrefutable, well-analysed data that can help community leaders, park managers and policy makers to harmonise their actions to the benefit of both people and parks. 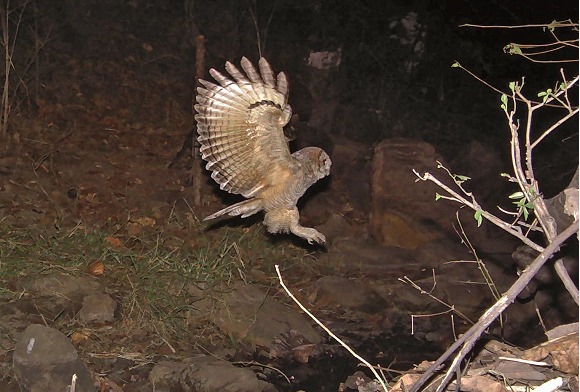 A Mottled Wood Owl, probably captured as it pounced on an unwary prey, under the cover of darkness.

When one talks about estimating wild animal densities or identifying individual animals from a population of a species that has body patterns unique to each individual (for example tiger, leopard, hyaena, snow leopard, clouded leopard, other striped or spotted small cats), the technique that comes to mind is camera trapping. Apart from being more reliable than other methods, its added advantage is that it can be implemented across vast landscapes. In fact, in the last All India Tiger Estimation exercise carried out by the National Tiger Conservation Authority (NTCA) in 2014, an astonishingly vast forest area of over 350,000 sq. km. spread across 18 states of India was surveyed.

Camera traps are nothing but cameras mounted on posts such as tree trunks or wooden poles approximately 3.5 – 4 m. on both sides of a potential animal trail, with an infrared beam (invisible to animals) set at a height of about 45 cm. Animals such as tigers, leopards and hyaenas repeatedly travel along certain trails, communicating with other individuals of their species through scent markings. Camera traps are placed on such routes to maximise their photo-capture. Camera trap points are selected based on the presence of signs such as scats, scrapes, tracks, claw markings and scent deposits. When an animal cuts the infrared beam, the circuitry triggers the camera and a picture is taken. A set of two cameras, one on each side of the trail, helps in identifying unique individuals as the pattern on both sides of the body varies. Date, time and location of each photographic capture are noted. Animals are identified from photographs by comparing stripe or spot patterns. Shapes, specific individual stripes and the positions of several such stripes on different individuals are compared to unambiguously identify them.

Camera-trapping exercises almost always provide extremely important information about the presence and ecological role of other lesser-known, elusive species such as pangolin, civet, wolf, fox, ratel, mouse deer, porcupine and hyaena. Additionally, vital information on disturbances caused by human activities such as movement of poachers, collection of firewood, and livestock grazing is also captured. The Forest Department with the help of this information has made several arrests.