Text and photographs by Shailendra Yashwant

I moved backward silently, step by step, placing myself out of sight of the behemoths. My retreat was prompted by the trumpeting distress call of a cow elephant. I had inadvertently disturbed two females grooming their kutti (Malayalam for ‘young one’). I was in search of wildlife experiences, but not at such close quarters with the largest land-living mammal on earth! The elephants might normally have been more alert, but this was mid-July, when the Muthanga range of the Wayanad Wildlife Sanctuary is normally closed to visitors on account of torrential rains.

These huge creatures can be amazingly quiet and if you are not alert to the sound of their flapping ears or vegetation-crunching teeth, you can wind up in hairy situations such as this. Fortunately, I had taken some basic precautions. I was walking into the wind and at the very first sign of danger I froze. Obscured by the vegetation, I watched as the females raised their trunks in the air, sniffing desperately, threat-perception instincts finely honed. Finally, unable to get a fix on me, they vanished into their jungle.

I was in Wayanad in search of the elusive monsoon. Situated at 650 m. above mean sea level, the 340 sq. km. sanctuary, notified in 1973, is part of a large, 11,000 sq. km. Project Elephant habitat in the Nilgiris-Eastern Ghats region that spreads over four states – Kerala, Tamil Nadu, Karnataka and Andhra Pradesh. An estimated 6,000 elephants inhabit the moist deciduous forests of this region. Wayanad is, in fact, known as the ‘Cherrapunji’ (the wettest place on earth) of the Western Ghats as it receives more than 2,500 mm. of rain in July alone. 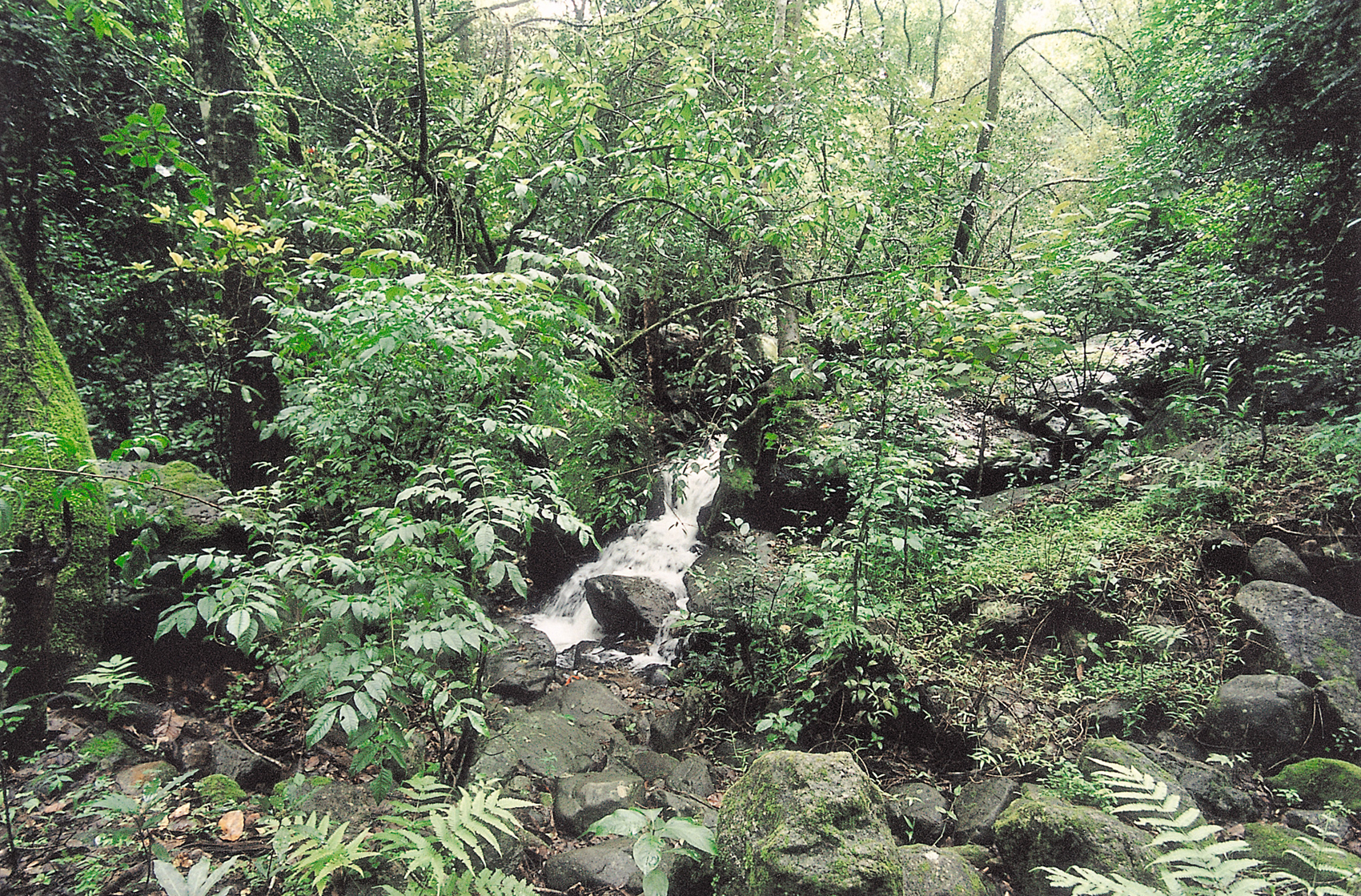 In a year of normal rainfall, this stream would have been waist-deep.

As it turned out, less than 270 mm. of rain was recorded this July, a major cause of worry for forest officials. As many as 17 elephants had already succumbed to diseases picked up at dirty waterholes since January 2002. Additionally, with the monsoon failing almost throughout the Nilgiris Biosphere Reserve, approximately 6,000 thirsty elephants were likely to come into increasing conflict with humans as both broke ranks to invade the others’ territory in search of water, particularly in the fringes of the forest.

By profession a photographer and not a wildlifer, I made sure that I was in the company of an expert before venturing into elephant country. With me was Suresh P.M., Assistant Wildlife Warden of the Muthanga range, a made-to-order forest officer if ever I saw one. No nonsense, very pro-active, enthusiastic, sensitive to and knowledgeable about the forest under his control, he considered every tree and animal his personal responsibility and he walked or drove around his range twice a day keeping tabs on water levels, fire hazards, records of sightings and anti-poaching posts.

Suresh jumped into the four-wheel drive jeep that I had hired at Kalpetta. As it turned out, a regular car would have done just as well because the roads were dry and hard as stone, not slushy as I had expected. Climate swings? Global warming? The effects of ecological malpractices? Whatever the reason, driving was easier than I had anticipated.

Of all the other ranges in the Nilgiri Biosphere Reserve, Wayanad (derived from Wyala nadu - ‘the land of paddy fields’) seems to have the largest share of problems. Elephant-human conflict, the result of numerous human habitations within the park, tops the list of problems, with habitat degradation, dry water bodies, a busy highway cutting through it and shortage of personnel following close behind. 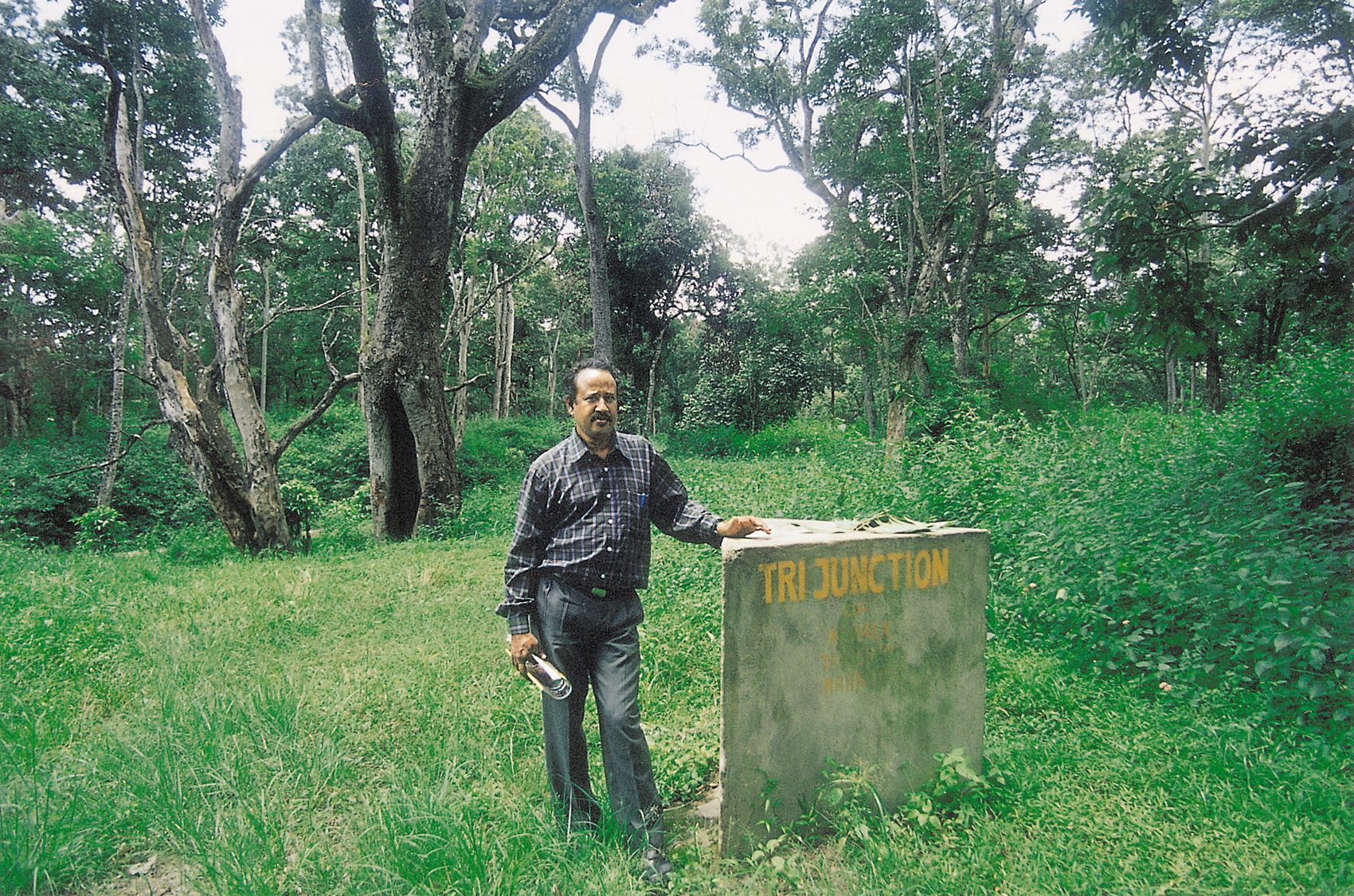 Suresh P.M., Assistant Wildlife Warden, is convinced that the ‘drought’ in Wayanad is due to the large-scale eucalyptus plantations in surrounding areas, which have sucked the groundwater dry.

Of the 89 settlements of 200 plus houses each, four are in the Muthanga range. Locals and wildlifers are working on a relocation programme aimed at putting an end to the human-animal conflicts that are increasing day by day, but progress seems to be at a snail’s pace. Though alternative lands have been identified and accepted by the community, hurdles such as crop compensation and assorted monetary matters are still pending because funds are not being made available as quickly as they should be for this vital initiative that would improve the lives of both humans and wildlife. In the interim, solar-powered electric fencing has been installed in the
most sensitive areas and this has helped reduce human-animal interaction. But the odd skirmish is inevitable in the coming months given the drought situation.

Mud and water are the elephant’s favourite substances. They love spending time around a river or waterhole, splashing and squelching around. The pachyderms require 100-200 litres of water everyday and are therefore always within a day’s walk from a reliable water source, which also serves as a bath to cool their massive bodies, which sport no sweat glands. Another evolutionary trick in their ‘cool’ strategy is to fan their large ears, which are equipped with an extensive network of blood vessels. Like a car radiator, this cools the elephants down by lowering the temperature of surface blood. Research suggests that the body temperature can be lowered by as much as 190C in this way. But nothing beats water in the hottest months.

As we drove around the park I could see that the Kabini river – Wayanad’s main water source – was at half strength. Most ponds, waterholes and marshlands had dwindled to muddy pools. Suresh and his staff were seriously concerned. Interestingly, they did not blame the erratic monsoon alone for the sorry state of affairs, as annual fluctuations in rainfall are also part of the natural cycle, over which we are powerless. Instead, they pointed to human interference in the natural cycle. Suresh talked with regret about massive (and ill-advised) eucalyptus plantations that had sprung up around the sanctuary. 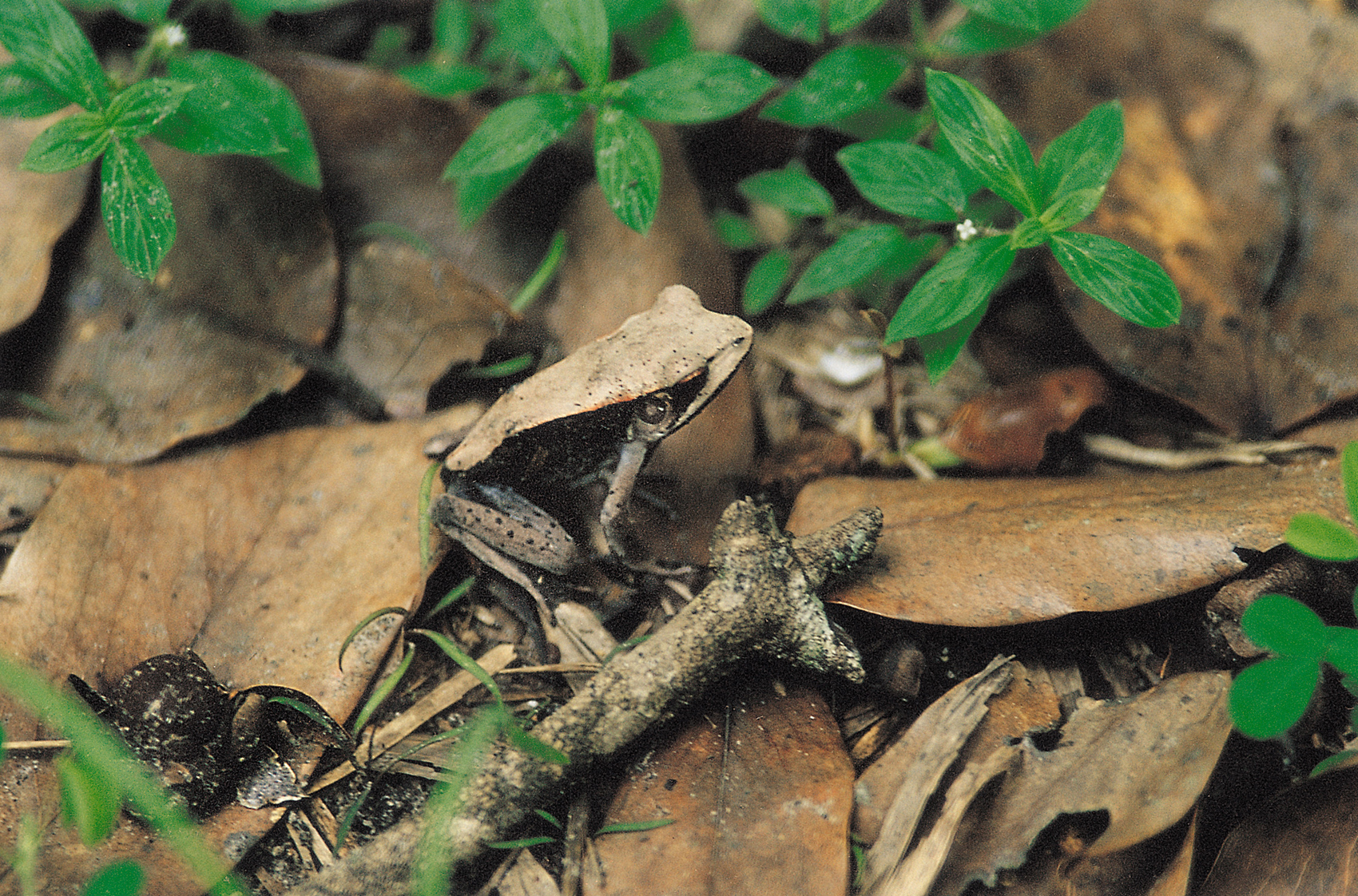 The relative shortage of water could affect species such as this bicoloured frog.

I saw that over 800 ha. of the buffer zone was surrounded by these tall, water-wasting exotics. Planted exclusively to supply the Grasim rayon mill in Mavoor, Kerala with a cheap and abundant supply of wood for conversion to pulp, this was a colossal folly, for which the forest and its inhabitants are now paying a heavy price. Twenty years ago, an exceedingly controversial Memorandum of Understanding was drawn up between the Kerala government and Grasim to set up a rayon factory in Mavoor near Calicut, with a promise of unending supplies of bamboo and wood pulp at the ridiculous price of Rs. 200 per tonne. It takes no great intelligence to know that with such deals, the company concerned will rip up huge chunks of forests without a care for any consequences other than their profits. Huge chunks of forests were chopped down and planted
with species like eucalyptus, which in turn played havoc with the ecosystem, drawing heavily on groundwater and sowing the seeds for eventual drought-like situations. Two years ago, the factory was shut down following a long struggle by environmentalists, not because of the damage it was causing to Kerala’s forests, but for the damage the factory pollution had caused to the Mavoor river and its people. But the forests are now stuck with this legacy to foolishness.

Lest Sanctuary readers begin to imagine that I have it in for large corporations, I must add that what Suresh showed me next was yet another ‘conspiracy’ to destroy the ancient ecosystems that had helped countless creatures weather countless crises through the ages – banana plantations. These innocuous fruits, drenched with the most vicious pesticides known to science, have virtually taken over the paddy fields that once surrounded the Wayanad Sanctuary. Unlike paddy, which was only dependent on the monsoon, the industrial cultivation of bananas involves using prodigious quantities of groundwater. This is then mixed with a lethal cocktail of fertilisers and pesticides and let loose upon innocent species that have little or no resistance to the poisons. 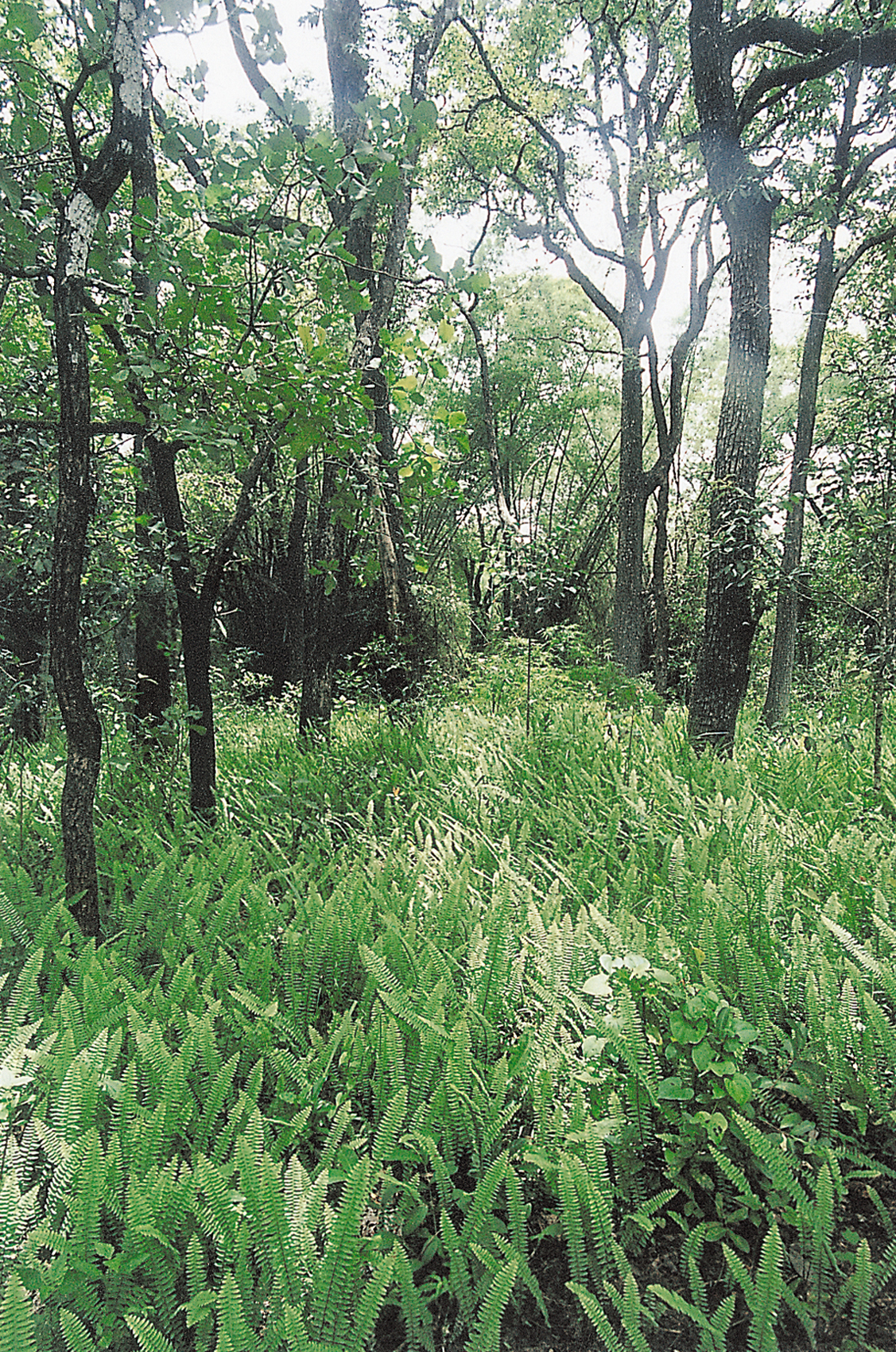 Human-elephant conflict is aggravated when forests are degraded or destroyed.

None of this, of course, makes the slightest difference to the three elephants I had seen that day. Programmed to trust in nature’s ability to provide for them, they continue to follow old migratory routes and search for trusted sources of food. No one has checked their endocrine systems to establish the impact of organochlorines, or studied sperm counts to find out if the breeding success could be affected by polluting factories.

In the past few months, we have seen how economists and politicians have blamed the drought that ravaged India on the “failure of the monsoon”. They forget that periodic dry spells have been a part of nature’s cycle for thousands of years and creatures have adapted to such circumstances. This, in fact, is one of the key elements nature uses to ensure the “survival of the fittest”. 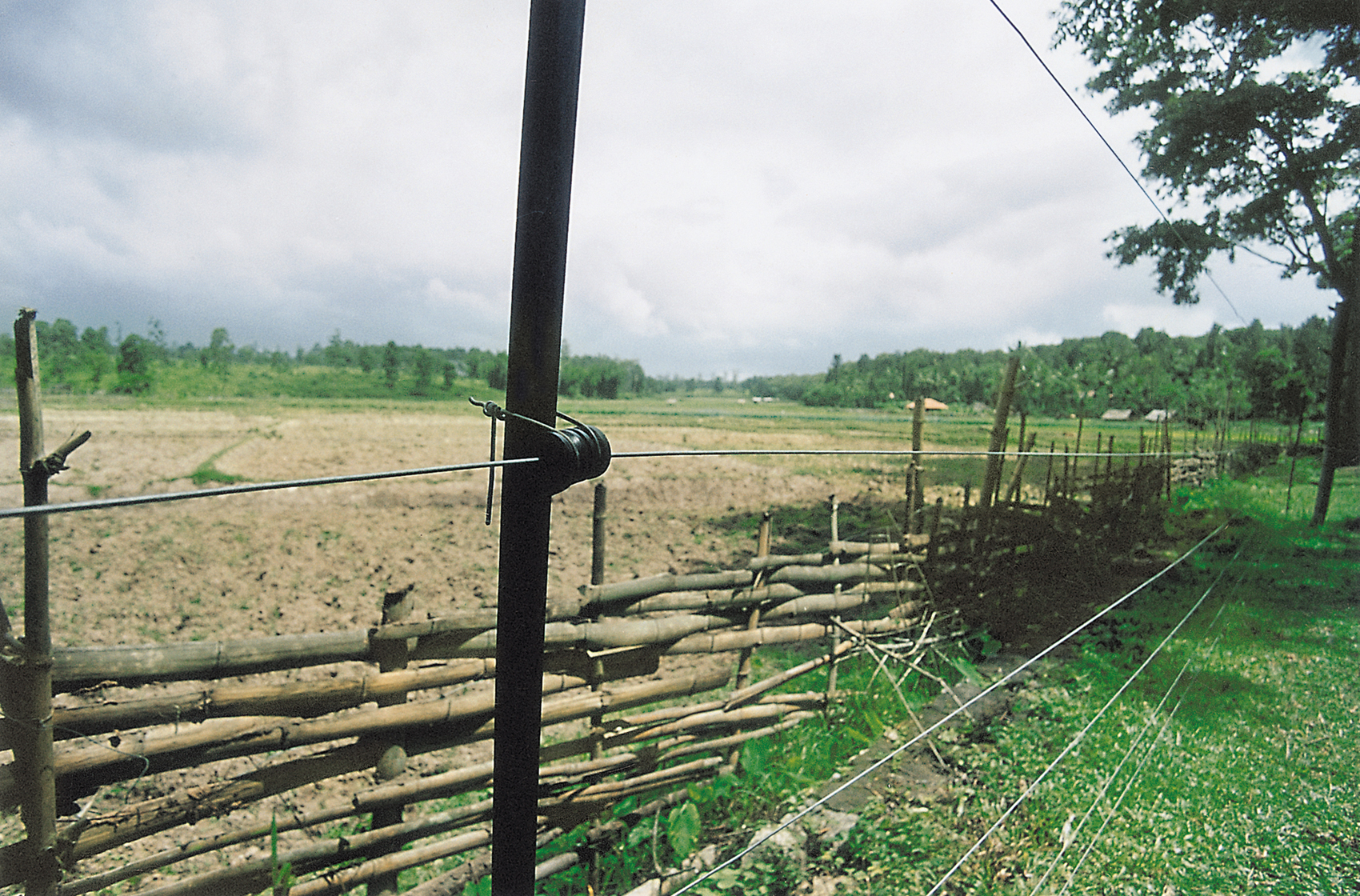 The Wayanad forest sponges the Indian monsoon, recharges aquifers, feeds rivers, protects soils and supplies robust food seeds that future and present generations need for their survival. Such biodiversity-rich forests are insurance policies against droughts and famines. Instead of recognising this role, are we going to sit idly by while the less intelligent and more greedy among us suck our water sources and our future dry? There is already talk of bringing water via tankers to fill the waterholes in the forest. I am sure that the elephants must think that we, the human race, are missing the point.