Wilderness is also the Wayside

Lockdown summer. A small Indian ash tree Lannea coromandelica leans over my apartment compound. The last berries hang from its branches. Its entire crown is visible from my balcony cubicle, where I sit often nowadays.

Since the tree started fruiting a few weeks ago, a koel pair has moved in. Around late morning, the female sits on a branch and shrieks. The male then comes flying, plucks berries and feeds her. The berries are becoming fewer now. And the ash can then quickly escalate into a quarrel-scape. Crow sits on Koel’s spot. Koel chases Crow, Crow chases Koel. Mynah chases Squirrel, who chases Bulbul. Squirrel often runs onto the compound wall when harassed, turns back and squeals expletives at the birds. A racket breaks out several times a day. A garden lizard, which climbs the tree to get some sun, has to break a run and scamper down the trunk each time the commotion begins. I have seen a Shikra hide in the neem nearby and launch two unsuccessful assaults at the reptile as well. A passion vine has begun to rappel up one ash bough, its leaves reaching out from the barbed wire railing. Files of carpenter ants march to the overripe fruits on the branches and on the ground. When the scene is quiet, on some afternoons, a Golden Oriole covertly drops by. 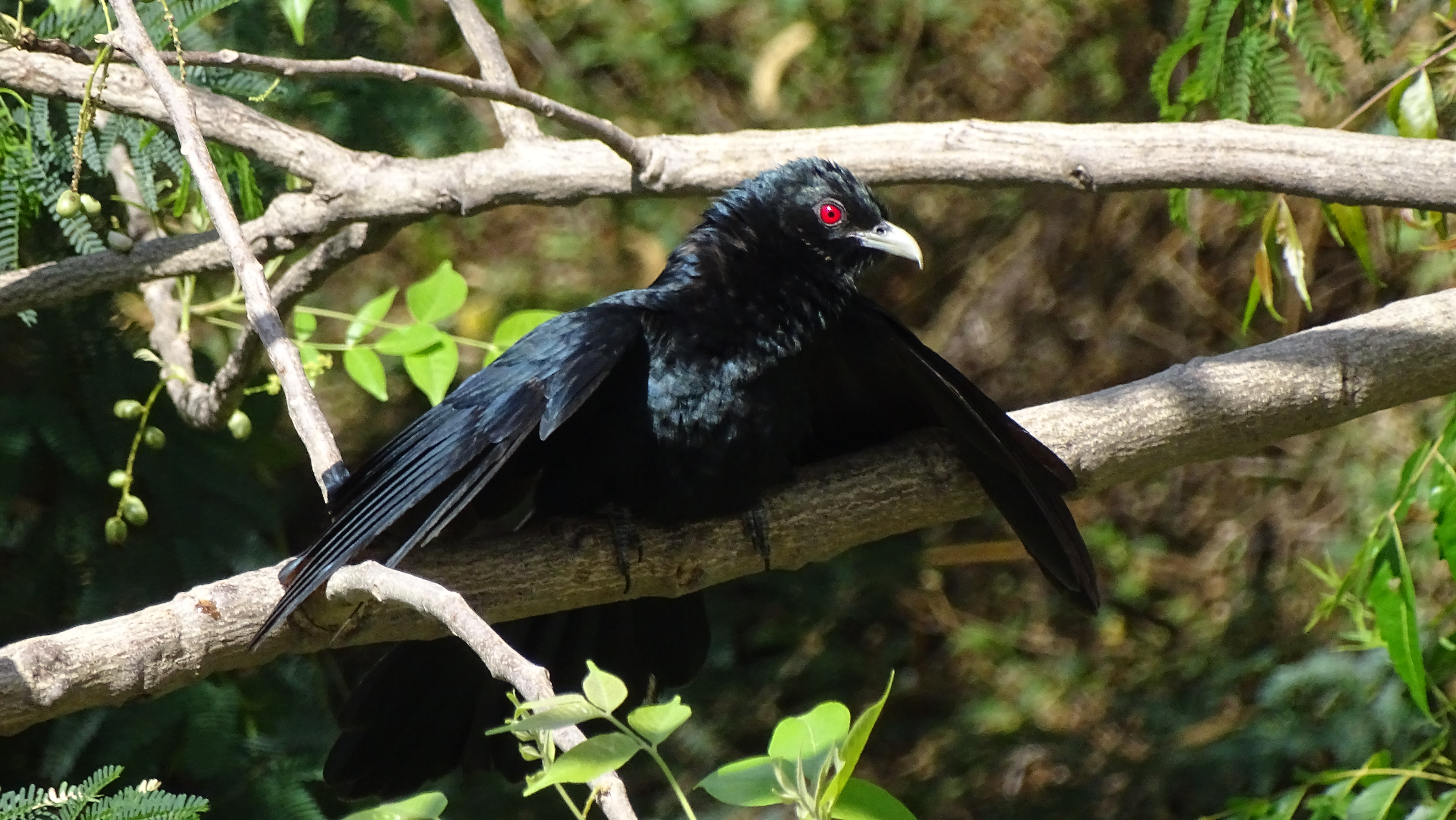 A male koel perches on the bough of an ash tree.

Ash grows wildly on the waysides, stands at every street corner. Like numerous other street-common plants, it hosts a unique community of species and stages its own ecological drama.

Another urban commoner is the pink morning glory Ipomoea carnea, which grows densely around water tanks, drains and ponds. It vegetates the water-land, water-concrete edges. Tortoise-shell beetles and blister beetles are fond of its leaves. Blue-banded bees, honey bees and hoverflies throng to its bell-shaped flowers, which ring faintly with insect wings. Senegal dartlets, ditch jewel dragonflies and many species of jumping spiders lurk around the petals, waiting to nab nectar-drinkers. 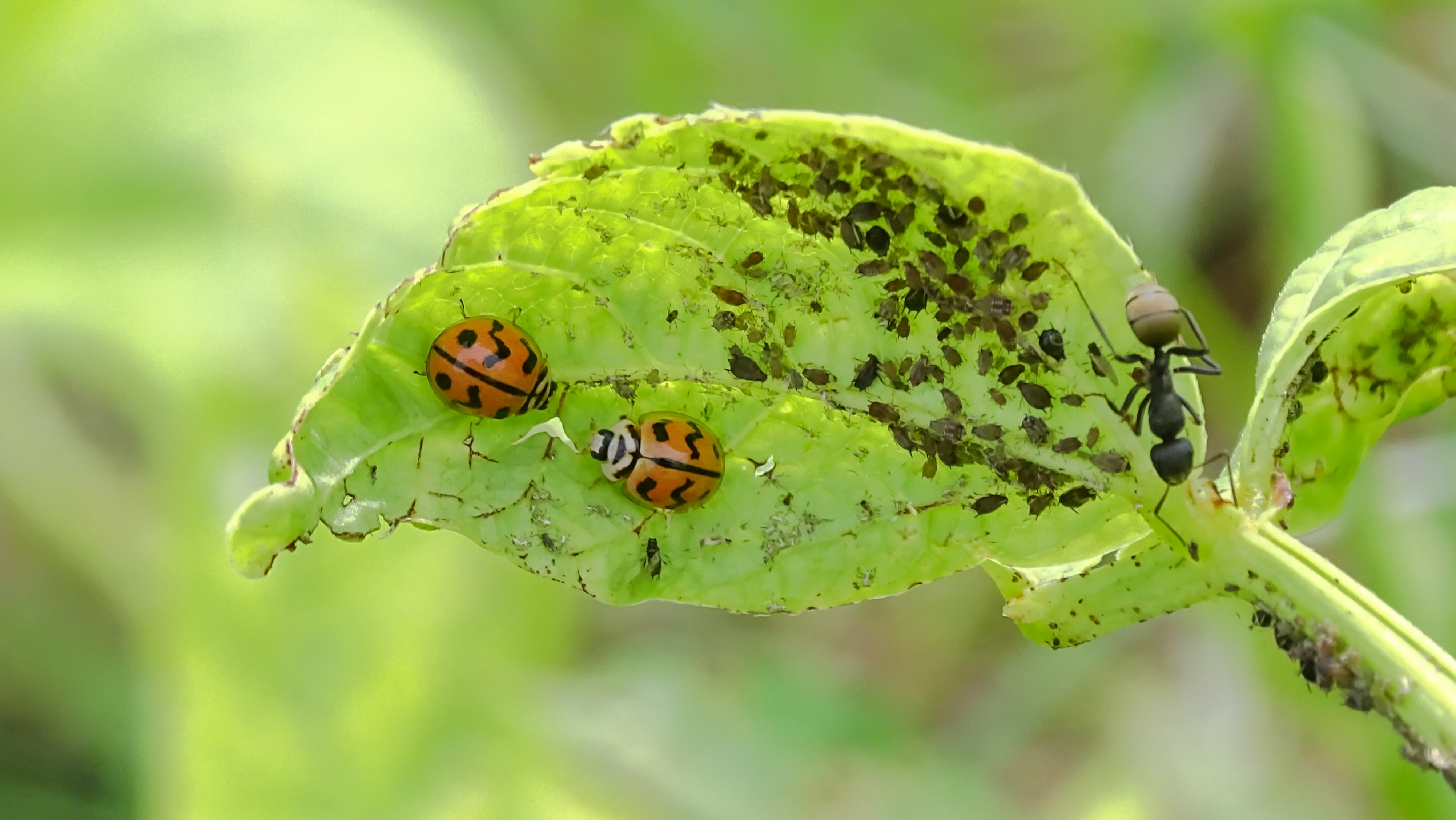 Every plant, like the Azuki bean, can create its own little distinct habitat.

The milkweed Calotrops gigantea community thrives on any derelict land, rising from rubble heaps. It consists of painted grasshoppers, milkweed bugs, plain tiger butterfly larvae, oleander aphids, froghoppers and their frothy spawn – all adapted to live off its poisonous latex. They sequester it and make themselves unpalatable to predators. Ants and carpenter bees come to its mauve flowers.

In a school I taught in several years ago, a young Indian beech tree Milletia pinnata once stood in the way of the cemented sitting area being constructed. Some students and teachers protested against it being cut down, and the concrete was then laid around it, leaving it a circle of Earth. As the tree grew, it began to cleave open the concrete, stirring discussions on its removal again. I took children as often as possible to the beech and co-taught my biology and ecology lessons with the tree. On this occasion and on various others later, I would learn that taking young children to a place and creating experiences for them is a great protection one can give the place. And that the deep conviction to stand up for a piece of wilderness – a tree, a park, a bird sanctuary – to fight for its preservation, often stems from the love of the place and childhood memories attached to it. 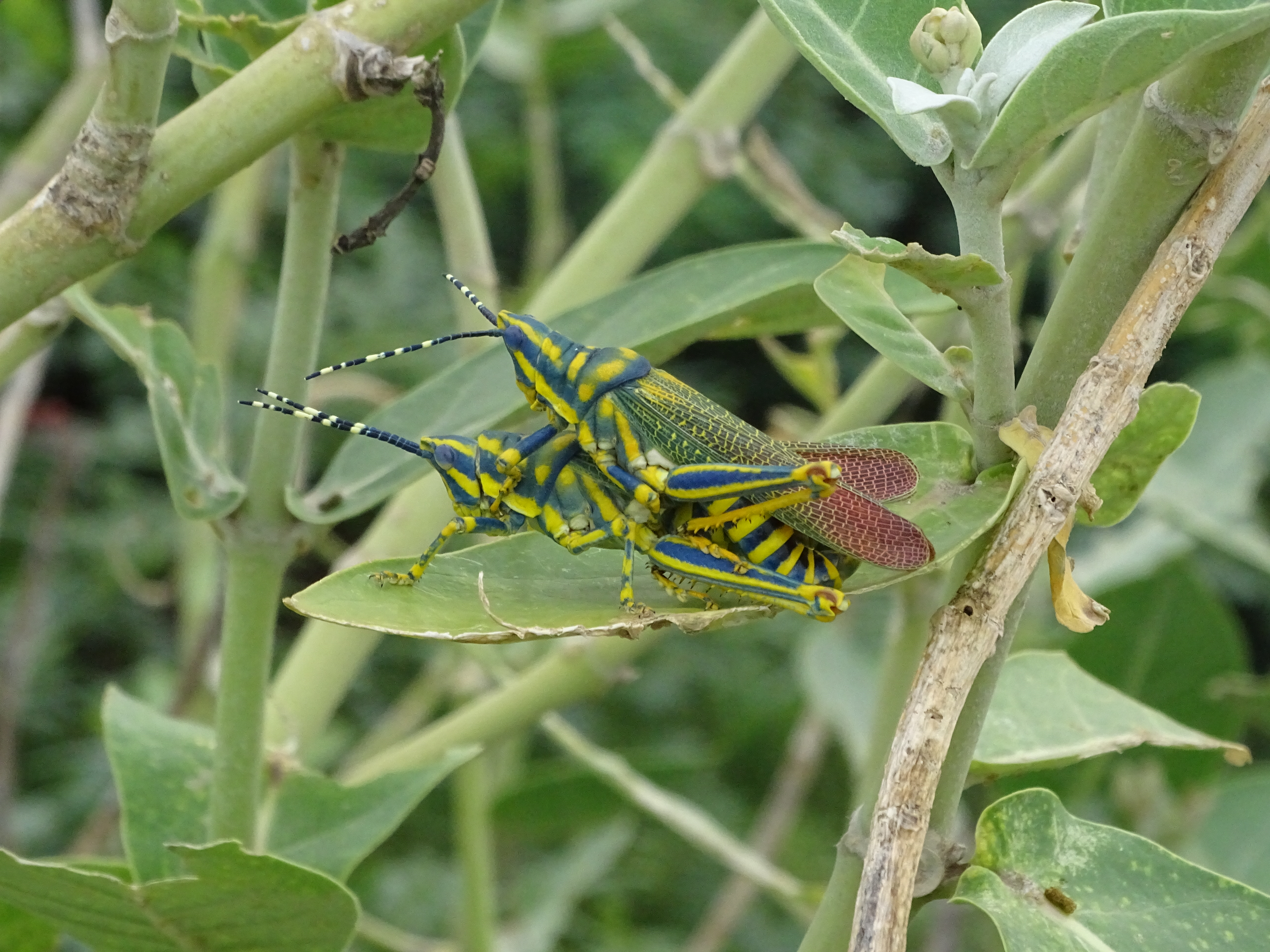 The author spots a pair of mating painted grasshoppers on a milkweed plant.

The beech, as it grew, became a world of its own. It hosted the larvae of sunbeam butterflies, banded awls, ceruleans, sawflies, death-head moths, plain grey hawkmoths, handmaiden moths, and several more. Stinkbugs laid their circular stacks of eggs on it. Paper wasps, potter wasps and parasitoid wasps built their nests on leaf-undersides, or came here often due to the abundance of caterpillars. Many species of lynx spiders, jumping spiders, and huntsmen haunted the foliage, hunted prey and made their egg-sacs. Numerous bees and flies came to its pink flower clusters in the summer. Bark beckos and bronzeback tree snakes would be spotted on the trunk and branches. Children would buzz around the tree at every break to watch what went on and keep track of the life stages of various creatures. Did the sunbeam eggs hatch yet? Has the awl emerged from its pupa? Where did the death-head moth’s caterpillar go missing? The tree soon became too important and beloved a teacher for the school to lose. 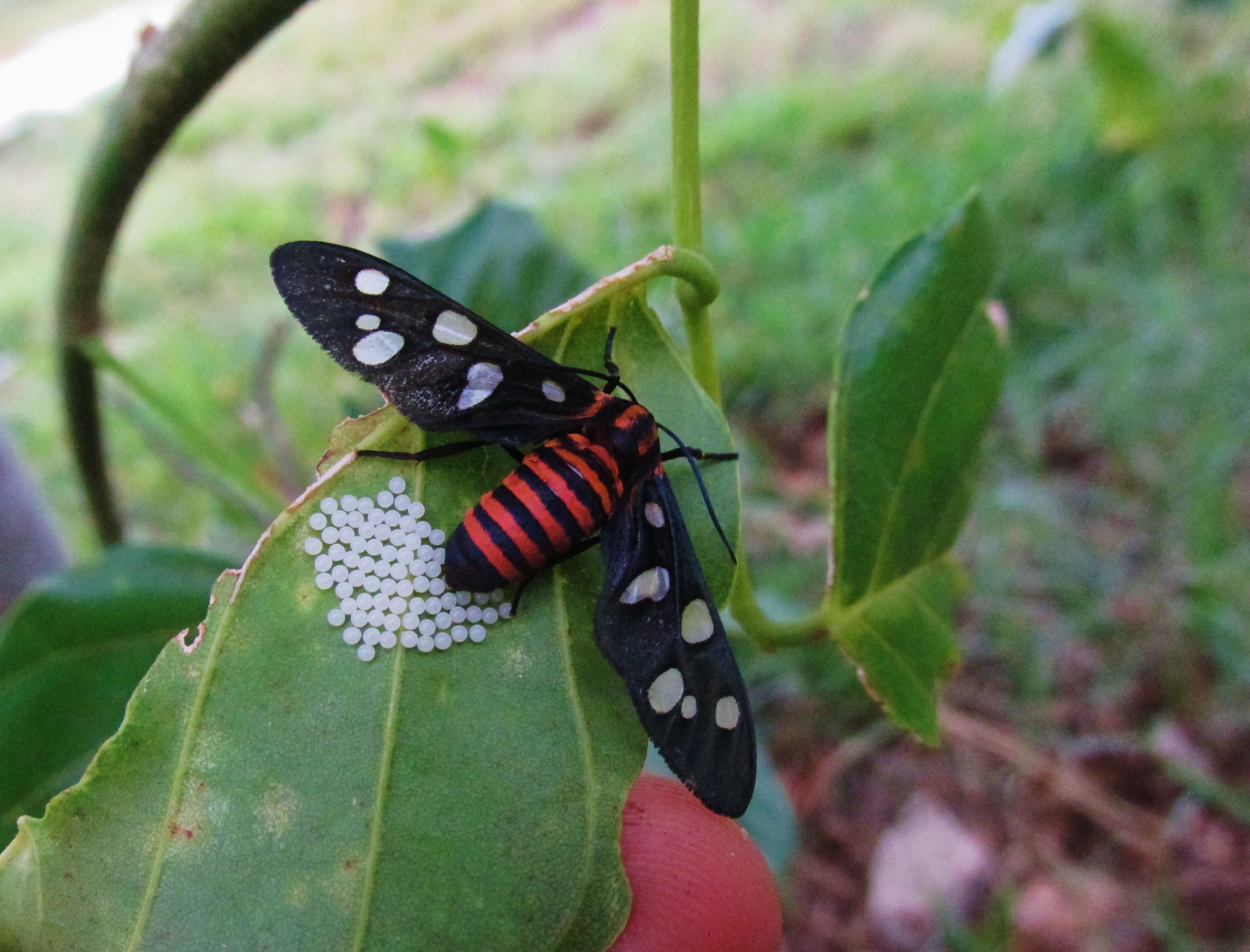 A handmaiden moth lays its eggs on an Indian beech tree. 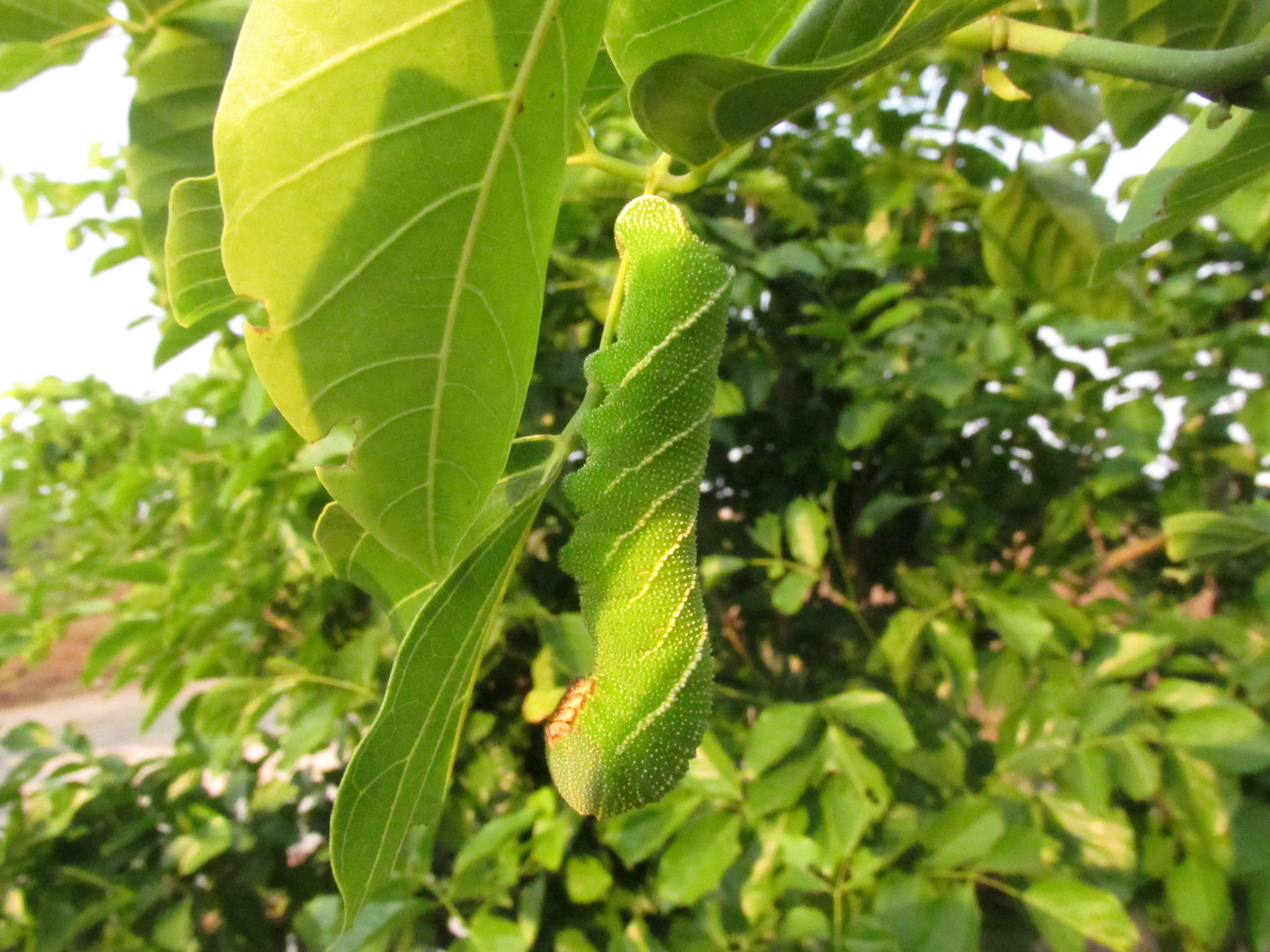 A death-head moth caterpillar makes its way up the leaf of a beech tree.

The ash, milkweed, morning glory and the beech are each distinct creature-confluences. They are where we can rewild our minds in the most urban of spaces. Their mini-menageries hold for us the scope to reweave threads of kinship with the natural world. Wilderness is also the wayside.

What are the common plants found around you? What living community does each host? What ecological drama goes on on them?