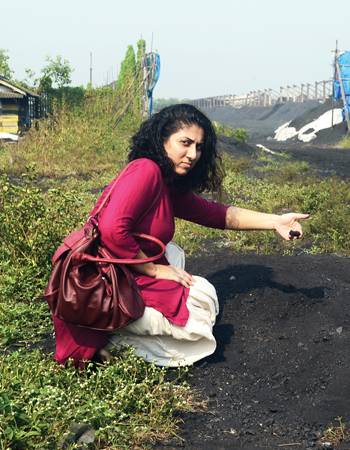 Anahita Mukherji And The Times Of India

Anahita Mukherji And The Times Of India With 10 years of reporting on public interest issues under her belt, Times of India’s Anahita Mukherji expertly marries tenacity to activism, and activism to writing. A graduate of the School of Oriental and African Studies in London, Mukherji has carved a niche for herself as an exceptional environmental reporter. One who is unafraid of invoking the ire of the powerful interest groups that she methodically exposes.

For the past year, Mukherji has doggedly followed the devastating impacts of 1,50,000 metric tonnes of coal lying in the open on Mumbai’s Eastern seafront. Not only has she documented the grave health hazards to those that live and work around these ‘coal mountains’, she has also consistently followed up on a High Court petition filed by activists seeking to prevent the Maharashtra Pollution Control Board from giving its “consent to operate” to the Mumbai Port Trust to handle coal, and revealed the manner in which the pollution board has neglected its duties.

After TOI’s sustained coverage of the issue, the Mumbai Port Trust released a public notice stating that it would stop handling coal by the third week of September and clean the entire area of coal by October 30. However, under duress from vested interests the port trust wrote to the Pollution Control Board seeking a fresh consent order. Mukherji went on to slam the board for, once again, agreeing to allow the Port Trust to handle coal. While the issue continues to burn, Mukherji critiques the government’s apathy and vows to keep writing till the coal is moved out of Mumbai once and for all.

For her incorruptible values and extraordinary perseverance to cover a neglected but crucial story, Anahita Mukherji and Times of India have proved to be a fighting force for Mumbai’s ecological health.