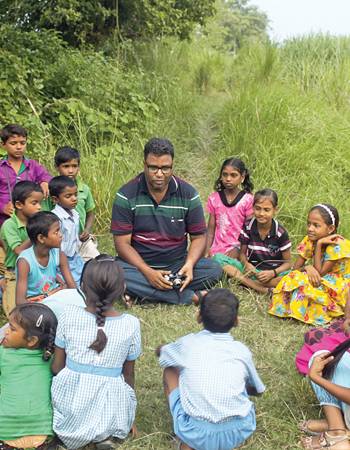 Anurag Kumar In early spring, the sugarcane in the fields on the edge of the Dudhwa Tiger Reserve stand a little less than two metres high. Near impenetrable, the sweet stalks dwarf the dozens of children who stream from Bansinagar village to a small clearing in these fields every evening. Here, the children will pull rugs and books out of a small building and settle down under the generous canopy of an aged peepal tree, or perhaps collect a large jute sack and head out into the buffer forests to collect litter left by ignorant tourists.

Eight years ago, Lucknow-based wildlife protector Anurag Kumar set up camp in this little clearing, which served as a base for his tryst with destiny. In the evenings, when he would return to his base, children from the neighbouring village would flock to him, asking to see pictures of wildlife. As his bond with these children grew, Kumar found himself compelled to channel their curiosity towards conservation, and so he conceptualised a free nature education school for rural children under the name of Vision Dudhwa.

In the half decade since Kumar started his school, not only has he constructed a small two-room centre, built a library of wildlife books and movies, hired a teacher and a caretaker, but his unorthodox, hands-on approach, has also ensured that the 35-odd children voluntarily land up for ‘nature school’ every evening after their government school hours. Their ‘syllabus’ comprises everything from moral studies and birdwatching, to wildlife rescue and litter collection in the buffer of the reserve. Special occasions are celebrated with great fervour – and the entire school gathers for meals and performances. The students are largely children of landless farmers, and through the school, Kumar regularly supplies them with essentials like warm clothes, stationary and the occasional nutritious treat.

How does he fund this? Kumar, who grew up in Lakhimpur Kheri where he nurtured his love for nature, spends almost 30 per cent of his salary from his job with the Uttar Pradesh Power Corporation Limited on running the school. What shortages arise are met by wildlife supporters who follow his work through a Facebook page.

As testament to his teaching methods, many of the students who have outgrown the school, regularly return to mentor their juniors and help the staff. Kumar has now started a similar project in a Tharu village on the Indo-Nepal border. By nurturing the young minds that live closest to our wildernesses, Anurag Kumar has triggered positive change in a ‘ripple-effect’ that flows from children to parents to the Forest Department.