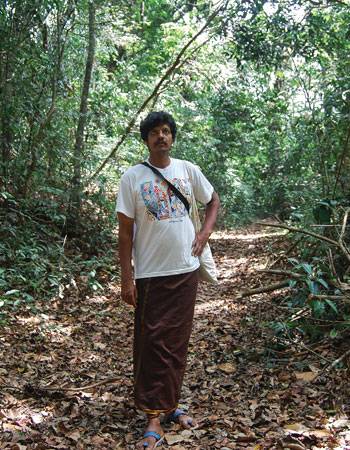 It was when the electronic boom began on the cusp of the Internet era that Arun, a young engineer in Mumbai, joined members of the Bombay Natural History Society on long forest walks. The interactions led him to ask: “How should I spend my life’s energy?” The answer came from within him and since then nature conservation has remained his true calling.

In 1997, he began teaching Environment Education at the Krishnamurti Foundation School in Chennai, where he remained for 12 years. This shifted his worldview. In 1997, he also joined the Students’ Sea Turtle Conservation Network (SSTCN), becoming the group’s coordinator in 2002. With the SSTCN, Arun helped protect the eggs of olive ridley turtles that nested on Chennai’s beaches, safely releasing newborn hatchlings, creating awareness on environmental issues through discussions with groups during turtle walks every weekend, and by speaking with children and their teachers in schools and colleges.

In 2009, Arun and his wife Poornima moved to Thiruvannamalai with their two children. Committed to safeguarding nature, the couple, with like-minded friends, launched a project called ‘The Forest Way’ where they ran environmental education activities, reforestation drives on the Arunachala Hill, and skill share workshops for locals. They also began a small alternative school for children from all socio-economic backgrounds in Thiruvannamalai. Called the Marudam Farm School, it teaches life skills including farming, gardening, carpentry, pottery, tailoring, cooking… along with academics. The school has been written about in many magazines and journals for its emphasis on sustainable living and its holistic approach to education.

Arun also conducts birding trips, nature education camps, tree walks and environmental education programmes for groups seeking to connect with nature. A man of many parts, he also happens to be the Secretary of the Annamalai Reforestation Society since 2018, and has been its treasurer since 2012. He currently collates and documents the biodiversity of the region he knows so well, through the India Biodiversity Portal, e-Bird and inaturalist.

The values that Arun, his wife and their team have carefully instilled in so many youth have clearly made a deep impact on the couple too. Attempting to walk lightly on the Earth, leaving behind the smallest possible ecological footprint, the family lives in a thatched house on an organic farm powered solely by solar energy. Arun uses public transport whenever possible and has not taken a flight in 25 years!

This man, in so many ways, is years ahead of his time, with each day a sincere pursuit in shifting perspectives. Without exaggeration he has dedicated his entire life to protecting and safeguarding not just nature-in-a-silo, but our collective future writ large.