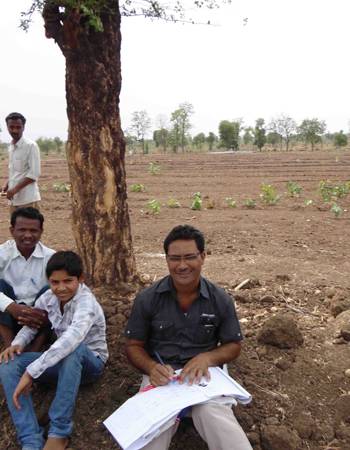 Azhar Sheikh He is a member of the Khadsangi Gram Panchayat (village council), holds an engineering degree… and saves tigers. Part of a community of round 200 families living in the Ramdegi village at Navegaon, at the northern end of the Tadoba-Andhari Tiger Reserve, he was unhappy that the people of his village lacked basic facilities including education and health and that they simply had no job opportunities. All farmers, they also lived in constant dread of tigers and leopards when their children roamed about unsupervised. Worse, carefully nurtured crops were often trampled by wild animals.

This is why he took the lead in winning unanimity through the gram panchayat to put an end to all problems in one fell swoop. On November 8, 2011, the villagers, led by Azhar Sheikh, passed a resolution demanding relocation of the entire village. He carried this resolution to the Maharashtra Government, which responded three weeks later by confirming that every family would be rehabilitated, with dignity, equity and alacrity on November 28, 2011.

Azhar Sheikh, was nominated as the President of the Rehabilitation Coordination Committee in Navegaon and he systematically planned and facilitated the shift from harm’s way to a new village site in the Chimur taluka that the families had unitedly chosen. Sheikh now ensured that every family was not merely financially compensated for their land, but were given financial assistance to construct new homes and that their lands were readied for farming. Electricity and water supplies were speedily provided, thanks to Sheikh’s dogged, coordination with all concerned government agencies. He also held meeting after meeting to ensure that the smallest grievance of every family was addressed, including the guarantee of compensation to unempowered widows and orphans whose interests he placed above those of the rest.

Sheikh left no stone unturned. At the new site he threw himself into home construction, farmland preparation, construction of school buildings, setting up self-help groups for women and he even helped create an Eco-tourism Committee so his people could benefit from the biodiversity that now flourishes in Tadoba. Virtually every department of the government helped this effort move along smoothly and the villagers now have safe homes, productive, irrigated fields, schools, and incomes from small-scale industries and tourism.

Forty-year-old Sheikh says he is proud of the small but crucial role he played in the rehabilitation process. “I was just a bridge between people and the park authorities. I will gladly help other villagers who wish to change their fortunes. I will also work to protect the tigers of Tadoba, and to see that living tigers improve the lives of those living next to them. The efforts of compassionate, caring individuals such as Sheikh give us reason to hope that India can be rewilded, even as its peoples’ lives are dramatically improved.