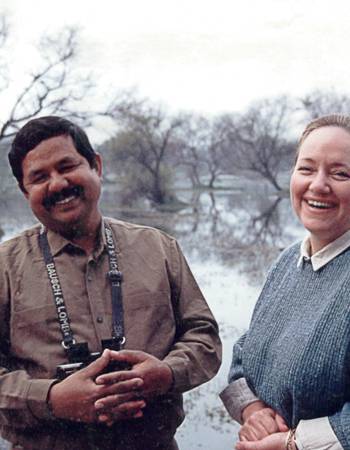 Bholu Abrar Khan He was a mere child when his father, a cook, moved to Bharatpur to work for the Maharaja of Bharatpur, who used to hold massive shoots for all manner of dignitaries. Years spent here saw him fall in love with birds that were once shot, and the swamps themselves became part of his soul. His father joined the forest department in 1964 and 12 years later, so did Bholu Abrar Khan. As a teenager, he used to tag along with the late Dr. Sálim Ali who visited the park frequently to ring birds and to whom Bholu Khan attributes much of his love and knowledge of birds. Recognising Bholu’s genuine interest, ‘The Old Man’ encouraged him and taught him all that anyone could ask to know about birds including identification of specimens in hand and in the field. He also learned how to conduct bird census camps and to handle birds safely. Bharatpur is one of the world’s most-visited bird havens and in the intervening years, virtually every celebrity who visited the swamps, has asked for and interacted with Bholu. This includes conservationists, scientists and wildlifers, including Sir David Attenborough whom he accompanied during the shooting of ‘The Trials of Life’. Bholu says one of the greatest pleasures of life is sharing his knowledge and love for birds with others – even one-on-one in the park – because in his words: “from knowledge flows action.” All he asks in return from those he guides through his swamps is that they lend their weight to the task on hand – to protect the birds that are now more threatened than ever in the history of the protected swamps. On a daily basis, he monitors the park, reporting to his superior officers any and all problems that come to light, which may include encroachment, poaching, animal diseases, unruly visitors, or even arrogant VIPs. Apart from closely keeping an eye on the avian denizens of Bharatpur, Bholu lavishes large amounts of time on children, showing slides and taking school trips on guided walks in the swamps. He also takes pains to explain to villagers how the park is critical to their future water and food security, and is reputed to have considerably smoothed relations between the park management and its surrounding local communities. Often praised for the work he does, he discounts his own role, saying: “I enjoy this work too much for it to be called work. If not for these birds, my life would have no meaning.” He is a crucial source of strength for forest officers, researchers and wildlife crime investigators. He has unearthed violations, conducted bird and mammal censuses, sat patiently to observe the nesting behaviour of rare species, fought fires through the night and helped train the famous rickshaw-puller-bird-guides of Keoladeo. Grateful for the air he breathes, he says he feels blessed to be able to wake and sleep each day to an orchestra of birds. Bholu Abrar Khan is an institution, a true ‘keeper of the swamps’.