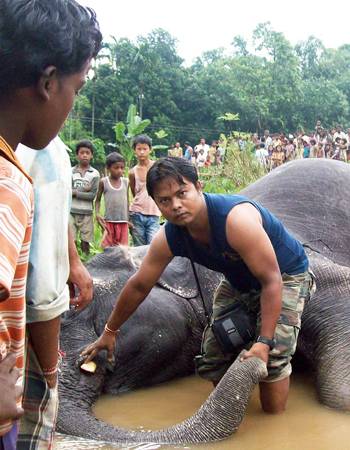 Dulu Bora is a resolute defender of the wilds. One of the driving forces behind Assam’s Green Guard Nature Organization, he works in the dense tiger and elephant hill-forests of Karbi Anglong, just south of the Kaziranga National Park in Assam. This region is notorious for its militancy and from time to time, Dulu encounters members from these separatist groups. To them he poses a simple question in response to the spate of animal deaths in the area, including rhinos brought down using AK-47 assault rifles: “Ok, so you have a problem with some people, but why take it out on wildlife?”

A passionate problem solver, he engages daily with communities living cheek by jowl with wild elephants and leopards. His work has significantly reduced conflicts between people and wildlife. An inspirational mentor, he recruits local college and school students to his cause and trains them to care better for our wild heritage.

Dulu has become a local hero of sorts and is well known for his often-dramatic escapades involving leopard cub, bear and king cobra rescues that would have gone a tragic route if not for him and his colleagues. Earlier this year, it took all his powers of persuasion to convince villagers from Mezigaon to give up an abandoned wild elephant calf because some individuals in the village insisted the calf was a reincarnation of their devi (goddess). It took several exhausting hours for him to calm the locals and escort the tired baby elephant to safety.

A man of the soil who walks to nature’s rhythm, Dulu Bora is the quintessential daredevil, a man on a mission whose dream is to protect the wildernesses of Northeast India for posterity.