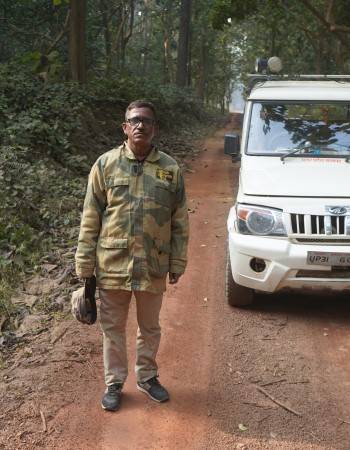 Brijlal was born into an agricultural family in the Gram Terwa Post, Pahada Lakhimpur Kheri District, Uttar Pradesh. He learned to drive trucks and jeeps from an early age. After completing his schooling, he registered for a government job with the District Service Planning Office in Lakhimpur. As serendipity would have it, the post of a driver was vacant at the Dudhwa National Park. And his life took a complete turn.

Brijlal was inducted as a truck driver in Dudhwa in 2003. He observed birds and trees, fascinated by the changing seasons of flowering and fruiting cycles. Driving around scientists as they went about their work, he asked to know more about the species they studied, fervently taking notes in his diary. He even walked and drove in these forests with the late legend Billy Arjan Singh, sharing deep conversations about nature and the wild ways of life. Brijlal calls him his inspiration.

Over the years, he learned to enjoy the company of the park’s nature guides. Observing and learning from them, he began to nurture an avid interest in birds and learnt their names, calls and migration patterns. In 2006, while attending a workshop on birds in the Dudhwa Tourism Complex, Brijlal chanced upon a copy of the Birds of Northern India. From it, he learnt to identify 450 species. Another book resulted in a new interest. A copy of Isaac Kehimkar’s Field Guide to Butterflies became worn thin as he taught himself to identify 136 species of butterflies in the park. A meticulous checklist of these species has been submitted by him to the park administration. While attending a workshop on the Bengal Florican by the BNHS in Dudhwa, Brijlal received a guidebook on snakes, which he accepted as both a gift and a challenge. His interest in the flora and fauna of Dudhwa pushes him to explore the unexplored. He can identify 50 tree species, 18 shrubs, six climbers, 20 grass species, six species of turtles and frogs and 20 species of snakes. He says his favourite plant is the sal tree, tall and regal, and he has a soft spot for the Bengal Florican and tiger.

Brijlal lives with his wife, Munni Devi, and three children. Every day, he awakens at 5:00 a.m., and peruses a book or two about wildlife over a cup of tea. He then cleans his vehicle and sets off for a day of patrolling the Terai landscapes of Dudhwa with the Sub Divisional Officer. His passion has won him the respect and attention of park administrators and peers alike.

His enormous thirst for knowledge and interest in wildlife have made him a custodian of Dudhwa’s biodiversity. Currently 53, he wishes to work as a nature guide in Dudhwa after retirement.

Brijlal, the unexpected naturalist, continues to document and share his love for the wild world.