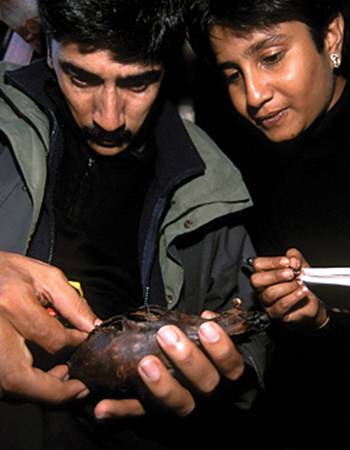 Charudutt Mishra has been involved in wildlife research and conservation for over 10 years now. His chief interest is in understanding human impacts on high altitude wildlife, the ecology of human-wildlife conflicts, large herbivore community ecology and carnivore ecology. He has helped set up experimental community-based wildlife conservation programmes in high altitude mountain areas in India (chiefly in Himachal, Ladakh and Arunachal) and has also been involved in post-conflict wildlife assessments in Afghanistan on behalf of the United Nations. His doctoral work (from the Wageningen University, Netherlands) in the Spiti region of the Trans-Himalaya contributed to a much better understanding of larger herbivore community ecology and human impacts on high-altitude wildlife. In 1999, as a result of his close relationship with local villagers in Kibber, they agreed to set aside areas free from grazing. This small effort has now grown with other schemes such as a successful livestock insurance programme and more villages in the region wanting to be part of the programme. In 2003, he led a biological expedition with Nature Conservation Foundation colleagues Aparajita Datta and M.D. Madhusadan into the remote Eastern Himalaya of Arunachal Pradesh, which among other things, resulted in the discovery of the Chinese goral Nemorhaedus caudata, a new record for the Indian subcontinent, as well as a primate species (tentatively named the Tawang macaque, Macaca sp.) that is new to science. Since 2001, he has been heading the India Programme of the International Snow Leopard Trust and is currently involved in initiating Project Snow Leopard in the five high-altitude states of India. He is presently working on programmes to manage human-snow leopard conflict, set up wildlife reserves on village lands and promote conservation-linked handicrafts development. He is simultaneously working with the Arunachal Pradesh Forest Department to establish the first high-altitude wildlife reserve in Tawang and West Kameng districts in the eastern Himalaya. Mishra hopes to promote a scientific understanding of wildlife ecology and human society in the high altitudes, and develop scientifically robust and socially responsible models of wildlife conservation that involve local communities.

Aparajita Datta has worked in the forests of Arunachal Pradesh for nearly a decade, studying and helping to conserve its rich wildlife. She began by examining how commercial logging affected squirrels and monkeys of tropical forests in the East Kameng district. She subsequently carried out an intensive long-term study of hornbills that among other things, examined their role as seed dispersers. Her academic interests are in plant-animal interactions especially seed dispersal; phenology and structure of tropical rainforests and the impacts of logging, hunting and shifting cultivation on wildlife. During her studies, she learnt much from her interaction with tribal communities and grew concerned about the impacts of hunting on wildlife. In 2002, she conducted a survey to assess hunting practices among tribal communities. Following this, she undertook gruelling foot-surveys in eastern Arunachal Pradesh with tribal hunters, discovering two species of deer previously unknown from India, the leaf deer Muntiacus putaoensis and the black muntjac Muntiacus crinifrons. Deeply concerned for Arunachal’s tribal people and its wildlife, she runs a conservation programme in the Namdapha National Park that tries to integrate the resident Lisu community in the monitoring and protection of wildlife and habitats that involves addressing their needs in primary education, health care and employment. In Pakke Wildlife Sanctuary, she is trying to encourage the interest shown by the Nishi community by training and employing ‘erstwhile’ Nishi hunters to assist in monitoring the ecology of hornbills. Conservation education is also a key feature of this programme and she has co-authored a recently published children’s book on hornbills and rainforests, apart from producing other educational material especially for children in the northeast. With her intimate knowledge of and love for the land, she aims to inspire care and stewardship for this amazingly biodiversity-rich state.