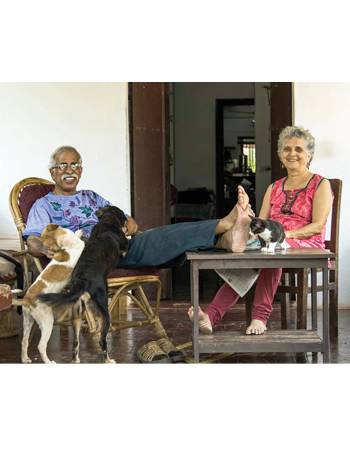 Claude and Norma Alvares The roaring personalities of husband-wife duo Claude and Norma Alvares epitomise the best of India’s seemingly shrinking intelligentsia. With their keen understanding of ecology, an incomparable commitment to environmental preservation, and laughing irreverence of the status quo, for 40 years the Alvares’ have adroitly shepherded Goa’s environmental movement. The implausible victories they have won along the way, many under the umbrella of the Goa Foundation, have been nothing short of monumental.

A partnership forged during their student years at Mumbai University, turned into a lifetime of social activism. In 1987, they filed the first Public Interest Litigation in Goa for the cancellation of mining leases to extract sand from beaches; in 1992 they were prominent in the successful ‘rebellion’ against American chemical multinational Du Pont, forcing it to retreat; in 1998 the Goa Foundation was nominated to the State’s Coastal Zone Management Authority; and Claude to the Supreme Court’s Committee on Hazardous Wastes; in 1997 and 1998, through the People for Animals-Goa, of which they are founder trustees, they halted the barbarous practices of organised bull fights and dog shooting in Goa; in 2002, they commenced a unique project to rehabilitate a mining site; in 2006, they took over Goa’s largest garbage dump… and within three months cleared it to the extent that they were able to host a tea party at the site;  in 2009, they set up a composting unit to deal with fish waste from the Mapusa fish market; and in 2012, they won a prodigious victory when the Supreme Court halted mining in Goa until it could be regulated on the basis of a writ petition filed by their foundation. For close to 15 years, Norma has been a member of the Animal Welfare Board of India and of the National Committee to Control Experimentation on Animals. But these are just the highlights. Alongside this immense body of work, the Alvares’ have written and published books, set up the indie Other India Bookstore, overseen two animal shelters, and mentored dozens of conservationists in their coastal state.

Their harmonious partnership may well be the result of their opposing personalities. Where the sharp-minded Norma is the pragmatic lawyer par excellence who leads the foundation’s legal tussles (she won a Padma Shri in 2002 for her legal work enforcing animal rights), Claude is the maverick philosopher and scholar seeking to decolonise thinking in the global south. Together, the Alvares’ have truly laid a foundation upon which generations of conscientious Indians can stake their environmental battles.