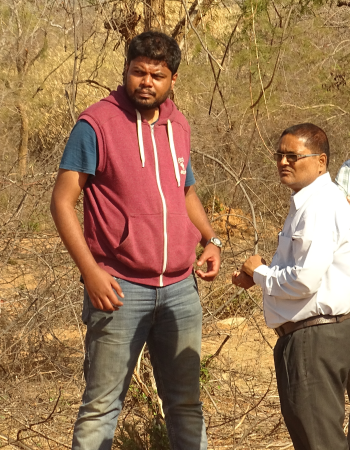 Growing up in the city of Kolkata, Debadityo Sinha graduated with a B.Sc.(Hons.) Zoology from Delhi University, and went on to pursue M.Sc.(Tech.) Environmental Sciences from Banaras Hindu University (BHU), Varanasi. It was during this tenure that he developed an ambition to conserve the environment and ecology of Mirzapur. He set up the first eco-club of BHU called ‘Eco One’ and was a recipient of the  ‘Environment Equity and Justice Partnership’ fellowship, 2011. Upon graduation in 2012, he set up the Vindhyan Ecology and Natural History Foundation.

Sinha has actively worked and succeeded in reviving waterfalls in Mirzapur, for which he was recognised with a ‘Best Story Award’ by ‘Development Alternative’ under ‘The City I Want’ Campaign. He has also undertaken specialization in Tropical Forest Restoration from Yale University; is a Board Member of EKO-Energy network; and Trustee of Uttarakhand based organization Ganga Today. He has also worked with organizations such as Legal Initiative for Forest and Environment, Wildlife Fund for Nature-India, Wildlife Trust of India, Earth Matters Foundation and Duleep Matthai Nature Conservation Trust.

Today, Sinha is actively litigating at the National Green Tribunal on matters related to environmental justice. His challenging of the environmental clearance to a 1320 MW coal-based thermal power plant proposed in district Mirzapur led to the National Green Tribunal revoking the clearance and ordering the forest be restored. He has filed several cases on biodiversity and ecology conservation related to River Ganga, the ESZ of Kaimoor Wildlife Sanctuary and emissions standards for thermal power plants which are disposed off at present. A compassionate environmentalist, he helps other activists in preparing scientific grounds for environmental litigations related to dams, coal and power projects in Uttar Pradesh and Uttarakhand.

Sinha’s current focus is the protection of Mirzapur’s forests and the declaration of a sloth bear conservation reserve in the region. He recently completed a camera trap survey of three forest ranges and authored a report on the findings in support of the proposed notification.

Dogged in his pursuit of environmental justice, and determined to shine a light on Uttar Pradesh’s ignored biodiversity, Sinha is an environmental campaigner worthy of respect and support