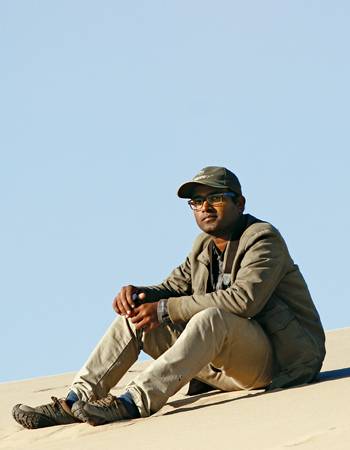 Dr. Pramod Patil is all these and more.

His empathy for grasslands and all the forgotten large and small species that depend on them has carried him far from the sterile confines of city hospitals. A full-time conservationist now, Patil has been appointed an Advocacy Officer with the Bombay Natural History Society (BNHS) and works holistically on all issues related to the protection of the Great Indian Bustard. Tackling policy and habitat management issues, grassland restoration and conflict mitigation with equal passion, he and the group of people he works with are now making steady strides towards securing the future of India’s grasslands.

Patil is a member of the IUCN Species Survival Commission of India, where his vast knowledge on the behaviour and ecology of the bustard has helped formulate creative solutions that are now being implemented by central and state governments on whose committees he serves. When he’s not ideating in conference rooms, Pramod is out in the field conducting awareness programmes for the public and implementing capacity-building exercises for forest staff. His persistent efforts to save the Gangewadi grasslands near the Nannaj Wildlife Sanctuary in Maharashtra won official protection for this crucial breeding habitat and he is currently formulating grassland revival plans for Rajasthan.

Realising that individuals must have institutional support for massive undertakings such as saving charismatic species like the Great Indian Bustard, Dr. Patil, an affable, but relentless communicator, also works closely with the Royal Society for the Protection of Birds and Birdlife International, U.K. While fatalists have begun writing lengthy eulogies for the endangered Great Indian Bustard, Dr. Pramod Patil remains determinedly adamant to reverse their decline by winning the support of local communities, government officials and experts in the task of protecting the bird, together with its vanishing grasslands.