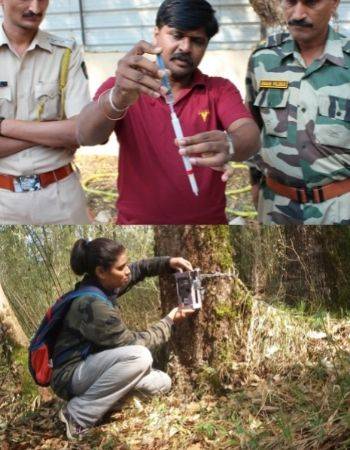 A joint wildlife award goes out to the former, a veterinary officer and the latter, a wildlife biologist at the Tadoba-Andhari Tiger Reserve, Maharashtra.

Dr. Ravikant and Prajakta’s quiet and dedicated work with the wildlife of tigerland is little known, but truly inspirational.Dr. Ravikant Khobragade exemplifies the very best in veterinary medicine, showcasing not just technical skills but also compassion and dedication. From bringing rescues home in his childhood, to risking his life to protect the lives of both wild animals and people, he is imbued with a deep desire to reduce friction and prevent traumatic human-animal interactions, In the process he has often placed himself at personal risk by attempting to tranquillise animals in an effort to save both animal and human lives. Within the last year, for instance, he managed to subdue

a department elephant after it has caused the tragic death of a local. On another occasion he was in the process of tranquillising an injured and sick tiger, which charged and managed to grab his foot in its jaws. Fortunately, his colleagues forced the tiger to loosen its grip allowing Ravikant to be pulled to safety. Injured, even before a full recovery, plaster cast in place, he was back at work for the forest he has sworn to protect. Prajakta is a stellar biologist and her work with the Forest Department, involving wildlife surveys and supporting communities is making a real difference to India’s wilds. Having worked with credible conservation organisations and universities on research projects, she has been published in journals of national and international repute. In her decade-long career, she has studied tigers, otters, vultures and wild dogs. This year, she will lead her 3rd All India wildlife estimation exercise at the Tadoba-Andhari Tiger Reserve. For Prajakta, community outreach, conflict management and improved communications with village communities through consultations on their terms has been one of the most rewarding aspects of her work.  With head and heart in sync, she describes her work at both

challenging and fulfilling. Her knowledge of hardcore conservation issues, a result of years of study and close observation of animals in the wild, have enabled her to bring rational science and social realities to the notice of policy makers and communities. She says she lives to save our last remaining wildernesses.

For their silent, vital service to the wildlife of Maharashtra, we honour them both.