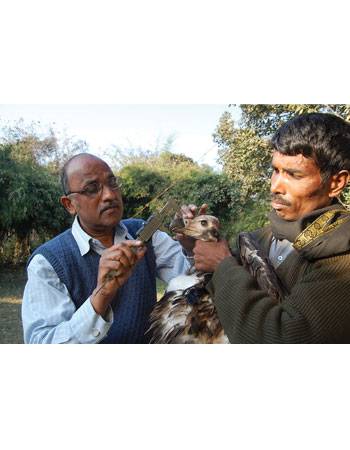 Dr. Vibhu Prakash’s (also see page 36) name is synonymous with vulture conservation in India. Stories from his childhood and youth contain some clues to his remarkable, 40-year journey of studying and conserving raptors in the country. A shy boy in Meerut who preferred the company of the plants and animals he encountered on his solo adventures outdoors, he was always encouraged by his mother to read books and articles on nature and was particularly influenced by the writings of Jim Corbett.

While he was a graduate student in the 1970s, he enjoyed birding along the Abu Nallah, a large drain that flowed through Meerut city. One day, he spotted a huge flock of European Starlings and, unable to identify them, he bought The Book of Indian Birds by Dr. Sálim Ali, but he didn’t find the birds within those pages either. Puzzled, he wrote to the celebrated ornithologist and was pleasantly surprised to receive a response. That was the beginning of his correspondence with the iconic Indian naturalist. After graduation, he decided to apply to the Bombay Natural History Society and got the job. His first posting at Point Calimere, Tamil Nadu, laid the foundation for his lifelong interest in raptors.

In the early 80s, he began working on his Ph.D. at the Keoladeo Ghana National Park, Bharatpur, Rajasthan, meticulously observing various species of raptors and recording their population changes and nesting performance over the years. He was awarded a Ph.D. degree by Mumbai University in 1990. In the early 90s, Dr. Vibhu Prakash and his team continued gathering data on vulture populations across national parks. If not for their constant monitoring, the sharp decline in numbers would have gone unnoticed. Racing against the clock, he and his colleagues initiated the vulture recovery programme, which became the guiding force for the Indian government’s response to the situation. He was involved in setting up the internationally acclaimed Vulture Conservation Breeding Programme with centres in Pinjore (Haryana), Buxa (West Bengal), Rani (Assam) and in Bhopal (Madhya Pradesh). Today, these centres manage more than 800 vultures. Additionally, 344 hatchlings have been successfully reared. This has been primarily instrumental in the recovery of three Gyps vulture species – the White-backed
G. bengalensis, Long-billed G. indicus and Slender-billed G. tenuirostris.

Dr. Prakash played an instrumental role in the banning of veterinary use of diclofenac – the drug that caused the decline in vultures. With over four decades of raptor studies and vulture conservation behind him, he continues his vital work in the field. Today he is a Ph.D. guide for students at the Mumbai University. His wife Nikita works shoulder to shoulder with him at Conservation Breeding Centres and his two sons, Rishabh and Saurabh, though engineers by profession, are very keen on raptors too.

Dr. Prakash has been the Deputy Director and Principal Scientist of the Bombay Natural History Society since June 1995. ­He serves on various national and international committees, organisations and groups regarding the protection of raptors in general and vultures in particular. Besides which, he has also been extensively featured in various renowned media platforms.

Dr. Prakash is a national treasure, as valuable to conservation science as our raptors are to our ecosystems. For his life’s work of pioneering scientific research and timely, incisive conservation efforts to protect our vultures, we honour him.