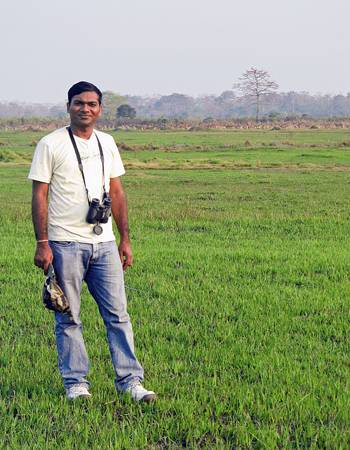 Jitendra S. Ramgaokar, Vishal Mali and Vishal Bansode Working closely with Korku tribal communities, Jitendra S. Ramgaokar, a 2006 batch officer of the Indian Forest Service began work in the Melghat landscape as Deputy Conservator of Forest, Chikaldhara in 2011. He has been quietly but confidently going about the business of developing stakes of local communities in conservation and responsible tourism. He is also working with determination to keep tigers and their associated wildlife safe from harm’s way.

Ramgaokar is working with colleagues to strengthen the Forest Department’s wildlife crime detection capability through the recently institutionalised Wildlife Crime Cell. As a key member of the investigation team, ably assisted by Vishal Mali and Vishal Bansode, he was critical to the arrest of over 20 poachers, including some traders from Delhi, involved in a poaching case in the East Melghat Division in June 2013. All these offenders were arrested and are currently being tried. Working closely with the police, the investigating team used mobile phone records and activated a network of informers to apprehend the perpetrators from different parts of India in record time.

Mali is the ACF, Protection, Gugamal Division of the Melghat Tiger Reserve and he has shown tremendous potential despite this being his first posting after training. He has actively conceptualised the wildlife crime cell in Melghat. Bansode has been working with the Forest Department in Melghat for over a decade and he played a pivotal role in this case by analysing data and carrying out recces to find the poachers.

Aware of the need to win over communities living around the park, Ramgaokar worked to guarantee employment to local youth, whom he introduced to the potential of livelihoods from sensitive ecotourism. He guided Chikaldhara’s Joint Forest Management Committees (JFMC) in villages encouraging them to levy disturbance fees from tourist vehicles, training guides and offering vocational training that provided young persons with jobs. The Rs. 20 lakh that was collected over two years was distributed directly to villages that now manage sensitive tourist sites around Melghat and Chikhaldara town. As many as 27 young persons from nine villages are now employed, and an ecotourism complex at Amzari village, with residential accommodation and other facilities offers a reliable source of income through a pooled village development account. Another group of 15 people have been trained as naturalists and tourist guides.

There can be no doubt that Ramgaokar is part of Melghat’s solution. In this, one of India’s most dynamic tiger habitats, the infusion of purpose has triggered several responses from the Maharashtra State Government, which has made funds available for an effective wireless communication system, fire-fighting capability, and patrols of the boundary – all geared to ensure that villagers living directly on Melghat’s boundary benefit more directly from living wild species than dead ones.

For this, we honour him and his team.