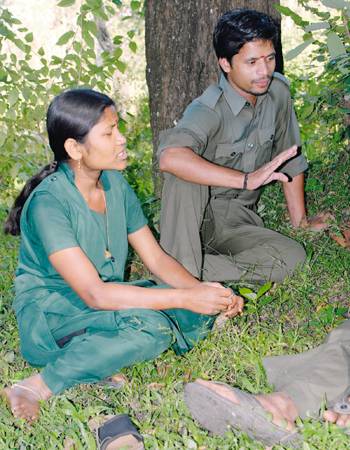 Latha And Aneesh The Mannans are amongst the most prominent of southern Kerala’s tribes. ‘Mannan’ quite literally means ‘king’. Hunter-gatherers by birth, most Mannans are now agriculturists, largely because the forests that once sustained them were hacked to make way for modern ‘development’. The bulk of the community lives in and around the Idukki District. They are led by a supremo called the Rajamannan or King of Kings. Expert fishers, Mannans once took sustenance from their lakes and rivers and supplemented their diet with wild honey, gooseberry, a forest plant they call dammer, creepers, flowers, seeds and the barks of trees.

Latha was born the eldest of three daughters to Gopalan and Lakshmi. With only very basic schooling, she helped her parents farm and collect firewood and forest produce. Her grandfather, a Kani Chieftain, is still referred to as Delhi Pandian, because he is among the few who had actually travelled to New Delhi to meet Indira Gandhi in the late ’70s.

Aneesh, the second son of D. Raju and Kunjamma, too has had only very preliminary schooling and, like Latha began life by helping his parents fish, farm, and collect forest produce. Like most Mannans, he used to enter the Periyar Tiger Reserve daily to obtain the resources his family needed for their day-to-day existence.

The rhythm of life of both these proud young people who had become increasingly alienated from the forests of their ancestors, recently underwent a dramatic change – for the better. Working with the Periyar Tiger Reserve authorities, both young people were enrolled in an exercise that sought to tap their innate knowledge of the forest and their own culture to enhance the visitor experience of the very large number of tourists who visit Periyar each year. After receiving training in how to communicate their intimate knowledge of the forest, they began to guide school and college children through Periyar as guides. Latha and Aneesh are two of the 18 proud members of Periyar’s Tribal Heritage Ecodevelopment Committee. They are trained nature interpreters and guides and are a respected part of Periyar’s forest protection force. This earns them a livelihood and an honoured place in their own society. If you go to Periyar today, if you are lucky, Latha or Aneesh may take you on a green walk, a border hike, bamboo rafting or an anti-poaching foot patrol through a forest they know intimately and love dearly. While most of their community is being distanced from their forests, these two young naturalists have made the journey back home to where they belong and they swear they will never allow anyone to destroy or degrade Periyar as long as they live.

They jointly share a Sanctuary-ABN AMRO Young Naturalists Award for 2007.