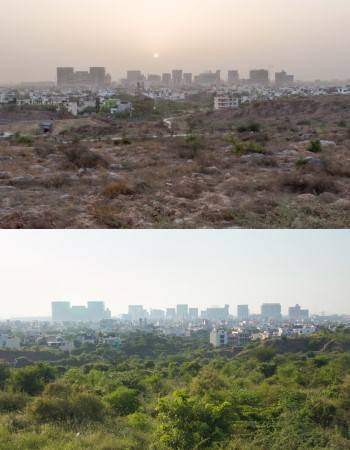 Gurugram’s green defenders and rewilders of the Aravali Biodiversity Park

What was once a stone quarry and malba dumping site in Gurugram is today a thriving wilderness thanks to the iamgurgaon (IAG) team and the citizens’ movement that they sparked. Their colossal rewilding effort that included forging collaborations with municipal authorities, corporates and private citizens, led to the birth of the 380 acre Aravali Biodiversity Park.

A part of the Aravali mountain range in the Nathupur Village of Gurugram, the land where the park now stands was extensively mined for over four decades, which along with the illegal felling of trees, cattle grazing and waste dumping led to severe degradation of the land. In 2009, iamgurgaon, a citizen’s initiative co-founded by Latika Thukral and Swanzal Kak Kapoor, stepped in. They proposed the idea of rewilding the land into a biodiversity park and approached the then Municipal Corporation of Gurugram Commissioner, Rajesh Khuller, who agreed. What followed was a year of planning with architect Atal Kapoor and other stakeholders, which led to the opening of the park in June 2010. Shortly after, IAG got Vijay Dhasmana, an ecological practitioner, on board to draw the rewilding vision for the park. They set out by creating a nursery of native plants, extensive research and surveys to bring back the forest habitat of the Aravali Range -- forests of salai Boswellia serrata, dhau Anogeissus pendula, kaim Mitragyna parvifolia and dhak Butea monosperma.

After eight years of persistent efforts, massive plantation drives and careful nurturing, the park now hosts a mosaic of micro habitats, and boasts over 300 species of native plants, from trees and shrubs to herbs, climbers and grasses. The vegetation in turn attracts varied wild fauna! Several seasonal waterbodies once lying dry surrounded by infestations of invasive species Prosopis juliflora, have been restored.

Iamgurgaon (IAG) sets an example for city residents across the world. From navigating red tape to organising seed collection drives, they have harnessed the power of human collaboration to create an oasis in between two thirsty cities – Delhi and Gurugram. Though the battle to protect this rewilded patch of the northern Aravallis is far from over, it is worth stopping a moment to appreciate what this collective of citizens has accomplished against all odds.