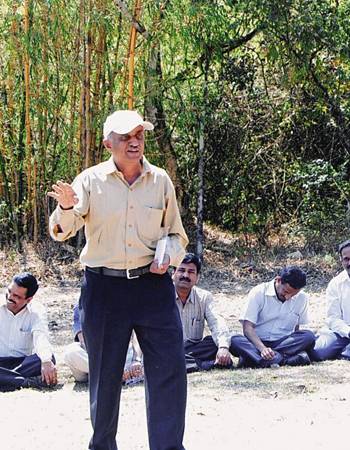 M.N. Shadakshari Teachers are our first line of defense in winning the support of our children for wildlife protection in India. And teachers like M.N. Shadakshari exemplify both purpose and drive in reaching out to the next generation. Based in Chikmagalur, right next to the Bhadra Tiger Reserve, he has spent a lifetime helping children develop organic connections with nature. He is also the District Chief Commissioner of Scouts and Guides, for which he was awarded a medal by the President of India, for his 44 years of service.

He began his teaching career in August 1968 with the Mountain View School in Chikmagalur and served as the Vice-Principal for 23 long years before taking over as Principal of the Model English High School, Uppalli, on November 1, 1991, a post he continues to hold.

Quite literally, thousands of students have been guided to walk paths that take them closer to wild India through an exploration of science and nature. Many young people say they were so inspired by him that they have chosen to work on conservation issues full time. Long before it became fashionable to do so, he used to deliver talks and hold workshops for young persons on global warming, the need to cut individual carbon footprint, the protection of wild species and how to strategically tackle conservation hurdles. Years after they left school, his students still remember “Shadakshari Sir’s” simple lessons and kindly guidance. Way back in 1982, he began organising nature camps and hikes for children who he believed would learn more from actual visits to wildlife sanctuaries and national parks than they could from books.

Not satisfied with restricting his communication to students, he continues to bring conservation issues to the notice of bureaucrats and politicians. He worked with wildlife conservation groups to implement the Bhadra Rehabilitation Project, has exposed illegal mining and felling of trees in forests and the pollution of Karnataka’s pure rivers. He believes that we owe our children a green future as an article of faith and has ignited the imagination of students and instilled in them a visceral love for nature.