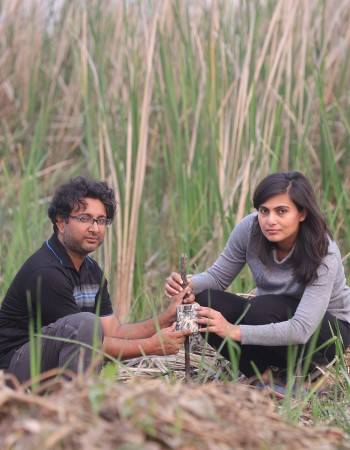 Co-founders of Human and Environment Alliance League (HEAL), Meghna and Suvrajyoti have single-handedly changed the face of conservation activism in Bengal, inspiring hundreds in the process. They have meticulously undertaken photo and video documentation of the barbaric ritualistic hunting of hundreds of wild animals since 2016. This culminated in two public interest litigations before the Calcutta High Court. They triggered a court directive to ensure that the state government, railways and Forest Department tackle the issue, apprised authorities of the hunters’ modus operandi and worked to ensure implementation of the court’s orders. Despite facing dangerous and adverse situations on the field, they persevered and helped achieve a significant reduction in ritualistic hunting by almost 90 per cent! The duo went on to activate the Zero Hunting Alliance, a participatory conservation initiative with volunteers across seven districts of Bengal.

HEAL is working across the state on various conservation issues including prevention of hunting by enforcing laws, awareness generation, wildlife rescue and rehabilitation, human-wildlife conflict mitigation and habitat protection. Between Meghna’s stellar legal and organisational skills and Suvrajyoti’s herpetological and field expertise, they devise holistic approaches to overcome conservation hurdles. The documentation of human-elephant conflict by them and their team in South Bengal was used in a court case, leading to a ban on throwing fire torches at elephants. Following this, they established a small team in the region to deter elephants from crop fields using bright lights and loud sounds. In the Sundarbans, where certain fishing practices can be dangerous to humans, wildlife and the mangrove ecosystem, they helped raise funds for freshwater fish seedlings to promote farmed fish as an alternative income source. Their documentation of abuse of snakes by snake charmers followed by complaints and follow ups with various state authorities put an end to the 400-year old snake festival Jhapan at Bishnupur in West Bengal, where snakes were abused in blatant violation of wildlife laws. The duo also tracks poachers -- be it bird trappers or dolphin oil traders -- and works with the Forest Department to plan raids and conduct arrests.

Meghna has helped litigate numerous cases for wild habitat protection, including the preservation of wetland habitats and legalisation of elephant corridors along with prevention of elephant deaths due to causes such as electrocution. A significant part of the data collection and field work for these court cases are done by Suvrajyoti, who also conducts training workshops for the Forest Department on rescue and rehabilitation of reptiles. He also trains community health workers on snakebite prevention and care. He and his team from HEAL undertake wildlife rescue and rehabilitation in and around Kolkata and in districts of southwestern Bengal. During cyclone Amphan, they rescued over 150 birds, and conducted massive relief efforts for affected families across six villages in the Sundarbans.

Together, this courageous duo is safeguarding the rich biodiversity of West Bengal, and supporting the communities that live in their midst. They hope to inspire a movement to make conservation mainstream.