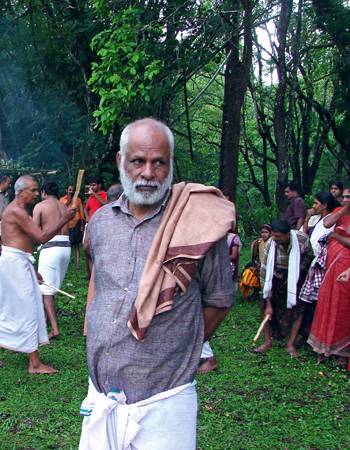 N. Badusha, A simple man who lives to protect forests, he has been fighting the illegal sandalwood trade, forest encroachments in Wynad, commercial plantations on forest lands and the trapping of wild elephants. Recently, Badusha successfully steered the first-ever voluntary relocation of 50 families from the Wynad Wildlife Sanctuary, which has led to several hundred families seeking voluntary relocation to improve their own conditions of life, while releasing vital lands for wildlife.

The battle for India’s biodiversity is primarily fought by two kinds of people – the soldier, who fights daily battles through his activism, writing, protests, demonstrations and petitions; and the planner, an individual who works towards long term policy and legal framework through awareness and academic understanding of environmental degradation. Once in a blue moon, we are fortunate to have a hybrid of both men, a leader, who is able to balance the contradictions between political parties, tribal leaders, environmentalists, the media, intellectuals, officials and locals. N. Badusha is one such man.

A farmer, he turned to political and environmental activism in the 1970s, and later focused on defending wild habitats, a cause to which his entire life has been devoted. His efforts have helped secure the Wynad Wildlife Sanctuary (which includes the Muthunga and Tholphatti sanctuaries) from forest fires, illegal timber felling and mining. The ripple effect of his work has ended up benefitting even the neighbouring Protected Areas of Bandipur, Nagarahole, Mudumalai and Brahmagiri.

This down-to-earth, pragmatic man inspires respect in everything he has achieved over the years, from fighting wars for fair relocation policies, to shutting down mining and tree-felling operations, to tackling issues like forest fires and the loss of local ecology due to exotic species invasion. As lynchpin of the Wynad Prakruthi Samrakshana Samithi, he has set high personal standards, to benefit both people and parks.