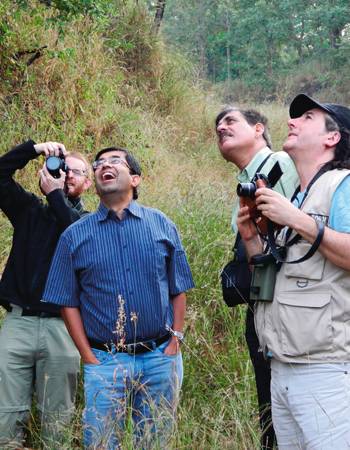 The Maharashtra Government for enabling and encouraging Praveen Pardeshi, IAS, Forest Secretary, Government of Maharashtra, to reinvigorate and consolidate wildlife conservation in the state.

Praveen Pardeshi is convinced that the interests of Maharashtra and India will best be served if all sectors of society, government and non-government, work together to restore the fabled natural wealth of this magnificent state. This, in his view, will secure our water, food and climate security at an affordable cost and will end up offering right livelihoods to lakhs of forest dwellers and rural poor.

In the past six months, his leadership and sensitivity have prompted a wave of support for forest conservation from wildlife activists, Forest Department officials, state administrators and even the office of the Chief Minister and Forest Minister of Maharashtra. In turn, this has resulted in path-breaking administrative measures that have yielded rich ecological returns. In the Melghat Tiger Reserve, for instance, vital new habitats have been created for tigers because the Maharashtra government was able to work with the Central Ministry of Environment and Forests to finance the rehabilitation of villages, which for years had been petitioning to be resettled closer to urban markets. What is more, over 1,200 front-line vacancies of forest guards and Range Officer posts were filled, thus lending critical protection to hitherto unprotected wildlife habitats in Maharashtra. The voluntary rehabilitation of villages from Tadoba, Pench and Melghat have been prioritised under the state plan and CAMPA funds will be used to create win-win outcomes for people and wildernesses. Eco-development programmes have been formulated under which nearly 100 villages are being given biogas and stall fed fodder to minimise their impact on the forest. In order to make the initiative sustainable, park authorities will use entry fees to enhance protection initiatives as well as the biogas programme. The buffer zone territorial division in Tadoba has been placed under the integrated control of the Field Director and Project Tiger in a bid to promote wildlife-oriented management plans. Already, incidents of overgrazing and forest fires have declined, all with the participation of local communities. We are certain that such dramatic and positive transformations that provide a win-win for forests and people will soon be emulated by other states.

For this we honour Praveen Pardeshi and the Maharashtra Government.