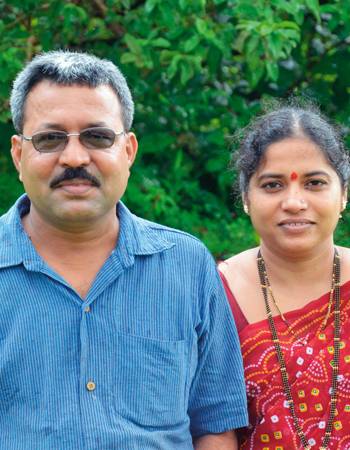 Rajendra and Pournima Kerkar, Their children are their life, and they believe that the lives of their children is living nature. This is why this dedicated husband and wife team have chosen to spend their entire existence protecting the forests, rivers, lakes, mountains, coasts and wildlife in the tri-junction of Goa, Karnataka and Maharashtra.

The Kerkars have delivered over 3,000 talks on the ecology of the larger Goa landscape to small and large audiences and have worked doggedly with conservationists to have the Mhadei and Netravali Wildlife Sanctuaries notified. Believing that local communities are vital to the protection of tigers and wildlife of the area, they have won massive public support against mining and destruction of forests and pollution of rivers and coasts. Rajendra also scripted an award-winning film called ‘Devrai’, which helped to power grassroots action, from youth clubs, mahila mandals and self-help groups. Evangelists for nature, they routinely organise mobile exhibitions to highlight, among other things, the fact that tigers are indeed permanently resident in Goa. Rajendra is the State Convenor, Goa River Conservation Network, Coordinator, Goa Foundation, and a member of several government boards. Pournima is a published poet and a fulltime teacher at the Dynanprakash Mandal, Bicholim Higher Secondary School, Mulgao. Both use the media to help promote local folklore and are recognised as key children’s rights activists. Green Teachers to the core, they live so that our children have a better tomorrow.

For this we honour them.