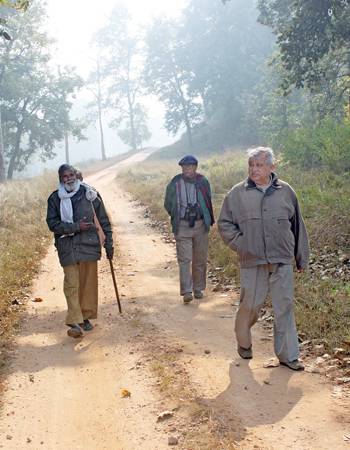 S.E.H. Kazmi One of my earliest memories is walking in tow of Abba and his men in the forests of the Palamau Tiger Reserve while they tried controlling a forest fire that had engulfed a hillock. Barely four years old then, I was not allowed near the site, but I remember watching him trek up the hill to oversee the firefighting. His entire career has perhaps been one great uphill trek against the forces that wish to destroy the natural world in a conflict-ridden landscape, while simultaneously standing shoulder to shoulder with the poorest of poor.

His reports against the Kutku dam and his unflinching support towards the affected villagers played a key role in stalling the ill-conceived project. His sustained crackdowns against poaching gangs and illegal Katha smugglers in Palamau would eventually culminate in a bid on his life in 1998. His negotiations with MCC ensured that they handed him 136 kg. of ivory and a leopard skin recovered by them. Even the Army was forced to give up on the proposed Netarhat field firing range at the southern end of Palamau when he refused to give the requisite clearances. The Horilong UG mining project too had to be abandoned for Daltonganj (South) Division’s upright DFO would not bend. At the same time, he earned the respect of the locals due to his honesty, people-friendly projects, warmth and friendliness. This translated into goodwill among the Naxal rebels too, who lorded over the state’s forests, so much so that in 2003 the CPI (Maoist) gave him an abhaydaan (official proclamation of safe passage through all rebel-controlled areas).

In 1998, he was transferred to Hazaribagh, where his battles with the coal mining mafia are well remembered. He also ensured the proposed Hazaribagh-Koderma railway line was realigned to save the imperiled Hazaribagh Wildlife Sanctuary. The compensation received under FCA was used to carry out a string of people-friendly work, for which villagers in Hazaribagh are still grateful.

In the last leg of his career, Abba requested to be returned to the place he had loved the most, Palamau. He joined as its Field Director in 2011, when the reserve was in shambles. Despite being crippled by a staggering staff vacancy, he and his men managed to slowly bring back some semblance of order. He would camp alone in abandoned field positions, rebuild destroyed infrastructure, resurrect wireless networks, re-establish mediation channels with rebels, walk miles with the trackers, rekindle old friendships in remote villages and make new ones. He initiated the first camera-trapping exercise in Palamau and within months, the first images of tigers in more than 15 years and other myriad wildlife (including some thought to have gone extinct) surfaced. By the end of 2011, the men returned to reoccupy their field posts. He also steadfastly denied security forces the use of departmental infrastructure for anti-insurgency operations in order to protect his staff and the infrastructure from a Naxal backlash. He encouraged young researchers to come and work in Palamau, even sharing his official residence with them. All this resulted in the first ever digitisation of field data, significant leaps in field research and addition of new species.

While he never admits it, I personally saw the miraculous resurrection of Palamau during his tenure. Unfortunately, soon after he was transferred in late 2014 due to the government being apprised by the police of a plan being hatched to eliminate him (by the same group responsible for the 1998 blast), many of the gains made were lost. But not all. A few weeks before his retirement, he was informed by a researcher he had appointed that they had camera-trapped otters in Palamau, the first record of the mammal in Jharkhand in 119 years. And so, hope still floats for the tiger reserve, even if barely. Abba and his team played their part in safeguarding our wild edens, and they played it well. It is now time for us to play our parts.