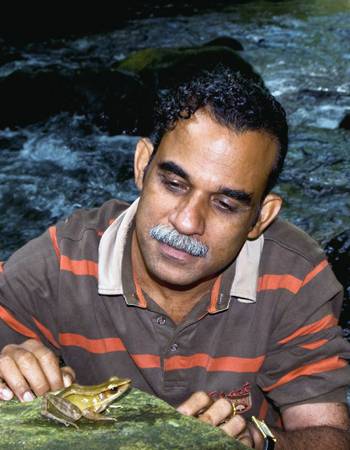 Sathyabhama Das Biju Brilliant, self-effacing, and forthright, S.D. Biju is one of India’s finest field biologists. He started out as a botanist but his passion for frogs soon prompted him to work for a second PhD in Zoology from the Amphibian Evolution Lab in Brussels. Focusing on the rapidly declining amphibian population in India, he quickly realised that we could lose all our frogs within a few short years if dramatic steps were not taken immediately. Over the years, his mission resulted in the discovery of several amphibian species, including several in the Western Ghats. In 2003, he discovered an entirely new family of frogs (Nasikabatrachidae), hitherto unknown to science.

He went on to win the prestigious IUCN Sabin Award for conservation in 2008. And scientists honoured him by naming a frog after him – Polypedates bijui.  A critical aspect of his work has been the combination of molecular techniques with traditional approaches. His findings led to major taxonomic debates and his postulations were eventually ratified by his most respected international peers. Biju is also credited with the discovery of the famed “purple frog” Nasikabatrachus sahyadrensis, the first Indian canopy frog Raorchestes nerostagona and the smallest frog in India – the 10 mm. Nyctibatrachus minimus. Often funding his own explorations, Biju’s efforts have already thrown up 100 new species and led to the formal description of 54 new species. This is the highest ever tally of any land animal by an Indian scientist. His quest now is to rediscover amphibian species given up as ‘lost’. Today, as part of the faculty in the Department of Environmental Studies, at the University of Delhi, he conducts research and teaches. He also leads a carefully-selected team that is in search of the ‘Lost Amphibians of India’ and the yet unknown amphibians of India.

He has profoundly changed people’s lives and has guided and mentored scores of young scientists. In his words, “I want to motivate budding young researchers. And if my work influences even a tiny community, my purpose would be fulfilled.”

For this we honour him.