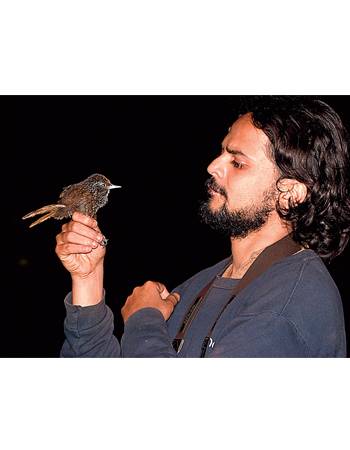 Shashank Dalvi The curiosity that spurred Shashank Dalvi to wander the forests of the Sanjay Gandhi National Park alone as a boy, also won him the guidance of a battalion of Mumbai’s eminent naturalists. By tailing these early mentors and absorbing every odd tidbit of information on the natural world, Shashank soon evolved into a stellar naturalist himself.

His interest in birds took him to the forests of Arunachal Pradesh, where he sharpened his skills as a professional bird guide and participated in bird and herpetofaunal surveys including the Eaglenest Biodiversity Project (which involved work on newly-discovered and re-discovered species of birds and reptiles).

After a B.Sc. in Zoology from Bhavan’s College, Mumbai, Dalvi then cemented his reputation as a naturalist and scientist to watch out for by enrolling in WCS India and NCBS’ celebrated M.Sc. in Wildlife Biology and Conservation programme, and producing the first study to combine biogeography and genetics on bird fauna of Northeast India as part of his thesis on ‘Role of Brahmaputra and hill ranges as a biogeographic barrier for avian fauna of Northeast India’.

In 2012, he was a member of the team that discovered the shocking Amur Falcon massacre in Doyang, Nagaland, which catalysed an international conservation movement the likes of which India has rarely seen. The team’s findings were published in the journal Science and in 2013, Dalvi served as a core member of the Amur Falcon Conservation Project that successfully stopped the hunting of these exquisite migrating falcons by triggering high-level government support, patrolling and enforcement, community engagement and a comprehensive conservation education programme.

In 2015, Shashank completed the first Indian ‘Big Year’ for birds, which took him across remote corners of 20 states of India, and in 2016 he was part of the team to describe the Himalayan Forest Thrush, a new bird species to science, and only the fourth bird to be described from India since its independence. A self-professed ‘bird nerd’, his long-term goal is to pioneer a nation-wide conservation programme for birds outside Protected Areas.

His vast knowledge, commitment to science, and love for grueling expeditions has catapulted Dalvi into a league of his own.