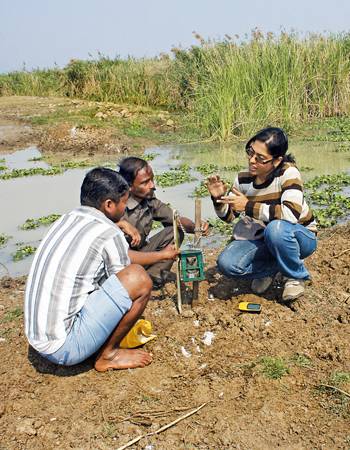 Tiasa Adhya Though so-called charismatic megafauna have captivated humans, their smaller, less charismatic but no less important counterparts remain largely unknown to common people. Tiasa realised that her goal in life is to contribute to the conservation movement through conducting wildlife research, writing, and proactive threat-reduction programmes. Being a wildlife biologist by training and a conservationist at heart, her constant endeavour has been to fill the gap between theoretical knowledge and conservation practice.

Tiasa has achieved this by conducting sound research and by implementing science-based conservation efforts by involving common people from many walks of life.

Her goal is to take a conscious ethical stand for conservation of the only tropical wetland felid in South Asia – the fishing cat.

Since the inception of The Fishing Cat Project in 2010 by Tiasa and her partner Partha Dey, she has studied the ecology of the species and used what she has learned to create conservation efforts. Tiasa’s study provided the first quantitative evidence of the fishing cat’s strong affinity to marshland-waterbody complexes and this helped in the identification of three main occupation zones in southern West Bengal for the fishing cat. One of these zones is threatened by industry, while the other is relatively safe because of local people’s practice of cultivating marsh vegetation and culturing fish.

Her efforts have helped litigation cases to safeguard marshlands and increased awareness. In places co-inhabited by fishing cats and people, the main threats come from retaliatory killing and poaching. Her campaign sent five fishing cat poachers to jail and set an exemplary precedent. She has also raised tolerance for fishing cats by creating a cultural value for them. As a result four Gram Panchayats have submitted a proposal to the State Biodiversity Board to gain recognition as a Biodiversity Heritage Site.

Tiasa’s study has shown that fishing cats can prevent rat-borne diseases from spreading locally and be a friend to farmers by preventing rat-induced crop losses. She has collaborated with three tiers of the governance structure in the Howrah district to make fishing cat conservation a matter of concern amongst policy makers and locals. In response, the Howrah Zilla Parishad declared their support for fishing cat conservation through the formation of Fishing Cat Protection Committees to raise awareness about the state animal’s plight. In 2011, Tiasa became a member of the Fishing Cat Working Group, an international body of fishing cat researchers, conservationists, activists, and enthusiasts. She was part of the first International Fishing Cat Symposium in 2015 in which she was engaged in developing a conservation strategy for the species across its geographic range. She believes that the masses are detached from ecology and seeks to use different mediums to bridge this gap. While she loves writing, her team is presently engaged in creating a docu-feature film on the problems for the fishing cat in West Bengal.