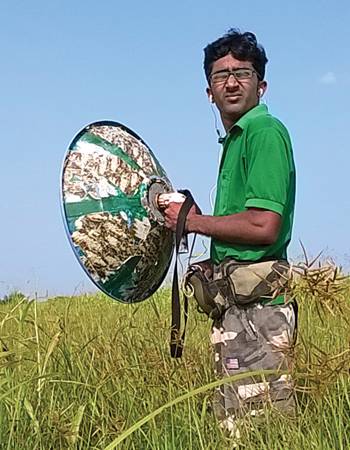 Viral Joshi India has a huge asset in young Viral Joshi, who is destined to be one of India’s finest ornithologists. At first his resume reads rather commonplace – a Bachelors’ degree in psychology, a certificate in M.S. Office, and another in hardware and software networking. Scroll further down and you get to know the real Viral – the one that has some of the country’s most eminent birders knocking with increasing frequency on his door.

A skilled naturalist, Viral is, poetically put… a connoisseur of birdsong – able to identify dozens of avian species through little more than their lilting (or for that matter harsh) calls. Often using personally-invented recording equipment, he has managed to record over 500 different Indian bird calls in the country, and made them available without copyright on xeno-canto, a global birdsong online database. That’s not all. Using their calls he has added to the bird list of Saurashtra, incorporating difficult-to-identify species including the Bristled Grassbird and the Grasshopper Warbler.

At 22, Viral is already a veteran lecturer, regularly relied upon by the Gujarat Forest Department to help with capacity building within their ranks. He has also assisted important bird studies, most recently the Gujarat vulture survey. Willingly volunteering for wildlife rescue and rehabilitation missions, he works with snakes with the same facility as he does birds.

Rooted in rural Gujarat, his lack of ‘scientific background’ has not stopped him from mastering nuanced ecological theories in English. Nor have his commitments to natural history studies stopped him from following his own dream projects. Viral Joshi is a remarkable young man, an asset to bird studies and conservation.