Forests of India under Threat

Scientists find infrastructure has led to 71% reduction in forest patches

Scientists from Foundation for Ecological Research, Advocacy and Learning (India), Centre for Wildlife Studies (India), University of Goettingen (Germany) and Columbia University (USA) suggest an environment-friendly approach towards future infrastructure development in India. Tropical forests are one of the most diverse ecosystems in the world. They are also among the most threatened ecosystems – undergoing rapid land-use change and fragmentation. Infrastructure, especially linear structures such as roads, railway lines, power transmission lines, canals, and pipelines create linear gaps that split a contiguous forested area into smaller patches.â€‹ Forest fragmentation leads to habitat and biodiversity loss as well as disruption of critical ecosystem processes.

In an article published in the journal, â€‹Land Use Policyâ€‹, Rajat Nayak, Dr.Krithi K. Karanth, Dr. Trishna Dutta, Dr. Ruth Defries, Dr. K. Ullas Karanth and Srinivas Vaidyanathan highlight how infrastructure development projects in India have fragmented forests, and adversely affected wildlife in these areas.â€‹ This is the first research study to quantify the effect of linear-infrastructure development on forest structural-connectivity in India.

“â€‹In a biodiversity-rich country like India, there is an urgent need to integrate conservation concerns into development projects. Fragmentation due to linear infrastructure developments can be minimised in the future if these structures are rerouted to avoid fragmentation of such large forest patches or effective mitigation measures can be builtâ€‹,â€‹” says Rajat Nayak who led the study in the Western Ghats and Central India.

India is one of the fastest-growing economies in the world. Its infrastructure-network is undergoing great expansion and upgradation. In the process, tropical forests of India are increasingly impacted by infrastructure development. Fragmentation of habitat isolates animals, reduces their mobility, and adversely impacts the entire ecosystem. It can also reduce gene flow between patches. 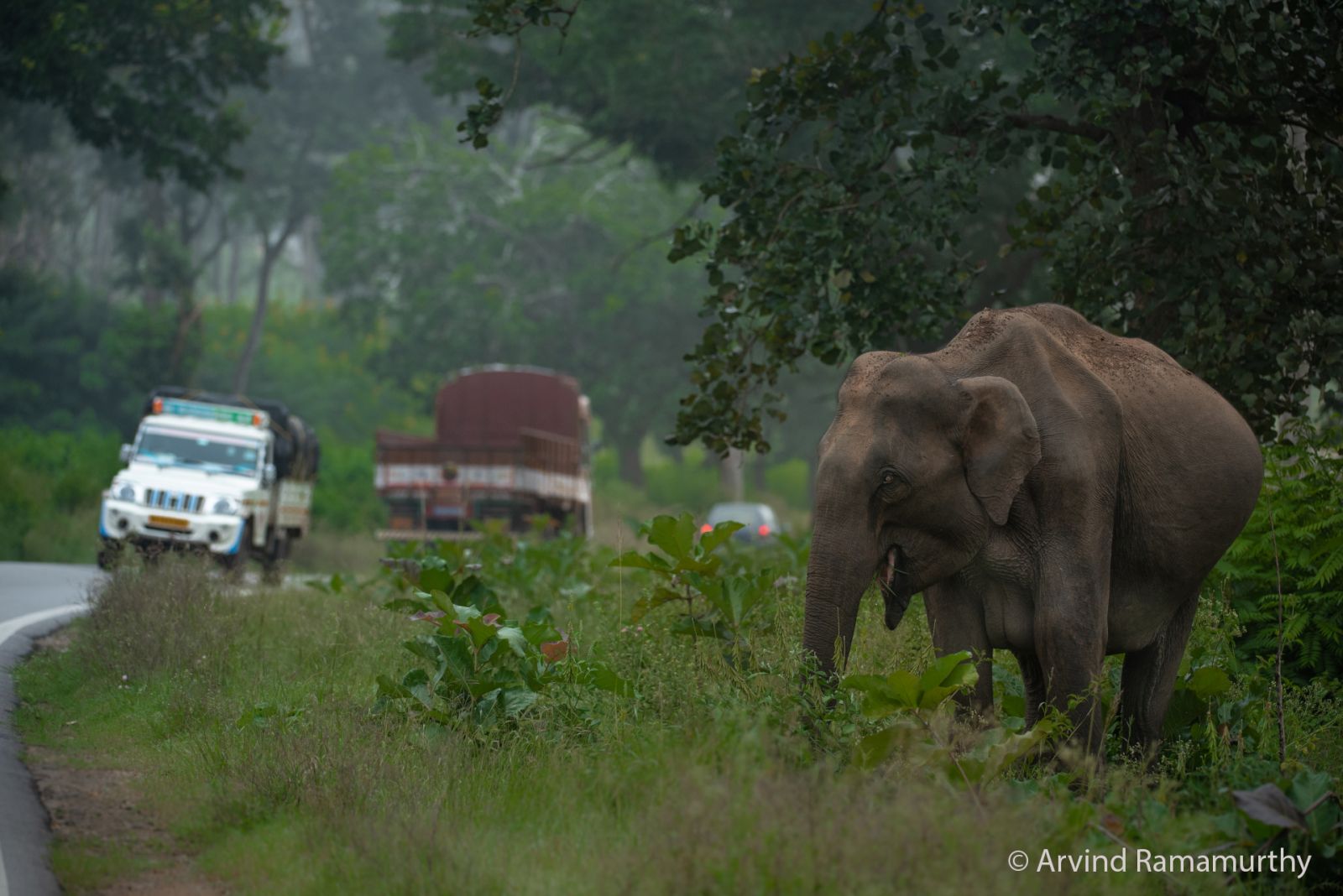 The study found that 70 per cent of the protected areas in India that were investigated had linear infrastructure passing through them. Photo by: Arvind Ramamurthy

In this study, scientists examined the spatial arrangement and characteristics of forest patches in India. They developed a forest cover layer by using NRSA Bhuvan land-use land-cover map and overlaid infrastructure layers (major roads, railway lines, power lines, canals, mines, and reservoirs) to extract information on characteristics of these forest patches. They studied sizes of forest patches, amount of perforation within these patches, and distance between two adjacent forest patches. Using all this information, they categorised each patch into one of the three forest categories: large and less isolated, intermediate-size and less isolated, and small and isolated. This helped in understanding the impact of existing infrastructure on forested habitats. Large and intact/less isolated patches are likely to support greater biodiversity, greater gene-pool and facilitate the movement of wild animals across, and hence, should be protected and future projects should be avoided through these patches. The presence of infrastructure creates a ripple effect in the forest. The authors find that 70 per cent of the protected areas in India that were investigated in this study had linear infrastructure passing through them. Among other linear infrastructures in the forest, â€‹power-transmission lines and roadsâ€‹ were found to be the most common. The study pointed towards a â€‹71.5 per cent reduction in the number of large forest patchesâ€‹. Comparing two ecologically valuable regions Central India and Western Ghats, they found that Central India has more number of large patches (> 1,000 kmâ€‹2â€‹) than the Western Ghats. However, patches in Central India are more isolated than patches in the Western Ghats.

“â€‹This publication is the first in a series of papers from a collaborative project supported by Science for Nature and People Partnership. Our findings are deeply worrying - most forested areas in India are directly impacted by infrastructure with numerous small patches which will impede the movement of wildlife and challenge biodiversity conservation efforts. These fragmented and isolated patches can serve as outbreak hotspots from which diseases such as Covid-19 can emerge, and enhance transmission between people and wildlife. Our analysis for the Western Ghats and Central India needs to be extended to other valuable ecological areas in Indiaâ€‹,” says Dr. Krithi K. Karanth, Chief Conservation Scientist at CWS.

This study provides crucial information to decide ‘â€‹whereâ€‹’ and â€‹‘â€‹howâ€‹’ future infrastructure development activities should be undertakenâ€‹, with the optimalâ€‹ balance of development and biodiversity-conservationâ€‹. The scientists believe that the approach presented here could assist other developing countries, witnessing a rapid infrastructure expansion comparable to that of India, to smartly align development with conservation objectives and thus, potentially presenting a win-win scenario. Policymakers, planners, local scientists, conservationists, activists and students can visualise the patches, and assess the possible impact of upcoming/planned projects on these patches.