The campaign to save Arunachal Pradesh' Pakke Tiger Reserve
A proposal to construct a 50 km. long road through the heart of the Pakke Tiger Reserve has met with stiff opposition from the indigenous Nyishi community and concerned citizens from across the globe.
In late February 2020, a collective of Indian wildlife conservationists, researchers and associated professionals submitted a letter of opposition to the Secretary, Ministry of Environment, Forest and Climate Change. The letter, signed by 90 individuals, is appended here.
Subsequent to the submission of this letter, and local protests against the project, Chief Minister Pema Khandu ordered a review of the proposal. Sanctuary urges CM Khandu to permanently halt the project and protect Pakke's stunning biodiversity for posterity.
The letter details the issues with the project and offers alternate solutions:
To
The Secretary,
Shri C.K Mishra
MoEF & CC
Indira Paryavaran Bhavan
Jorbagh Road, New Delhi - 110 003
24 February 2020

We are a group of scientists and allied professionals who have undertaken research on the biodiversity of the Pakke Wildlife Sanctuary and Tiger Reserve and/or been involved in various conservation initiatives in and around the Pakke Tiger Reserve.

We write to you with regarding a proposal to construct a new road through the Pakke Tiger Reserve, Arunachal Pradesh (from Seijosa, Pakke Kessang district to Bhalukpong, West Kameng district) as part of the East-West Industrial Corridor project in Arunachal Pradesh.

We request you that any plans for a proposed road may please be realigned such that no road/highway is constructed through the Pakke Tiger Reserve, as it would be highly detrimental to the future of this Sanctuary/Tiger Reserve and cause destruction of a highly important forest habitat, and lead to fragmentation of an intact ecosystem.

Having worked in Arunachal Pradesh, we support the need for better road connectivity for people living in many areas across the state. However, in this case, there is great opportunity to prevent environmental destruction and make the road more socially meaningful by realigning it, since there are no villages/towns along the stretch of the proposed road that would pass through Pakke Tiger Reserve. In fact, there are existing alternate roads to reach Seijosa and Bhalukpong via other routes in Assam/Arunachal. The existing route from Seijosa to Bhalukpong via Assam is around 74 km via Balipara with further short-cuts. The estimated length of the new road (proposed as an elevated corridor) through Pakke TR would be 48.8 km. The necessity of such a massive construction effort that would involve huge expenditure to save 25 km of distance seems excessive especially when no unconnected villages would get connected, and the cost to the environment and biodiversity is excessively high.

If the East-West corridor seeks to connect areas by road that lies entirely within Arunachal Pradesh, there are at least two alternate routes that are possible, which would lower environmental damage. In the interest of minimizing disturbance and negative impacts on wildlife/forests in a Wildlife Sanctuary and Tiger Reserve, which is one the most effectively managed Protected Areas (PAs) in Arunachal Pradesh, we request that such options be considered with all seriousness.

Indeed, a circular (RW-NH-11013/02/2019 S&R (P&B)) dated 29 May 2019 issued by the Ministry of Road Transport and Highways, Government of India states that “alignment of NH passing through natural areas may have wide ranging and complex impact on ecology & wild species. To have minimum impact of highways on the protected eco-sensitive area, the implementing agency should consider to spare sanctuaries / National Parks at the planning stage and wherever possible take a bypass/detour.” It underscores the need to avoid PAs and that alternate routes should be identified even if they are longer (Annexure 1).

Building of roads through designated and protected wildlife areas have multiple short-term and long-term detrimental effects on wildlife that have been well-documented both nationally and globally.

As stated in the “Guidelines for Linear Infrastructure intrusions in natural areas: roads and powerlines”, the principle of prevention needs to be followed by avoiding linear intrusions in major Protected Areas and critical wildlife/tiger habitats.

We quote from the guidelines that state: “This Primacy of Prevention Principle recognises that linear intrusions have a range of immediate and long-term deleterious effects, both ecological and social, in natural areas of high ecological, amenity, and livelihood values, and suggests that in virtually all cases, intelligent and sustainable alternatives can be found that are socially and ecologically more appropriate.”

A recommendation was also given by a sub-committee of the Standing Committee of the National Board for Wildlife that set up to formulate ‘Guidelines on Roads in Protected Areas’ in a letter (vide. letter no. 6-62/2013/WL) dated 22 December 2014 that “New roads shall not be proposed inside National Parks and Wildlife Sanctuaries”. This recommendation was communicated to the Principal Secretary (Forests) of all States and Union Territories by the Deputy Inspector General of Forests (Wildlife), Ministry of Environment & Forests and Climate Change (Annexure 2).

Section 38V(4)(i) and 38V(ii) of the Wildlife Protection Act, 1972 provide that core or critical tiger habitat areas must be kept inviolate for the purposes of tiger conservation.

Further, the Supreme Court in the matter of State of Kerala v. L. Srinivas Babu and Ors. dated 7.08.2019 has stated that Tiger Reserves must be kept inviolate and have directed the MoEFCC the strengthen the alternative route, and that the road passing through Bandipur National Park and Tiger Reserve must be shut down in the long run. 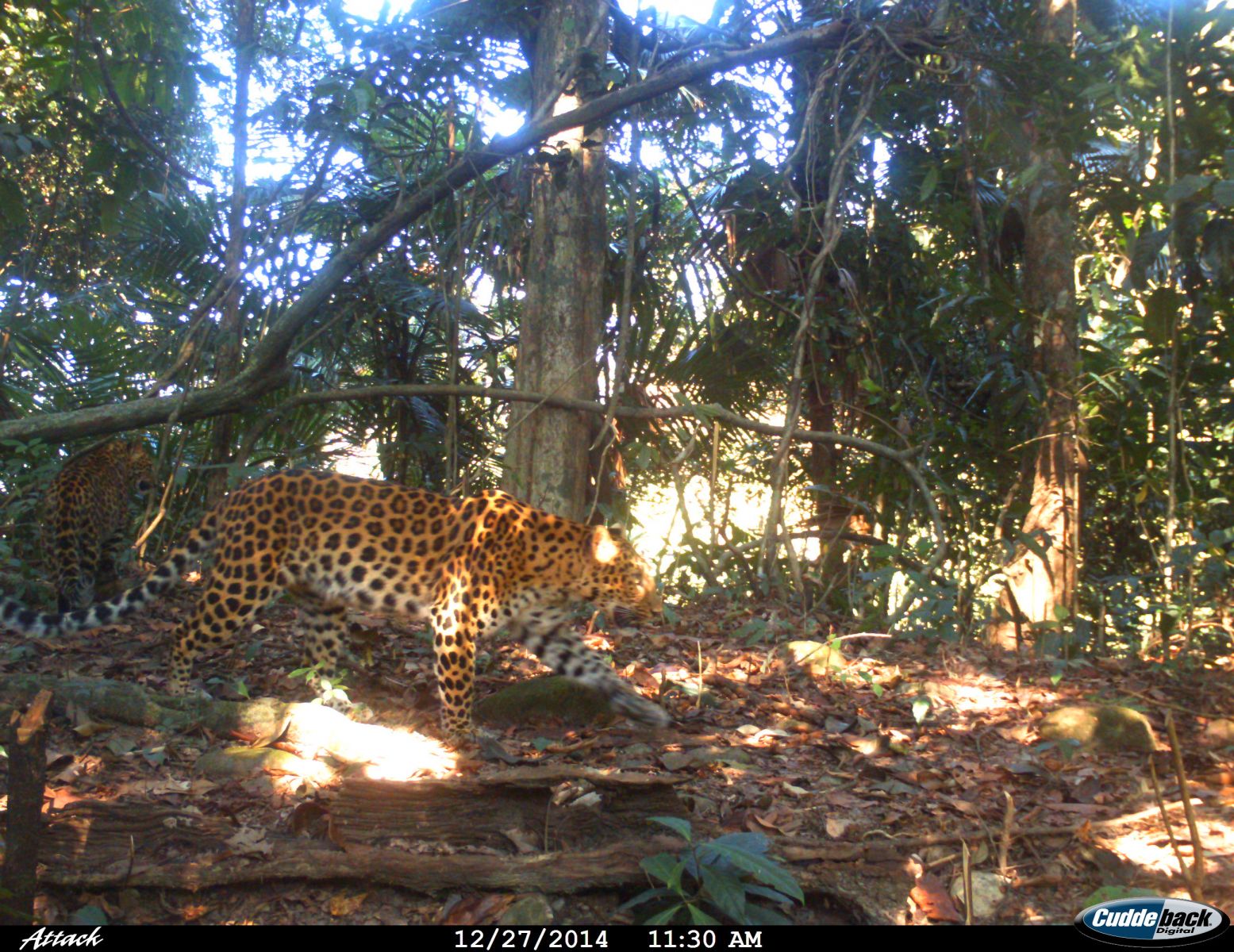 Roads are a severe threat to tropical forests such as Pakke and their biodiversity. Not only do roads cause direct forest loss from clear-felling, their impacts on biodiversity also appear to be particularly acute because most plant and animal species are specialized to forest-interior and understorey microhabitats. Roads also create conditions that alter the nature of biotic interactions, for instance favouring weed invasions and increase predation risk for understorey birds. Vehicular traffic on roads cutting through forest habitats results in road-kills of various amphibian, reptile, bird and mammal species. In addition, roads play a key role in opening inaccessible forest areas to hunters, which exacerbate wildlife declines. Increased access to remote areas that result from new road networks also encourage the expansion of illegal logging, mining and encroachment. Specifically, with respect to Pakke, with over 3 months of annual rainfall (average 2500 mm), floods and topography are key players in landscape change, slope stability and ecosystem productivity of this landscape. If the slopes (stabilized by primary mature old-growth forest) are disturbed it could even compromise long-term recovery of the road slopes and river banks from erosion.

One of the main impacts in this area that would be of serious concern is the increased human access and presence, the constant vehicular movement and the need for continuous road repair and maintenance work in this heavy rainfall and landslide-prone terrain. The road would result in severe damage to wildlife habitat, potential loss of trees/other forest resources due to illegal timber felling/extraction, and loss of animals due to poaching and long-term detrimental consequences related to human access and presence.

It would be difficult for the Forest Department to manage the area as there will be regular movement of people/vehicles through the Tiger Reserve as it will become a public thoroughfare open to all. Pakke’s boundaries are marked by rivers on all sides and a bridge over the Pakke and Kameng rivers would increase access into the Tiger Reserve. In the long-term, this would result in clearing and disturbance of areas in the Tiger Reserve.

Additionally, the Nameri TR in adjoining Assam state shares its border with Pakke TR all along the southern boundary. The proposed road would run along this boundary and would negatively affect Nameri TR area too. Both have been designated as Critical Tiger Habitats and there are important elephant corridors in the adjacent areas. The proposed road would fragment this contiguous forest patch that exists across Assam-Arunachal Pradesh. 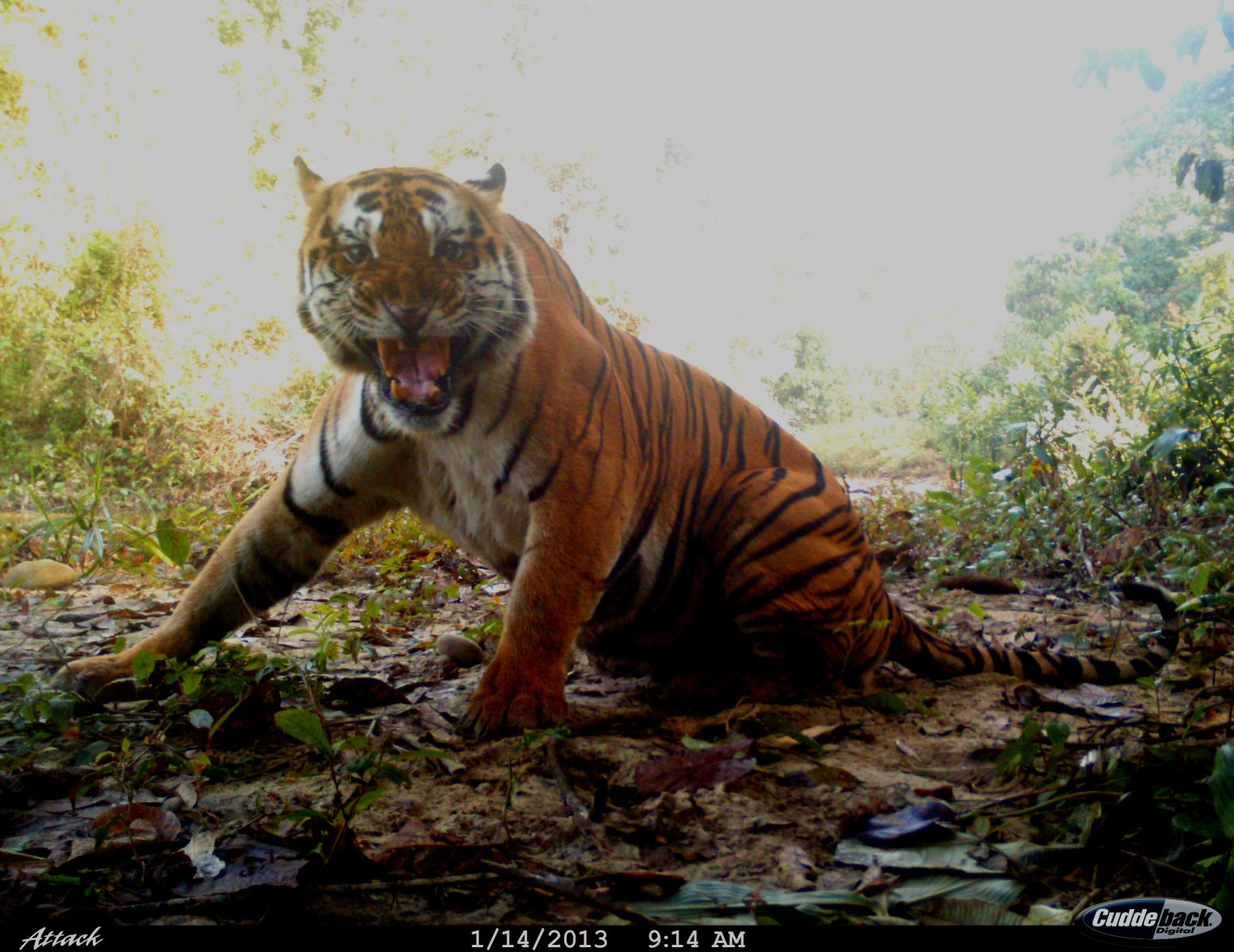 Pakke Tiger Reserve (PTR), a tropical forest in the Himalayan foothills is an important area both regionally, nationally and globally for its high biodiversity value. Pakke TR (862 km2; 26°54′–27°16′N, 92°36′–93°09′E) is part of the Indo-Burma global biodiversity hotspot. It is an important part of the Kameng Elephant Reserve. A total of 343 woody species of flowering plants have been recorded, but at least 1500 species of vascular plants are expected to be found here. Several tree species and other plants are threatened, while some are endemic.

Pakke TR has 59 documented mammal species (excluding bats and terrestrial rodents). Over 100 mammal species are expected or known from Pakke TR. Most of the species found in Pakke TR are listed in the Wildlife Protection Act (1972), with many listed in Schedule 1. Camera trap photographs in the existing area where the road is proposed shows the presence of several endangered and vulnerable mammal species. Tiger, hog deer, Asian elephant, and the Chinese pangolin which are listed as Endangered (IUCN Red List) are present and been recorded/photographed from around these areas. There are also Vulnerable species such as: clouded leopard, marbled cat, Himalayan black bear, gaur, sambar, capped langur, slow loris, binturong, Oriental small-clawed otter and smooth-coated otter. There is reported segregation of two subspecies of the capped langur that both occur north of the Brahmaputra. These two subspecies are separated in the lower reaches by the Jia Bhoreli - Kameng rivers with Trachypithecus pileatus tenebricus in the west and T. p. brahma in the east. This may get affected by building a bridge over the river. 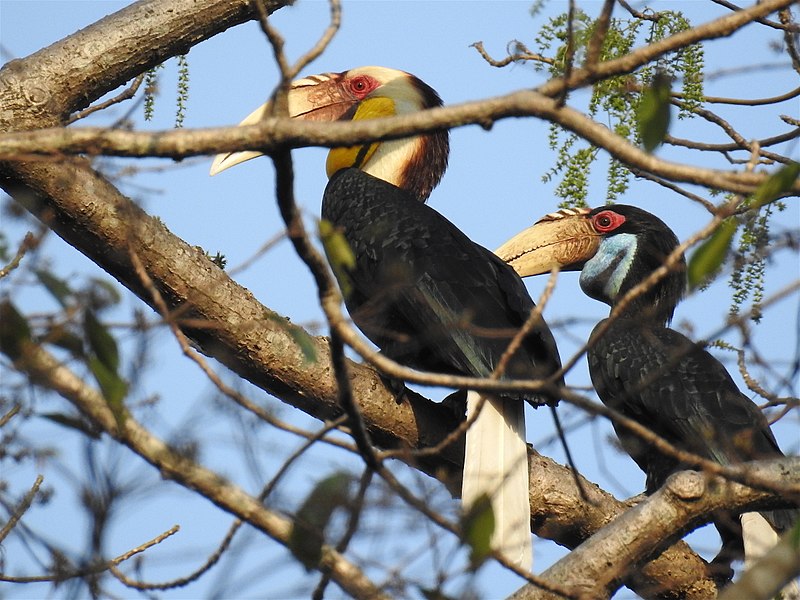 A pair of adult Wreathed Hornbills inside Pakke Tiger Reserve, one of the four species of hornbills found here. Over 300 species of birds have been recorded in these forests. Photo courtesy: Wikimedia commons/ Aparajita Datta.

There are over 300 bird species recorded from Pakke TR including the globally endangered white-winged wood duck, the ibisbill and the Oriental bay owl, which are found within the limits of the road expansion area. Pakke TR is a stronghold for four species of hornbills (Great Hornbill, Wreathed Hornbill, Oriental Pied Hornbill and Rufous-necked Hornbill. Numerous nesting trees of hornbill species are found in the lowland areas in the area where the new road is being proposed. Three of these species (Great Hornbill, Wreathed Hornbill and the Rufous-necked Hornbill) are listed as Vulnerable by the IUCN.

A high diversity of invertebrate, amphibian and reptile species occur in Pakke TR. More than 380 species of butterflies are recorded from Pakke Tiger Reserve of which 70 species are listed in the various Schedules of the Wildlife Protection Act (1972). Arhopala belphoebe was re-discovered from Bhalukpong Ghat in 2014. This species was previously only recorded from Manipur in 1954. It has subsequently also been recorded at Denai in Pakke Tiger Reserve which falls along the area of the proposed road. In addition, Calinaga arborica was re-discovered in Pakke Tiger Reserve in 2015, representing only the second record of this species after its original description in 1915 by Tytler.

Given this context, road building within the tiger reserve will negatively affect forest cover and biodiversity. It will severely affect the effectiveness of the natural barriers due to the river, topography and terrain in minimizing poaching and logging. We urge you to ensure that no such road/highway should be constructed through the Pakke Tiger Reserve, as it will threaten the fate of a globally important tiger reserve in an irreversible way.

Thank you for your kind attention.