A plan put forth by the Chhattisgarh Forest Department to control human-elephant conflict in the state has met with heavy criticism from wildlife experts. The department proposes to purchase paddy from the state, and dump it outside vulnerable villages for wild elephants to feed on. Their rationale is that providing paddy to the elephants will prevent them from entering villages and fields. Chhattisgarh has a high rate of human-elephant conflict, with multiple fatalities reported every month. According to government records, 204 human deaths have been caused by wild elephants in the state in the past three years alone. This is apart from over 66,000 cases of crop damage and over 5,000 cases of property damage in the same time period.

The strategy outlined by the department appears to have no scientific basis, and can potentially aggravate the issue. Award-winning senior scientist M. Ananda Kumar of Nature Conservation Foundation–India completed a PhD in human-elephant conflict, and has implemented impactful conflict mitigation projects in the Western Ghats. Speaking to Sanctuary, Dr. Kumar said:

“It is a futile exercise because conflict mitigation and supplying food to elephants are not connected. This will affect the natural behaviour of elephants, lead to their habituation and they will lose their fear of people. This can increase conflict in the near future. Providing food to elephants may also influence their population. The conflict then may grow if elephant populations increase but suitable habitat remains elusive. We are already struggling to deal with conflict situations across the country, and such steps will only aggravate negative interactions. The state government needs to take proactive steps that are based on scientific investigations into the drivers of conflict, and understanding the needs of the people and elephants. Only then can we deal effectively with human-elephant conflict. The state’s priority should be the protection of forests, including stopping mining and halting the displacement of both people and wild animals.”

The paddy procurement plan has also sparked political debate, with opposition leaders accusing the government of using it as a guise under which surplus, rotting paddy will be sold to the Forest Department at inflated prices to cut losses incurred in last year’s paddy procurement. Additionally, this plan goes against the grain of the Wildlife Protection Act, 1972. Member of the State Board for Wildlife (SBWL) Meetu Gupta expressed dismay at the project. Speaking over the phone to Sanctuary, she said:

“The Asian elephant is a Schedule I species and it is explicitly illegal to feed wild animals in this manner. The Forest Department itself has notifications and boards saying so across the country. The state can best display its commitment to elephant conservation by preserving and enhancing wild habitats, such as the proposed Lemru Elephant Reserve, instead of devising such illogical plans. Lemru has been in the pipeline for two decades, but despite approval from the SBWL has not been notified. The reserve falls under the famed Hasdeo Arand forests that are known for their rich coal deposits, and one must wonder whether the delay has something to do with this. ”

Elephants are wide-ranging, herd-living mammals but their habitats are under duress, with 72 of the documented 88 elephant corridors in the country having national highways, roads or railway lines slicing through them. To compound matters, elephant reserves have no legal sanctity and a measly 22 per cent of elephant habitats fall under India’s Protected Area network. Consequently, there has been a tragic rise in human-elephant conflict, and mitigation measures have, for the most part, been kneejerk reactions – unscientific and inadequate. 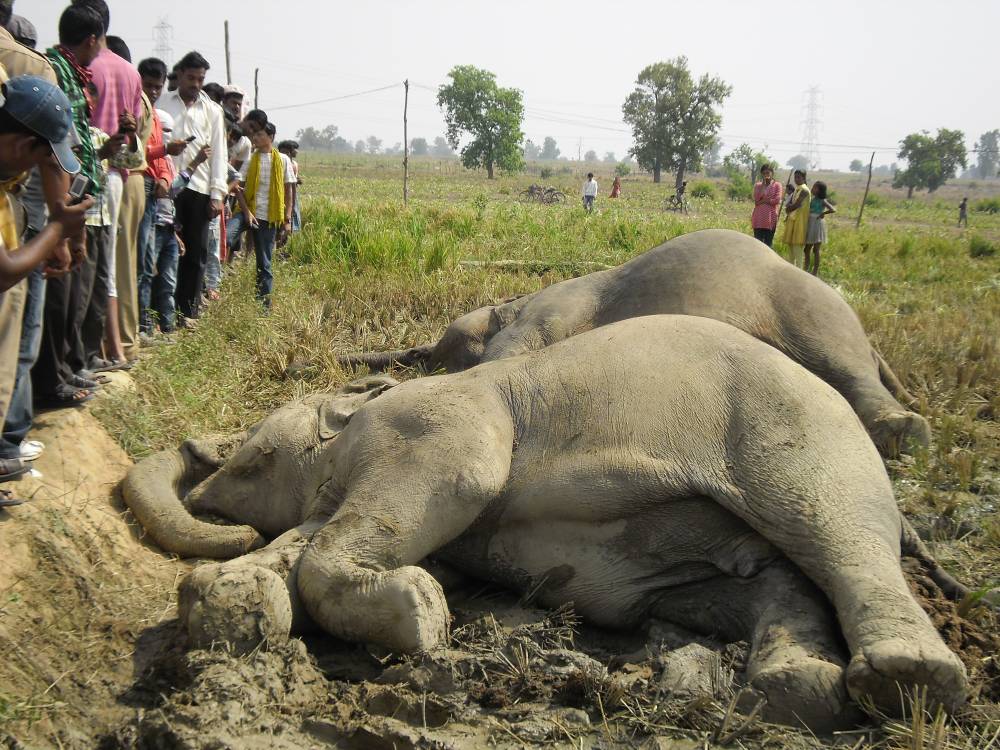 Two elephants were found dead due to electrocution in Samarpudga village in 2012. Between 2014-2019, as many as 490 pachyderms died of unnatural deaths, of which 333 were on account of electrocution. Photo courtesy: Sajal Madhu.

Sanctuary has been ringing an alarm on the escalating situation in Chhattisgarh for several years. In a 2018 letter to the Ministry of Environment and Forest, Sanctuary highlighted the “utterly inadequate response to the issue in the state of Chhattisgarh where human-elephant conflict has escalated to a devastating degree”. The letter also said, “Scientific initiatives to mitigate conflict, large scale public awareness programmes, voluntary relocation of vulnerable hamlets, media sensitisation workshops and habitat protection and restoration are the need of the hour. It is no secret that the forests of the state have been ravaged by coal mining conglomerates, and in fact, it was reported that the proposed Elephant Reserve of Lemru was never notified in order to keep it open for coal exploration.”

Chhattisgarh-based activist Sajal Madhu, who has previously received support from Sanctuary’s Mud on Boots Project, has consistently highlighted the agony of both human communities and wild elephants that live in the eye of the storm. He says, “Conflict incidents occur almost every day, and the death count continues to rise. We are seeing elephants every evening. This proposed plan will not solve our troubles, and leaves scope for corruption and misappropriation. The Forest Department needs to empathise with the losses faced by local communities and take appropriate steps to keep them safe, while safeguarding the elephants too. We are worried that this plan will create further problems.”

This is not the first time that a state Forest Department has come under fire for inappropriate responses to elephant conflict situations. A Public Interest Litigation filed in the Supreme Court by veteran conservationist Prerna Singh Bindra listed four states as respondents and accused them of “appalling, heart-wrenching acts being undertaken by the Forest Departments…”, going against their “moral and legal mandate to prevent the infliction of unnecessary pain or suffering on animals…”  and for “adopting brutal methods which harm, injure and even kill wild animals in the name of wildlife conservation”. 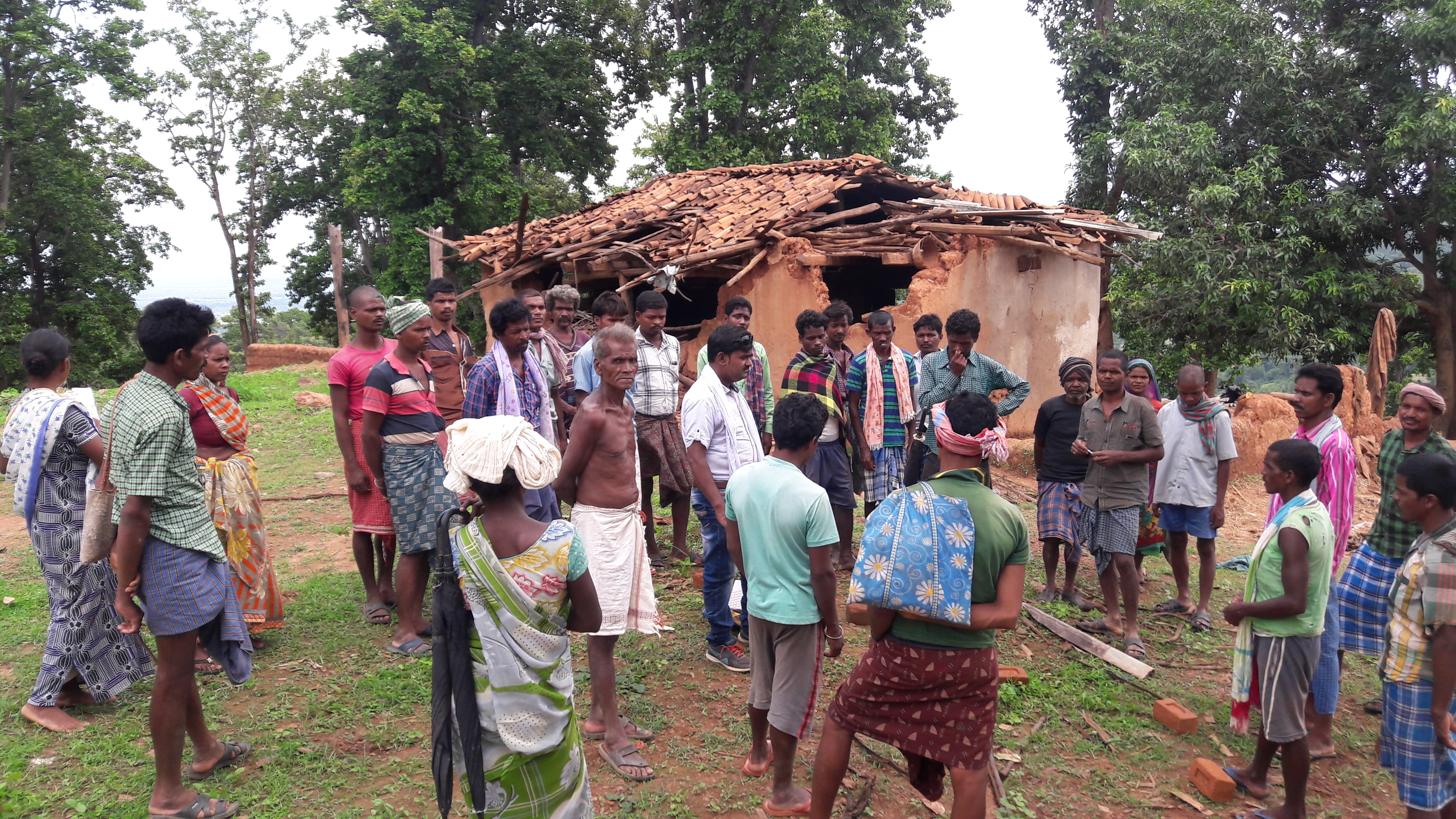 Sajal Madhu has been working relentlessly to record and mitigate human-elephant conflict in Chhattisgarh. Through his voluntary initiative - ‘Hathi Bachao Sangarsh Samiti’ - Madhu helps victims of the conflict file for compensation from the government, runs awareness programmes and liaises with the State Forest Department. Photo courtesy: Sajal Madhu.

In Sanctuary’s view, it is discouraging that state governments develop conservation plans without input from well-qualified, independent scientists. India has no shortage of excellent elephant conservationists, including the Chair of the IUCN Asian Elephant Specialist Group, who may be consulted. Time, resources, and most importantly, lives can be saved if India’s conservationists and scientists are allowed to influence environmental decision-making. The Sanctuary Nature Foundation will be sending emails to the concerned authorities requesting that they reconsider this proposal.