A Thousand Voices From the Field

Satish Shendre heard gunshots in the middle of the night. It was one of his first nights at the camp. A forest guard with Maharashtra’s Special Tiger Protection Force posted at the Pench Tiger Reserve, he was recently assigned additional charge of a beat that abutted the Madhya Pradesh border. The beat had all the problems that a forest guard can worry over: grazing, tree-felling, and poaching of deer and wild pigs with bharmaar bandook, a crude, locally made shotgun that fires a mix of gunpowder and shrapnel. He braced himself for the inevitable, and waited for sunrise. 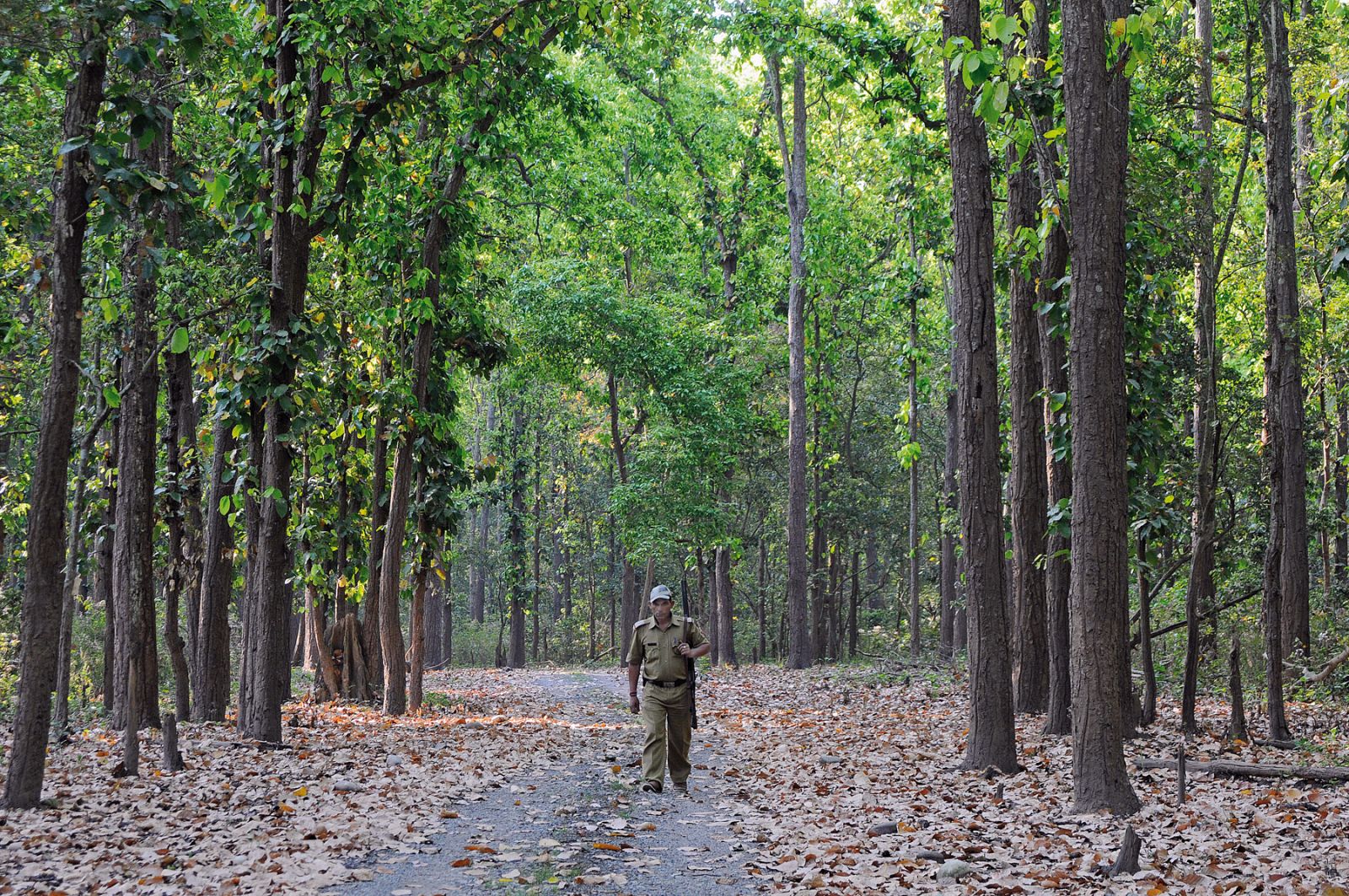 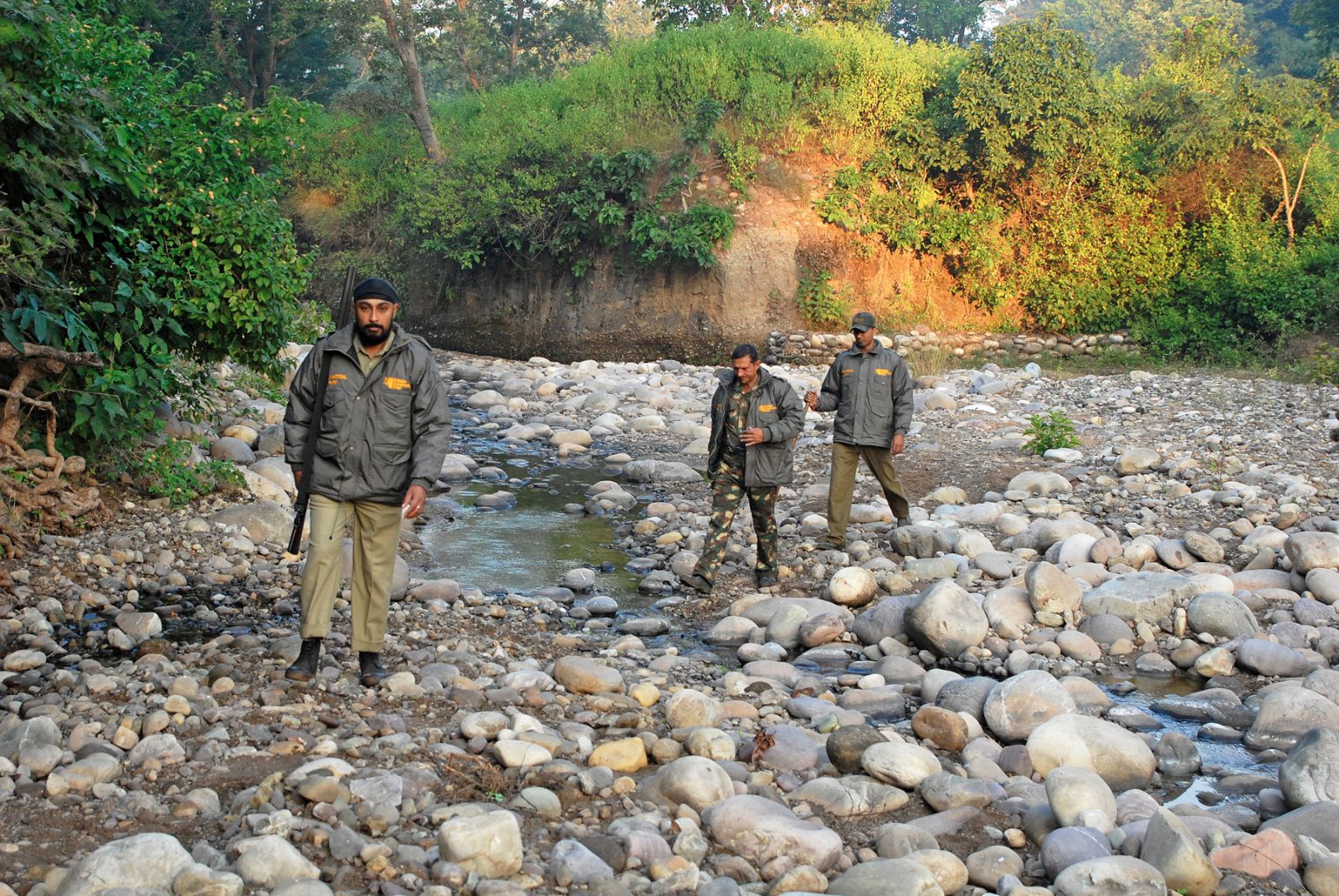 Forest guards at work. This workforce toils endlessly around the clock, often poorly equipped, or trained and little appreciated, to keep our forests and wildlife safe. What we see here is a badly-needed health assessment, so crucial to the effective implementation of their very tough duties. Photo: Dr. Anish Andheria

The next morning, Shendre and his two assistants, the forest watchers assigned to him, headed in the direction of the state border. Walking a narrow forest-trail, they heard a gunshot again. They followed the trail of the sound, and came face-to-face with two men, each carrying a gun. His assistants started closing in on them from the sides, while Shendre approached from the centre. The men sprang up and began running. Shendre was about to apprehend the man lagging behind, when the man turned and pointed the gun at him. “I had raised my hands in surrender, yet he fired at me,” he says. A shrapnel pierced his collarbone, and he fell on his side, bleeding.

No vehicle could have reached the spot, as it was down a valley. The watchers informed the nearest Round Office on the wireless system, and started carrying him by the shoulders. They clambered up and down the hill for two kilometres to reach the nearest camp. A car then transported Shendre to a dispensary in the nearest town, and then to a hospital in Nagpur, where he received intensive care for 15 days. 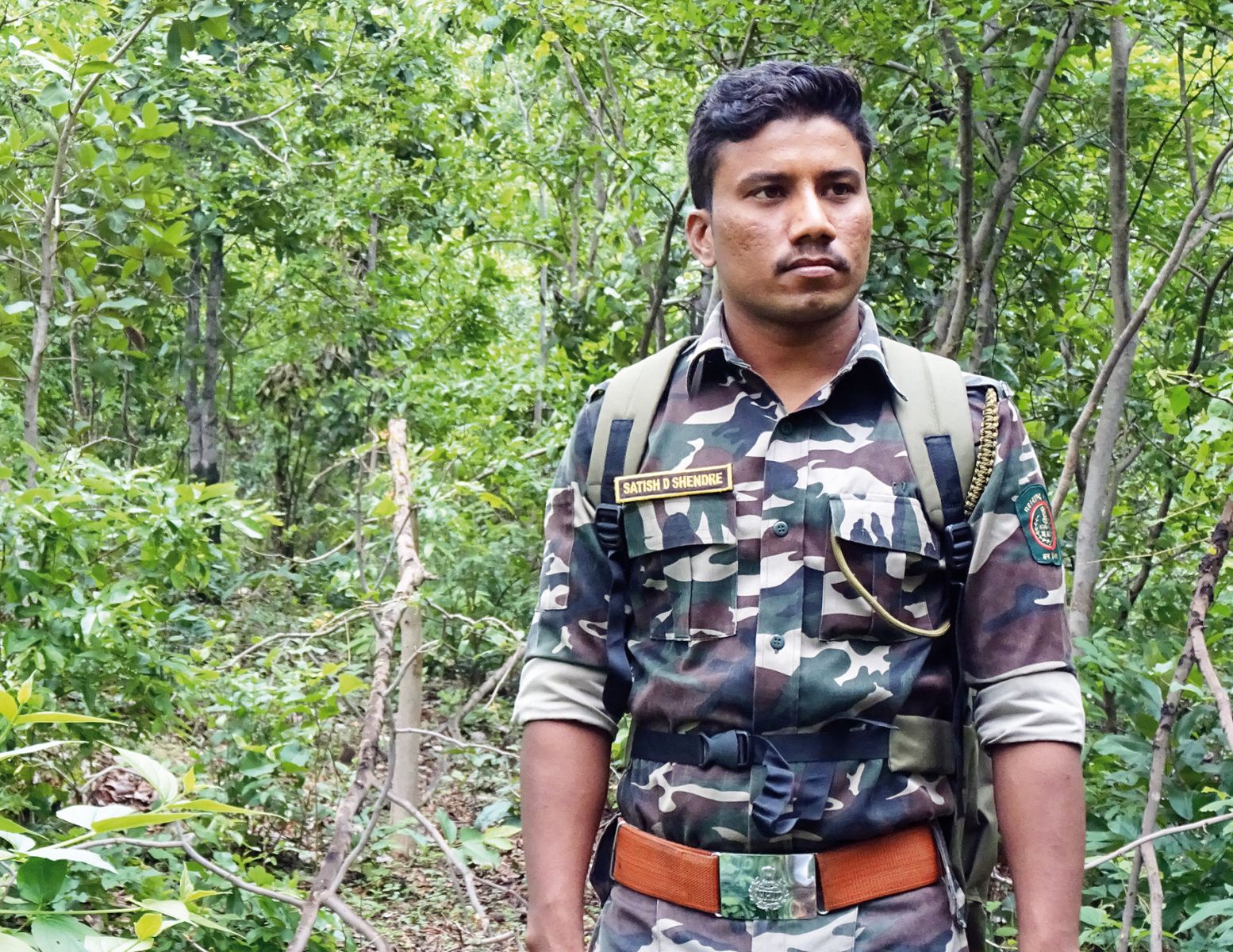 Satish Shendre, a forest guard with Maharashtra’s Special Tiger Protection Force, who survived being shot at by a poacher in 2014. Photo Courtesy: Satish Shendre 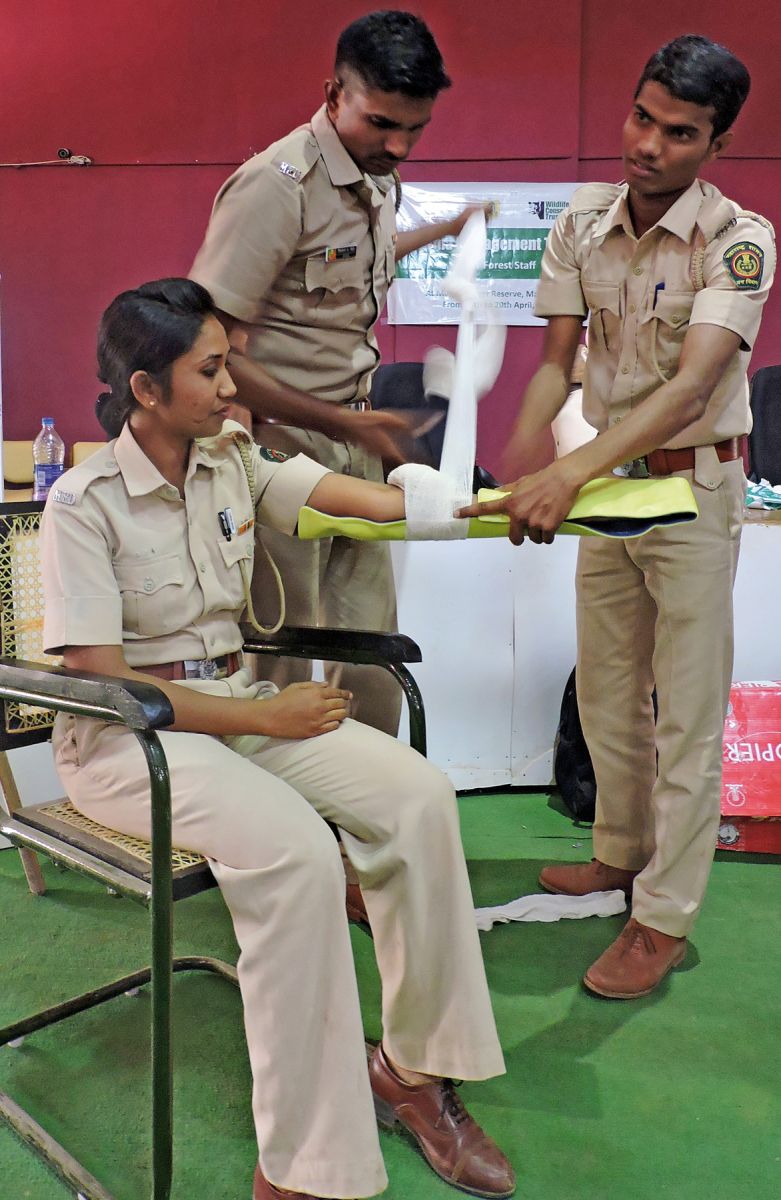 “Shendre was physically fit, so he could walk two kilometres even as he bled,” says his friend Homesh Gahane. Many Indian forest guards don’t survive confrontations with poachers, animal attacks, and other medical emergencies they face at work. India ranks first in on-duty mortality of frontline forest staff. Between 2012 and 2017, India accounted for almost a third (162 of 520) of all ranger (frontline forest staff) deaths, according to the International Ranger Federation. In 2017, of the 100 rangers that died on-duty worldwide, 28 were Indians. These brave men and women, as they set out on foot patrols, put their lives on the line every day; and even after they make the ultimate sacrifice, most remain unsung – their names often appearing in the rolls of honour as ‘Raju, India’, or ‘Unnamed, India’.

A first-of-its-kind health needs assessment of forest guards working in tiger reserves in Central India, conducted by the Wildlife Conservation Trust (WCT) with technical support from the Tulsi Foundation (UK), has thrown light on their exposure to medical emergencies, access to medical equipment and first aid training, and the availability of healthcare facilities. The study is the largest of its kind, and its findings are the fruit of three years of exhaustive field surveys that covered over 1,200 forest guards from 14 tiger reserves across five states.

According to the study, the median distance that forest guards have to travel to seek definitive care (treatment required to conclusively manage a medical condition) for major health emergencies like fits and seizures, serious injuries, animal attacks, poacher assaults, major accidents, heart attacks and cardiac arrests was over 30 km. As many as 32 per cent of the forest guards reported that that they had no access to local medical facilities whatsoever within commuting distance (five kilometres or less). These numbers have inspired WCT to take the next logical step in partnership with the Forest Department – a mapping study of health facilities around tiger reserves in Central India. The exercise will help understand where health infrastructure exists, where it doesn’t, and how existing infrastructure can be supported and strengthened. 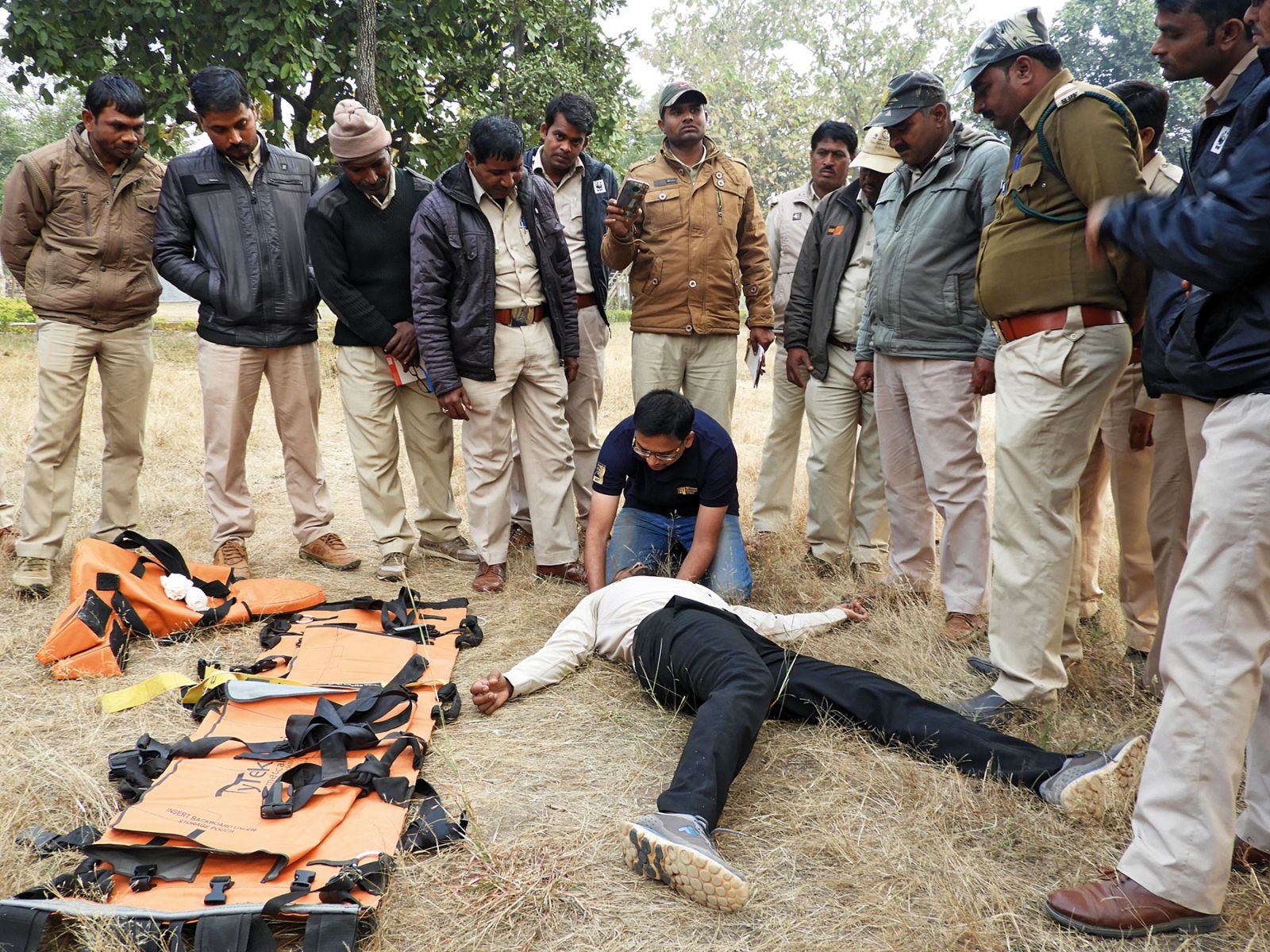 Another worrying revelation was about the lack of first aid equipment. A startling 82 per cent of forest guards revealed that they had no access to medical first aid in the field. Visits to anti-poaching camps also revealed an abysmal lack of first aid items and equipment. While the top three items the guards had access to in the field were simple pain killers (14.5 per cent), bandages (12.8 per cent) and antiseptics (10.9 per cent), very few guards had splints (1.3 per cent), stretchers (0.9 per cent) and thermometers (3.2 per cent).

Dr. Chet Trivedy of the Tulsi Foundation, who serves as WCT’s Chief Medical Officer, says, “Although it might be difficult to equip all forest guards with a full medical kit, basic items such as bandages, dressings and tourniquets, which are life-saving, should be accessible in emergencies. Practical training and educational resources should also be provided, so that they can manage medical emergencies with confidence.

A disappointing 64 per cent of all participants had never received any first aid training. The remainder had received varying degrees of training, from informal to basic and advanced. The importance of training forest guards in first aid and trauma management cannot be overstated. The right skill, or the lack of it, can make all the difference in an emergency situation. In case of a vehicular accident, or a fall from a height, protecting the spine and binding the pelvis while extricating the victim could prevent further injury or death. The technique, called log-rolling, is just one of the many skills imparted to forest guards during the ‘Trauma Management Training’ sessions we held. The training programme was introduced in February 2016. Over 1,200 forest guards from 15 tiger reserves and two wildlife sanctuaries from Central India have thus far been trained in a collaborative effort with Forest Departments. 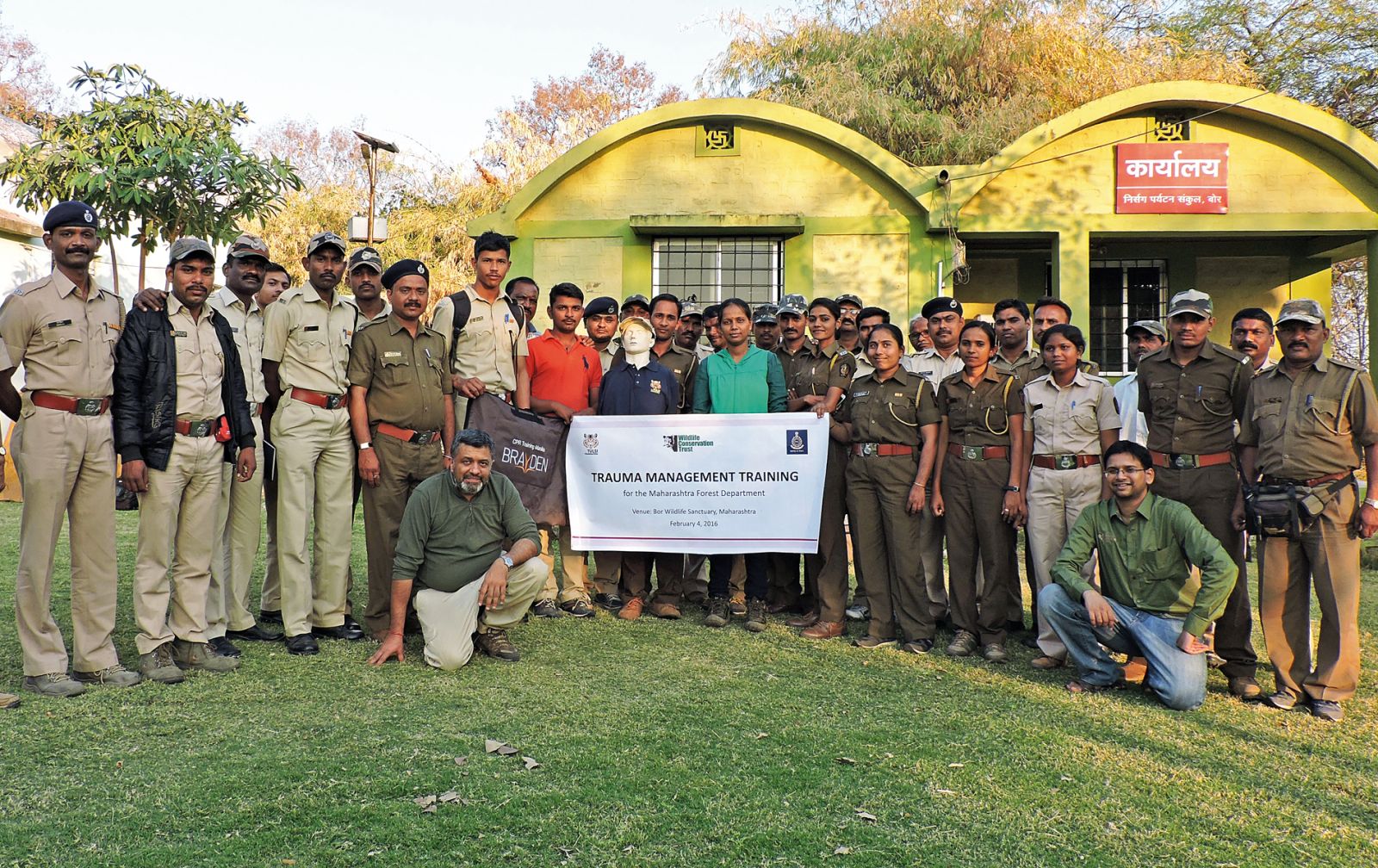 Attendees at a Trauma Management Training programme, held in collaboration with the Tulsi Foundation in February 2016. Photo: Wildlife Conservation Trust

The skills and techniques imparted adhere to the latest pre-hospital care standards. If one considers the management of snakebites, most traditional methods of first aid are either useless, harmful, or even potentially dangerous. While conducting surveys for the study, Dr. Vishal Gadre, Programme Officer with WCT’s Health team, was horrified to learn that an elderly forest guard had chopped off the finger of a snakebite victim, believing that would prevent the venom from spreading. On the other hand, forest staff that have undergone trauma training have been able to help victims in a much safer and scientific manner.

During the monsoon of 2018, Jagdeep Manohare, a data entry operator employed with the Melghat Tiger Reserve, was downloading patrolling tracks on his laptop at one of the field headquarters when a wireless message informed him that a forest watcher had been bitten by a snake nine kilometres away. Manohare had undergone training in trauma management and remembered the first aid treatment for snakebites. He rode his bike through gushing streams and tall grass while it rained, and reached the spot. He immediately calmed the victim and inspected the bite marks near his ankle. The victim’s companion had tied a handkerchief a little above the wound, around the shin, hoping that it would prevent the venom from spreading up his leg. But Manohare had learnt the most effective pressure bandaging method during the training. Improvising with whatever material was available, he made a pressure pad with his own handkerchief, placed it directly on the site of the bite, and wrapped the other handkerchief tightly over it. He then ferried the victim on his bike to a four-wheeler, engaging and reassuring the victim the whole way to prevent him from losing consciousness. The victim was then taken to the nearest hospital, where he was stabilised and discharged soon.

Emergencies like these are not uncommon in the field. Fifty-four per cent of participating forest guards had faced some medical emergency in the field, and 30 per cent had contracted malaria.

Forest guards safeguard our critical natural resources that provide ecosystem services beyond any monetary value. Yet, they have to face safety and health risks that are, to a good extent, abatable with appropriate interventions.

As we celebrate the rise in India’s tiger numbers, a good proportion of which live outside Protected Areas and come in contact with humans, the urgent need is to invest in commitment and resources towards improving the health, safety and work conditions of these brave women and men who protect our natural heritage.