A Chorus, A Census And Other Antidotes To Pessimism

Many years ago, before the turn of the century, I submitted a piece of writing to the editor of a magazine I was working for. He responded with a sticky note: “Lose the background hum of despair.” It was an article about retro-gaming emulation on personal computers.

I don’t know what he read between the lines – perhaps my repressed anxieties as a snake desperately avoiding my tail had somehow bubbled up – but I’ll admit this much: I am not, generally speaking, known for my cheerful disposition. Pensive and broody – that’s more my speed.

Being involved with wildlife conservation, even as someone who merely flits on its fringes, writing about it, gives me ample opportunity to strum the chords of my native melancholy. Especially in the last few years, when each shred of news – on environmental policy, on the state of frontline forest staff, on the rising tide of human-animal conflict – has made me want to shred newspapers with my teeth (or curl up in the foetal position, thumb in mouth).

So, ‘conservation optimism’? From me? At a time when the legal and institutional structures that undergird conservation are being hollowed out by the government of the day?

Why not. After all, nothing engenders perspective quite like a pandemic.

The Voices in the Dark

This time last year, amidst the hush of the nationwide lockdown, even as a major dilution of India’s environmental protection framework was quietly being initiated, I began to hear a chorus of voices.

This wasn’t the usual smattering of disjointed protest-notes in the conservation echo chamber. This was a series of public concerts. I heard the voices of indigenous Idu Mishmi people ring out against the Etalin Hydropower Project that would inundate large parts of the Dibang Valley in Arunachal. I heard Goan citizens assert themselves in opposition to a linear infrastructure expansion that would severely impact Mollem Wildlife Sanctuary. I heard young people from tribal communities speak out against an industrial corridor to be carved through Pakke Tiger Reserve, and a coal mining clearance that would devastate the virgin Dihing Patkai Wildlife Sanctuary.

Accompanying these voices, adding nuance and texture, I heard an orchestra of young conservationists and researchers, filmmakers and writers and illustrators. It was beautiful to behold. The fact that these concerts were (largely) conducted by young women made them doubly delightful – for what gets the authoritarian goat more than a woman who won’t shut up and obey, dammit.

Never mind the fragile nature of whatever successes were achieved, never mind the relentless forces stacked in opposition. To have young people assert themselves as stakeholders in the conservation of wild habitats, to have the government reminded that it is custodian and not owner, even just to stare into the implacable face of power and see it blink – it was a beautiful thing. 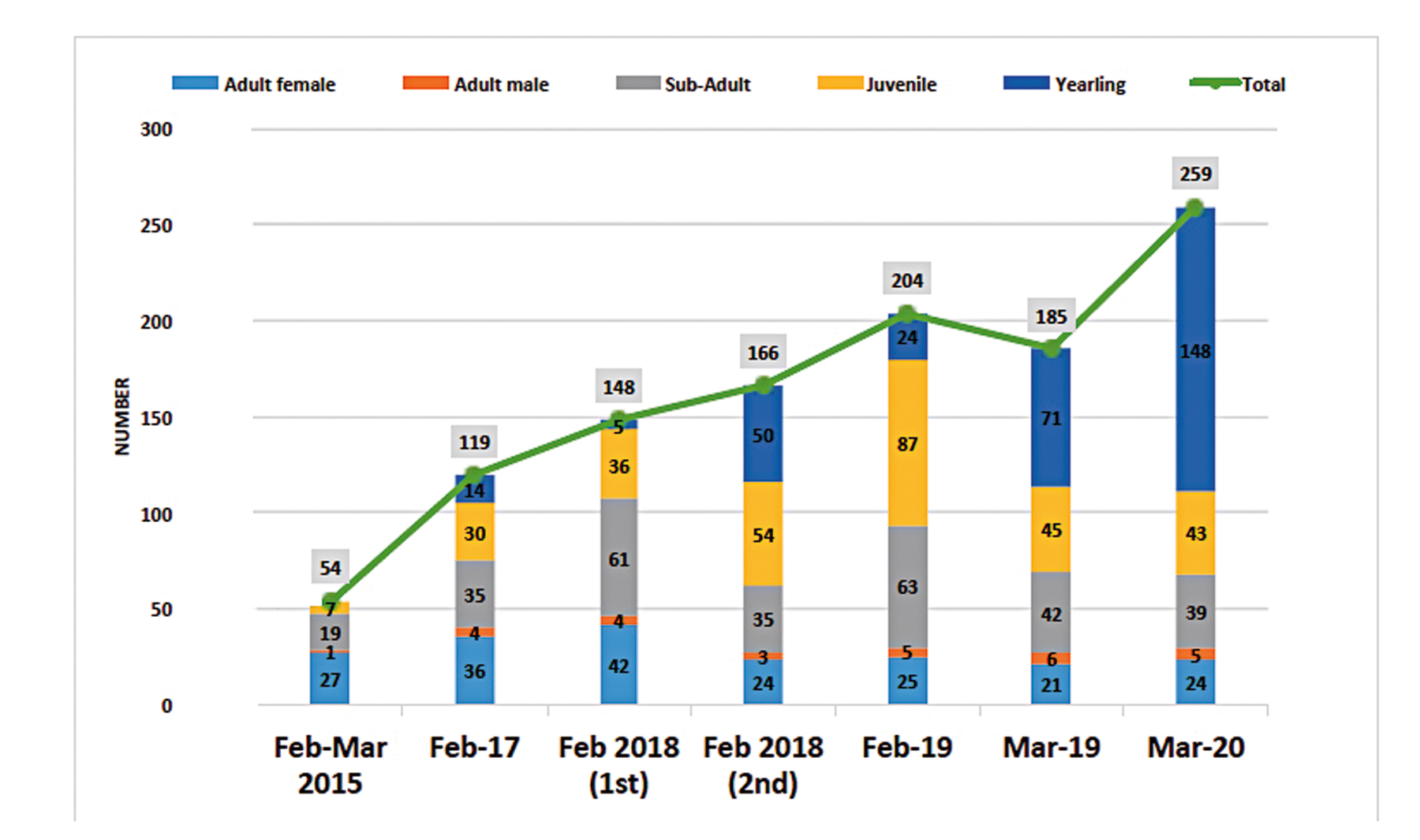 In that tender soil I nourished the roots of my withered optimism last year. In the fact that even at the worst of times, when people were vulnerable and isolated and had every right to think only of their immediate circumstances, they came together in common cause. At the very moment the government sought to undermine public consultative processes, they made sure they were heard. There was no going gently into the good night.

It reminded me of what George Schaller once said. No, not that famous quote about there being no victories in conservation; what he said in the Deccan Chronicle last January, when he addressed the issue of pessimism and lost hope: “I don’t deal with hope, I deal in action.”

Over the last year, even when it was most difficult, no flag of surrender was waved.

Pandemic or not, field teams rescued stranded wildlife during the Kaziranga floods. Mountains were climbed to conduct markhor population surveys in Kashmir. Range Officer Kime Rambia’s men, whom I met on my last field trip before the lockdown, continued to patrol Pakke’s Tippi Range in the face of extraordinary hardship. And on the banks of a quiet blue river in Bihar, fishermen, farmers and a former bahubali (muscleman) helped monitor and protect gharial nests and hatchlings. 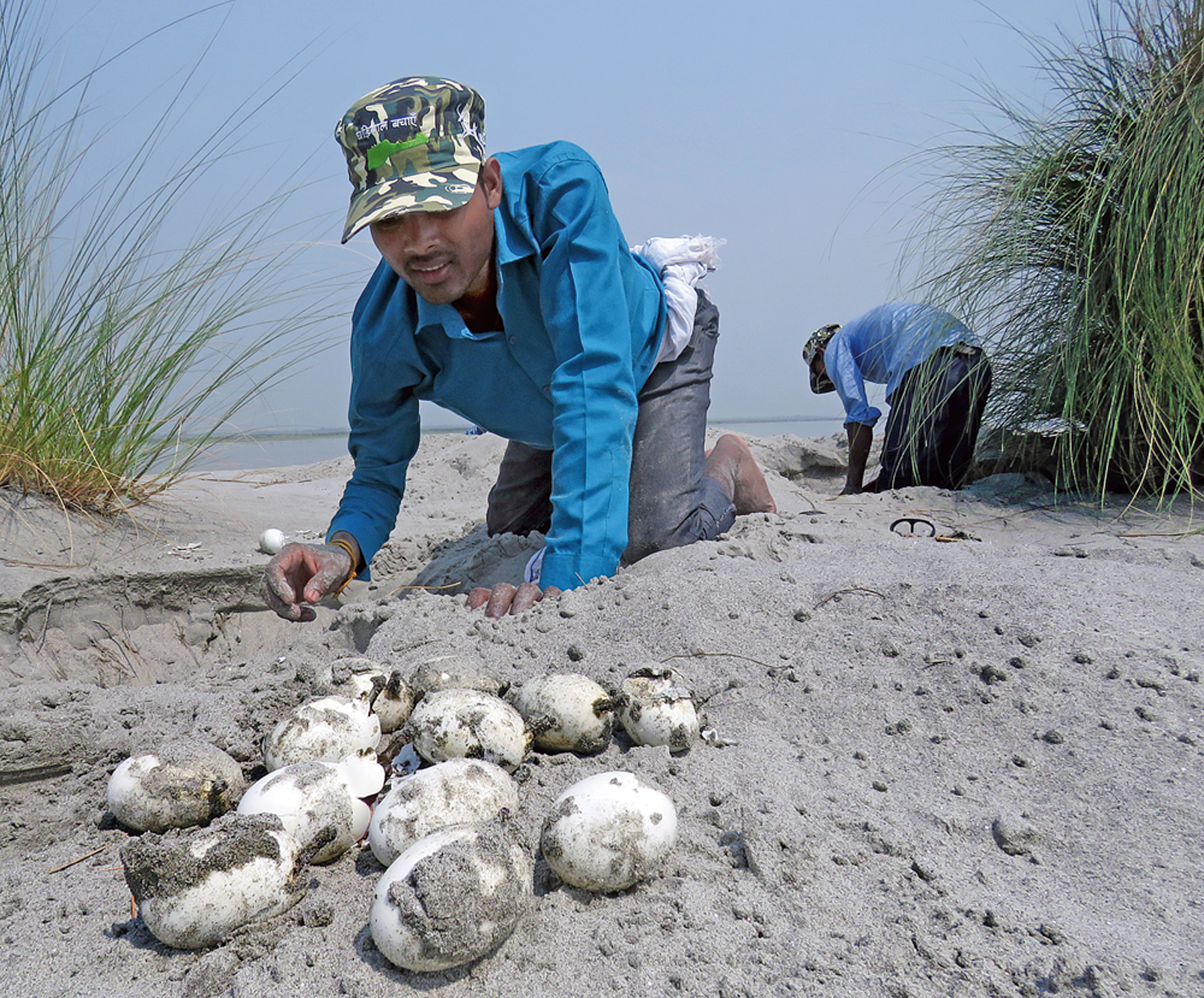 Members of the local farming and fishing communities along the Gandak in Bihar are actively involved in conservation efforts, such as nest monitoring and conducting safe rescues of hatchlings. Photo: Subrat Behera/WTI.

It is February 2021 and I am on an inflatable raft, floating down that quiet blue river: the Gandak. This is my first field trip since the pandemic began.

I am accompanying a four-member survey team from the Gandak Gharial Recovery Project, jointly run by the Bihar government’s Department of Environment, Forest and Climate Change, and conservation NGO Wildlife Trust of India (WTI). Its task: to conduct the latest population census on this river of the gharial, Gavialis gangeticus – Critically Endangered according to the IUCN Species Survival Commission’s 2007 assessment. 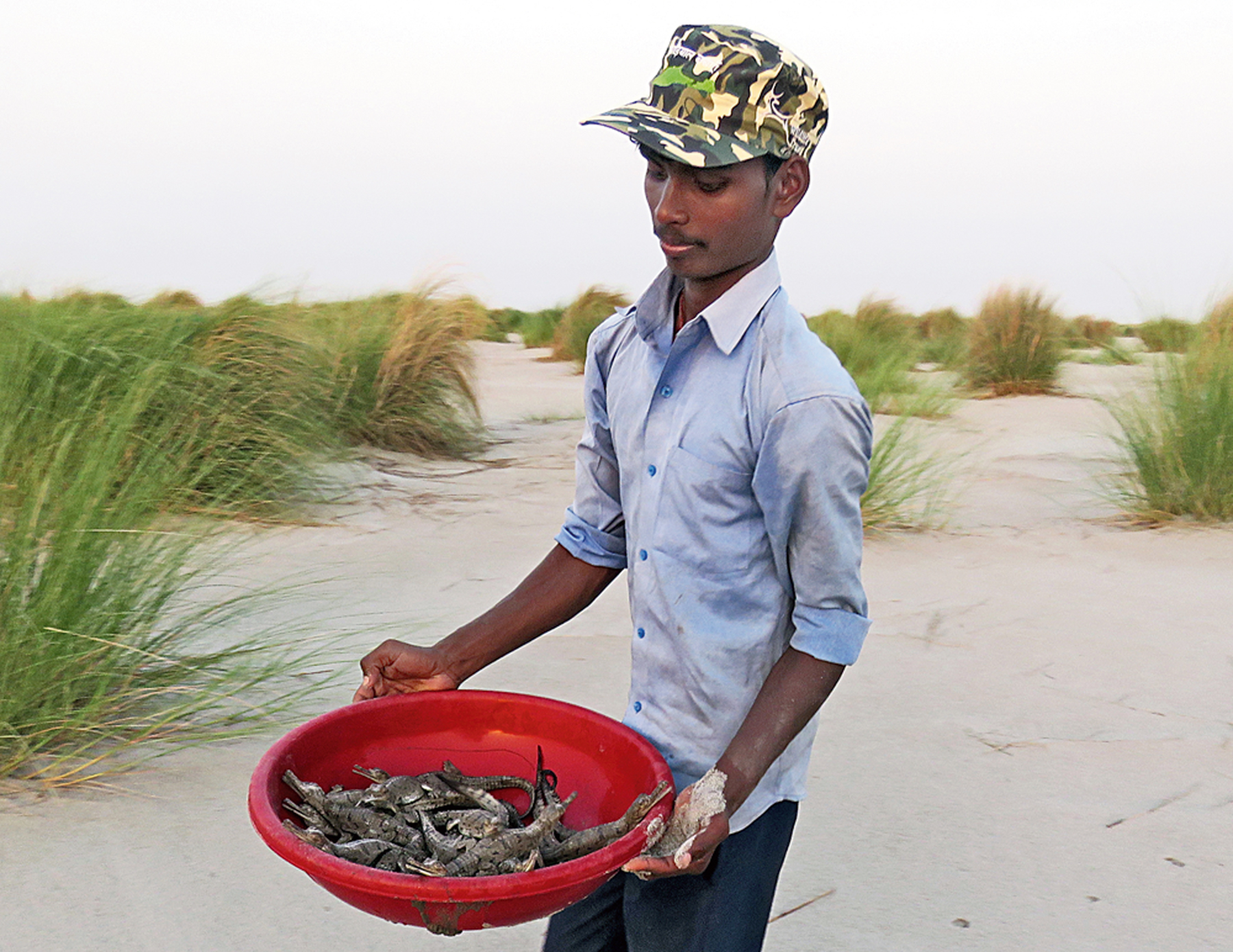 Members of the local farming and fishing communities along the Gandak in Bihar are actively involved in conservation efforts, such as nest monitoring and conducting safe rescues of hatchlings. Photo: Subrat Behera/WTI.

The first systematic survey of the Gandak, conducted in 2010, revealed a remnant wild population of at least 15 gharials. A restocking programme was initiated and in 2014-15, the Bihar Forest Department and WTI released 30 sub-adult gharials, captive-bred at the Sanjay Gandhi Biological Park in Patna, into the river at Valmiki Tiger Reserve. In 2018-19, the Endangered Species Project, Uttar Pradesh Forest and Wildlife Department, and Turtle Survival Alliance released a further 55 sub-adults into the river at Sohagi Barwa Wildlife Sanctuary.

Regular surveys have shown that the Gandak’s gharial population has grown steadily since 2015. The population comprises mostly wild gharials, along with the individuals head-started in India and upstream in Nepal. The IUCN Crocodile Specialist Group Newsletter (July-September 2020) notes that there has been “a significant increase in the proportion of yearlings sighted, from 12 per cent in 2017 to 57 per cent in 2020, indicating successful recruitment within the Gandak river” (and/or the Narayani, as the river is known in Nepal). The March 2020 survey recorded 259 individuals, making this the second largest population in the species’ range. 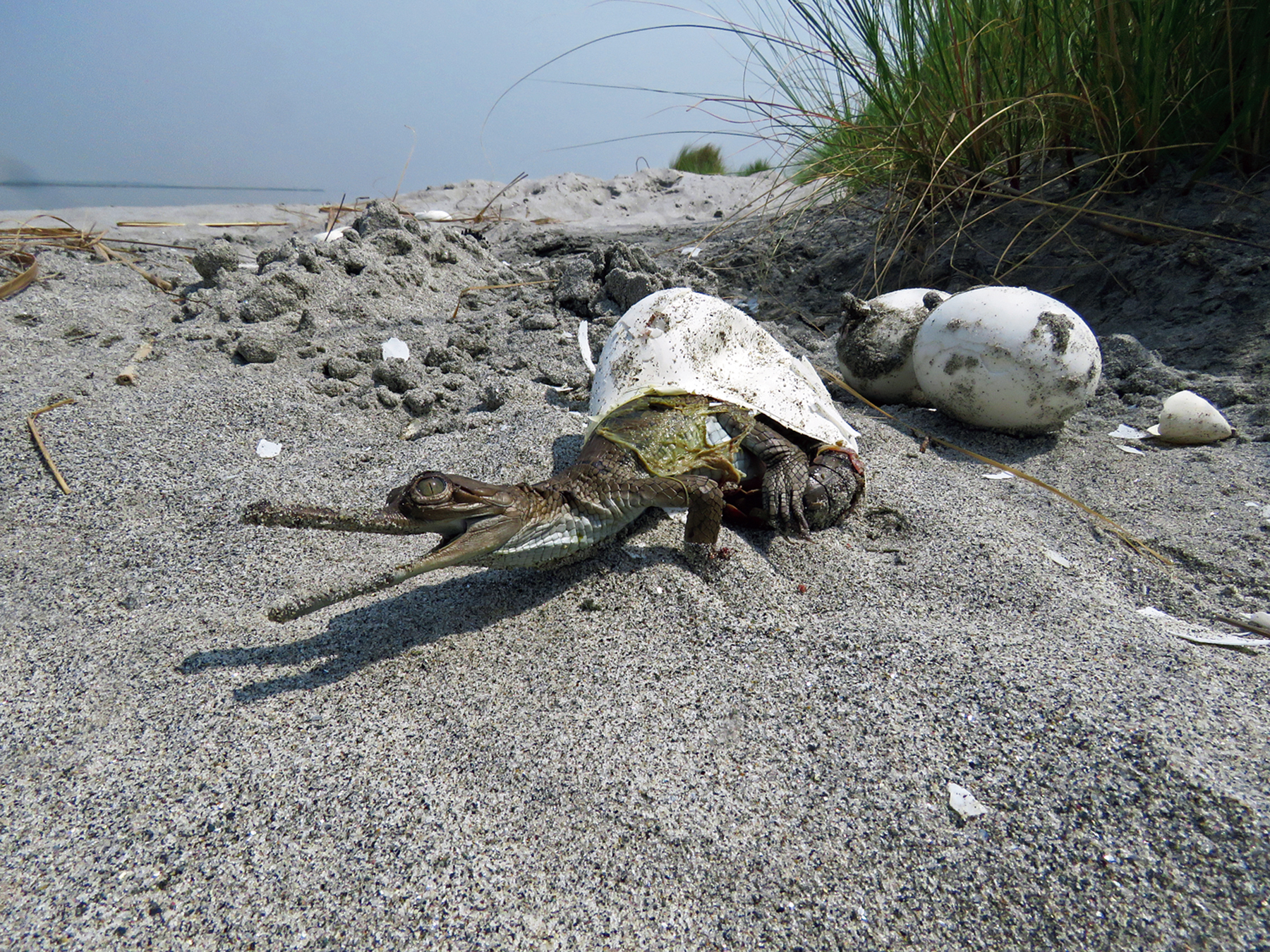 A gharial hatchling emerges from its egg at a nesting site by the Gandak river. Photo: Subrat Behera/WTI.

The annual surveys are conducted from the Valmikinagar Barrage to the Ganga confluence at Sonpur, about 320 km. downstream. This distance is divided into bite-sized, two-kilometre segments. When a gharial is sighted, wildlife biologist Subrat Kumar Behera, who is leading the current survey, photographs it and records the river segment, sighting number, time and GPS location, water depth, basking site substratum and any anthropogenic threats in the vicinity. The gharial’s length is estimated – gharials are classified as hatchlings, yearlings, juveniles, sub-adults and adults based on their total length – and the photograph file number noted alongside.

A slow, meticulous course is maintained, necessitated in part by the gharials’ skittishness (an ill-timed rake of a paddle and they melt into the water before camera can be raised or pen put to paper), in part by the Gandak’s whimsical meander through its megafan. 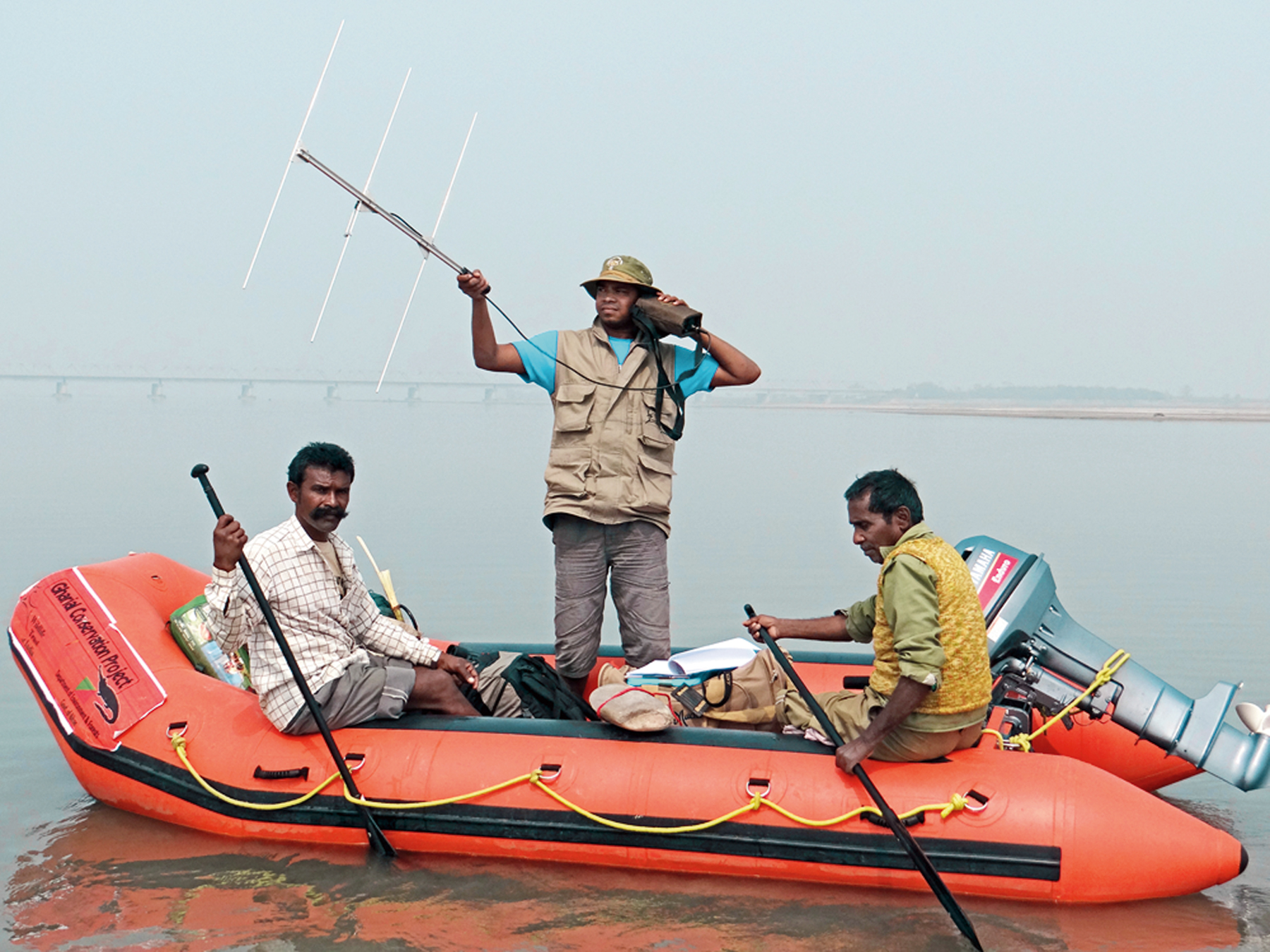 Members of the Gandak Gharial Recovery Project team tracking VHF tagged gharials. Regular surveys have shown that the Gandak’s gharial population has grown steadily since 2015 and the March 2020 survey recorded 259 individuals, making this the second largest population in the species’ range. Photo:Rajkumar/WTI.

We comb gently through braided channels, sometimes powered by the outboard motor, sometimes paddling, occasionally getting off to push or pull the raft through shallow water. We have mist-shrouded days, remnants of winter, and sun-kissed ones, where the gharials glitter olive-gold as they bask on blissful sandbanks. We see Striated Herons and Spot-billed Ducks, and Himalayan Griffons wheeling overhead, and muggers impersonating logs on the riverbanks, and ospreys swooping to conquer, and the perfect grey crescents of Gangetic dolphins. And we count gharials. On February 25, across congregation sites on the Ledhiharwa floodplain, we count 76 – “the largest number we have ever recorded in a single day,” Subrat says.

We make camp on the riverbanks or on mid-channel sandbanks, our tents huddled together in the vast moonlit emptiness of the Gandak’s floodplain. Often, by nightfall, the whooping and wailing of jackals is all the company we have. Sometimes a midnight boat drifts by, bearing liquor smugglers from UP to Bihar – a reminder that these flatlands were once infested with kidnappers and bandits, making surveys like this one impossible.

At our camp on the Ledhiharwa floodplain I am introduced to Jitendra Gautam and Bharat Kumar Ram from the nearby Chilwania village. Just 23 and 18 respectively, these young men were key to the nest and hatchling protection efforts during the lockdown, coordinating with Subrat through video calls. I also encounter the towering figure of Lalsa Yadav, a former bahubali who has been a tiger tracker with the Bihar Forest Department for the last half-decade. Yadav has assisted the Gharial Recovery Project since 2018 and says with beaming pride that he helped rescue 87 hatchlings last year, 76 the year before. (His previous vocation and turbulent reputation have had a knock-on benefit to conservation, I am told: turtle poachers have fled his beat in terror, preferring to fish in calmer waters.) 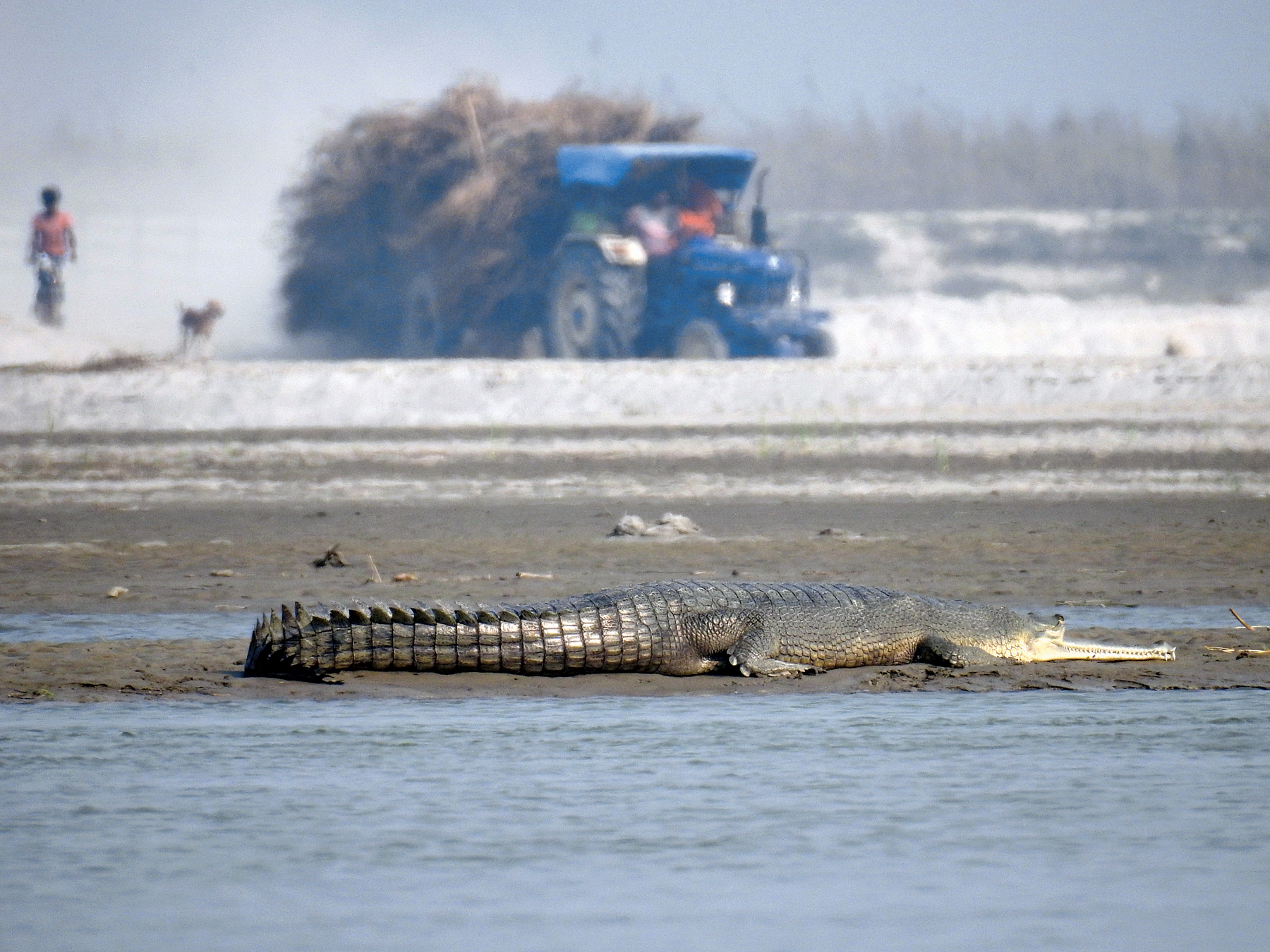 Despite being an important gharial breeding site, the Gandak has not been declared a Protected Area. The river’s gharials face several anthropogenic threats – whether as bycatch in fishing, or due to the destruction of habitats caused by dredging as well as illegal sand and boulder mining. Photo:Pranav Capila.

After a week on the river – 170 km. covered and 180-plus gharials sighted – I leave the survey team at a point just beyond the Mangalpur Bridge. A gharial nest was found on the left bank here last year; scores of hatchlings were rescued and released into the river. Now, I see that workers of the Water Resources Department, Government of Bihar, have planted flags demarcating a portion of the bank to be cut so the river flow can be ‘improved’ – a straight line being preferred to the river’s curve of whimsy. There will be no nesting here this year.

Is there no hope? Well, as you read this, a nesting survey is underway at congregation sites on the Gandak. Over the next two months, conservationists and field assistants, fishermen and farmers and a former bahubali will be on the river, monitoring nests, rescuing and releasing hatchlings. No white flag has been waved. The Water Resources Department has also been approached and is reportedly amenable to changing the timing of barrage water release going forward.

It reminds me of that George Schaller quote – yes, the famous one about there never being victories in conservation, nor the luxury of turning one’s back on a species or habitat that needs protection. Just a fight, forevermore.

Founder-editor of Second Skin Media, an editorial and design agency focused on conservation content, Pranav Capila tells stories about wildlife, wild spaces and unsung heroes on the frontlines of conservation.