If you find yourself in the dry, rocky hills of Tamil Nadu, you may come across a flower that you will likely smell before you see. The putrid smell of decaying flesh wafts in the warm spring air, but do not be mistaken – this is no carcass. You have caught the scent of a centuries-old evolutionary treachery – the flowers of Caralluma umbellata. Deep red patterned petals and hundreds of fine downy hairs complete its disguise: this flower evolved to mimic a rotten carcass.

Of the 10 or so species of Caralluma native to India, C. umbellata is the most striking, yet all of them carry the family trait of malodourous flowers. Collectively called carrion flowers (though this name applies to several other plants as well), they are an example of what biologists call Pouyannian mimicry – where flowers mimic other organisms, or in this case their remains. To understand why this strange appearance has evolved, one must take an evolutionary step back – to the time when some fly and beetle families evolved to depend on carrion. These necrophagous (carrion-eating) insects gradually developed strong in-built sensory mechanisms to seek decaying carcasses to lay their eggs. This ensured that their young would have a plentiful food-source on hatching. The strategy proved so successful for the insects that they became completely dependent on carrion.

Enter, the carrion flowers. The evolution of flesh-eating flies provided them a distinct reproductive advantage in the form of an effective and faithful potential pollinator. Over millennia, through a process of small changes, carrion flowers evolved a complex cocktail of volatile organic compounds (VOCs), which allowed them to mimic the smell of a dead animal. To their pollinators, the downy hairs on their petals resemble mould, or remains of fur. In donning this elaborate disguise, carrion flowers broke the classical plant-pollinator bargain. Most flowers offer pollinators a food source (nectar or pollen) in exchange for pollen transfer. But the deception of carrion flowers was so convincing that they stopped producing nectar altogether – completely duping their insect benefactors. 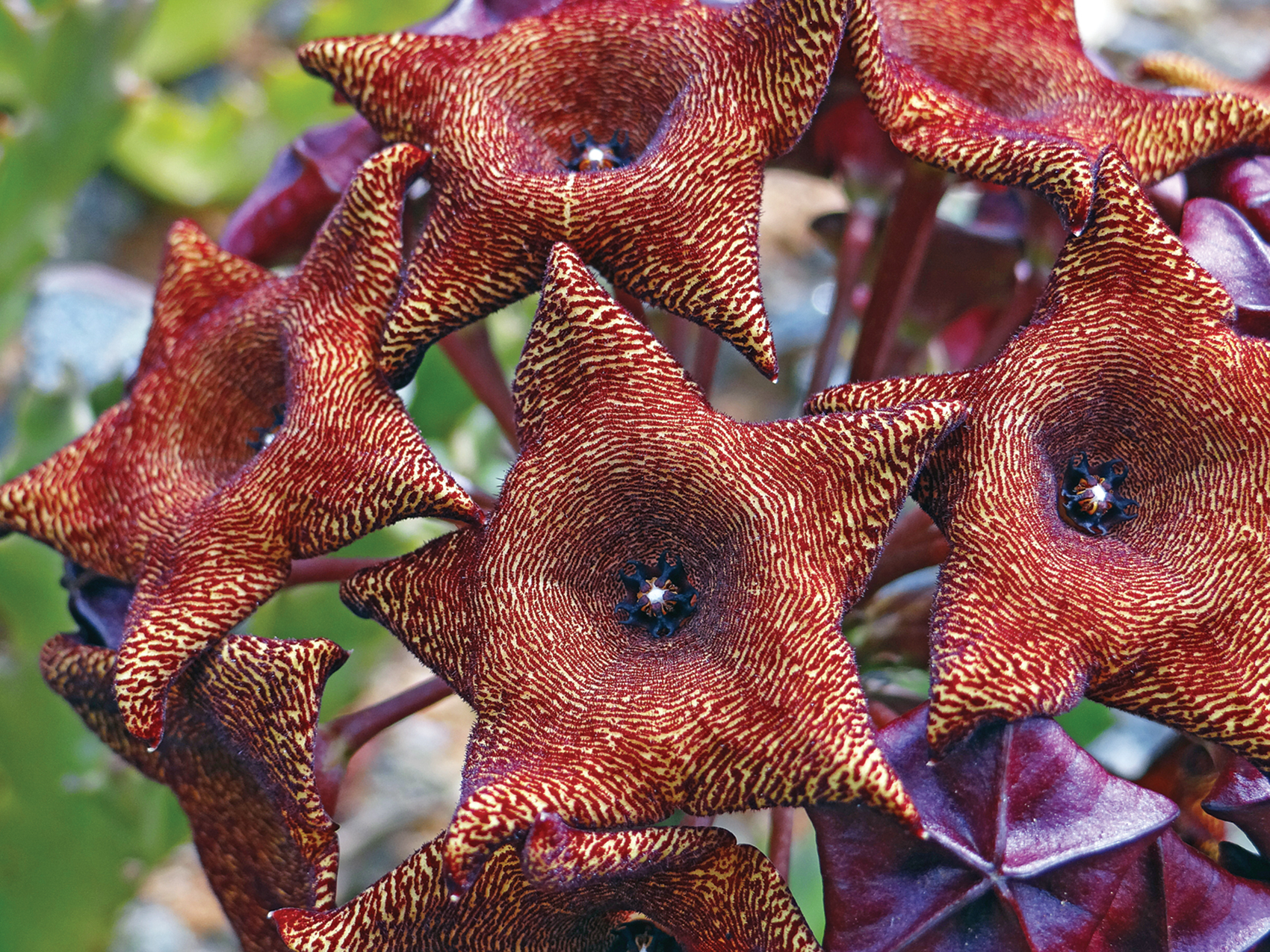 Caralluma flowers evolved their ‘rotting flesh’ stench and carrion-like appearance to attract pollinators such as necrophagous flies and beetles, which lay eggs within the leafless flowers. Photo: Soham Kacker.

But why go through so much (evolutionary) trouble? The most diverse families of carrion flowers worldwide have evolved in similar environments. Most are stem succulents, inhabiting hot and water-scarce regions. Here, pollinators are few and producing nectar-laden, showy flowers is an expensive strain on limited resources. Deception is far more economical. Further, having a small group of specific pollinators increases the chances that the pollen will be transferred to a flower of the same species –  in other words, it maximises reproductive success.

Despite having so many aces up their sleeves, many species of carrion flowers in India are threatened. A cousin of the Caralluma – Boucerosia frerei – from the Western Ghats is listed as ‘Endangered’ by the IUCN, and has recovered from the brink of extinction thanks to ex-situ conservation efforts. Often the rocky, arid landscapes, which host these unique plants are viewed as wastelands, cleared and constructed on. But in fact, it is these conditions which allow evolution to get creative, and produce plants that have been deceiving insects and fascinating humans for eons.

Soham Kacker is passionate about plants and has apprenticed at the Auroville Botanical Gardens and the Aravalli Biodiversity Park. Based in New Delhi, he is currently pursuing a bachelor’s degree in the biological sciences from Ashoka University.